San Francisco studio Natoma Architects has completed a family residence that consists of intersecting volumes, with connections between its planes of concrete and glass designed to look as minimal as possible. 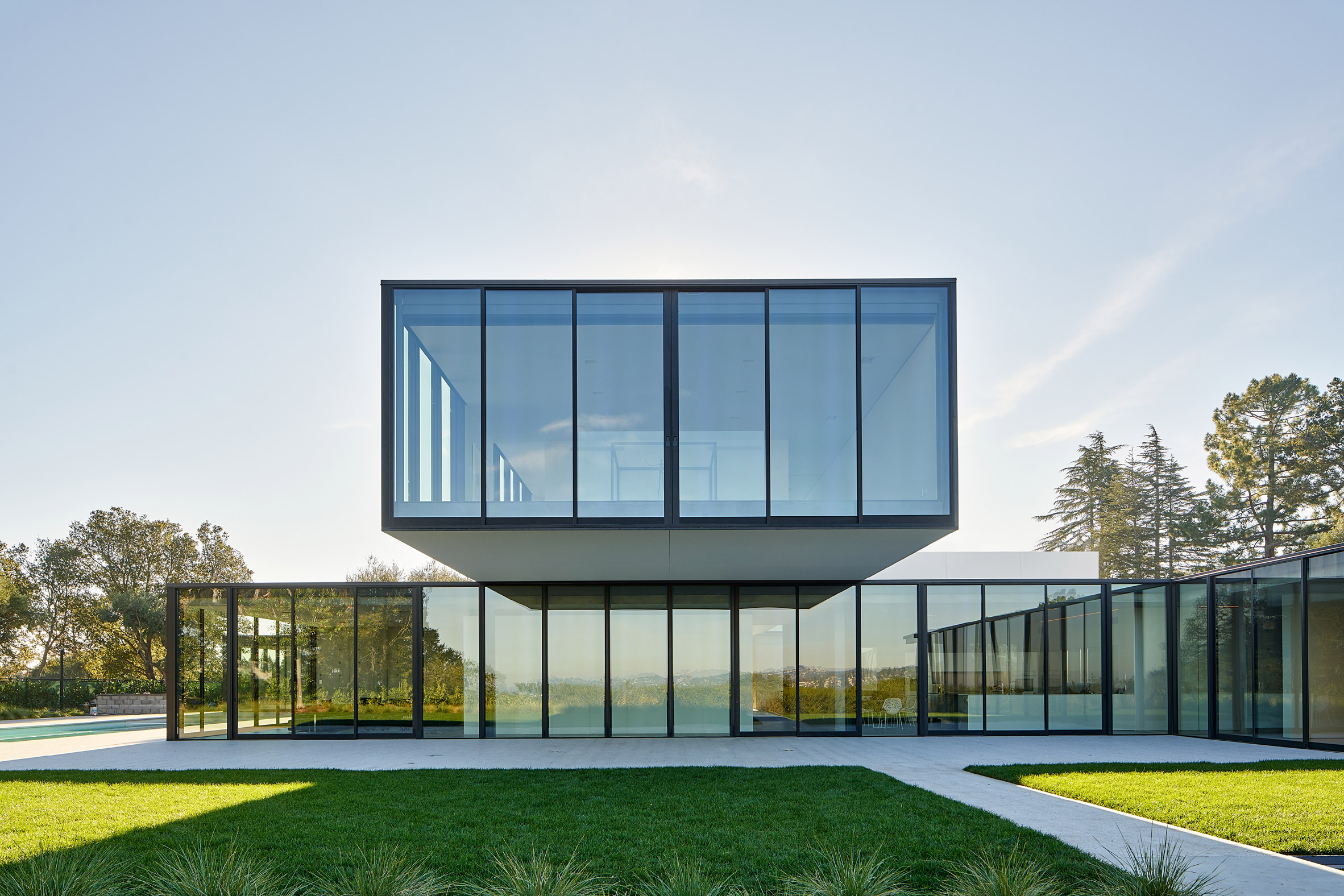 The Oz House is perched on a hilltop in Atherton, California, and is accessed via a winding road. In addition to the main dwelling, the residence features a pool house, guest house and ample outdoor space. 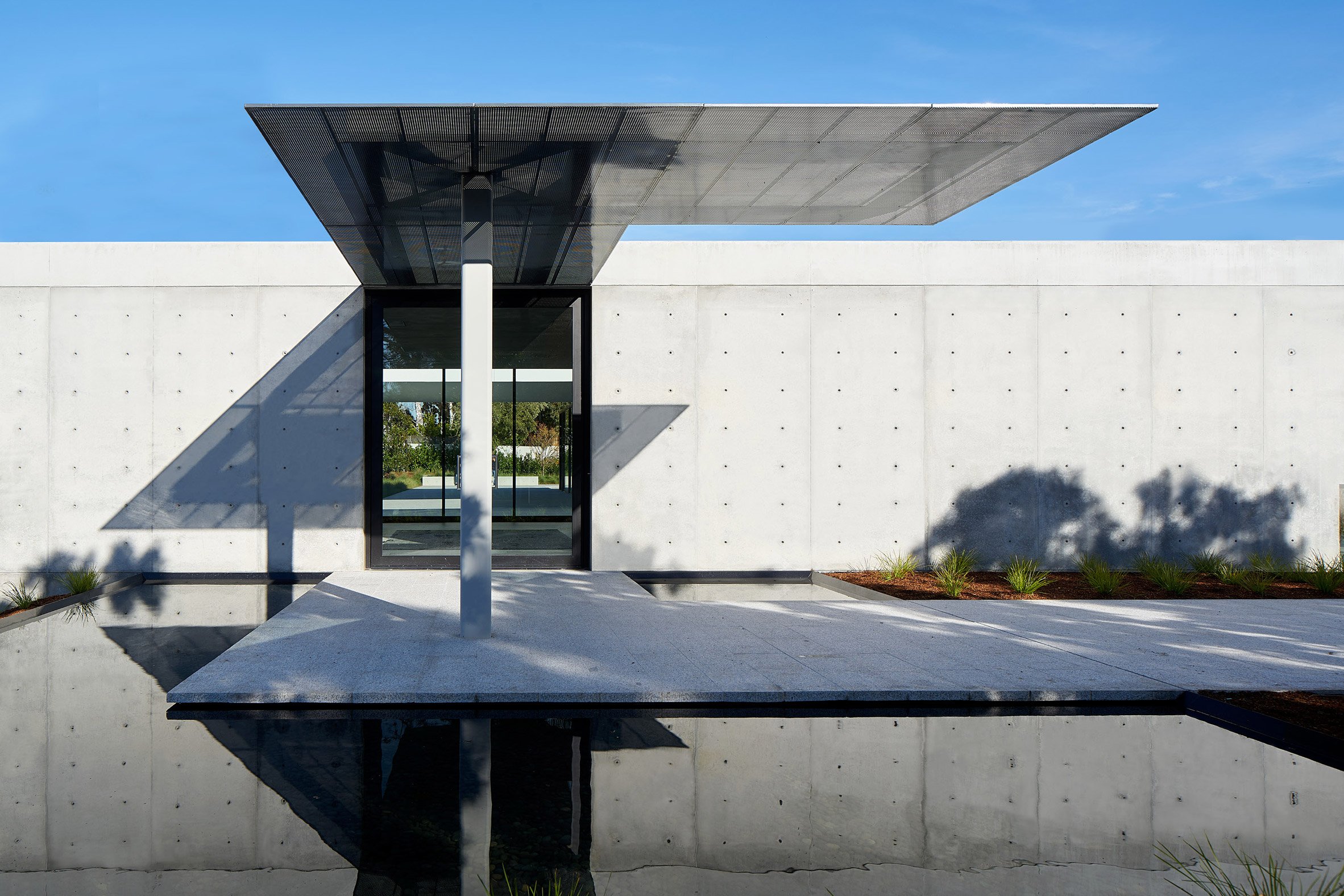 The entry sequence begins at the edge of the property, which is marked by a gate and a concrete wall. A pathway bordered by a reflecting pond leads to the front door, which is shaded by a crisp metal canopy. 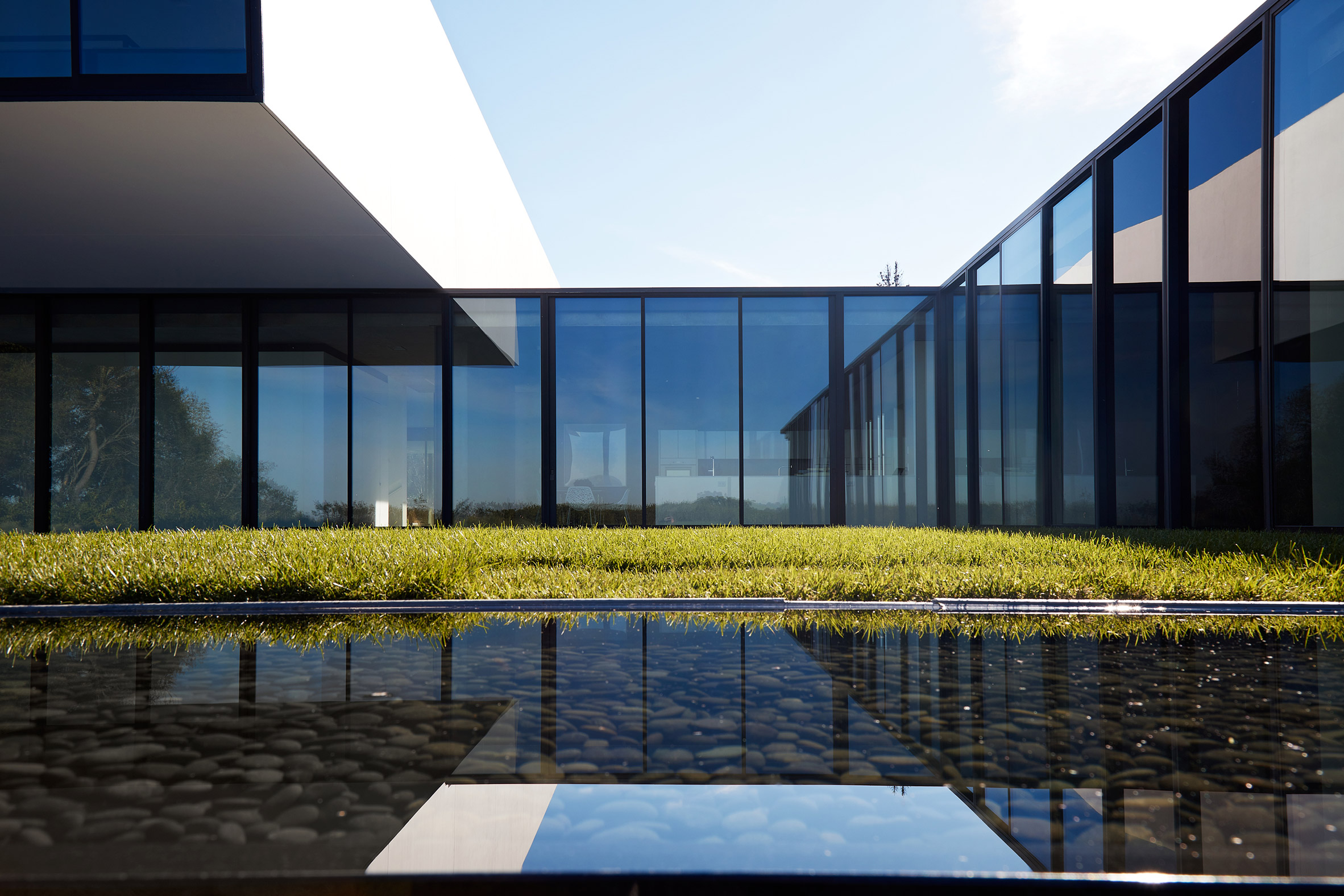 “Once inside, views in other directions unfold, and in the distance, the skyline of San Francisco is framed by the entry canopy,” said Natoma Architects, a studio led by designer Stanley Saitowitz. 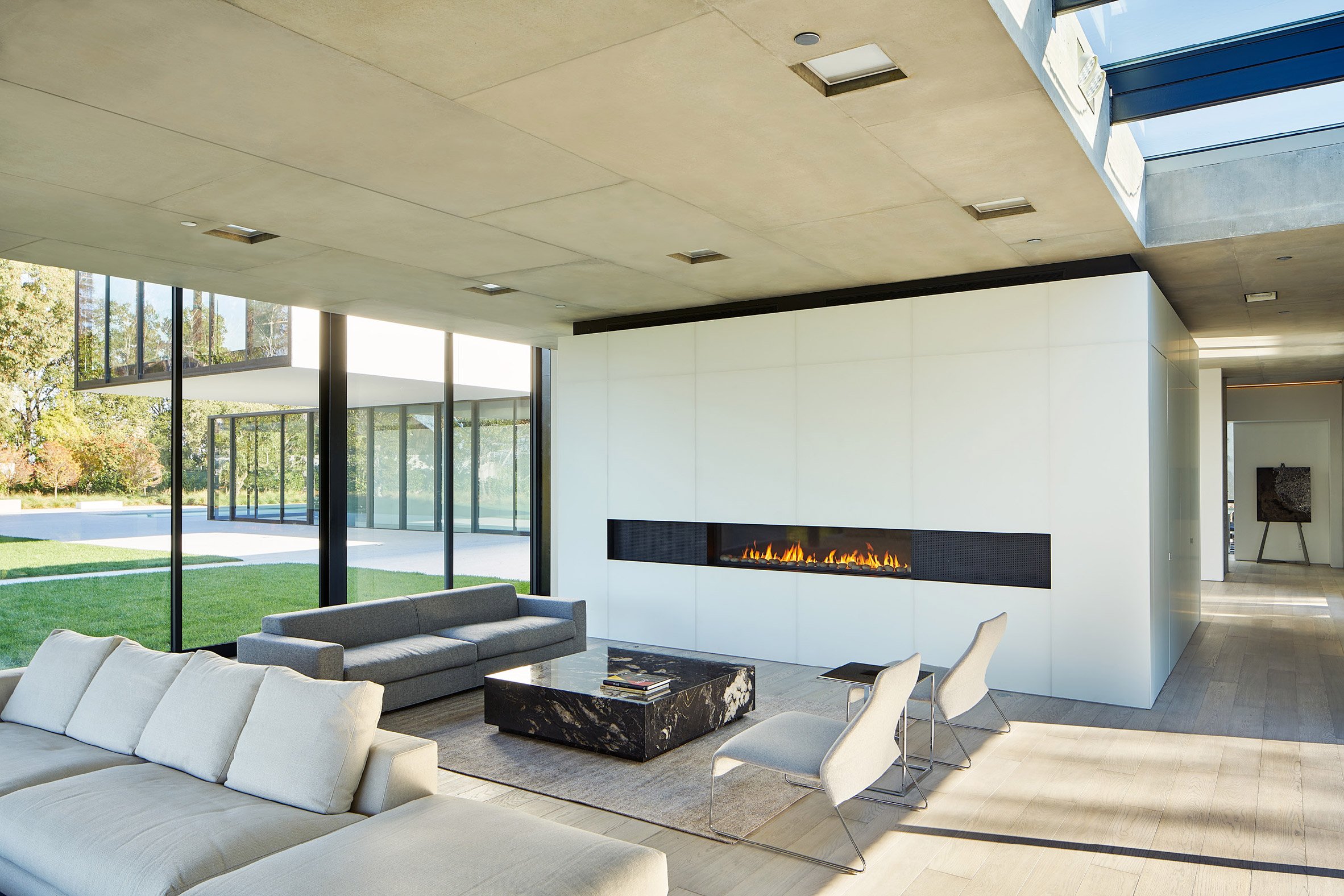 The home is composed of intersecting, L-shaped bars, with one balanced atop the other – a configuration that results in cantilevers, bridges and courtyards. Made of concrete and glass, the rectilinear volumes are designed to “twist and fold, cross and loop, bridge and divide”. 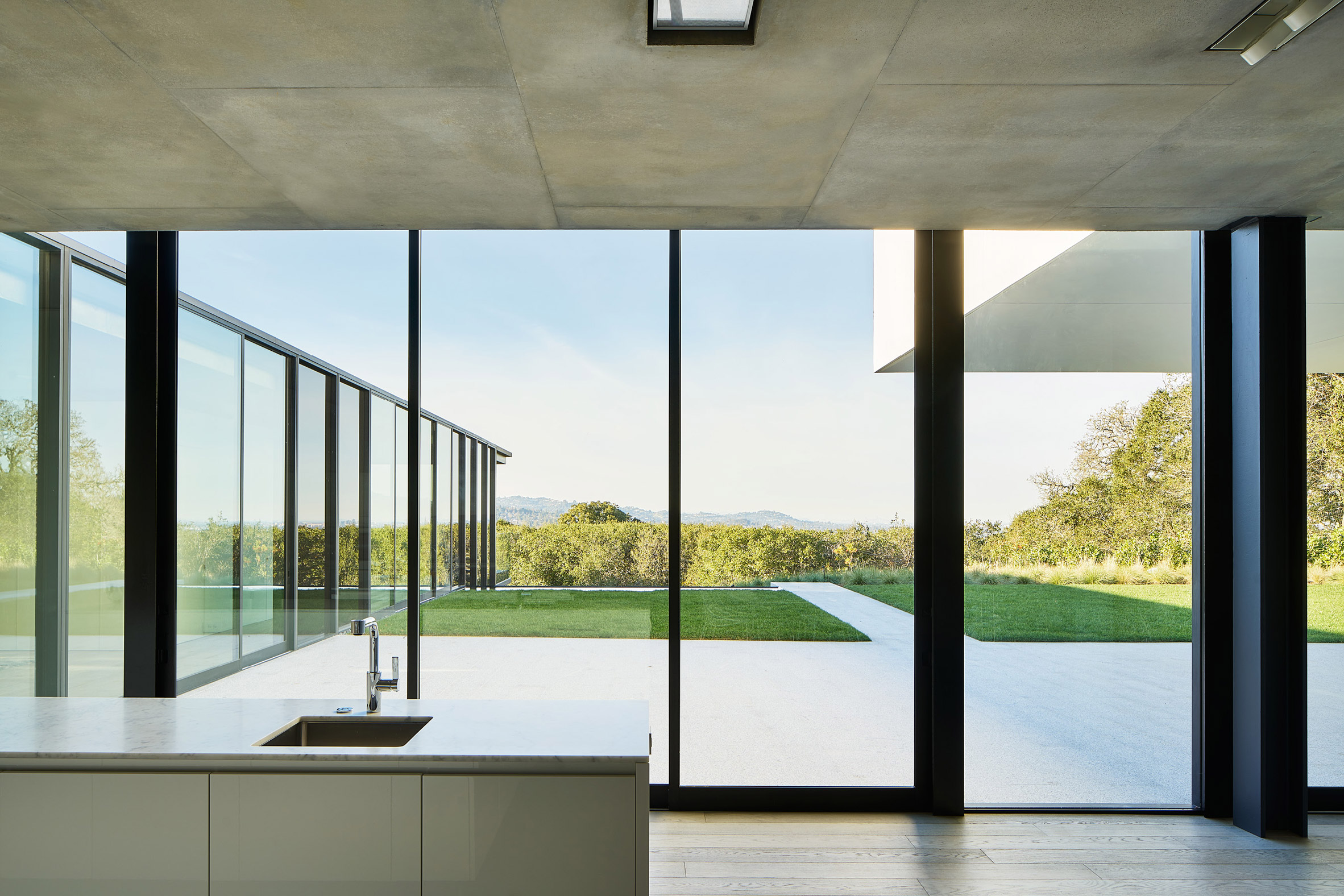 “The interest is in transparency and lightness contrasted with solidity and mass,” the firm said. “The house is a reduced expression of sheer material and absolute form, where connections and intersections are minimised to non-existence, cast almost of a single piece, like an iPhone.” 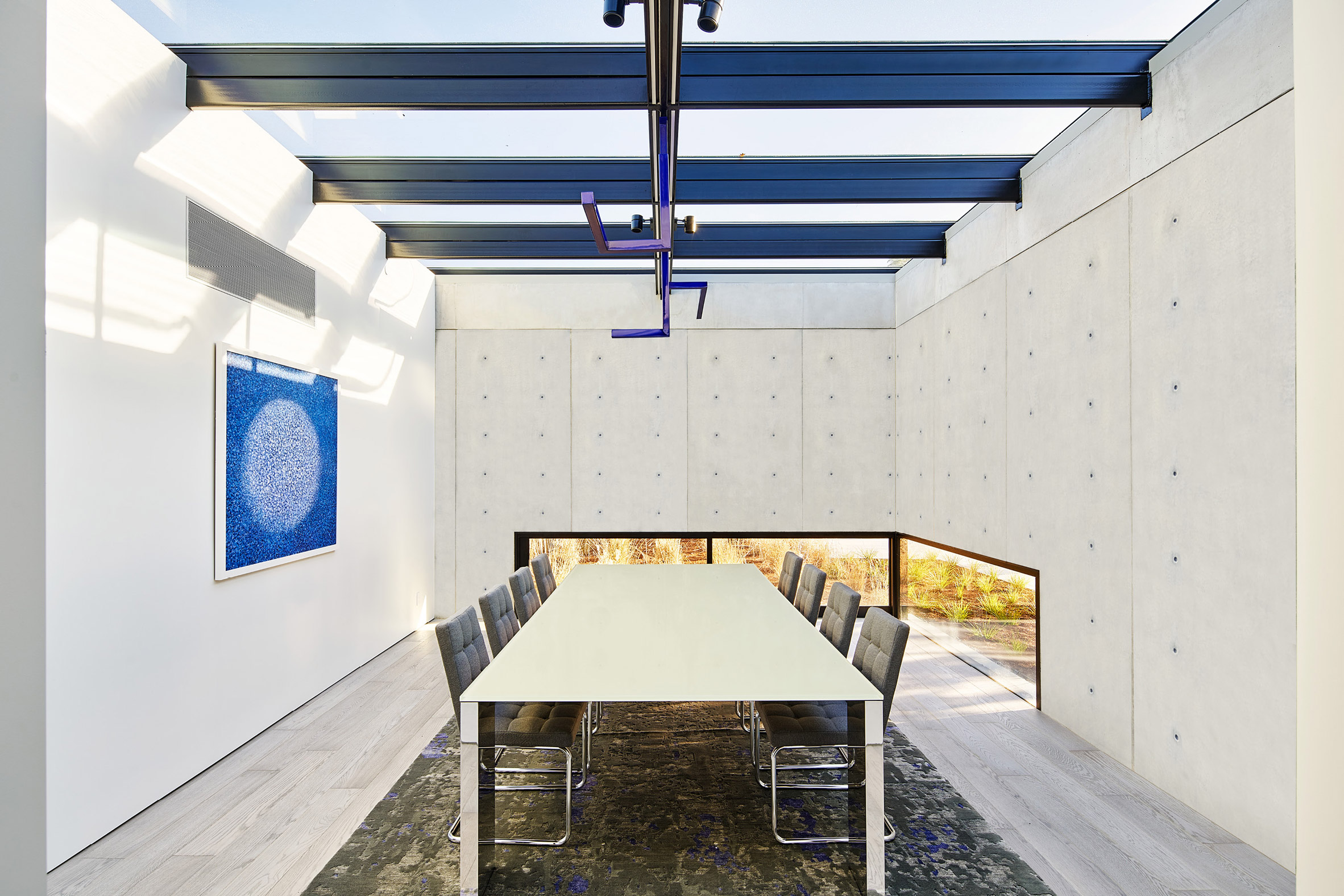 The main level contains the dining room, kitchen and family area, along with zones for formal entertaining. Rooms are imbued with a minimalist aesthetic. 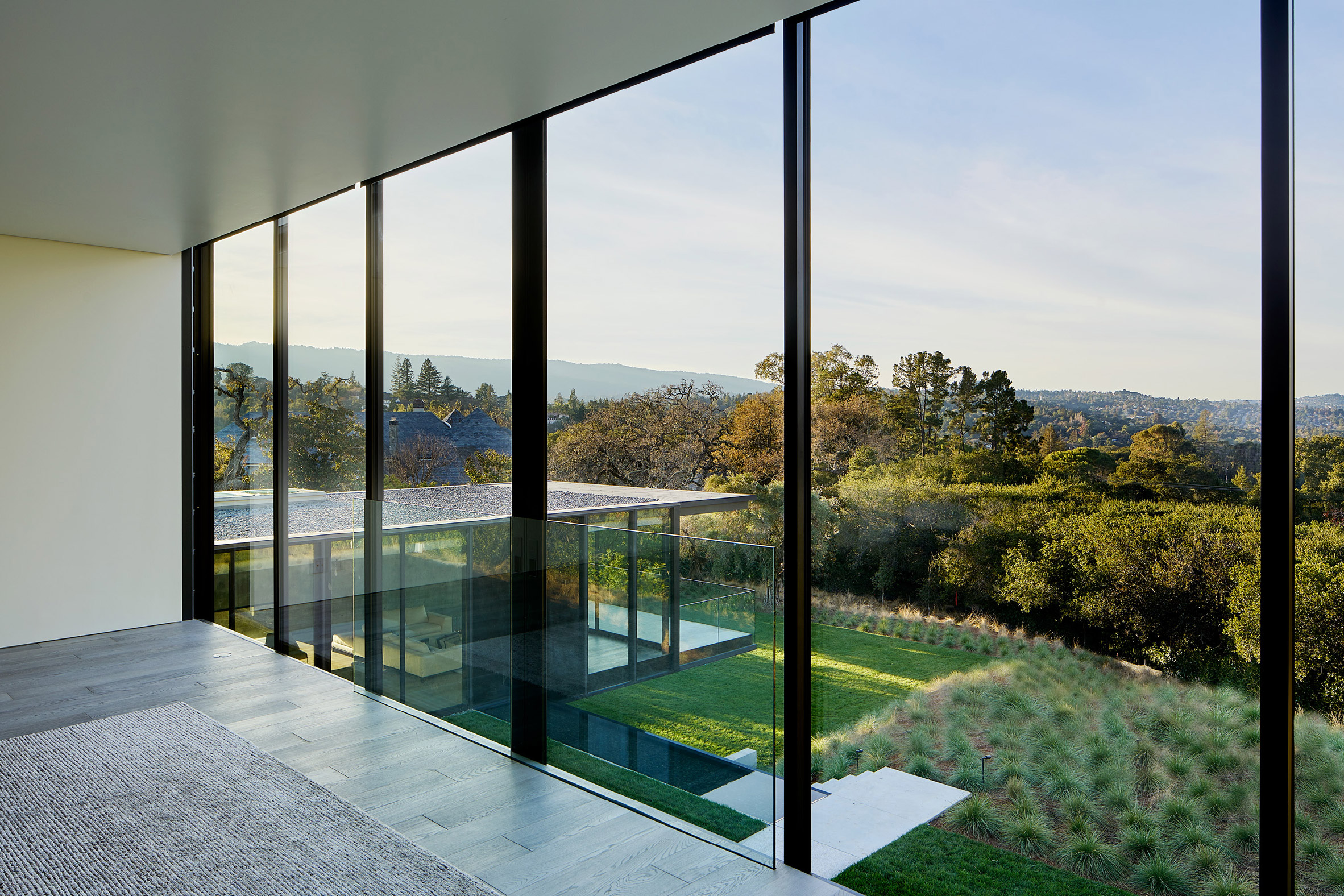 The dining room features concrete walls and a glass ceiling traversed by metal beams. A vivid blue painting adds a pop of colour to the austere space. In the living room, the team used streamlined decor and a neutral colour palette. Set into a white wall is an elongated, horizontal fireplace. 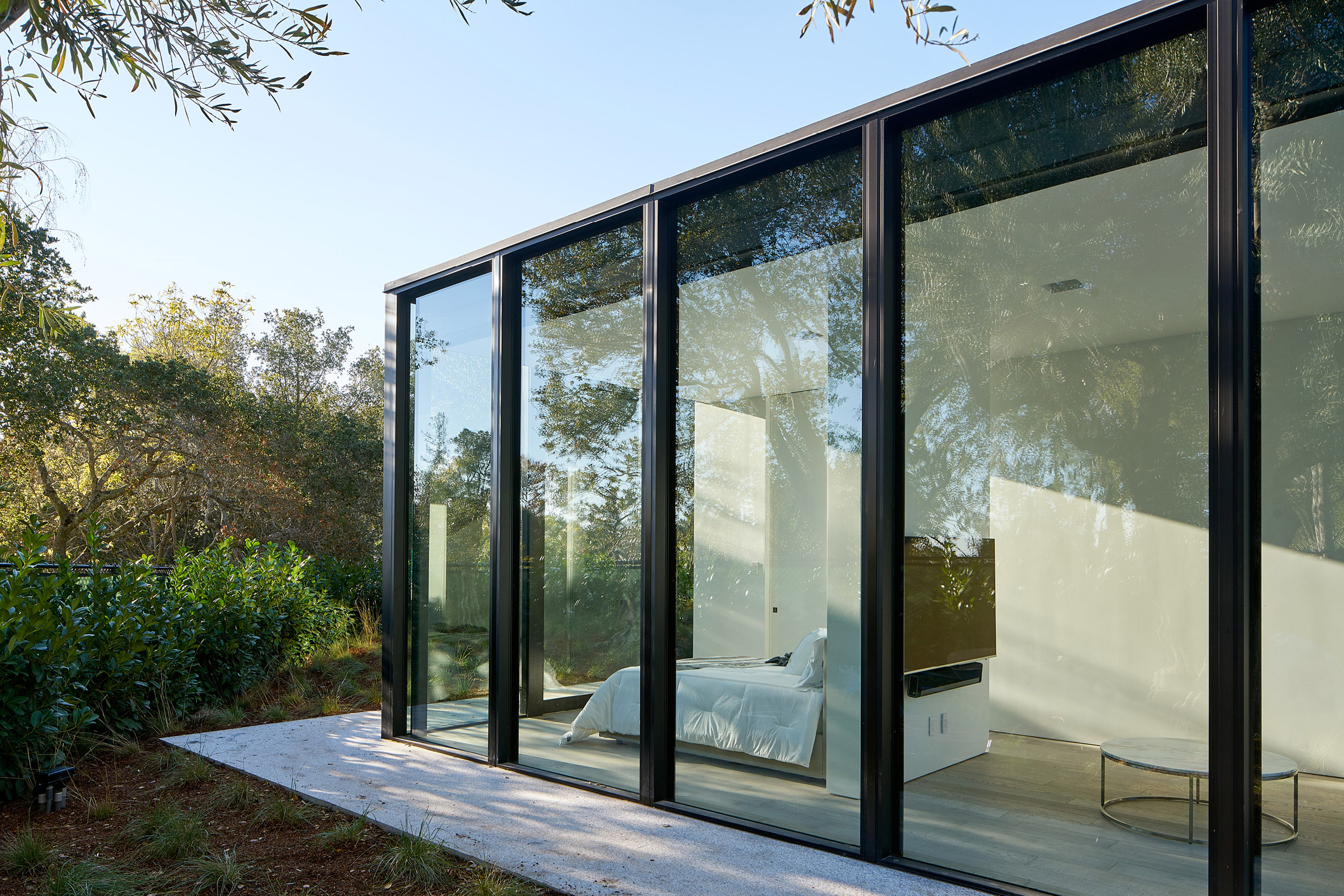 The upper level houses the master suite, which occupies the volume facing San Francisco, located 25 miles (40 kilometres) to the north. The upper floor also contains four bedrooms for children, an office, a sitting area and a laundry room. 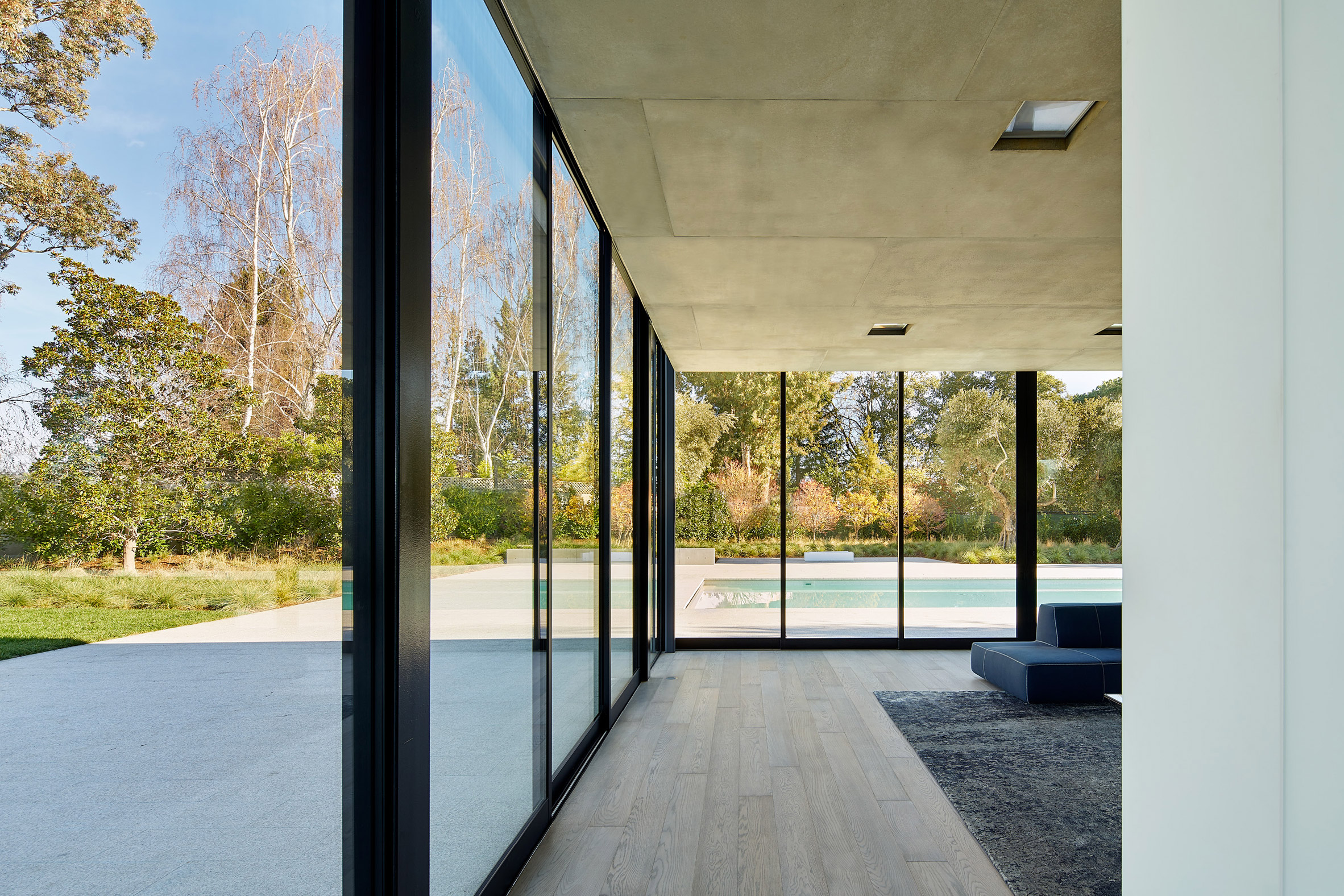 The basement level, which opens onto a lawn, encompasses areas for family play and casual entertaining. Throughout the dwelling, skylights and floor-to-ceiling windows help bathe interior spaces in natural light. 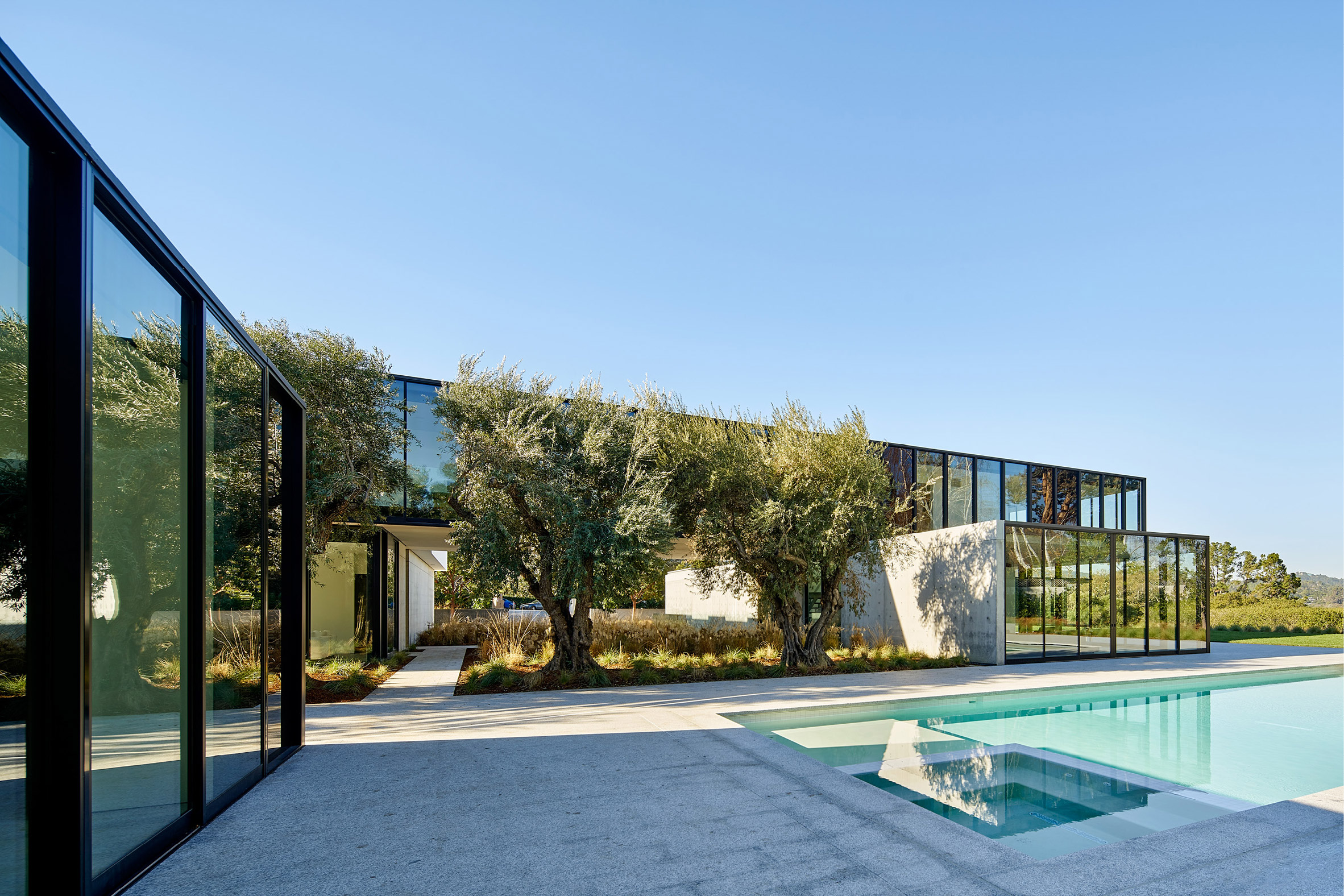 The home is designed to emphasise voids rather than mass. “The building threads and weaves, making holes in things, or making things that make holes in things that are not,” the studio said. “These abstract geologies do not impose, but expose, expanding the realm of space and diminishing the role of form.” 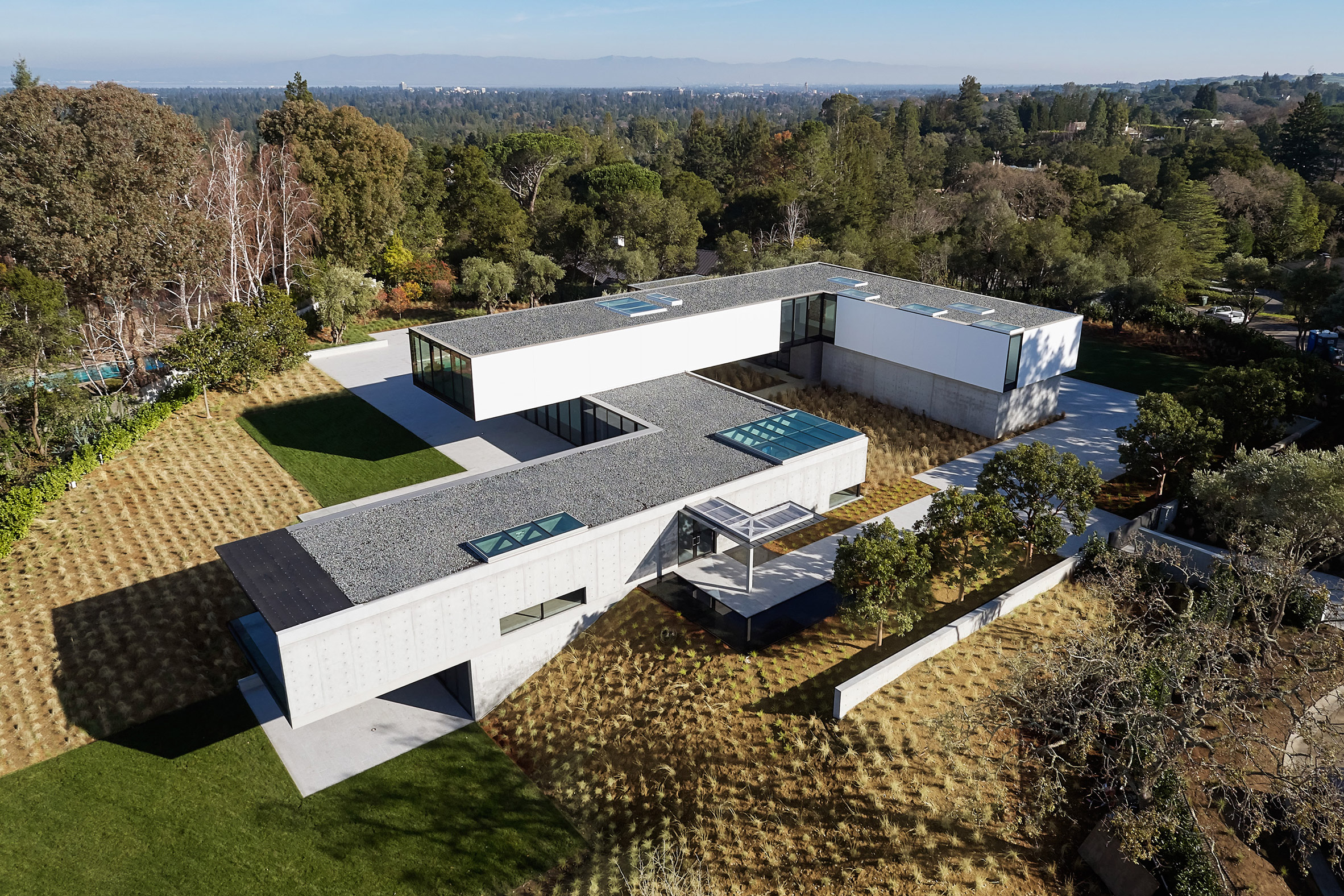 Other projects by Stanley Saitowitz and Natoma Architects include a Jewish community centre in Philadelphia with brickwork modelled after an “abstract menorah” and an art museum in Tampa, Florida, that is wrapped with a perforated metal skin.

Photography is by Bruce Damonte.

The post Materials meet seamlessly “like an iPhone” at northern California home by Natoma Architects appeared first on Dezeen.