White ribbed panelling provides a neutral backdrop for smoked-oak furnishings and marble bathrooms in this former west London office, which McLaren Excell has converted into a family home. 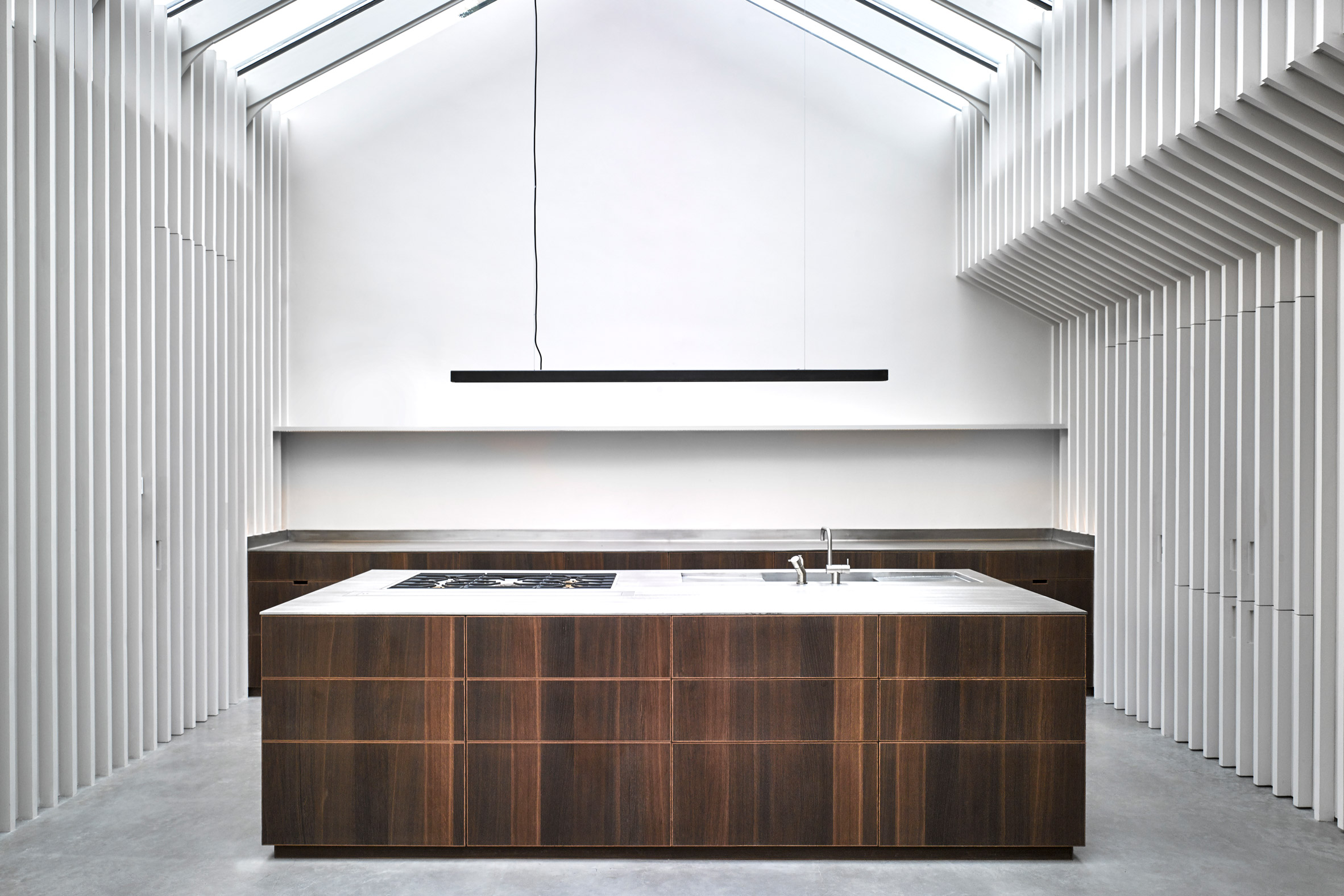 London-based McLaren Excell completely overhauled the two-storey Rylett Crescent building in London’s Shepherds Bush, which was originally an industrial laundry facility before it was converted into offices.

The architects swapped the conventional layout of spaces to create a four-bedroom residence, placing the living areas in the light-filled, double-height first floor, and the bedrooms on the ground floor. “The layout of the building lent itself to a ‘flipped’ arrangement,” studio co-founder Luke McLaren told Dezeen.

“The living areas occupy the light-drenched first floor, with the bedrooms and bathrooms located on the darker and cooler ground floor,” he said. An open-plan, living, kitchen and dining room occupies a 12-metre-long room on first floor, which is topped by a continuous glazed roof light and clerestory windows that flood the space with natural light. 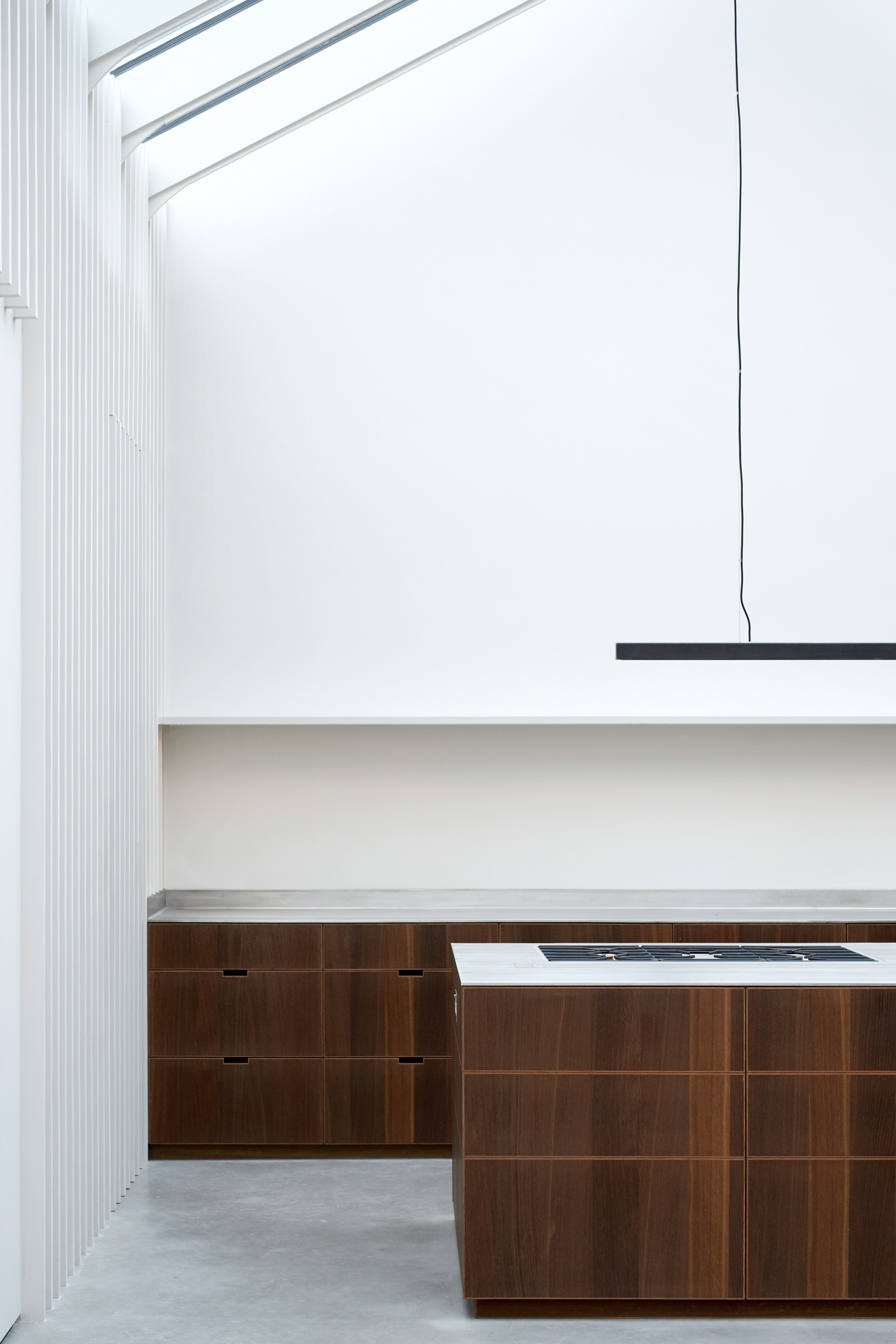 The architects painted all the walls and ceilings white, and lined two of the parallel walls with white-painted panelling, partially covering the windows that run along the top of the wall.

These ribbed panels also front bookshelves built into walls and doorways into the adjacent reading and television rooms and bathroom, adding a sense of continuity throughout the property. Darker furnishings provide a contrast to this blank background, including the dark, smoked-oak kitchen cabinets and storage drawers that are built into walls and the concrete flooring.

“The rhythmic panelling conceals much of the necessary amenity spaces off the central living area and provides a neutral backdrop to the expanse of concrete flooring and beautifully figured smoked-oak joinery,” said McLaren. 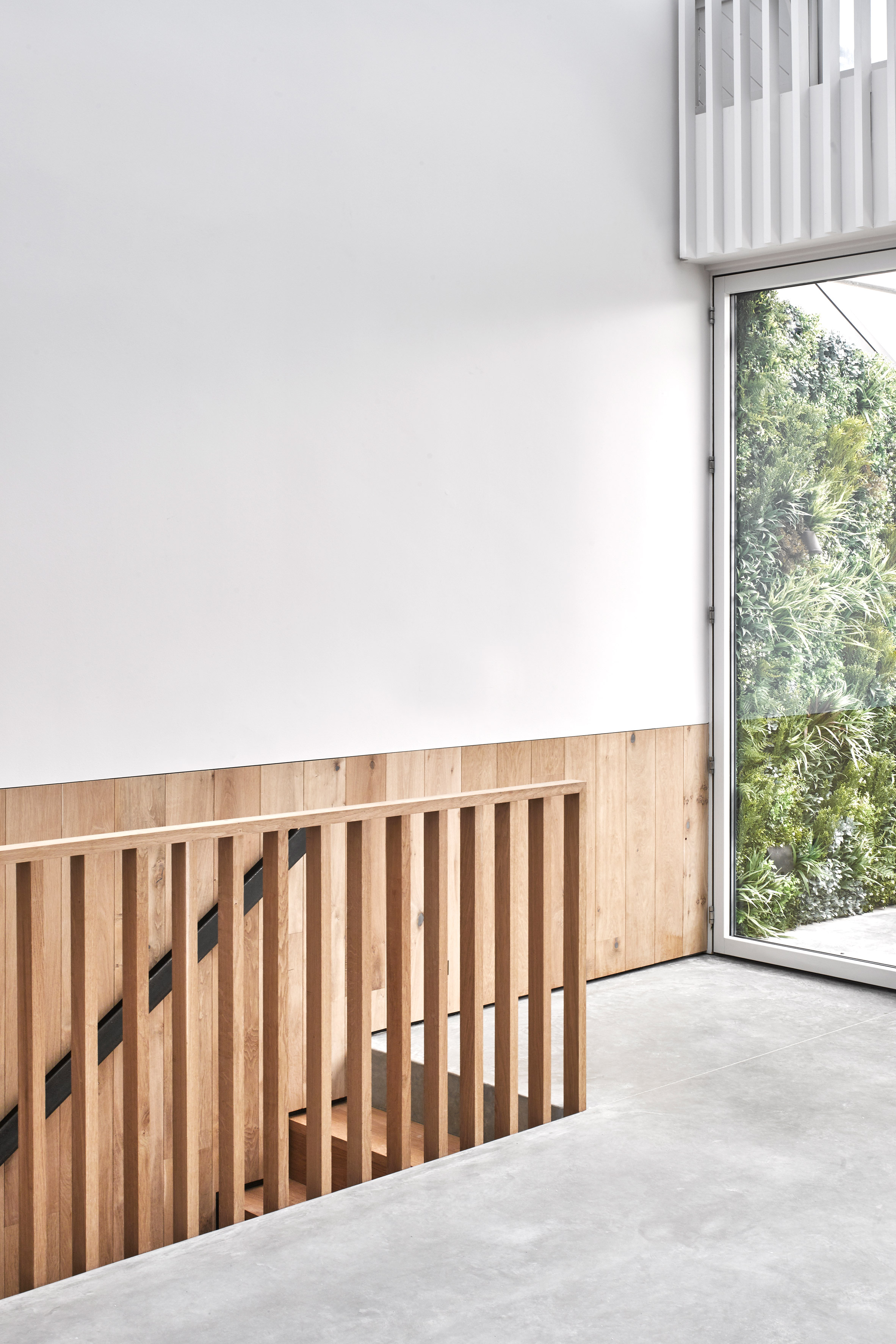 A black, bar-shaped pendant light hangs above the kitchen island – one of the few embellishments to the pared-back spaces. The architects also created a roof terrace in the original volume on this level, accessed from the lounge by a set of glazed sliding doors.

These windows are also intended to bathe the staircase to the ground floor with light. Paler oak panels line the stairs and form the treads, while the banister is made of dark metal. 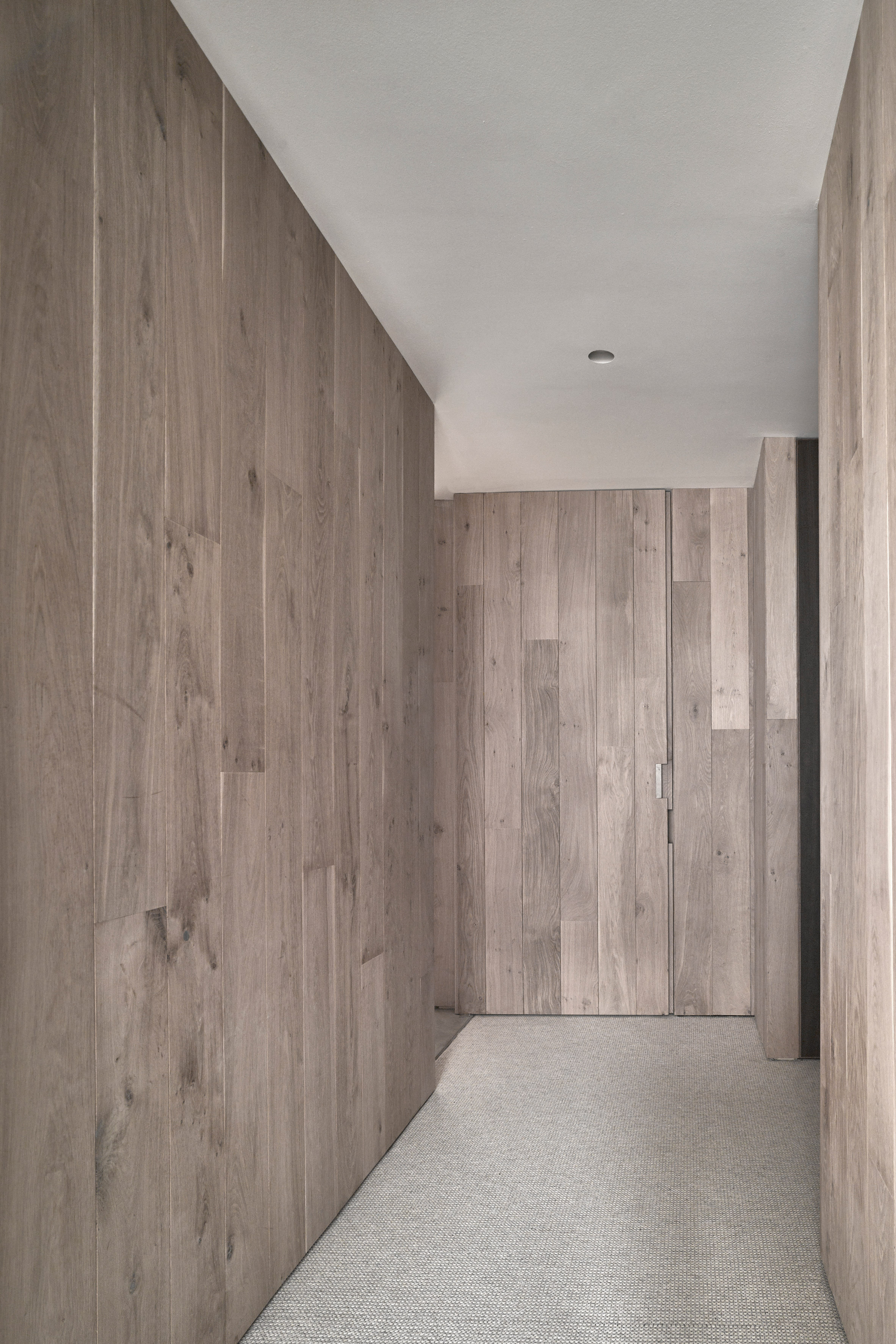 The last few steps are made of concrete providing continuity with the rest of the flooring on the lower level.

Described by the architects as “brooding”, the corridor that leads to the bedrooms is lined with a grey-hued oak. The panels again disguise the doorways only distinguished by bronze handles. 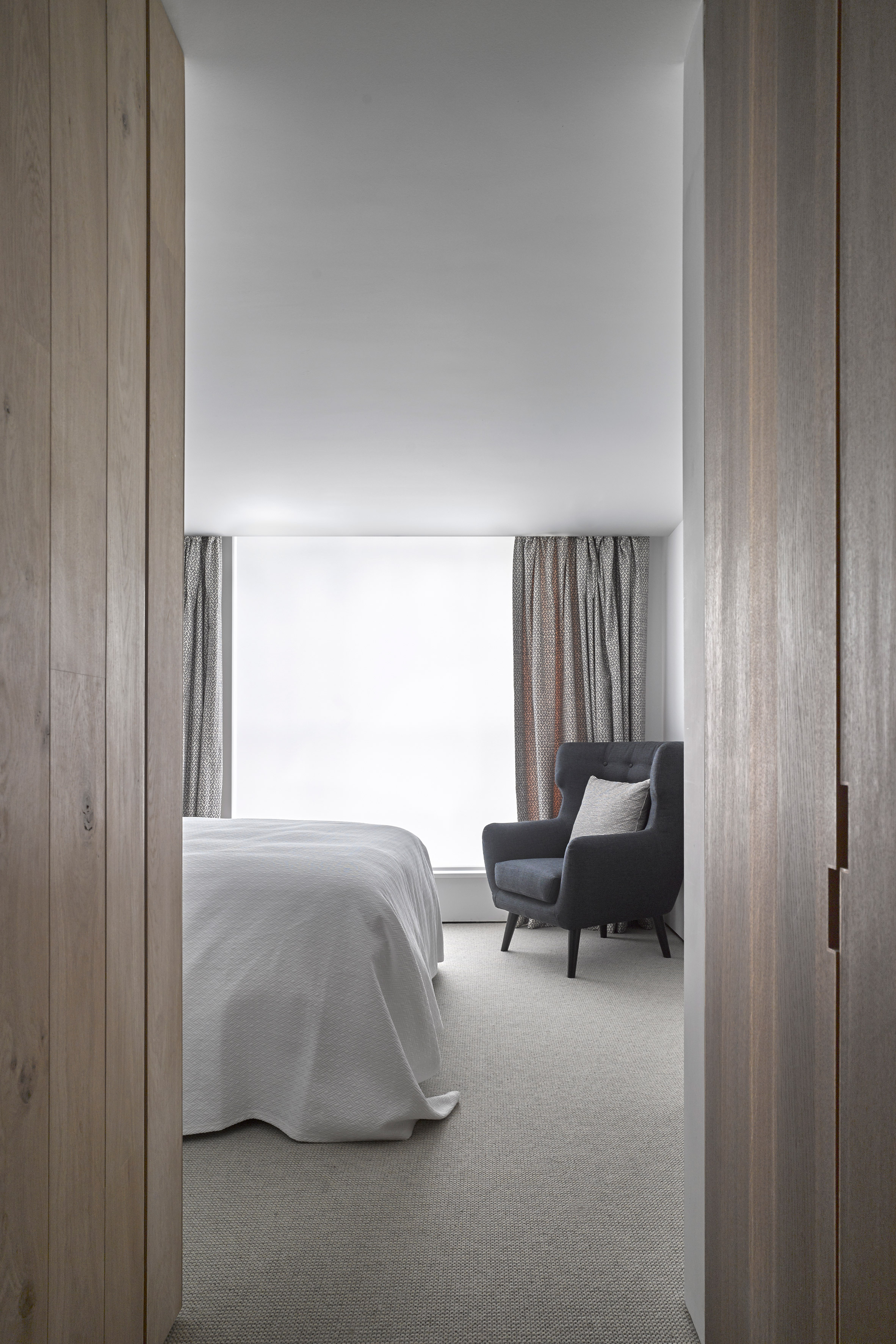 Each of the rooms on this level is finished simply, with white-painted walls and light-coloured carpeting that aim to make the most of the natural light.

In the bathrooms, the white marble walls and bathtubs are complemented by a mix of dark wood and mirror-clad cabinets. McLaren Excell was founded in 2010 by Luke McLaren and Robert Excell. Other projects by the studio include a weathered-steel and concrete extension to a London house and the renovation of a schoolhouse into a home with a “floating” loft room inside. 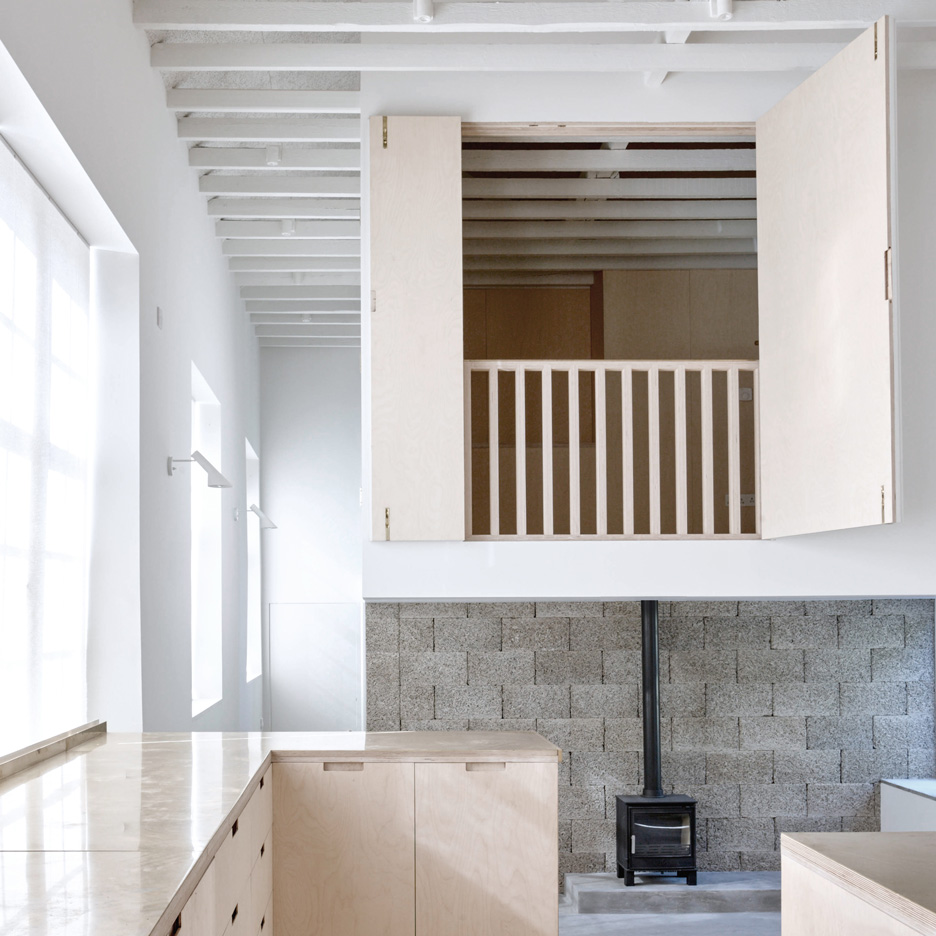 Photography is by Nick Guttridge.