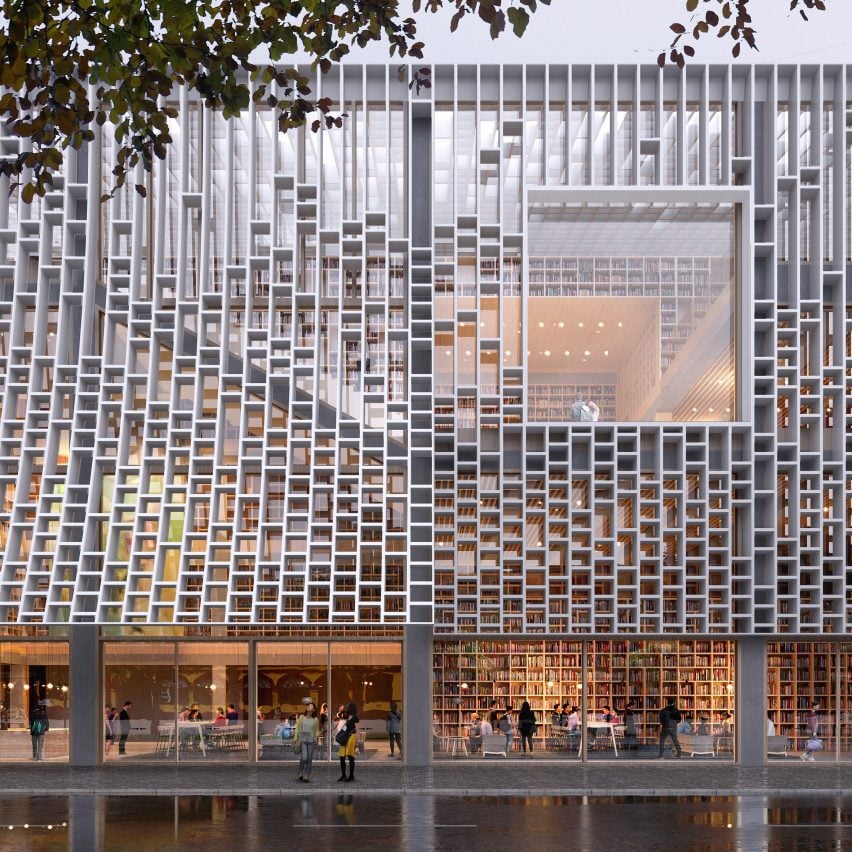 Mecanoo has unveiled its design for Macau‘s new central library, which will have a gridded, light-filtering facade that opens up like a book to a public square.

The Macau Central Library will be built on the Tap Seac square in the historic centre of Macau, a UNESCO World Heritage Site.

Its gridded facade was informed by the exterior of the former Hotel Estoril. The library will be located on the site of the modernist hotel, which was designed by Macau-born Portuguese architect, Alfredo Victor Jorge Álvares, in 1962.

The facade also references bookshelves and will wrap around the building to open “like a book page” at the main entrance of the library facing the square.

Its design allows light to filter into the space, creating a controlled indoor climate while projecting shadow patterns across the interior.

“The facade pattern acts as an extension of the bookshelves, from the inside out, from stack to protective shell,” Mecanoo said. “The uniform skin wraps the library volume and opens up like a book page to the main entrance facing the Tap Seac square.”

“This welcoming gesture is an essential part of the relationship between the library and square.”

As well as the library, the 15,000-square metre design will also include spaces for exhibitions, a cafe and offices.

Netherlands-based Mecanoo was selected by the Cultural Affairs Bureau of the Macau SAR Government to design the Macau Central Library, which the studio hopes will influence the adjacent square.

It planned the library so that users will be able to experience the design through a series of interconnected spaces, guiding them from the square through to the large reading rooms at the top of the building.

“Rather than imagining the new Central Library simply as a cultural destination in Macau, Mecanoo’s design proposal is built around the idea of creating a journey,” the studio said.

Mecanoo’s design will also preserve a futurist mural depicting Fortuna, the Roman goddess of chance, which had a prominent place on the facade of the Hotel Estoril and will now be integrated into the lobby of the Macau Central Library.

A large atrium will open up the interior to showcase the different functions and activities within the building, while openings in walls and between bookcases will provide views out to the Tap Seac Square.

“While clearly a contemporary structure within a traditional context, the new Central Library will provide a forward-thinking platform for influencing its surroundings.”

The current central library of Macau is located near Tap Seac Square and will serve as an archival library once the design for the Macau Central Library is completed and in use.

It has recently completed the Tainan Public Library which the studio wrapped in decorative aluminium cladding, and in 2019 it built an angular red cultural centre in China.