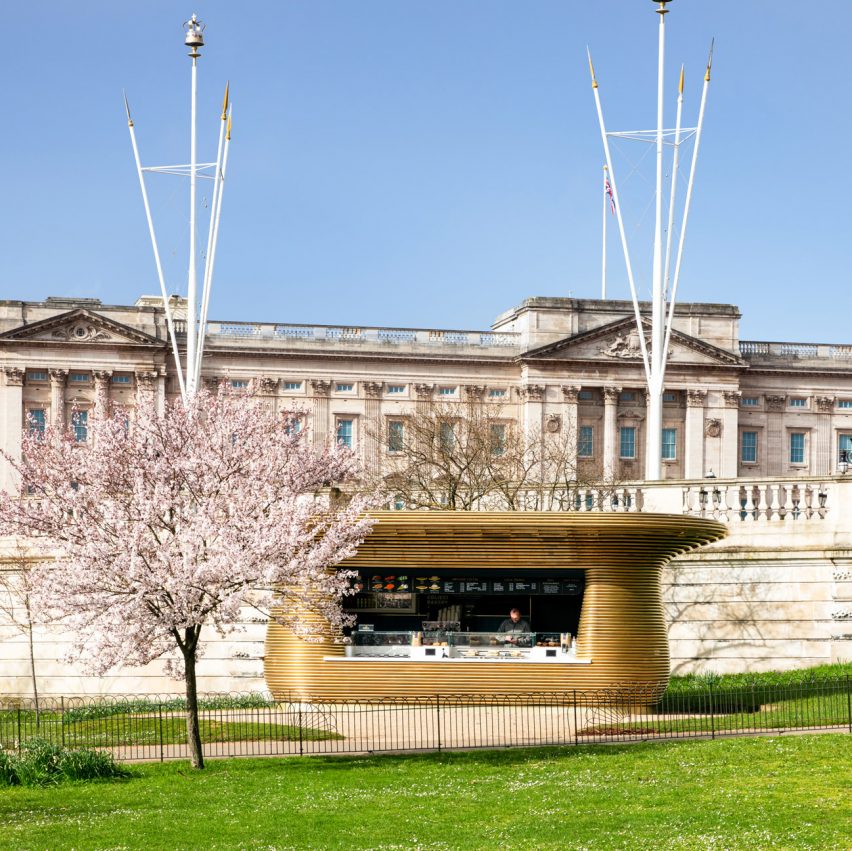 Design practice Mizzi Studio has designed a brass coffee kiosk next to Buckingham Palace as part of a series of drinks stands placed throughout London‘s Royal Parks.

Built in St James’s Park close to the Buckingham Palace royal residence, the Horseshoe Bend Kiosk is one of nine pavilions designed by the studio to replace dated structures in central London.

To mark its prominent position alongside the royal palace, Mizzi Studio wrapped the kiosk in bands of brass to give it a golden appearance.

“The Horseshoe Bend Kiosk is the finale of the fleet’s design – it takes the fundamental DNA of the rest of the kiosks and adds a sense of nobility,” said Mizzi Studio founder Jonathan Mizzi.

“Its position beneath the palace allows for this amplification,” he told Dezeen. “We wanted to create a lustrous, eye-catching footer to a building that is already so ingrained in people’s minds.”

The kiosk has a curved form that matches the other eight pavilions that have been erected across Hyde Park, St James’s Park and Green Park.

However, unlike the other kiosks, which were enclosed in steam-bent English oak designed in collaboration with British designer Tom Raffield, the Buckingham Palace kiosk is wrapped in tubular brass.

“The crucial difference is its material – the kiosk’s cladding is formed out of brass as opposed to steam-bent timber like the rest of the units in the fleet,” said Mizzi.

“We did this to echo context. The Horseshoe Bend Kiosk mirrors some of the opulence of the Palace, yet it does so in an approachable, inviting way.”

Built to house a coffee, food and drink kiosk operated by cafe operator Colicci, the stand has a large serving opening at its front as well as a small hatch on the side.

The curved form, which was derived from the shape of the park’s trees, forms a small canopy over the serving hatches.

“We wanted to create a series of kiosks that didn’t only work as refreshment pit-stops, but as bold, wayfinding landmarks, so we created designs for a fleet of functional, tree-like sculptures,” explained Mizzi.

“Their shape, materiality and texture needed to feel organic – an extension of the parks’ own ecosystem. For this reason, they take on a natural, bulbous shape, with a canopy that curves up and outwards like a tree.”

Mizzi hopes that the recently opened pavilion will be enjoyed by Londoners and visitors to the city using the parks, as coronavirus restrictions in the UK ease.

“Right now, we really believe Londoners need their spirit and confidence renewed,” he said. “With the weather warming up and restrictions easing, we feel as though this final piece has a role to play in uniting people and building a new sense of joy.”

“We hope to have created an emblem of a bright, optimistic future,” he continued.

“Its location right beside a building that symbolises history and tradition, and the contrast that that brings, adds to the positive impact we hope it will have.”

Along with the nine coffee kiosks, Mizzi Studio also designed a cafe with a roof shaped like a stingray alongside the Serpentine lake in Hyde Park.

The post Mizzi Studio builds coffee kiosk with "a sense of nobility" alongside Buckingham Palace appeared first on Dezeen.