Mizzi Studio has designed a glazed pavilion with a swooping brass-coated roof for a cafe opposite the Serpentine Gallery in London.

Artisan coffee brand Collici commissioned the London-based architectural design studio to create the cafe, as well as nine other free-standing coffee kiosks that will be dotted around Hyde Park, Green Park and St James’s Park.

“The design challenge was to create a family of functional sculptures with a goal to continuously surprise and delight while further enhancing the visitor’s experience,” said architect and founder Jonathan Mizzi.

For the Serpentine cafe, Mizzi Studio collaborated with engineering firm Arup to design the pavilion, which will have a glazed facade underneath an overhanging roof made from powdered brass and glass-reinforced plastic (GRP).

“Sensitivity within this beautiful context is key, and extends to the engineering and construction,” said Arup.

“A lightweight box floats above nearby tree roots, while supporting the elegant, curving timber and GRP roof.” 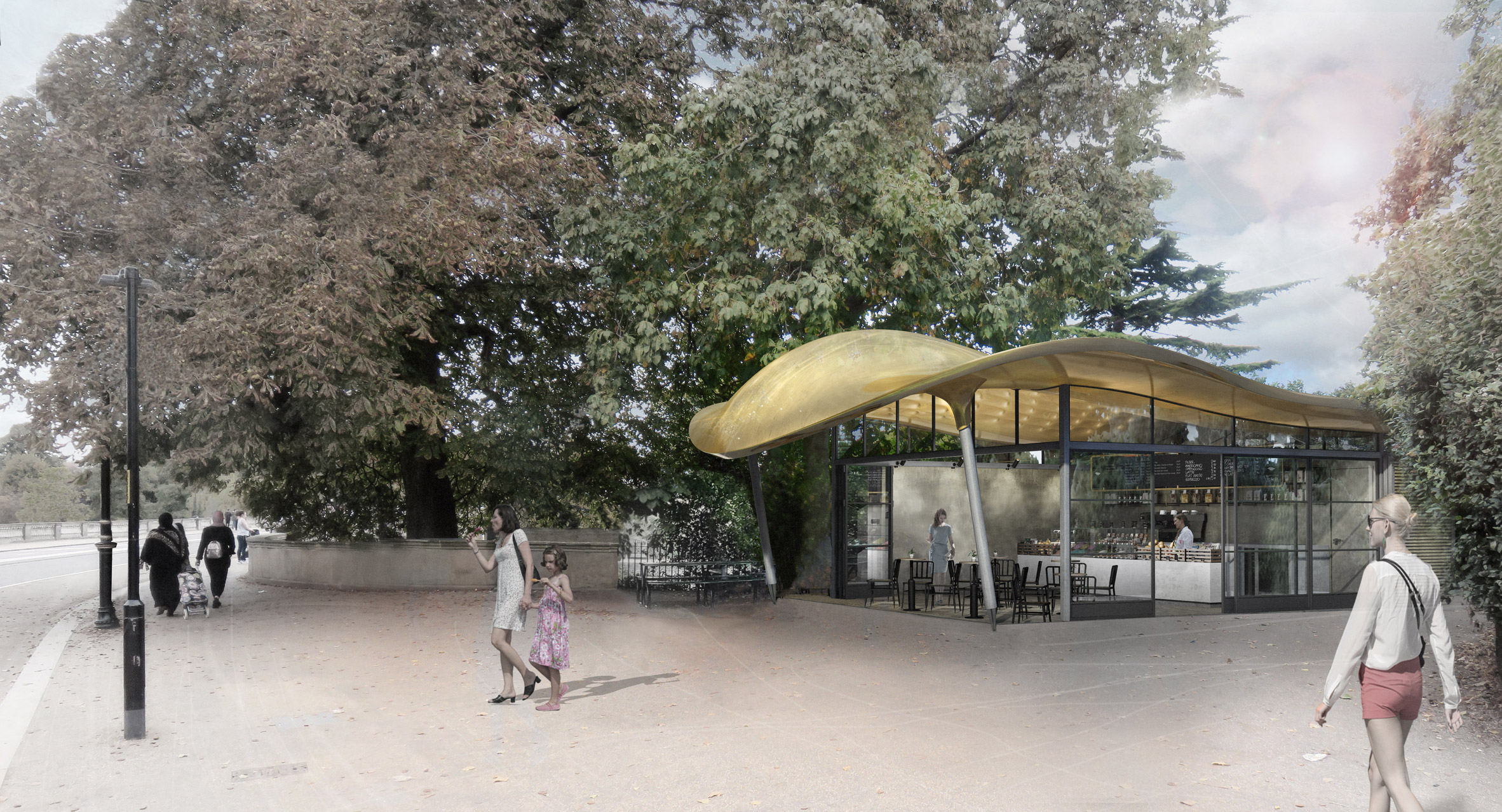 The GRP, which is a type of fibreglass, will be coated with a gel formed of 75 per cent brass dust, giving the roof the metallic and cool-to-the-touch feel of cast brass without the restrictive cost and weight.

Slanting support columns underpin the roof, which forms an awning over the entrance and a sheltered terrace at the rear, where visitors can enjoy their beverages with a view of the park.

Japanese tea pavilions, a stingray in flight, and the shape of the lake itself were cited by the architects as references for the form.

The curving shape was also informed by Zaha Hadid Architects’ rippling white extension to the Sackler Gallery, which stands nearby, and Patrick Gwynne’s Serpentine Dell Restaurant, built in 1965, which is now the Serpentine Bar & Kitchen.

Mizzi Studio’s Serpentine cafe will sit on the site of Gwynne’s larger Serpentine Restaurant. Built in 1964 from interlocking concrete blocks with distinctive rooftop glass pyramids, it was unfortunately demolished in 1990.

The new cafe will be opposite the Serpentine Pavilion, which has been designed by Mexican architect Frida Escobedo this year. For the 2018 pavilion, Escobedo built a latticework of concrete tiles encircling a secluded courtyard with a pool of water under a curving mirrored ceiling.

Earlier the week, the artist Christo unveiled his first major UK sculpture, a 20-metre-high tower of 7,506 painted barrels floating on the Serpentine lake.