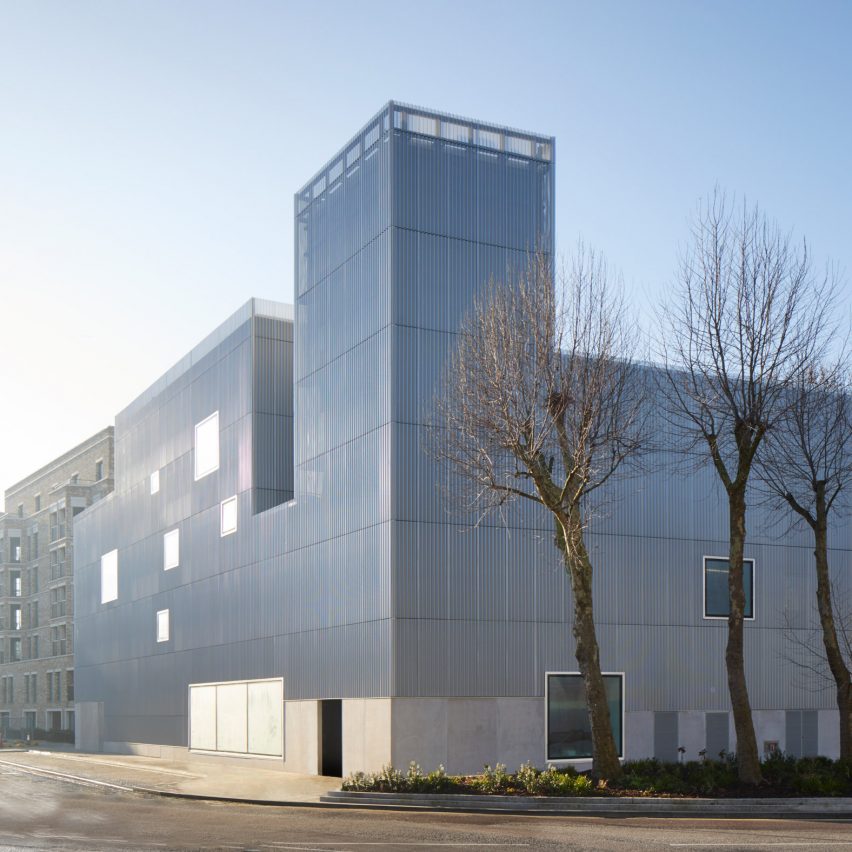 Architecture studio Morris + Company has built a sculptural block wrapped in anodised aluminium that contains an energy hub, cafe and nursery at Elephant and Castle, London.

The studio designed the multifunctional block to stand out from the residential, brick-faced buildings that surround it and which it provides with power and hot water.

“The core concept of the design was to express the hybrid programme in an engaging way,” said Morris + Company founder Joe Morris.

“The energy hub seeks to stand in contrast to the adjacent buildings, to express its identity clearly and act as an anchor point in the master plan,” he told Dezeen. “It does so in its materiality, its form and the loose configuration and size of windows.”

The combined heat and power facility, which provides energy to 3,000 homes, occupies the first floor and half the ground floor, which it shares with a community cafe positioned alongside a small park.

Above this, a nursery that opens out onto several large terraces occupies the building’s upper two stories.

Morris + Company aimed to both express and hide the block’s unusual combination of functions.

“We strove to conceal the hybrid nature of the building’s wide and varied programme into one sculptural and engaging whole, wrapping the parts in a continuous perforated skin of anodised aluminium,” said Morris.

“This skin is punctured in places by large-format flush bonded windows to emphasise internal functions. Whilst in other parts, the skin wraps over the same internal programmes, concealing them.”

Set on a concrete plinth, the entire building, including the corner tower containing a chimney, is wrapped in a translucent skin of anodised aluminium.

This is broken by windows of varying sizes with several feature windows designed to give glimpses inside and mark the building’s various functions.

The power plant machinery can be seen through a long window on the street side of the building, while the cafe has views out onto the park.

Other windows are hidden behind the aluminium skin.

“This design strategy ensures that the precise internal adjacencies are harder to distinguish, meaning the building reads as a singular sculpted form, rather than a composition of expressed programmes,” explained Morris.

“What we are hoping is that the articulation of the form through material and windows encourages people to engage with it and the new pocket park it frames, including a massive landscape format window revealing the energy plant.”

Although Morris + Company didn’t intend to reference the area’s distinctive name – Elephant and Castle – Morris acknowledges that the colour and massing evokes the appearance of an elephant.

“The colour and form of the building emerged through a process of iteration, which was open, expansive and drew upon a wide range of model making techniques,” said Morris.

“At no point was an iconographic narrative placed within the process. However, the result has been described as part Elephant and part Castle, and perhaps on a subconscious level, we have been influenced by the strong cultural reference point of this important London hub.”

Morris + Company is a London-based architecture studio founded in 2018. The studio has previously completed a brick retirement home in Hampstead and a vaulted wooden restaurant at a retirement living scheme in Kent.

The post Morris + Company combines energy hub and nursery in block that is "part elephant and part castle" appeared first on Dezeen.