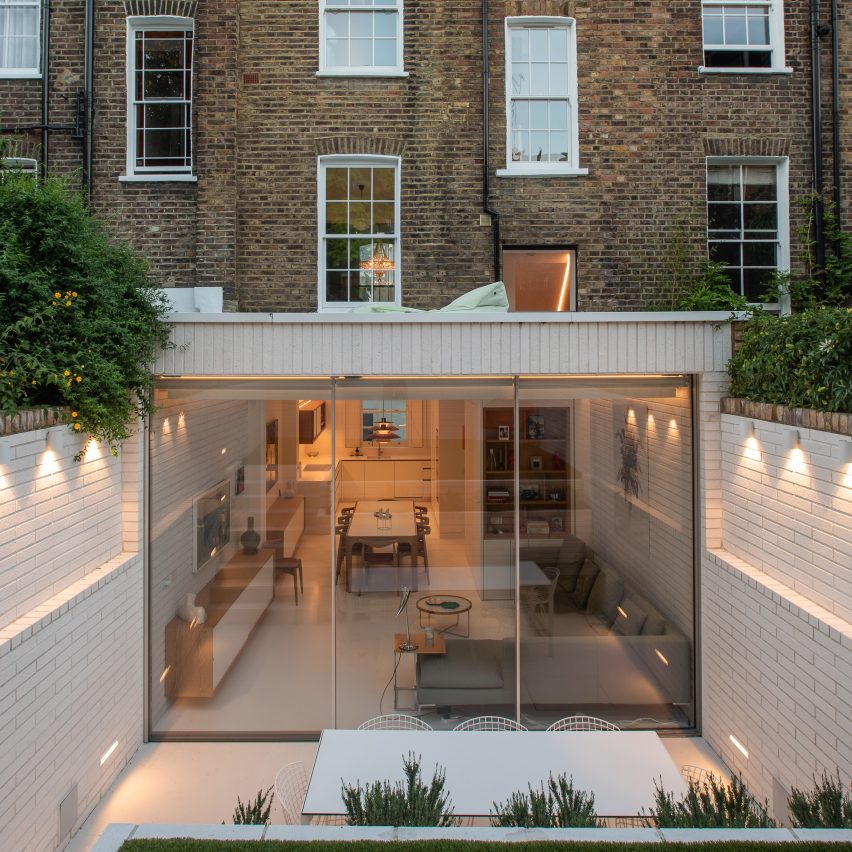 Located in a conservation area of Islington, north London, the early 19th-century home previously had a disconnected and cellular plan.

Moxon Architects gutted and redesigned its interior and added a small rear extension with open-plan living areas and a sunken garden.

“Having designed a flat for our client a decade ago, she came back to us with clear ideas for her next London home,” Moxon Architects associate Ezra Groskin told Dezeen.

“Her dream was a series of minimalist open spaces for living, entertaining and enjoying her garden.”

The studio looked to preserve the traditional organisation of the three-bedroom terraced house, with bedrooms on the upper levels and entertaining spaces on the lower levels of the house.

To do so, it excavated the basement of the building and added a small extension at its rear to create a full-width living space that opens onto a south-facing sunken garden.

“Creating a living space that opened onto the rear garden was the starting point of the design,” said Groskin.

“Having grown up in a warm climate, our client specifically chose this property for its south facing rear garden. With this orientation, we were able to create a sun-trapping sunken garden of light, self-finished materials.”

The concrete bricks extends out into the sunken garden to create a visual connection and a seamless transition between the two spaces.

A floor-to-ceiling glazed sliding door divides the split-level garden from the interior, to let light into the new living room and kitchen space on the lower ground floor.

The kitchen, located at the front of the home on the lower ground floor, was fitted with bespoke oak-lined cabinetry that provides a warm contrast to the crispness of the space.

The cabinetry extends across the open-plan living area and also covers the walls between staircases, auxiliary spaces and voids to maximise floor space.

“While the primary rooms were extended to their maximum proportions, secondary supporting functions were inserted into the resulting gaps like pieces of an interlocking puzzle,” said Groskin.

“The result is a range of spaces varying in scale, that all feel as though they’ve settled into their rightful places.”

On the ground floor, a formal living area incorporating period features is an exception to the crisp white, minimal aesthetic.

Its original shutters, fireplace, cornices and a ceiling rose were restored and painted a deep blue to match the walls.

Upstairs, the bedrooms mark a return to the minimalist design with clean, white-painted walls. Feature walls, including a leafy patterned contrast wall behind the bed in the primary bedroom, and painted ensuites and bathrooms provide pops of colour.

Moxon Architects was founded in 2004 and has offices in London and Aberdeenshire.

The studio’s previous projects include a weathered steel extension on Aberdeenshire Councils headquarters and a remote studio in the Scottish highlands.

Photography is by Alexandria Hall.