Dutch firm MVRDV has revealed plans to build a cluster of mixed-use towers in Abu Dhabi, featuring pixellated corners that will frame a public square designed by Danish studio BIG. 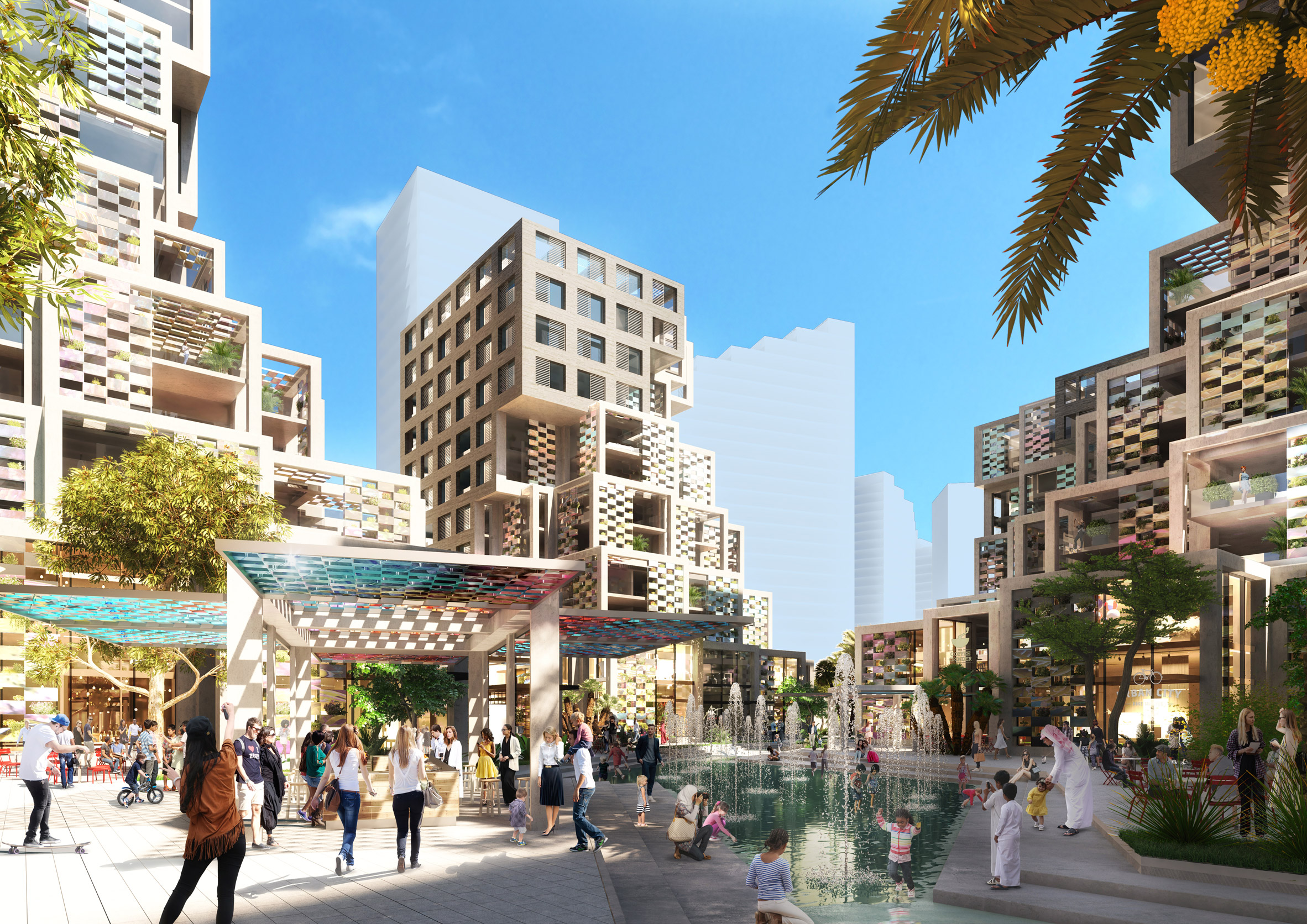 The 76,000-square-metre scheme planned by MVRDV comprises seven mid-rise towers, containing 480 apartments in the upper levels, and shops, offices and co-working spaces in the lower storeys.

These seven towers will surround the public square designed by BIG, the firm led by architect Bjarke Ingels. 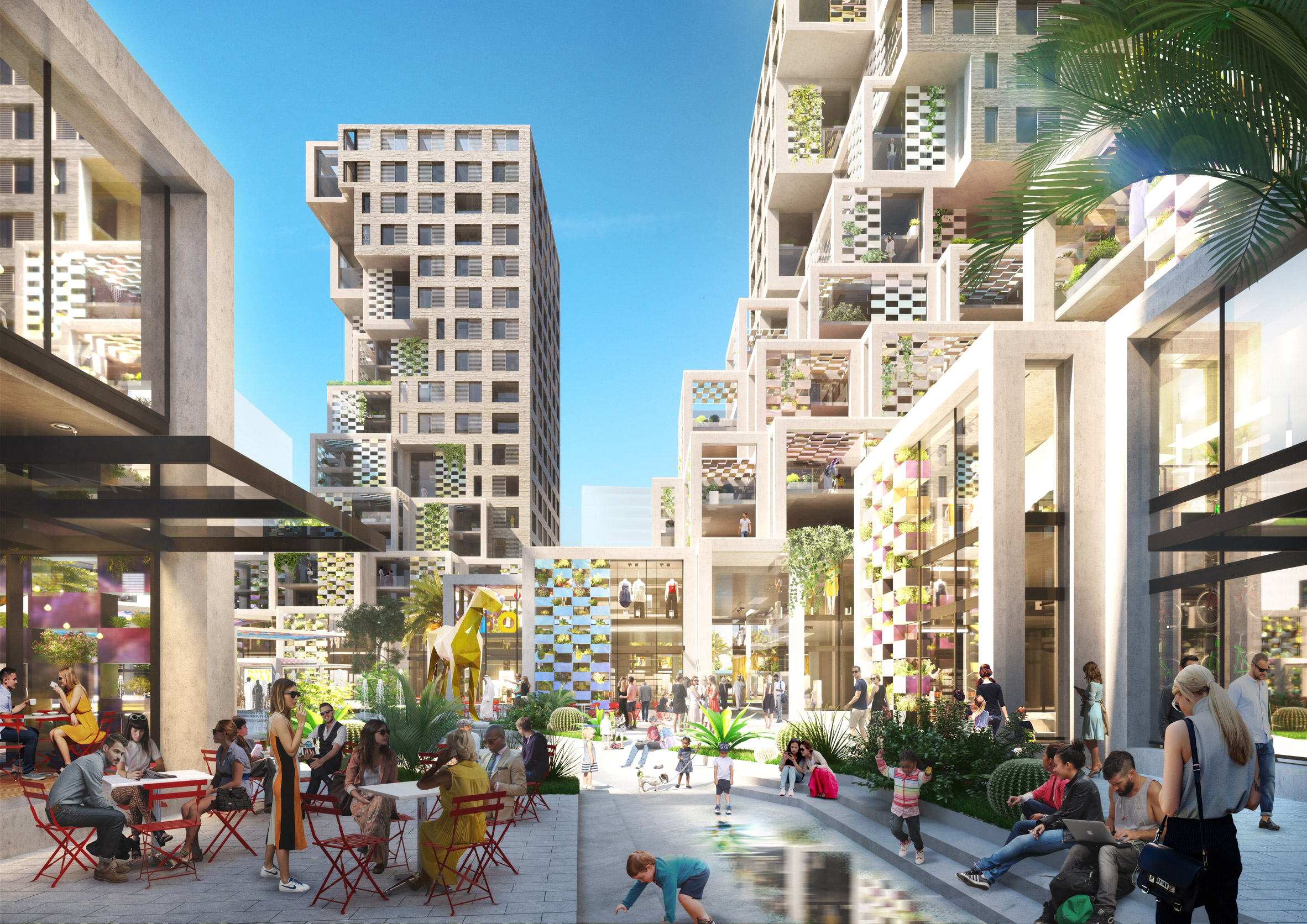 Cubic cut-outs in the corners closest to the square will lend the buildings a pixellated appearance – hence the project name, Pixel. These cutouts will provide terraces overlooking the public plaza at the centre and the waterfront beyond. The development will occupy a site in Abu Dhabi’s 18-hectare Makers District, an area being masterplanned by IMKAN Properties.

The district is located opposite Saadiyat Island cultural district, which recently saw the completion of the Jean Nouvel-designed Louvre Abu Dhabi.

The towers will feature “restrained and minimalistic” concrete facades and ceramic-lined interiors. 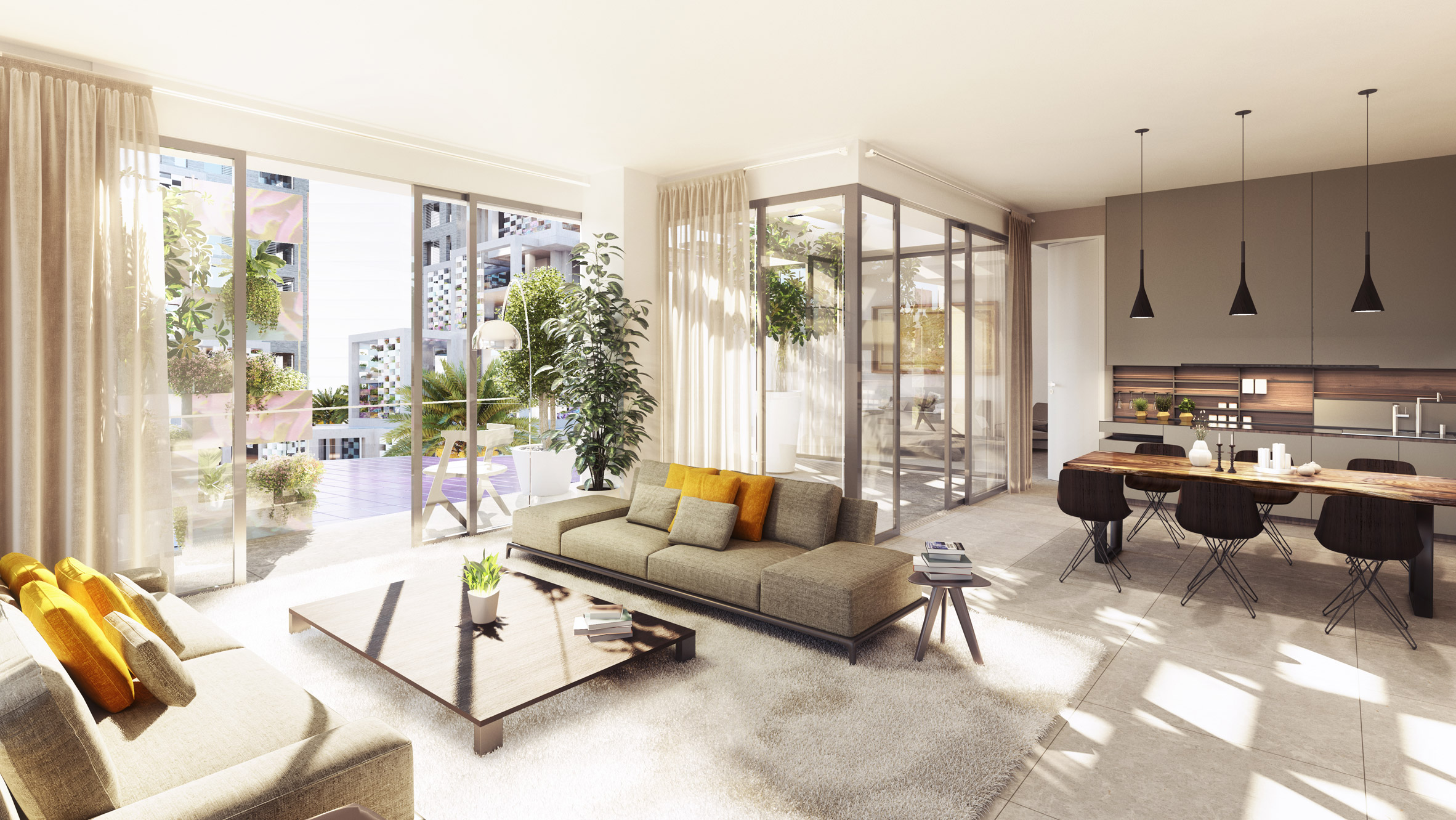 “As part of the waterfront development Makers District, Pixel will offer contemporary living in a dynamic setting for future residents, as well as both local and international creatives,” said MVRDV co-founder Jacob van Rijs.

“All of the towers facades combine concrete with luminous ceramics on the inside, a nod to the region’s pearl diving heritage; and they will be a vibrant and engaging community for creativity, learning and forward living.” 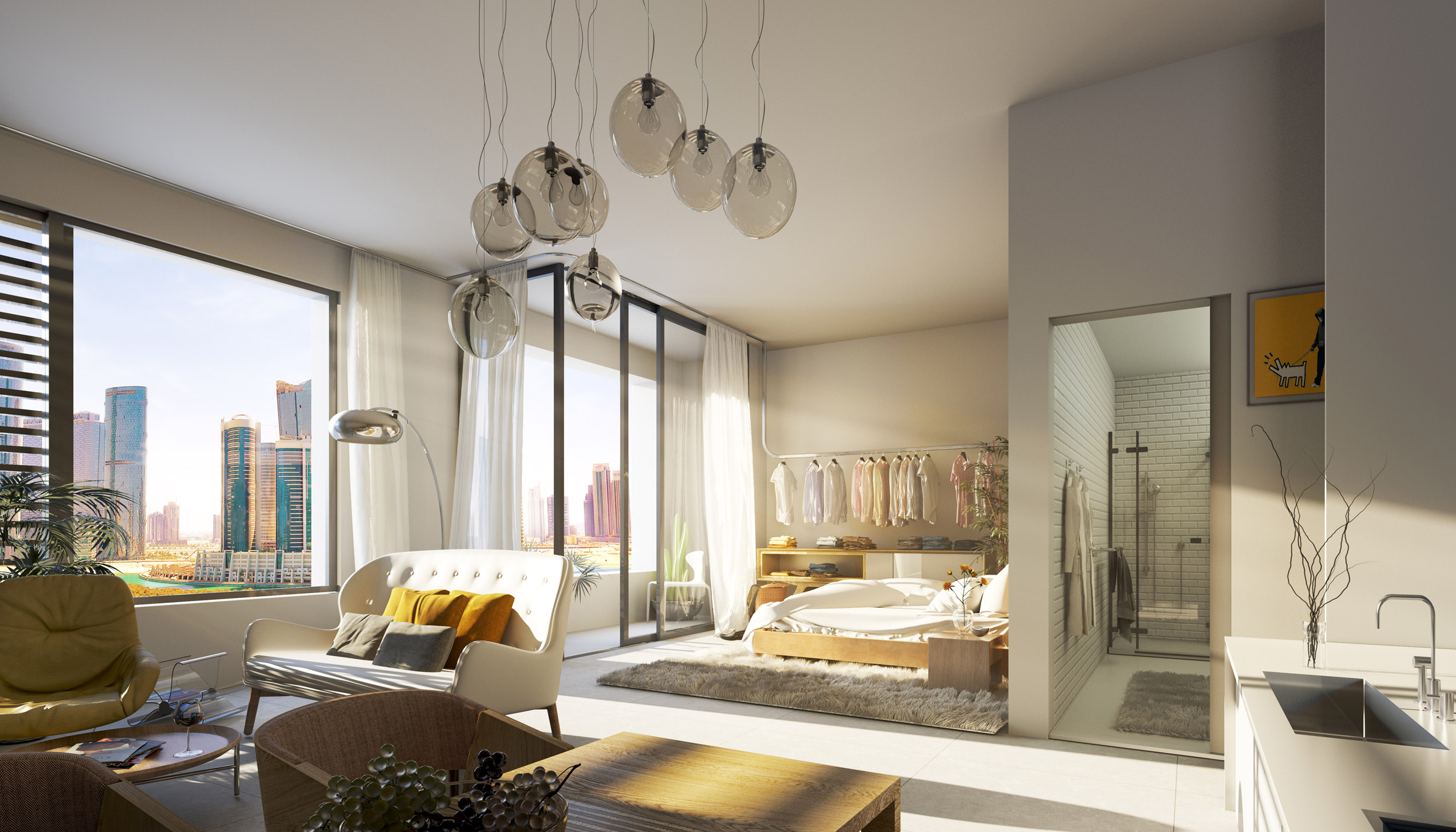 The architects hope to develop a village-like atmosphere by connecting the central plaza with the surrounding streets and waterfront, via pathways between the blocks.

Alongside the luxurious apartments and large shops, there will also be 50-square-metre units to attract startups, and studio apartments to appeal to the “millennial mindset”. 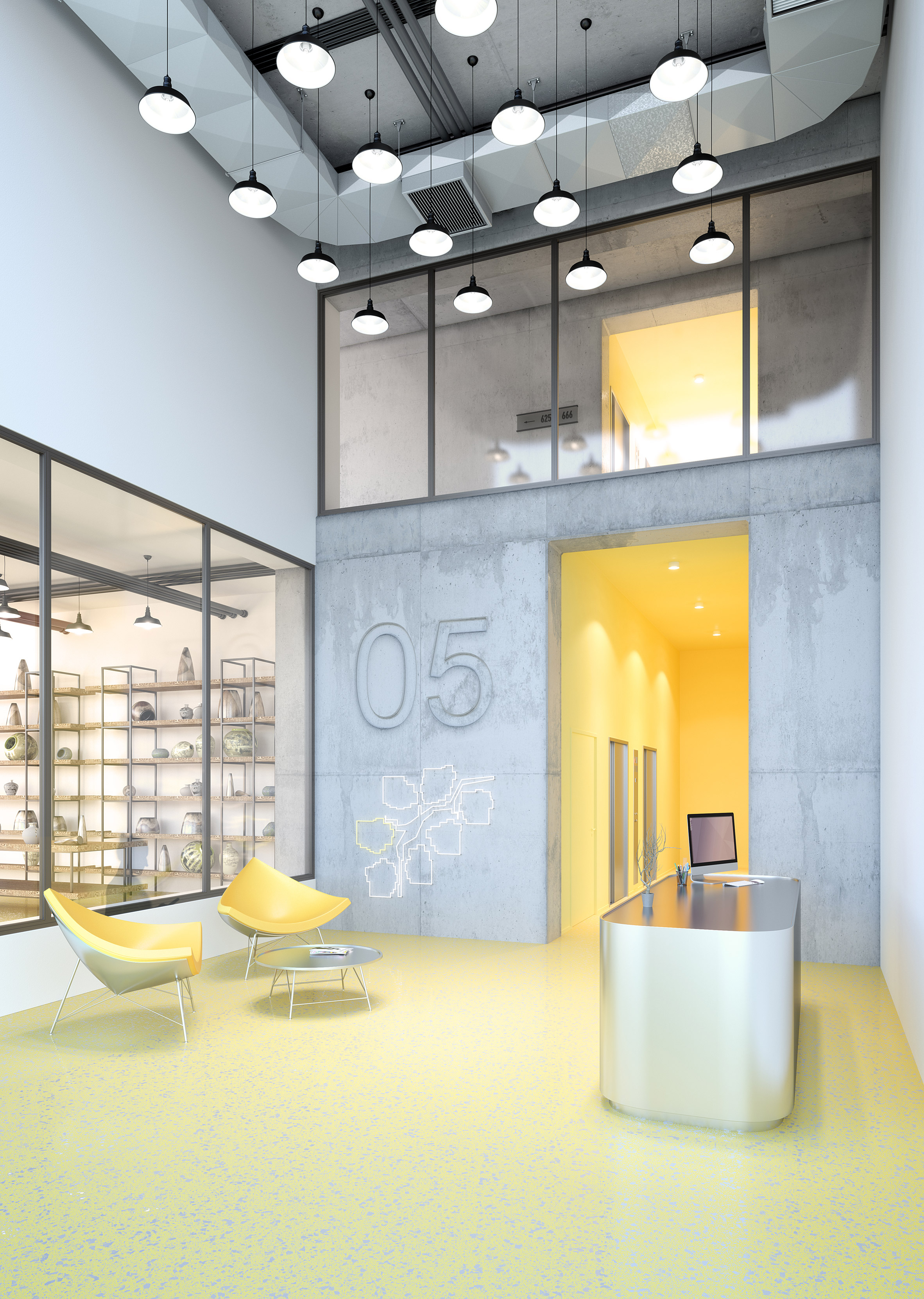 MVRDV has now developed a number of projects based on the pixel, including a Rotterdam skyscraper covered in hundreds of bay windows and a pair of mixed-use towers in The Hague featuring staggered rooflines.

However this will be the firm’s first project in the United Arab Emirates. It will be delivered in collaboration with consultants Ramboll Middle East and local architecture practice Dewan.

The firm has also recently completed a public library that looks like a huge eye as part of a new cultural district in Tianjin and converted a Seoul overpass into a plant-covered walkway.