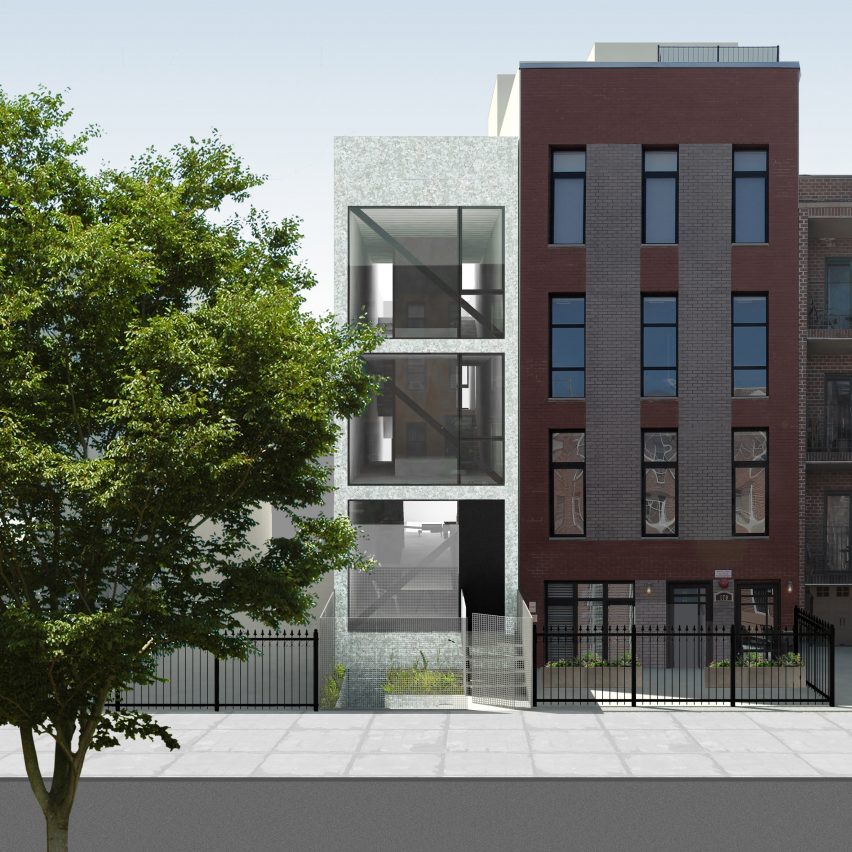 The latest instalment of our Dezeen x MINI Living series features an extremely narrow house designed for a 3.9-metre-wide plot in Brooklyn.

Designed by New York studio Only If Architecture, the house will make use of an unused plot of land between a pair of apartment blocks in Brooklyn.

Only If co-founders Karolina Czeczek and Adam Snow Frampton designed the house to be their family home and hope the design will become a prototype “for how to infill overlooked parts of the city”.

The house, which is currently being built on a plot that is 3.9 metres wide and 30 metres long, is designed to optimise circulation and daylight.

The architects have eliminated corridors and walls through a split level configuration where each floor has a single room to serving different functions such as living, sleeping and eating.

A void around the central staircase will act as an entry point for natural light and will allow air to circulation throughout the house.

The architects stated that using small or irregularly-shaped plots of land for building housing is a vital strategy to house a growing urban population.

“In the midst of the contemporary housing crisis, infill is absolutely needed as an urban strategy to produce greater quantities of housing,” the pair told Dezeen.

The house is being built in parallel with Irregular Development, a research project by Only If which catalogued 3,600 unused plots of land across New York City. The findings of the research project were exhibited at the Shenzhen Biennale in 2018.

Only If found that the plots were unused because they were small, narrow, triangular or irregular in their shape and therefore not attractive to large-scale developers.

“Utilising these vacant lots for housing, although individually small in scale, could contribute to much-needed housing stock,” the architects said.

The duo also claim that building on small plots will open up modes of experimental development.

“In New York City, the normative production of housing favours the repetition of known formulas on big sites by large developers who commission experienced architects,” they said.

“In this sense, the housing crisis in the city could be seen not only as a crisis of quantity but also a crisis of imagination and an absence of design.”

“Narrow, small, or irregular lots could encourage more small-scale experiments by younger architects, and help us to imagine new forms of housing and new ways of living together,” they continued.

This movie is part of Dezeen x MINI Living Initiative, a collaboration with MINI Living exploring how architecture and design can contribute to a brighter urban future through a series of videos and talks.

The post Narrow House designed as prototype for building on unusual plots appeared first on Dezeen.