This treehouse residence in Hong Kong has been overhauled by local firm NCDA, which designed a cosy bedroom level suspended above the main space.

Originally, the Mini Treehouse Residence had followed a more conventional layout, with all its living spaces arranged on the same floor. 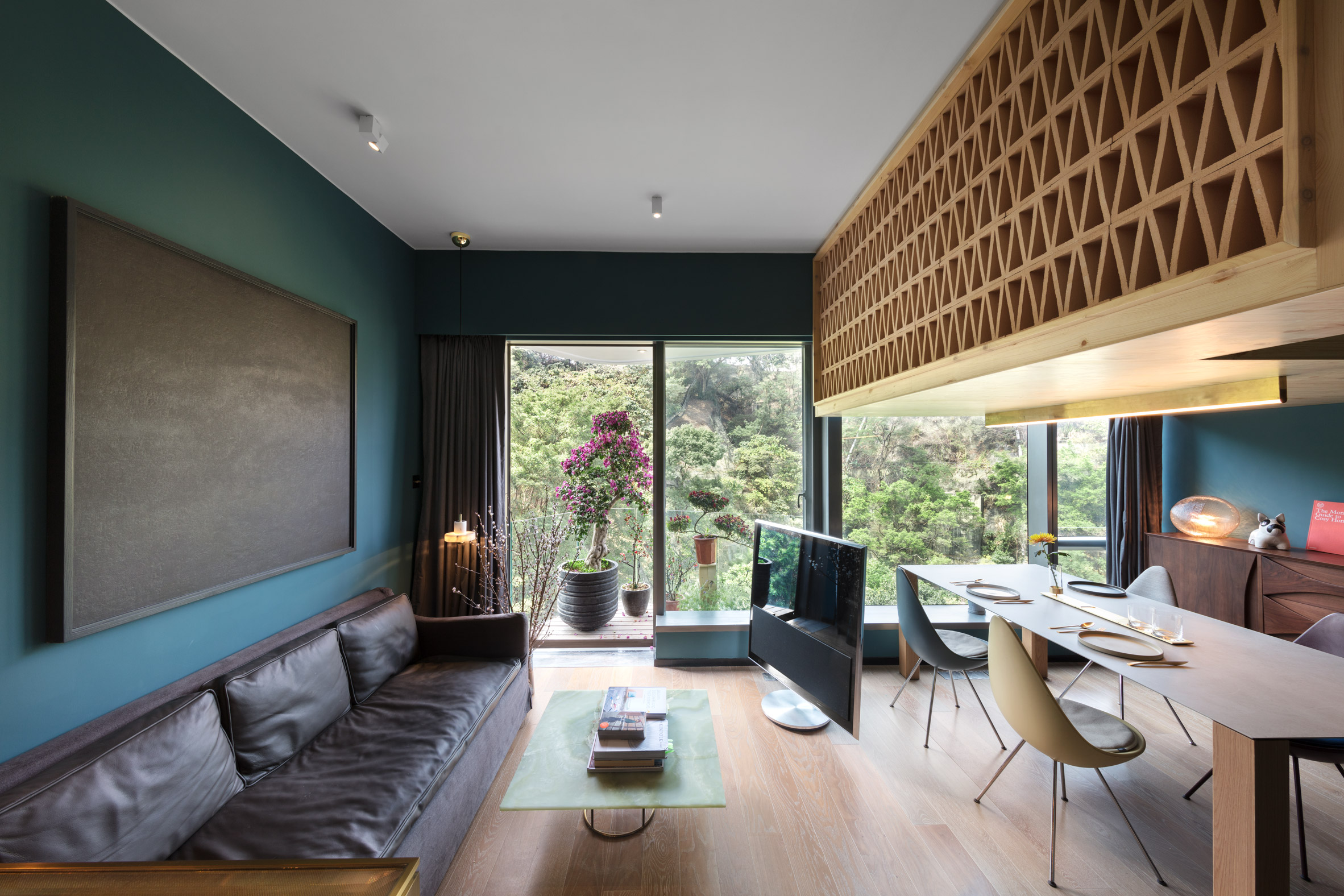 To make the most of its 34 square metres, NCDA removed the structure’s internal wall and moved its bedroom onto a new upper level, taking advantage of the treehouse’s 10-foot-high ceilings. 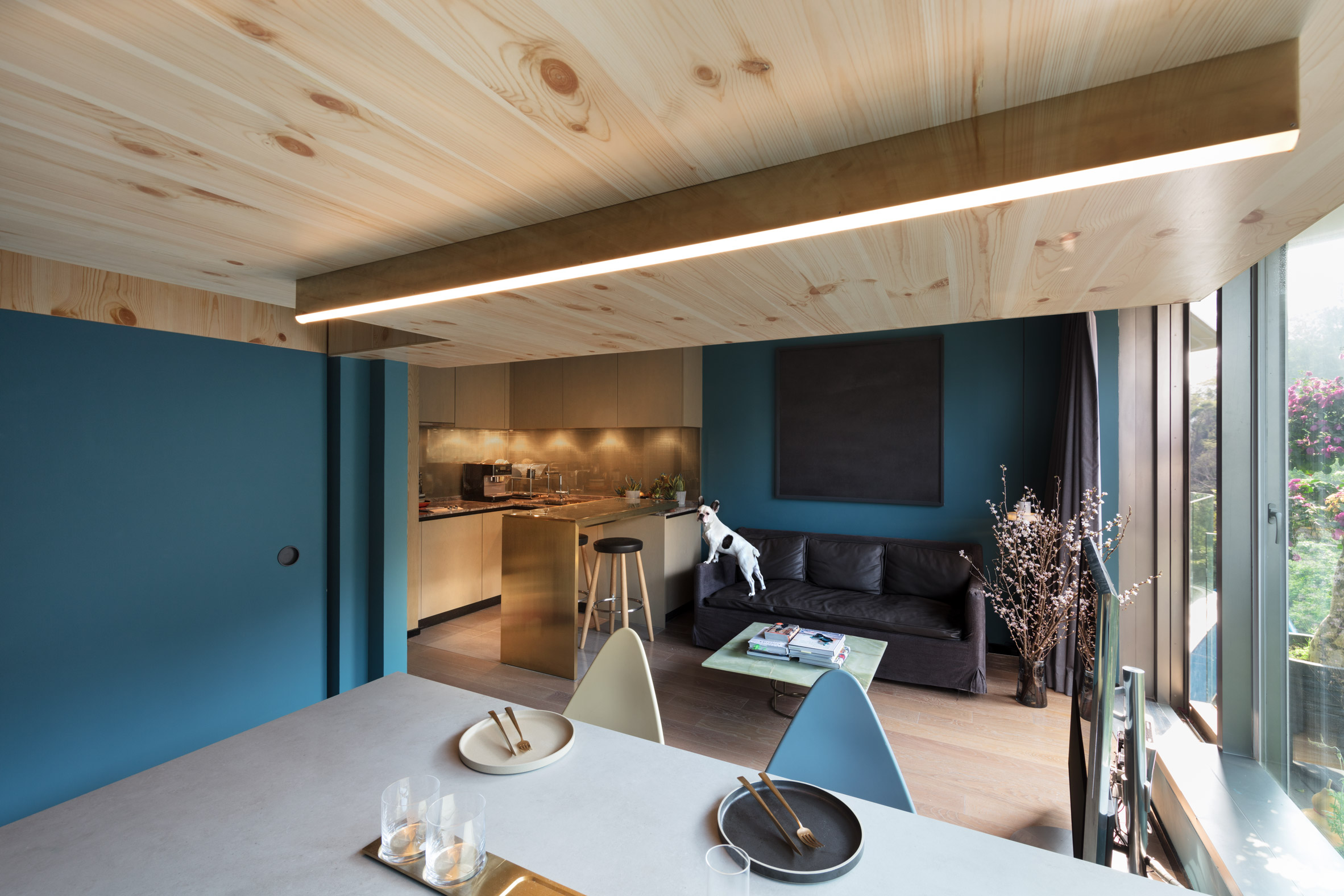 The new layout means there’s just enough space for its five-foot-seven-inches-tall owner to fit into the six-foot-high galley kitchen, which is set alongside an open-plan living area with enough room for a small lounge and dining room.

The studio adopted a new palette for the treehouse, using a dark blue for the walls to contrast and frame the building’s surrounding greenery. 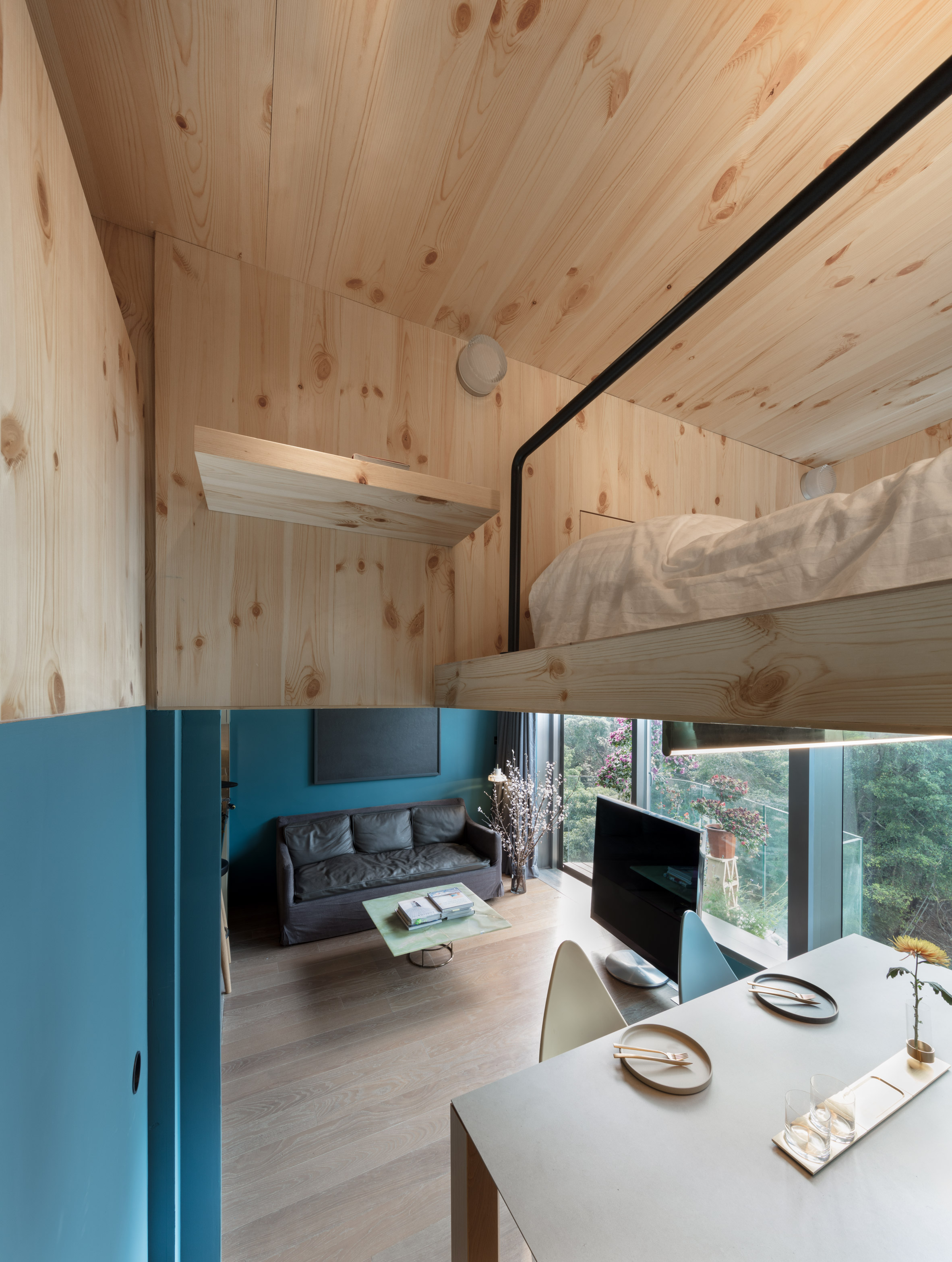 The views are visible through the building’s sliding doors, which open onto a small wooden terrace. Its glass balcony gives unobstructed views of the nearby forest.

NCDA has added textured terracotta tiles to the treehouse’s facade to lend “a touch of natural warmth”. 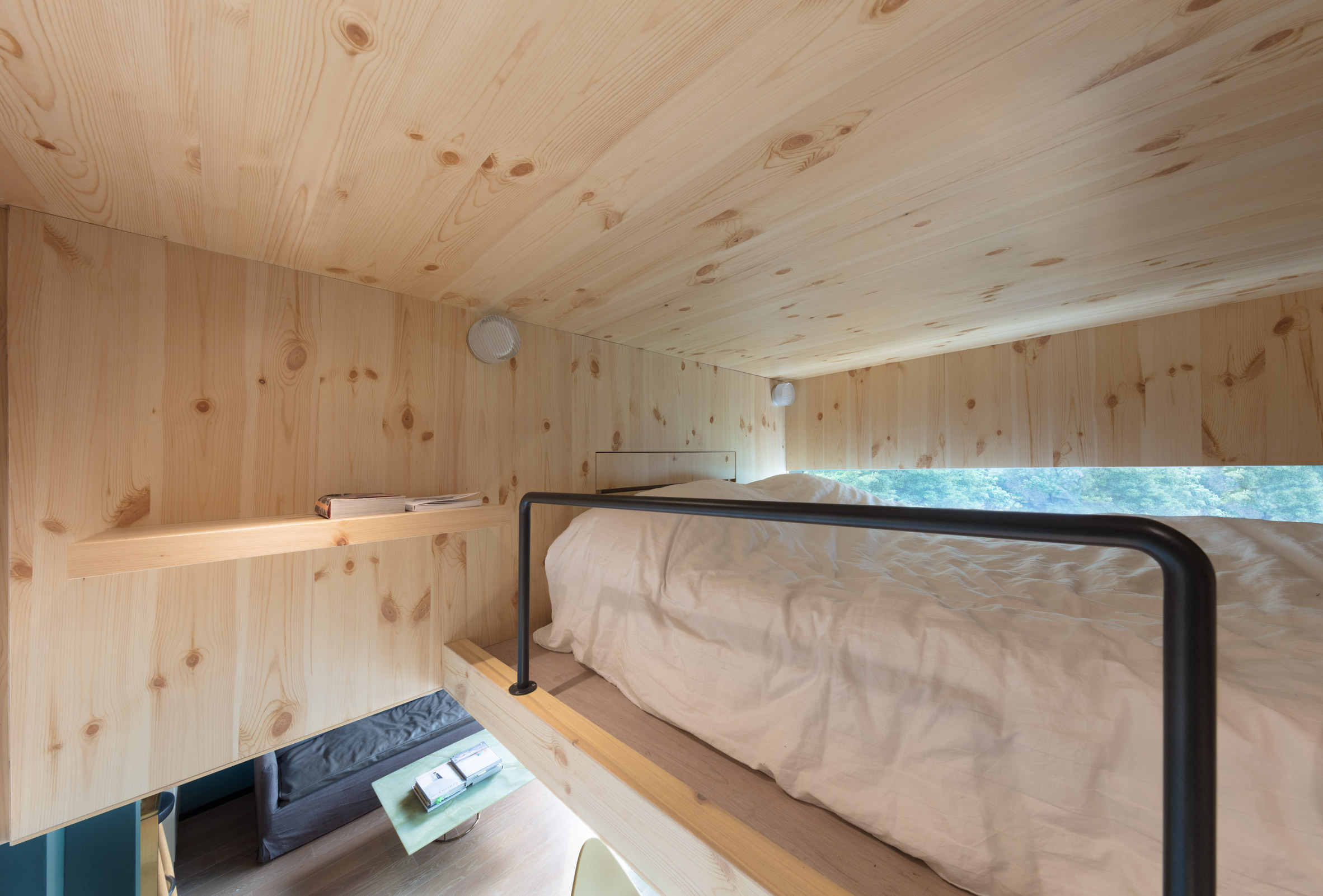 The building’s new mezzanine level is wrapped in a patterned wood screen and accessed by a ladder, which leads into a pine-clad sleeping space that measures four square metres. The deck offers just enough space for inhabitants to sit up in bed and read. 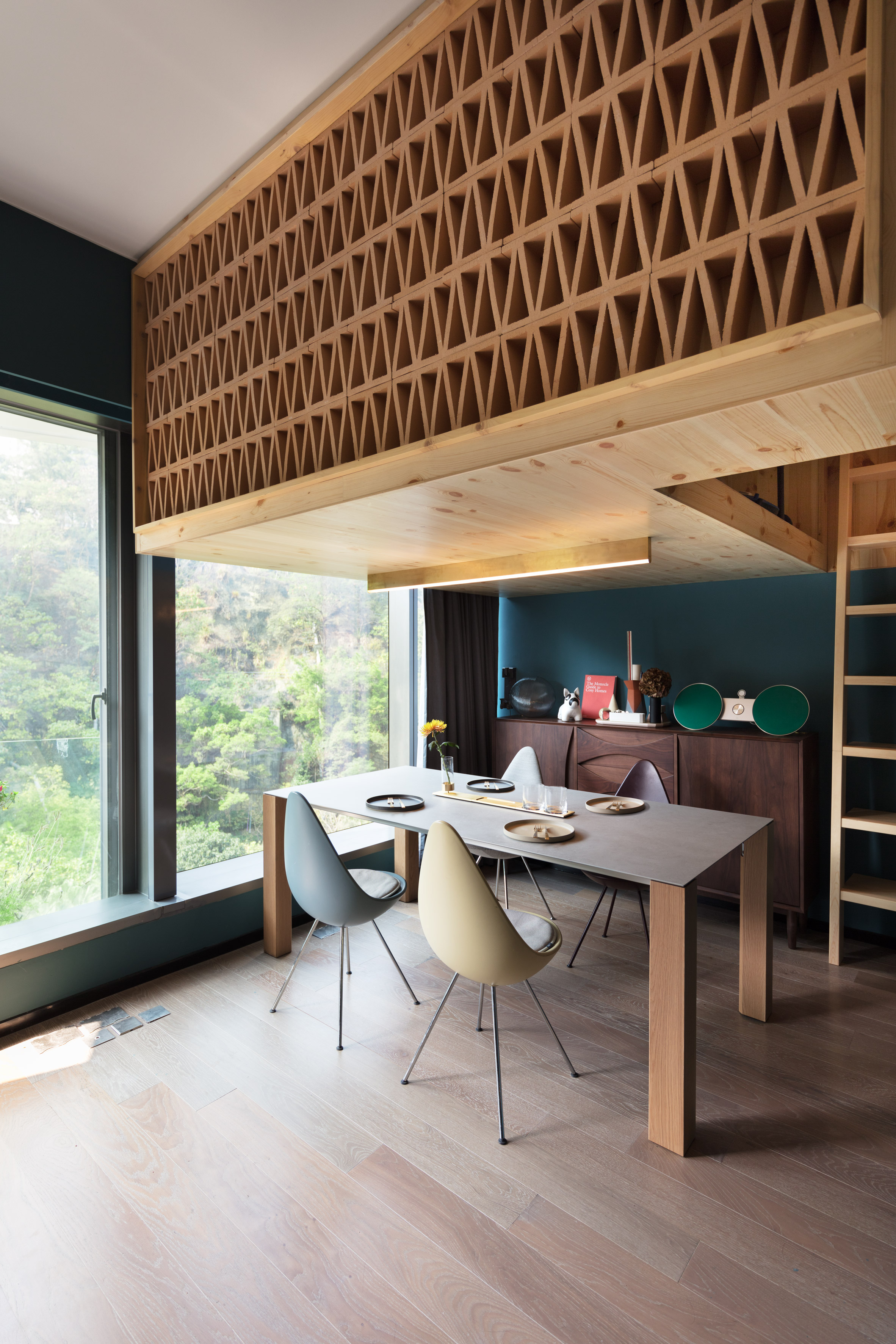 Designed to look like it is suspended in space, the loft bedroom also has a window looking directly onto the surrounding woods, giving owners the sense of sleeping amid the trees.

NCDA works in several areas of design, including architecture, interiors and furniture. It often designs bespoke pieces for its projects. 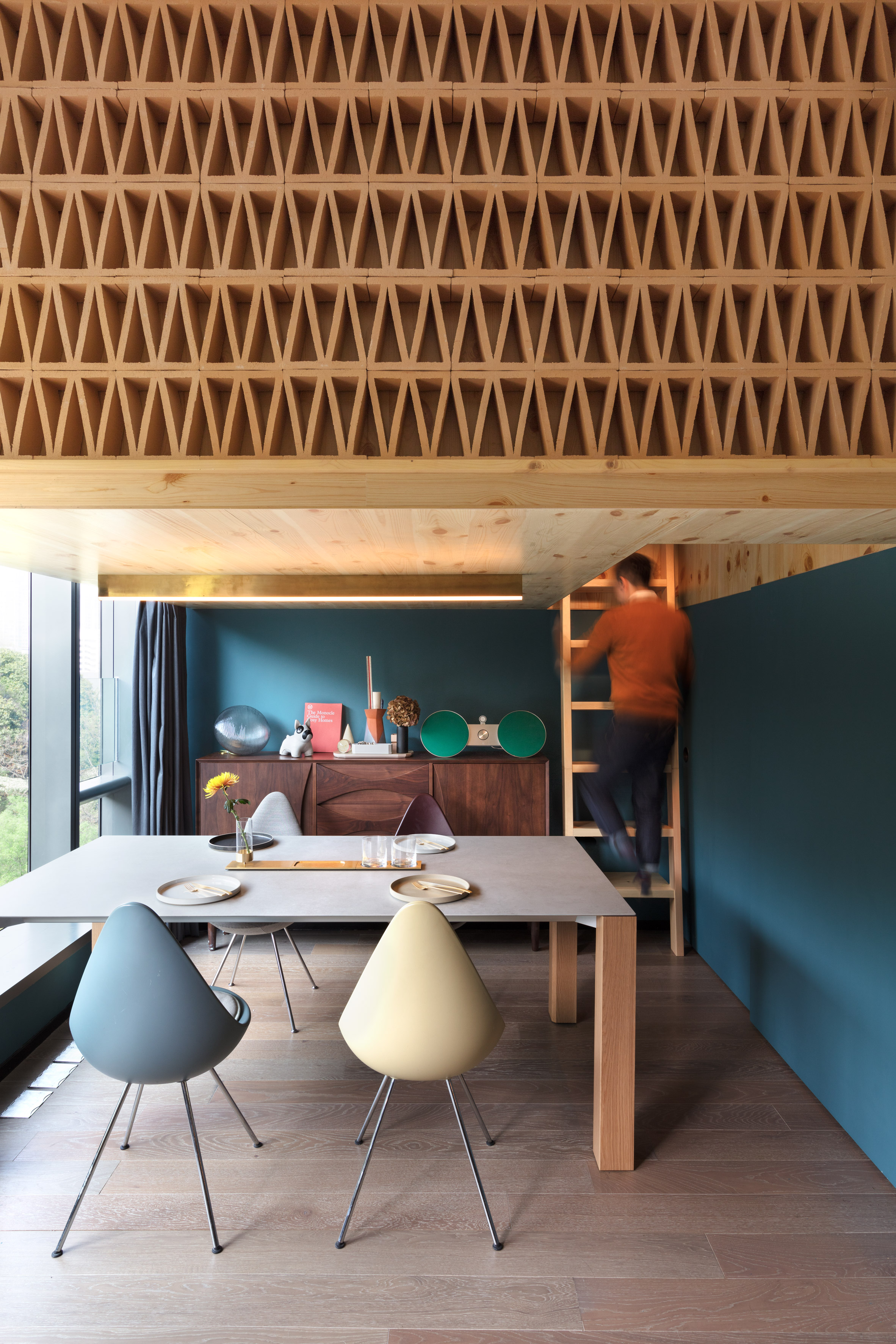 The studio has completed several projects in its home city of Hong Kong, including a tiny speakeasy accessed by pressing a hidden button and a restaurant designed to look like a 1920s coffee house.

Other treehouses that made the most of limited space include an eco-hotel in Mexico’s Tulum that peeps above the canopy and a pair of stilted huts in Beijing’s Miyun District.

Seven unusual treehouses you can sleep inside at Sweden’s Treehotel

Photography is by Dennis Lo.