Neumann Monson Architects has restored a 1850s farmhouse in Iowa, stripping away a series of poorly coordinated additions before updating it for the owners’ “modern” lifestyle.

Located outside Iowa City, the Foster Road Retreat is a single-bedroom residence that overlooks the Iowa River. The original building dates back over 150 years, but had been updated and extended several times 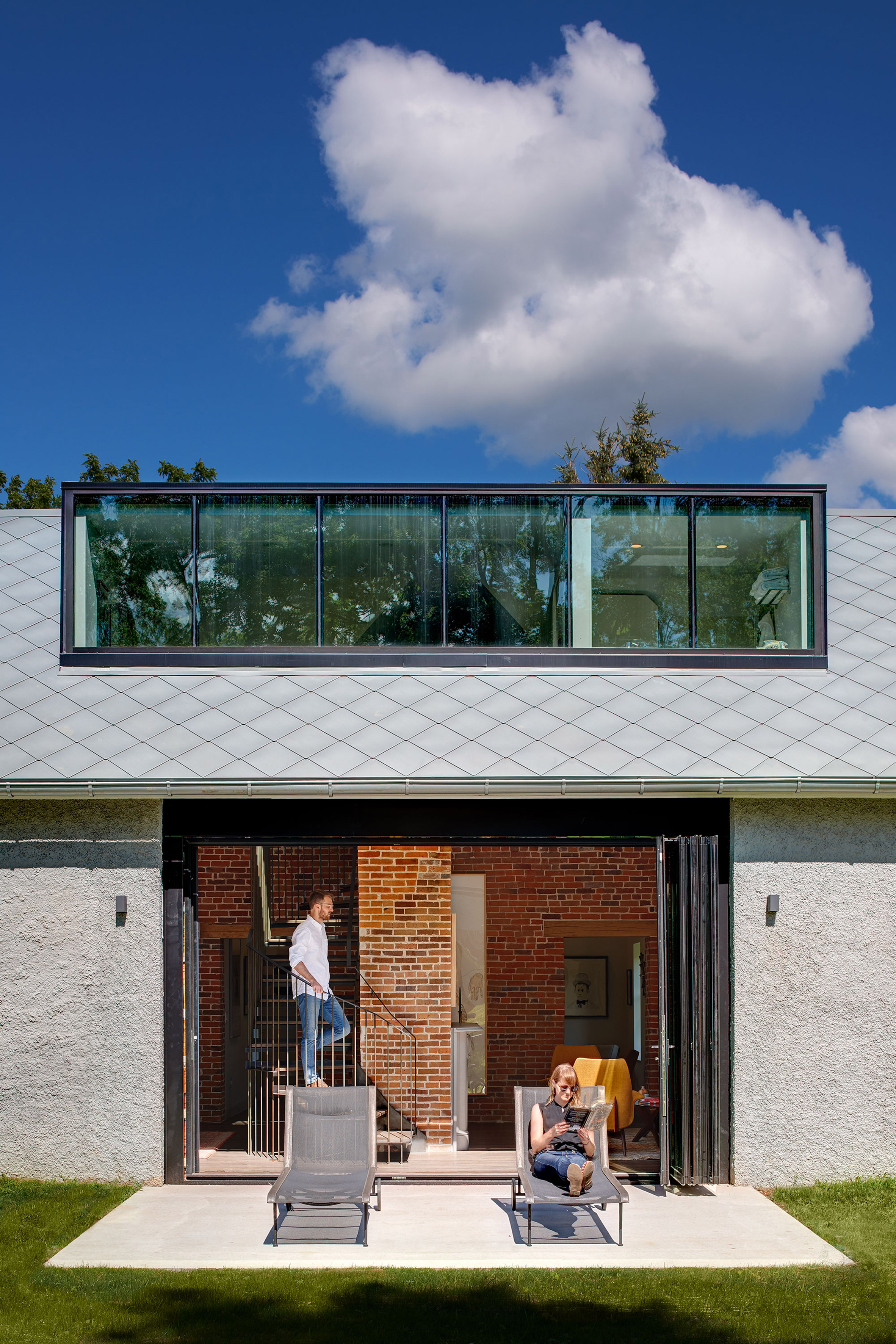 “Over the years, a series of well-intentioned accretions – ornamental dormers, an incongruous addition, and a cavernous porch – had cloaked the house in a dog’s dinner,” said local firm Neumann Monson in a project description.

“Demolishing these elements yields tailored alterations that sympathetically update the house for modern use.” 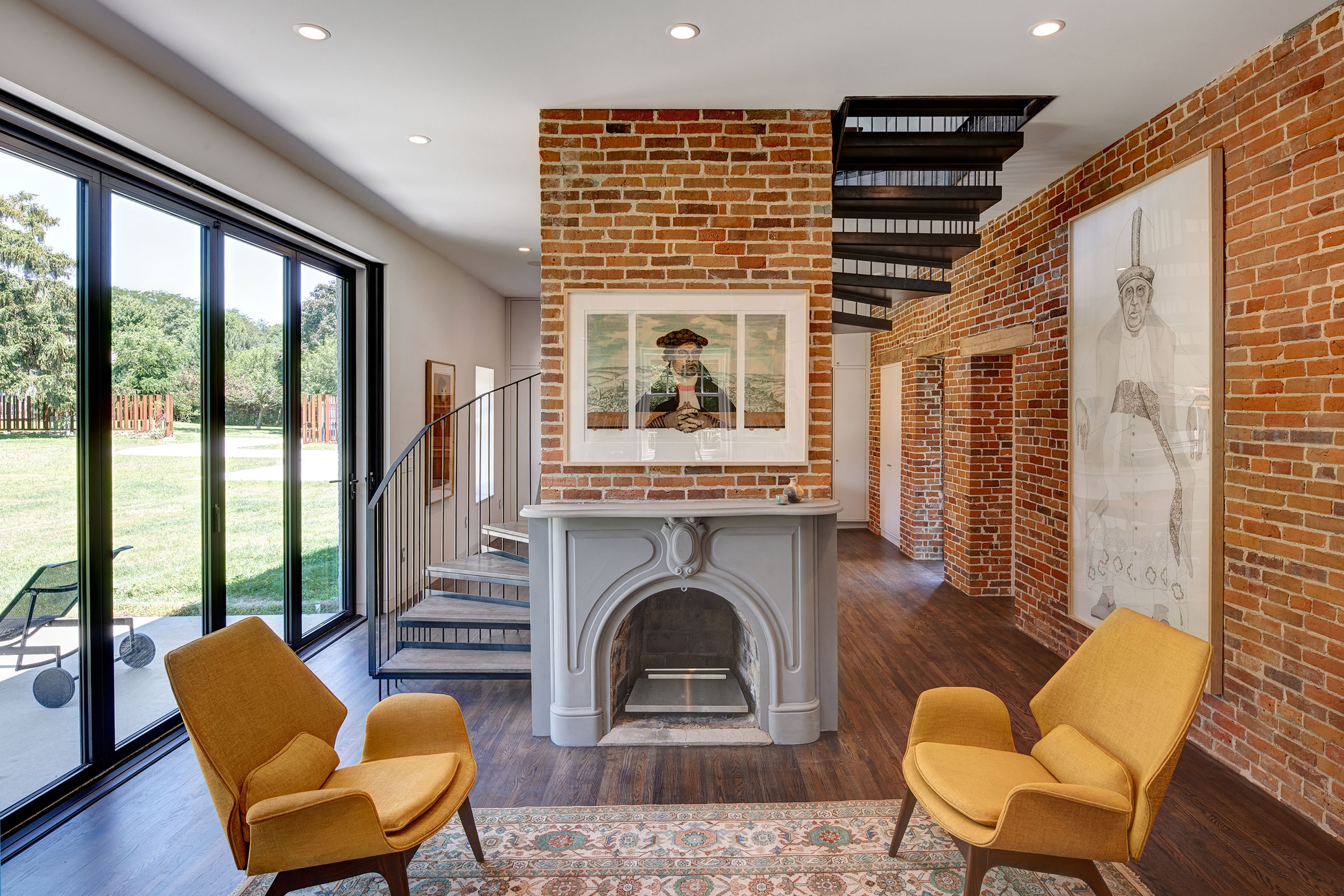 A new garage sits just north of the house, and provides space for two cars to park, with additional overhead storage.

A covered walkway leads to the restored residence, which is entered near the kitchen – laid out along the north wall of the house. 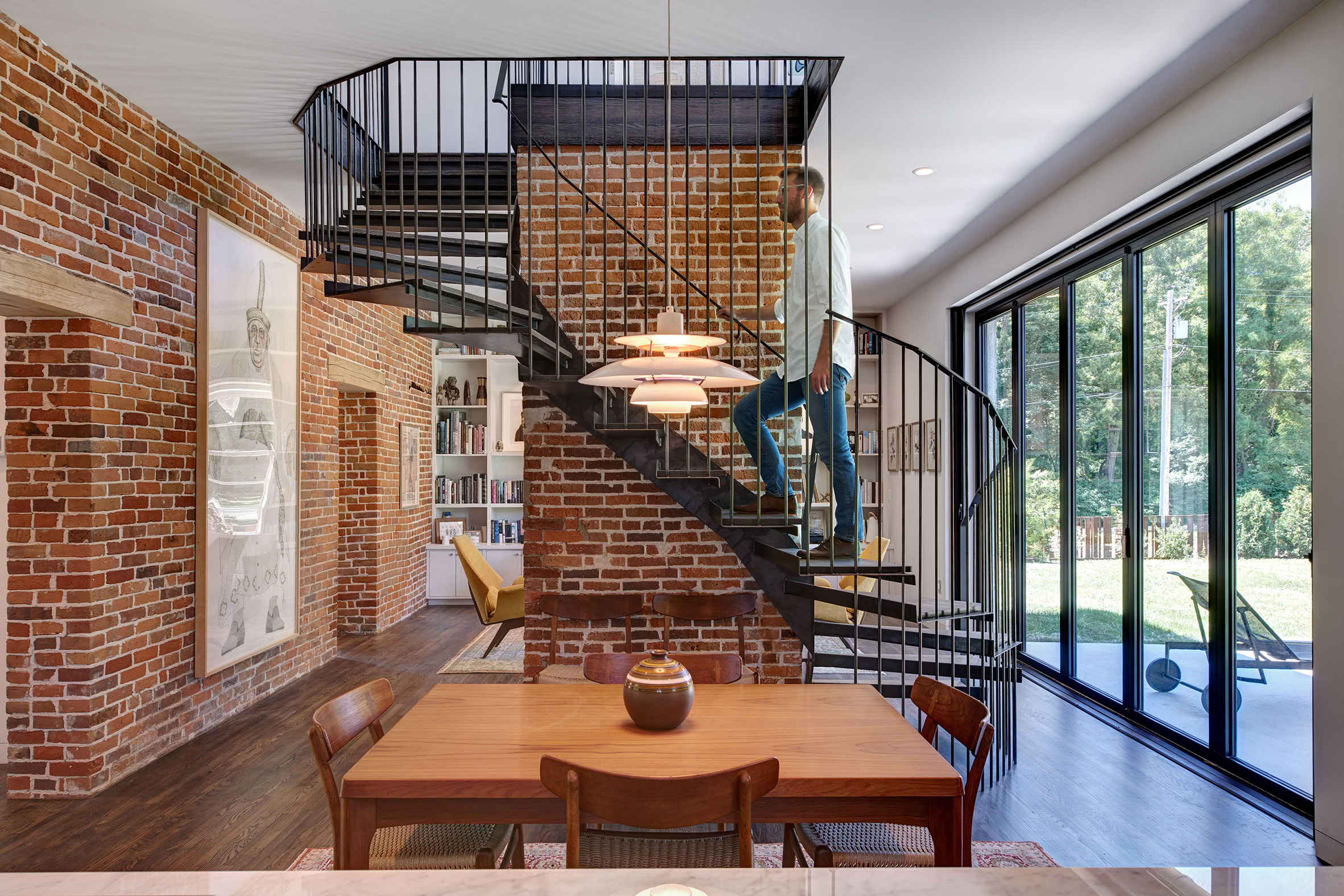 “At the north end, an unobtrusive, functional kitchen thickens the exterior wall with inset casework and appliances,” said Neumann Monson.

The sitting area is separated from the kitchen and dining room by a large, central brick fireplace, which had to be restored. A metal staircase wraps around the fireplace, leading to the upper level. Here, the architects included a small seating area, as well as the master bedroom and bathroom. 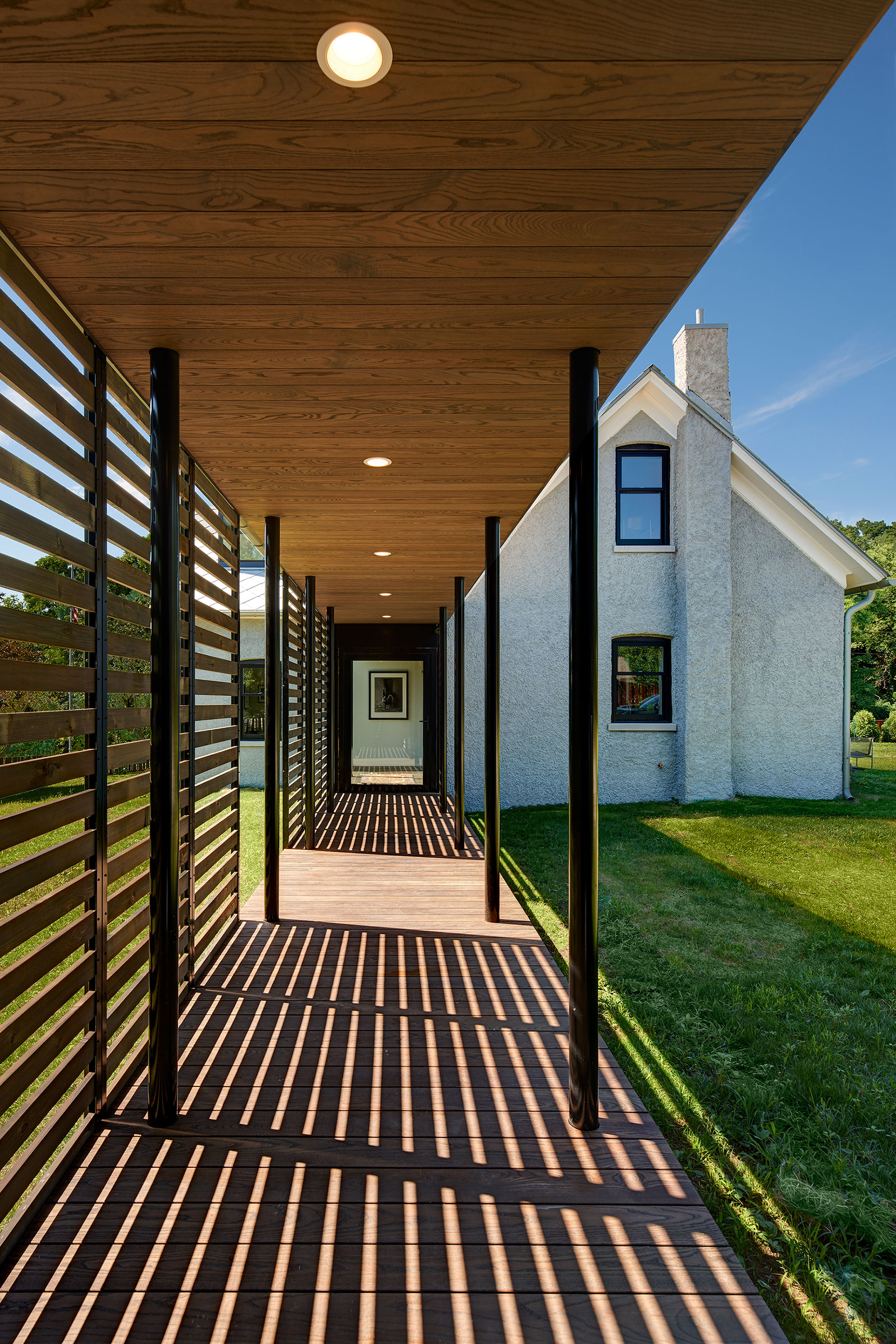 To bring more light into the space, and provide extra ceiling height, Neumann Monson slotted in two glazed dormers. This allows the residents to occupy a space that was previously a cramped attic.

The architects used a minimal palette for the residence, deferring whenever possible to its original materials. The exterior was preserved, and the rebuilt roof was finished with zinc tiles that match a historic photograph of the home that the owners had found. 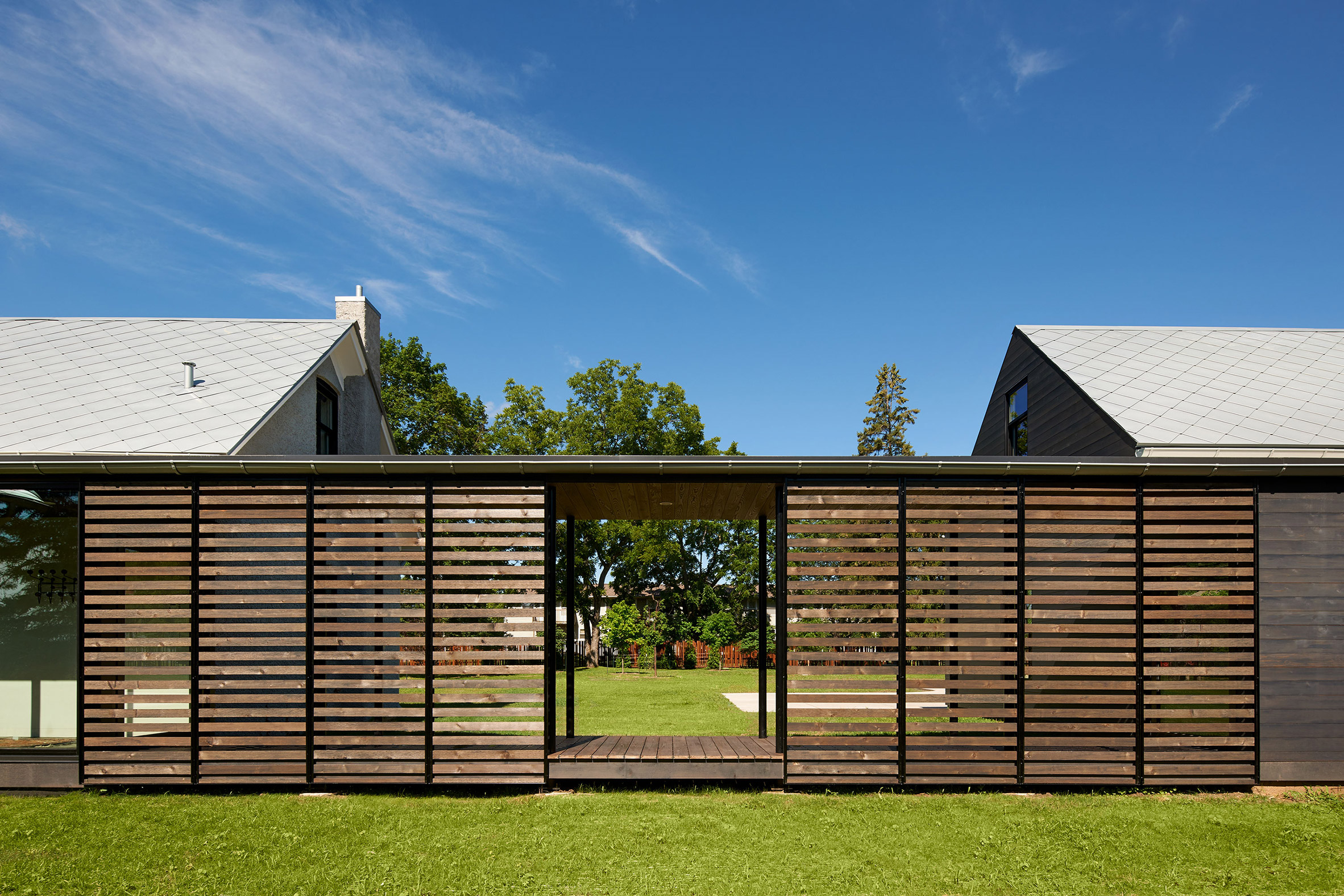 In addition to the home’s aesthetic and functional upgrades, the architects also made sure to improve its energy efficiency. Improved insulation and geothermal heating and cooling help reduce the building’s ecological footprint.

“With its infusion of minimalist design and energy efficiency, the retreat presents an understated choreography of new and old,” Neumann Monson said. “The result is a comfortably stylish upgrade, assertively and unselfconsciously modern.” 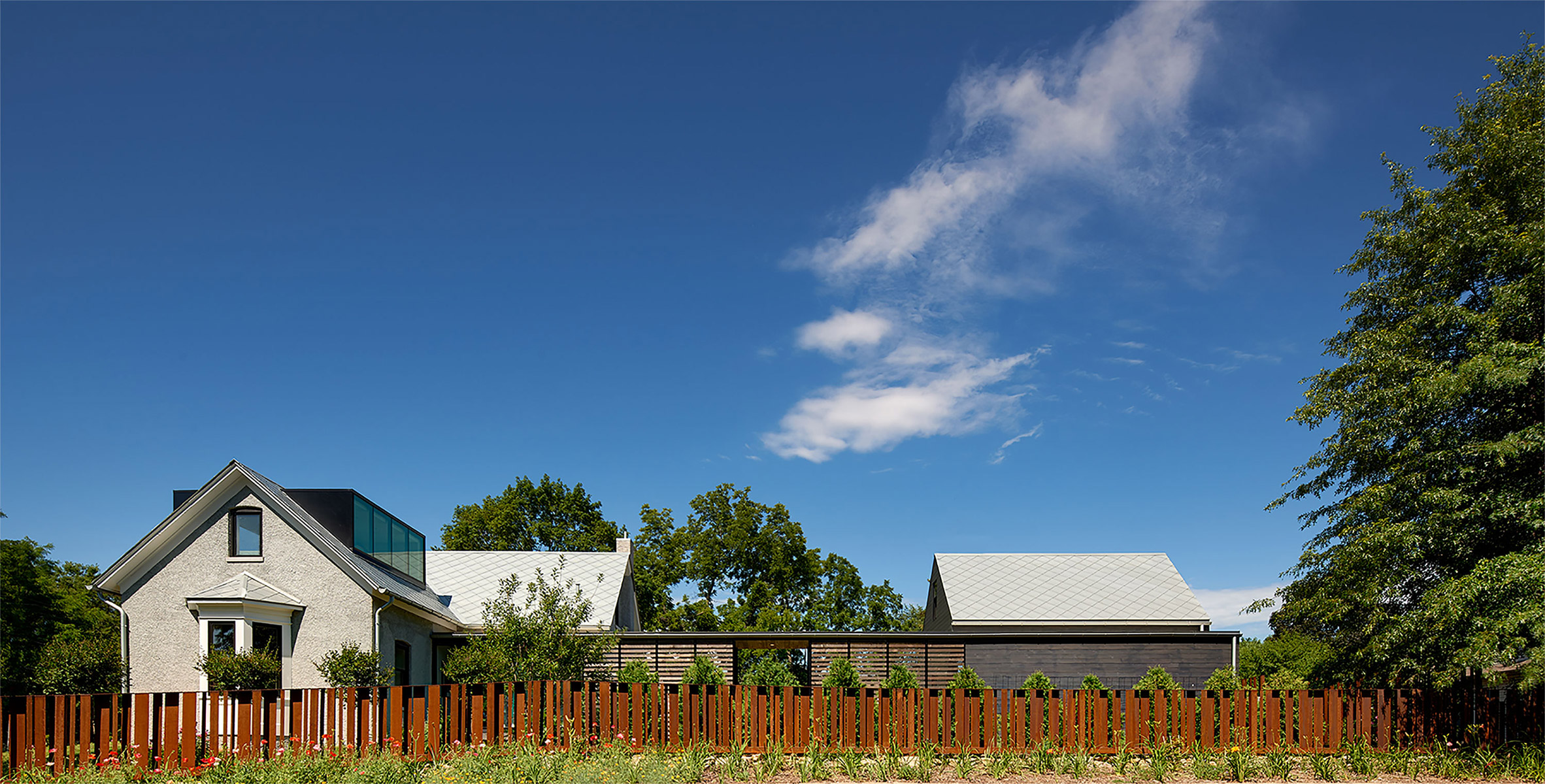 Other recent historic-home renovations include the restoration of a cylindrical mid-century-modern house in Alabama and a series of playful interventions added to a Tudor-style home in Montreal.

Photography is by Cameron Campbell.