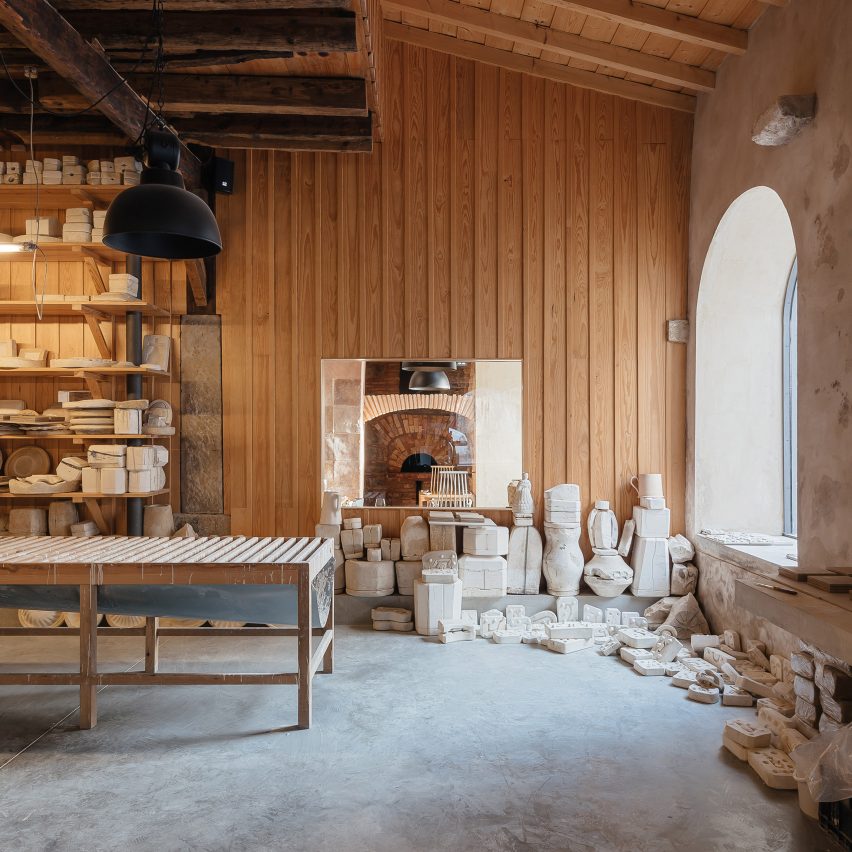 Simple plaster surfaces sit alongside aged wooden ceiling beams within this ceramics studio in Coimbra, Portugal, which has been overhauled by Luisa Bebiano Arquitectos and Atelier do Corvo.

Situated near the city centre, the Old Ceramic Society of Coimbra has been revamped by local practices Luisa Bebiano Arquitectos and Atelier do Corvo to “emphasise the continuity of time, without ruptures”. 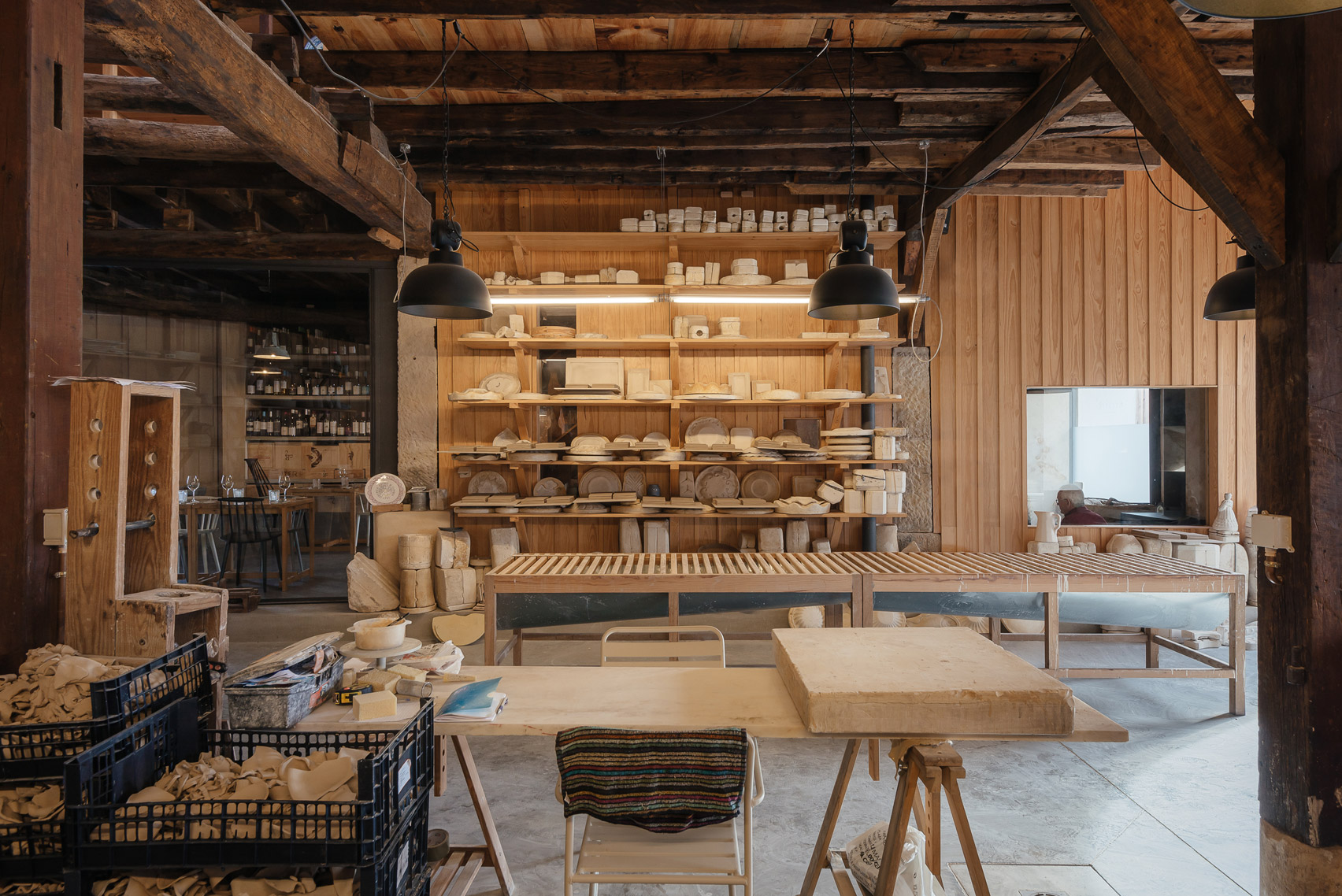 The 18th-century building was once part of a now-defunct group of ceramic factories that made use of Coimbra’s clay-rich soil.

“This building is the only example left with distinctive features,” explained the practices, “so it was imperative to recover, preserve and recontextualise it, renovating and equipping it with museological conditions to expose its heritage.” 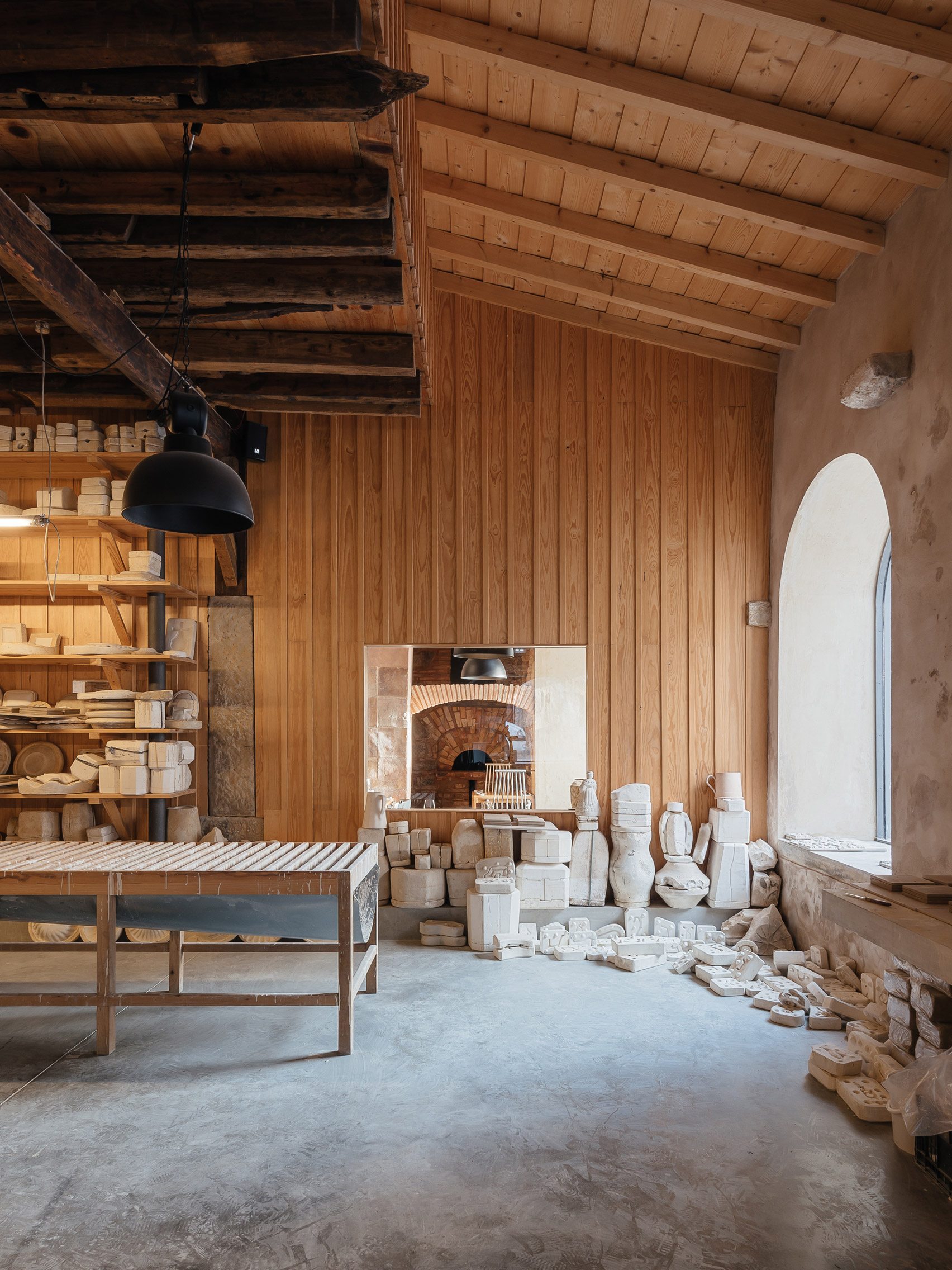 Maintaining a majority of the building’s historic structural shell, the practice has divided the interior into two levels. The ground floor plays host to a pottery workshop, where pieces being worked on by visitors line rows of open shelves.

Crumbling stone walls here have either been panelled over with timber or hand-rendered with plaster, creating a slightly unfinished effect. 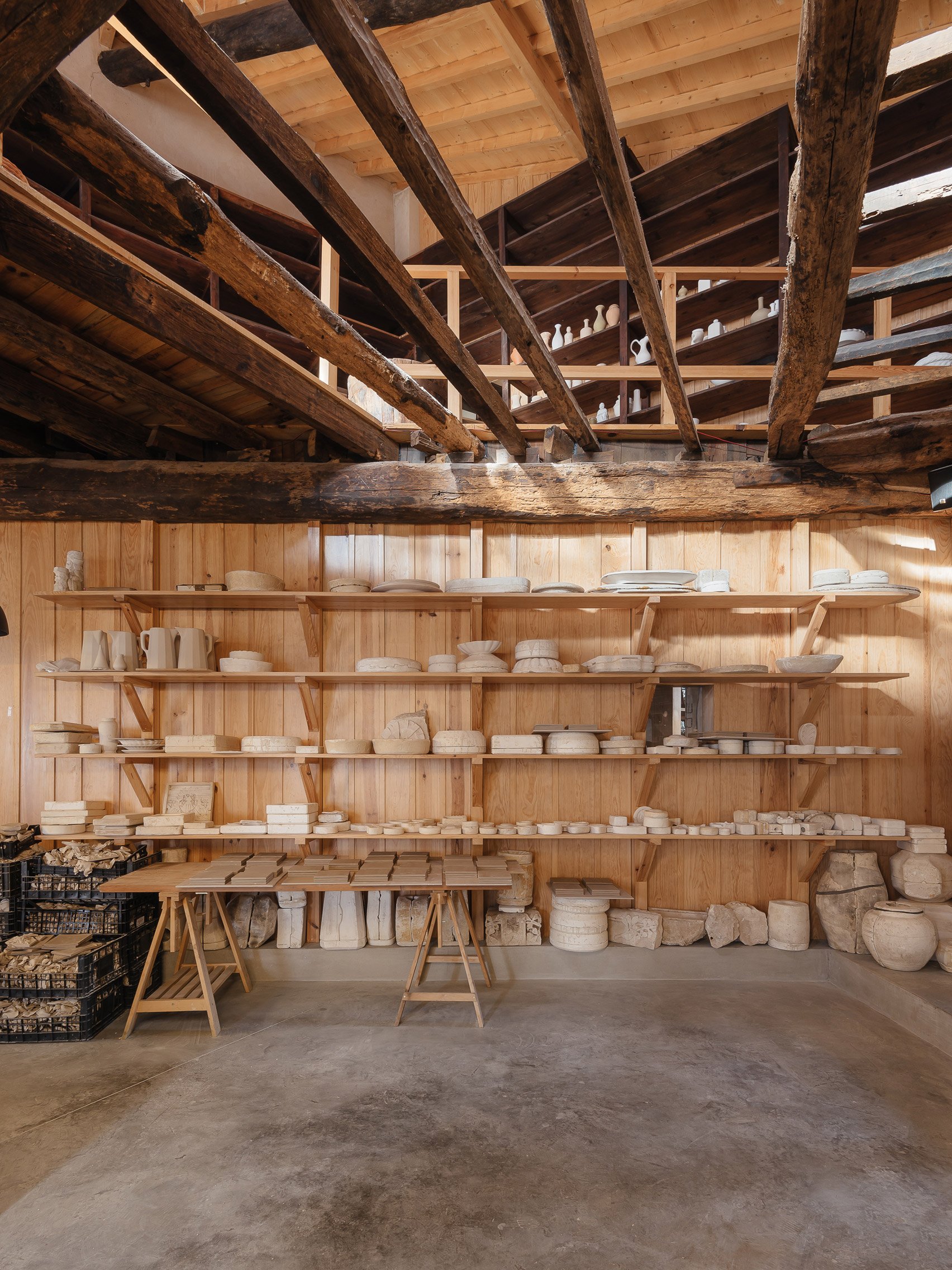 This floor also boasts a series of huge kilns where ceramics pieces are fired – the process by which clay is hardened and made more durable by exposure to high temperatures.

Large ducts built into the top of the ovens also help keep the building ventilated during the warm summer months. 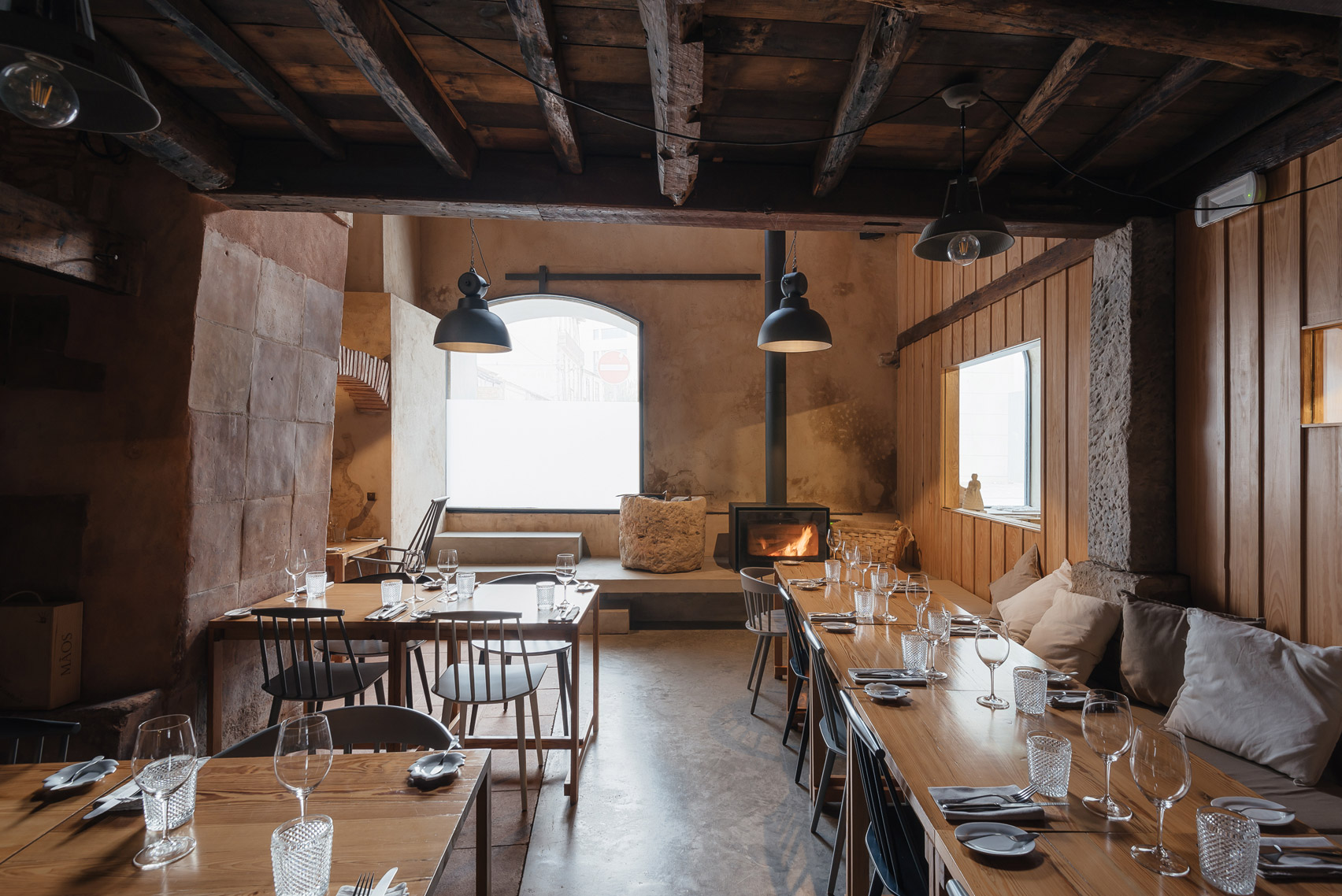 Upstairs, visitors can glaze and paint their ceramic works, some of which are displayed on tall storage units. Part of the pine flooring has been cut out to reveal the original wooden ceiling beams that have been preserved below at ground level.

The exterior of the building has been freshened up with a coat of lime mortar, and the formerly dilapidated roof has been entirely rebuilt. 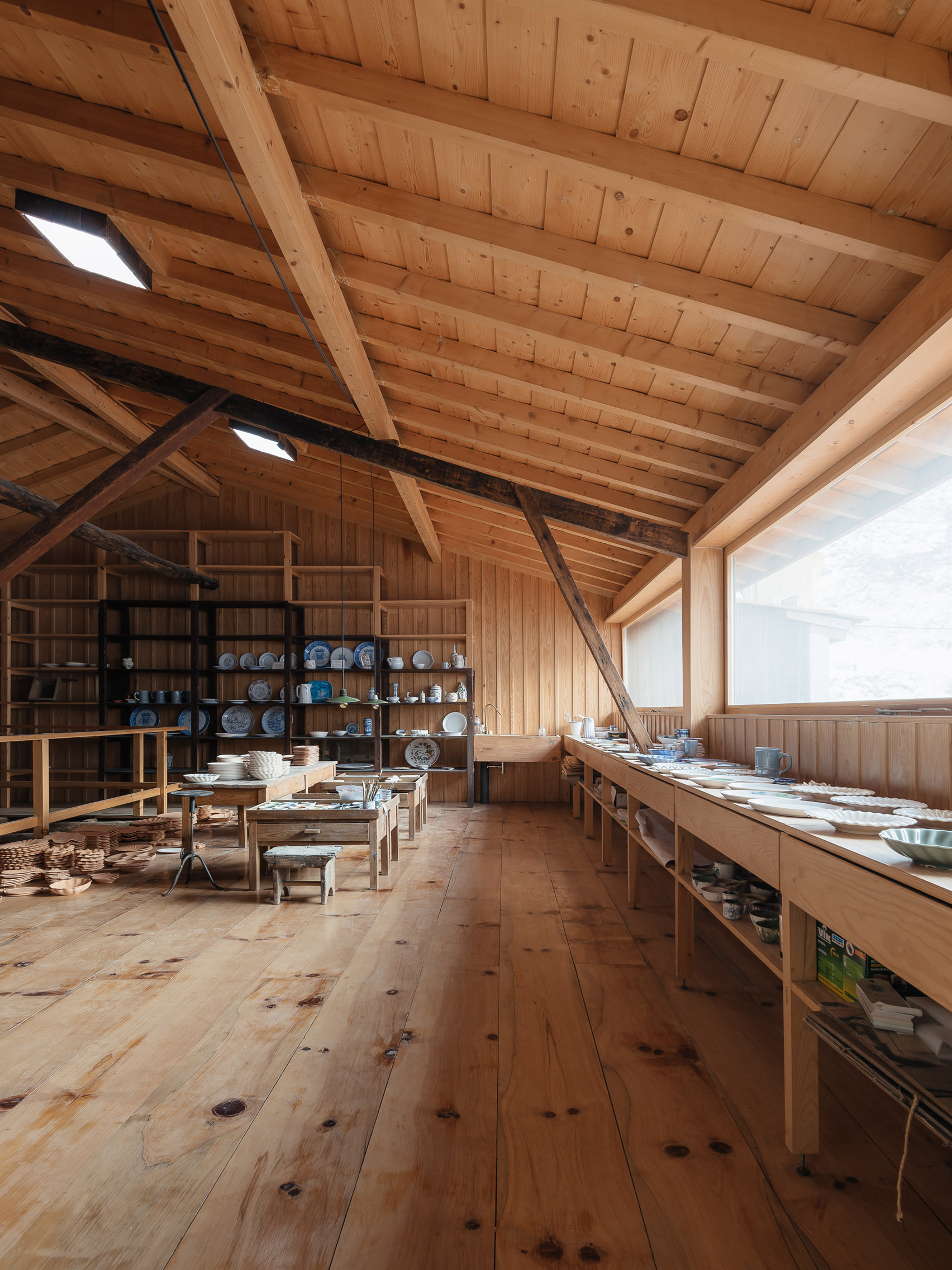 At the end of last year, architect Guillaume Terver created a ceramics store in Brittany, France which connects to a Japanese fusion restaurant. Its interiors are decked out with natural materials like clay, granite, and timber to form what Terver describes as a “low-tech” aesthetic.

Photography by Eduardo Nascimento from Do Mal o Menos.