Bedrooms inside this barn conversion extension in the English countryside are defined by the peaks of a sawtooth roof, which Blee Halligan Architects added during the building’s renovation.

The Five Acre Barn is home to a bed and breakfast, and is set between the Suffolk seaside towns of Aldeburgh and Thropness in the East Anglia area of England. 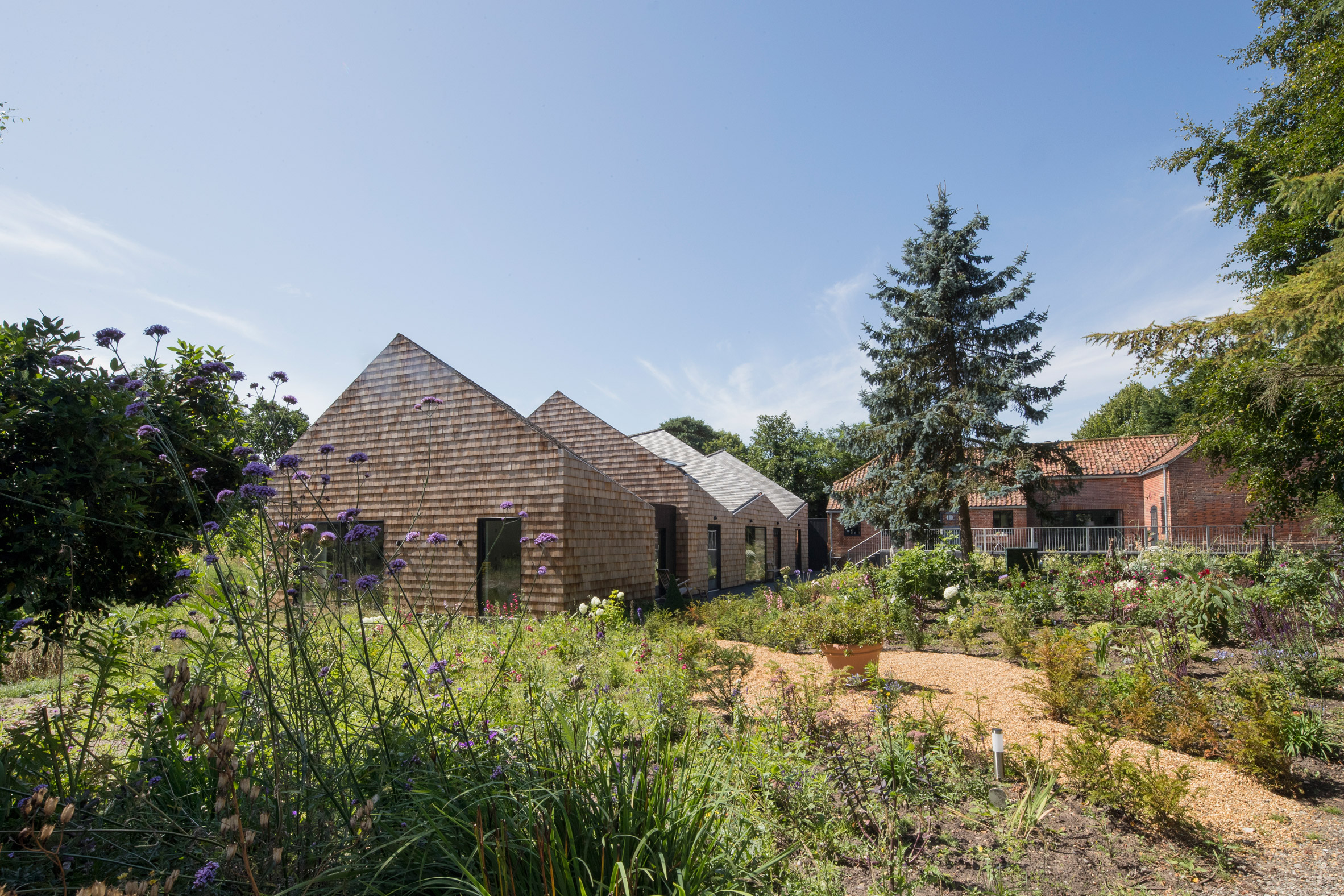 The owners of the property previously lived in Peckham, south-east London, but sold their house to start a life in the countryside.

After finding the old barn, the pair commissioned Blee Halligan Architects to transform it into a property that could become their home as well as serving as guest accommodation. 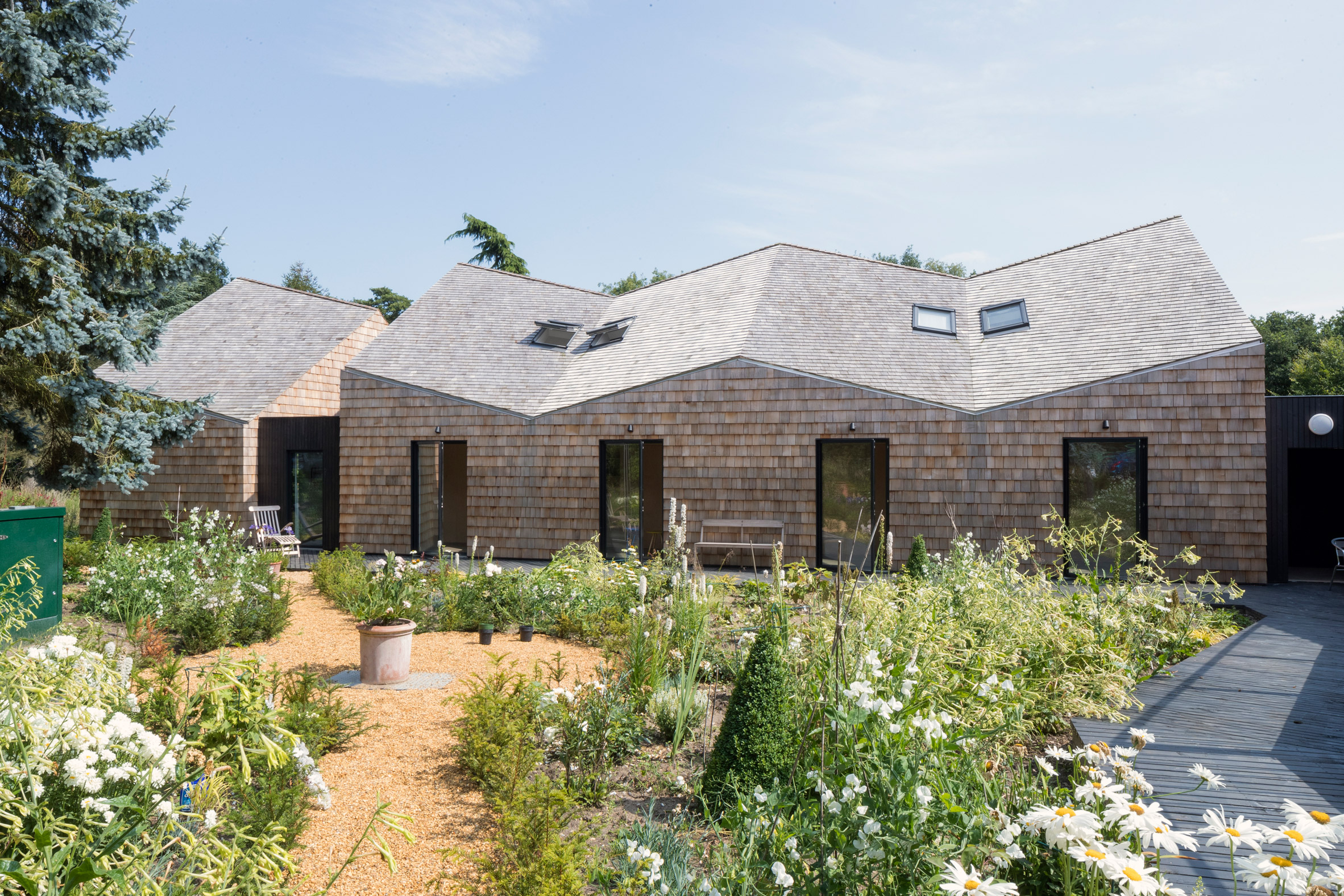 “The client brief was for internal refurbishment of the existing barn, which would be converted to house a communal living space, open-plan kitchen and owner’s accommodation,” said the practice, which is based in London and the Caribbean island of Providenciales.

“The end result elevates the collection of buildings into a simple piece of contemporary architecture, which sits comfortably in the mature landscape garden setting. This project has been a labour of love for our clients, who did much of the construction work themselves.” 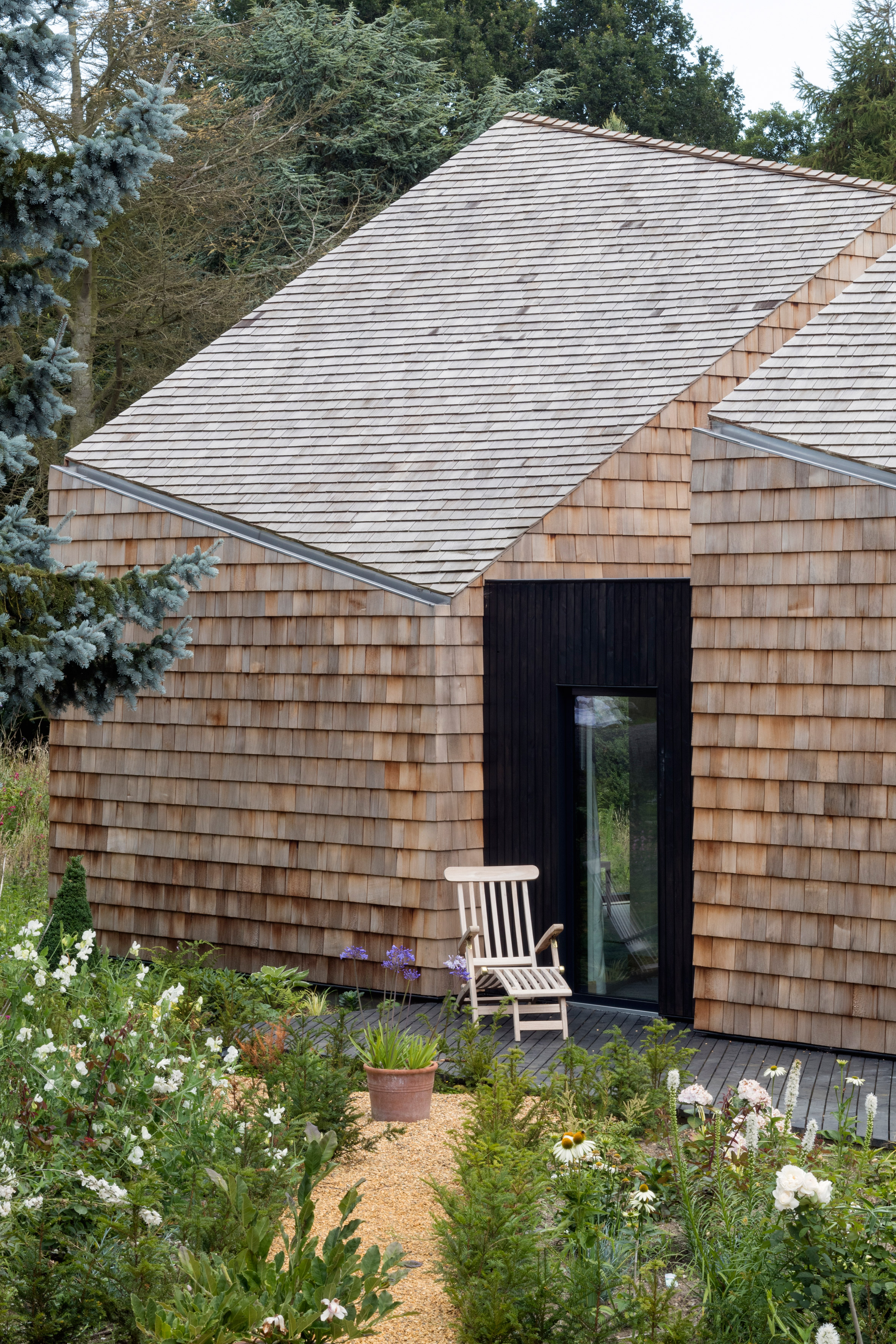 During the 1970s, the property had been extended with an annex – something the owners were keen to get rid of as it had fallen into a state of disrepair.

The architects replaced this section of the building with a new wing, which contains five en-suite guest bedrooms. 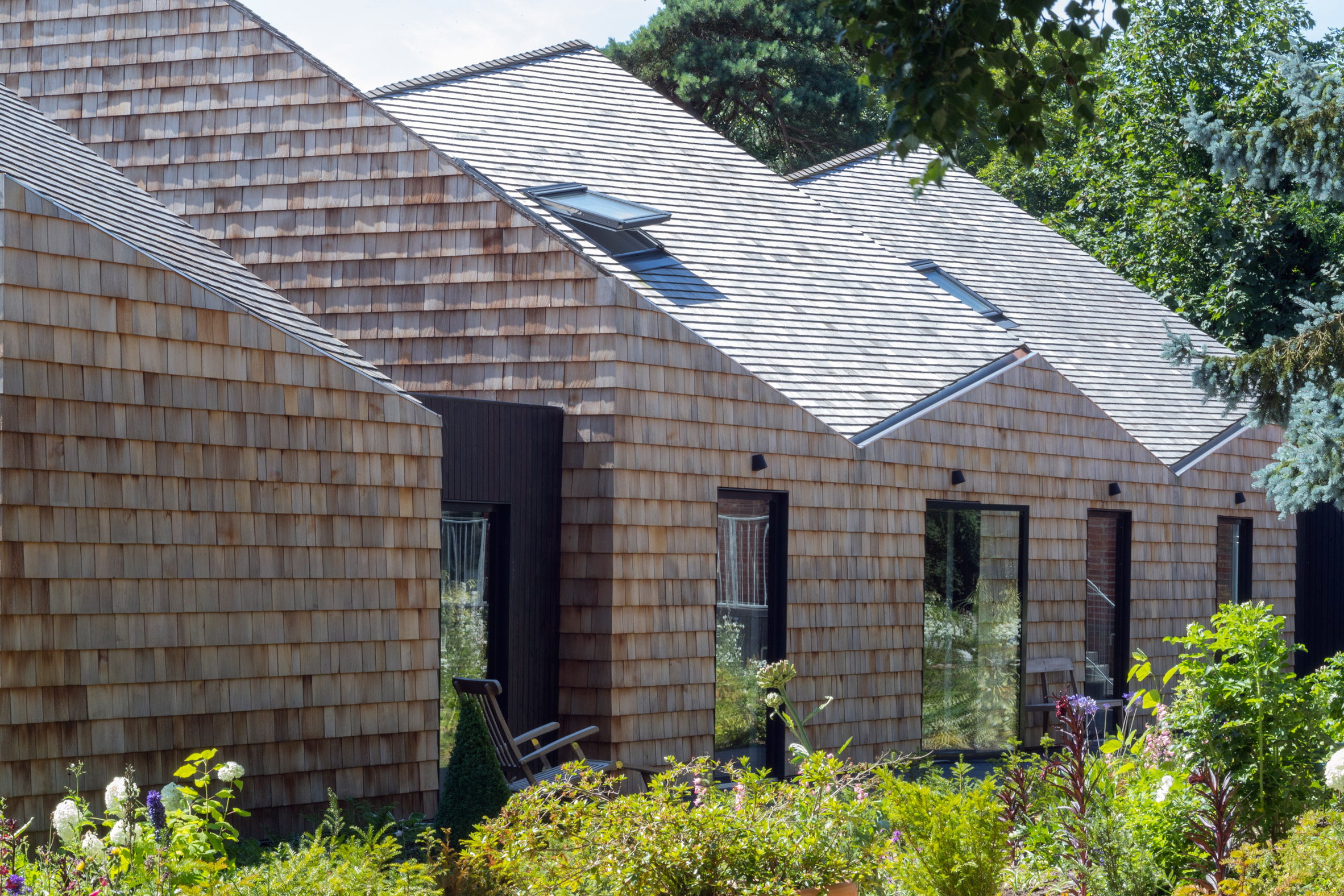 Each of these bedrooms is contained beneath separate peaks of a sawtooth roof, and features double-height living spaces to accommodate mezzanine levels for the sleeping quarters.

Mezzanines are reached by custom-made birch plywood staircases, which incorporate a desk, shelving and storage to make the most of the living space. 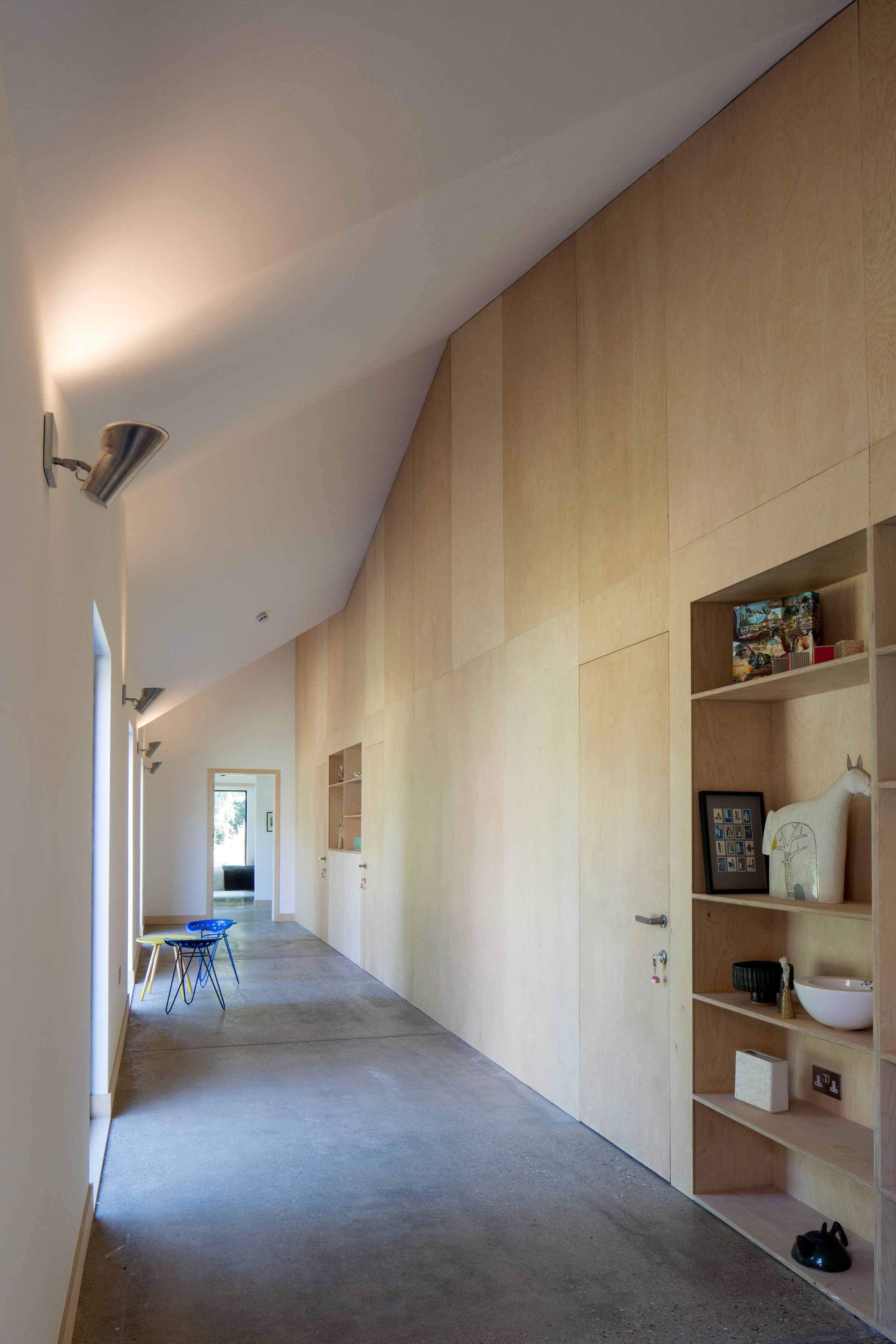 A fifth bedroom sits separate from the rest of the annex, and is accessed through a black-stained, weatherboard-clad passage. A dressing room and bathroom are also located off this passage. 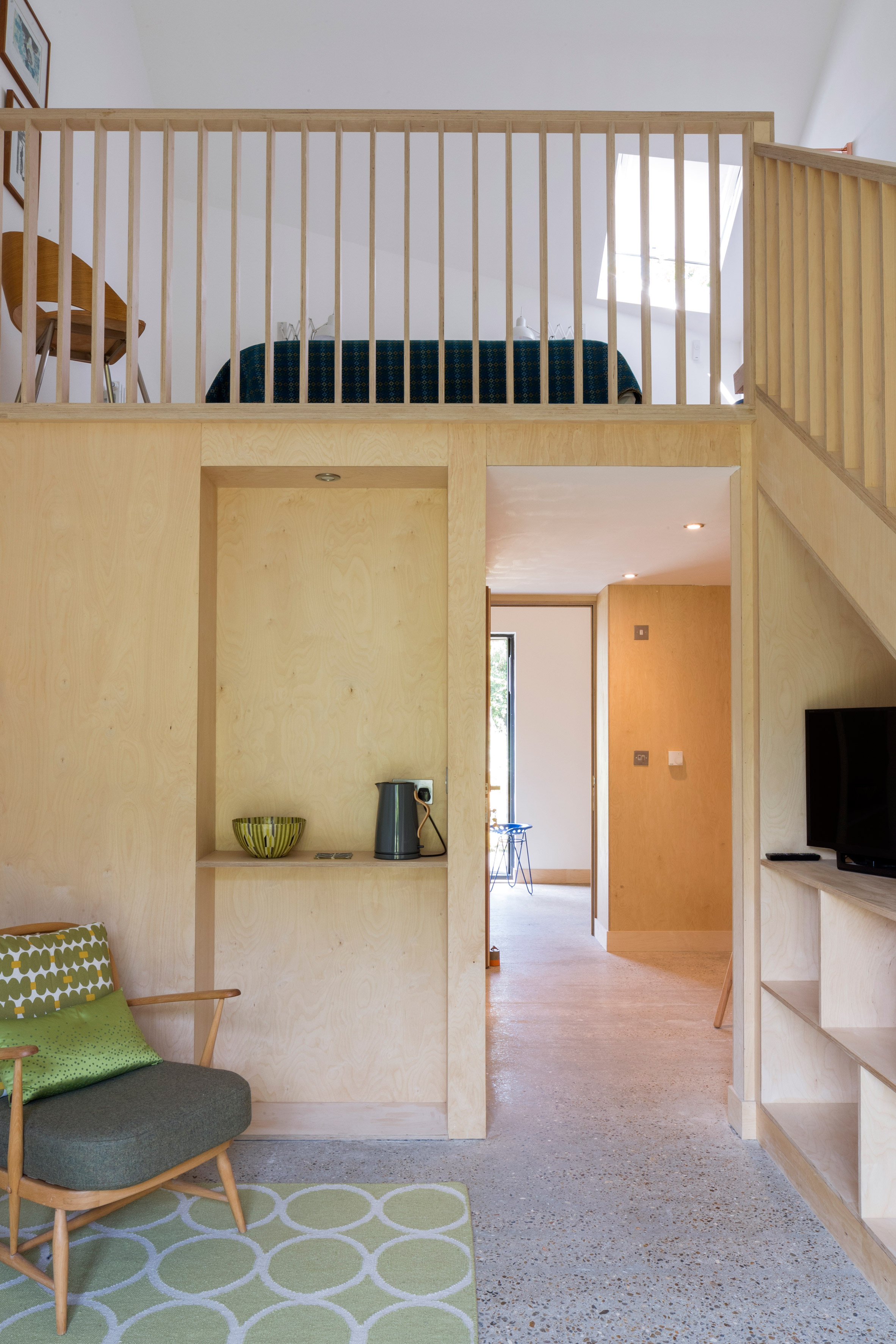 This last bedroom is the largest out of the five, and boasts six-metre-high ceilings. Grounds are visible through windows and glass doors on each facade, while a skylight allows natural light to flood the space throughout the day.

The exterior of the entire building has been clad in cedar shingles, which will silver over time to make the structure blend into its surroundings. 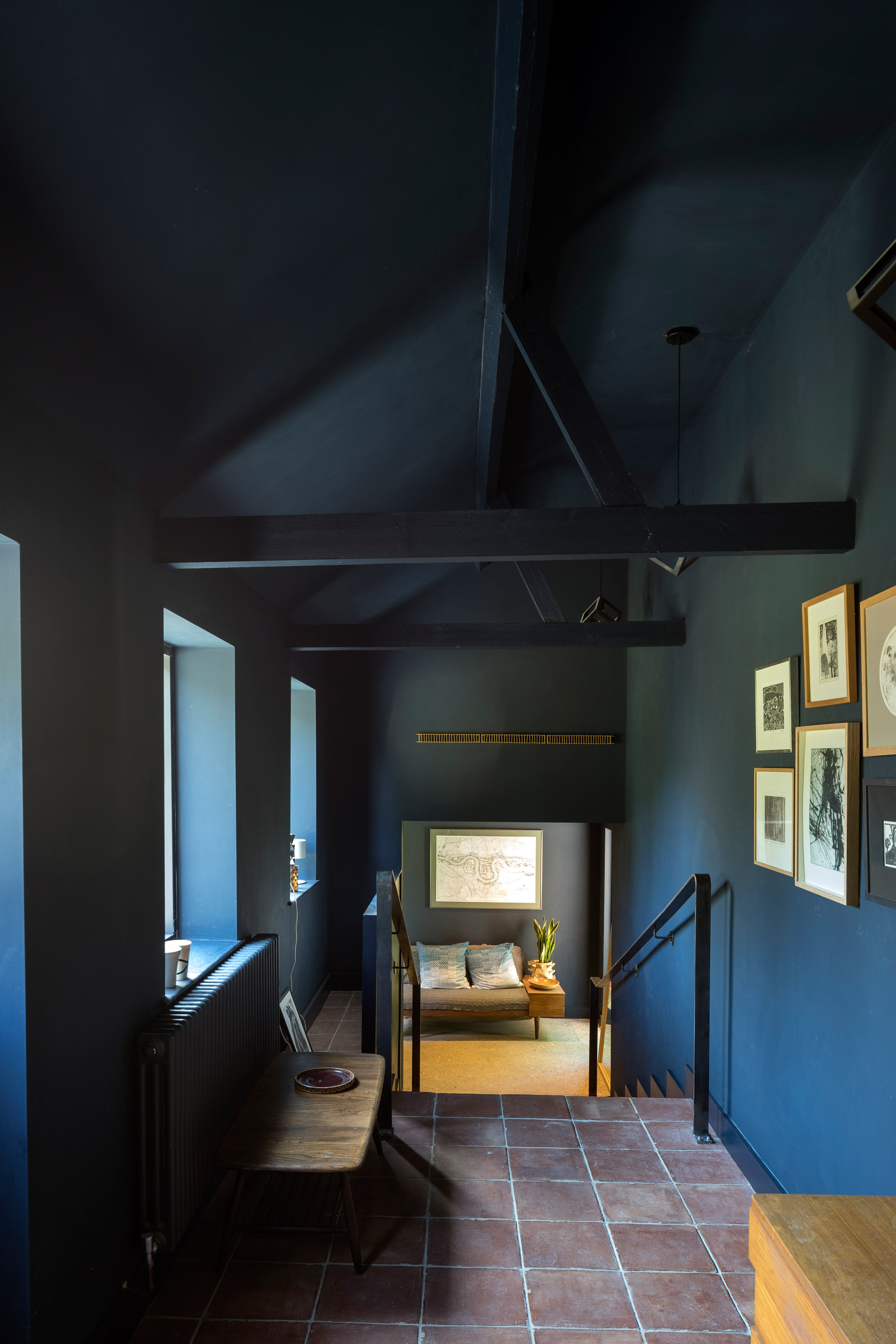 “The new building sits comfortably in the wild garden landscape and over time will weather down to a silver-grey to match the guttering, which will further emphasise the pared-down form,” said the architects.

To get to the old barn building, guests cross through a passageway clad in black-stained timber. 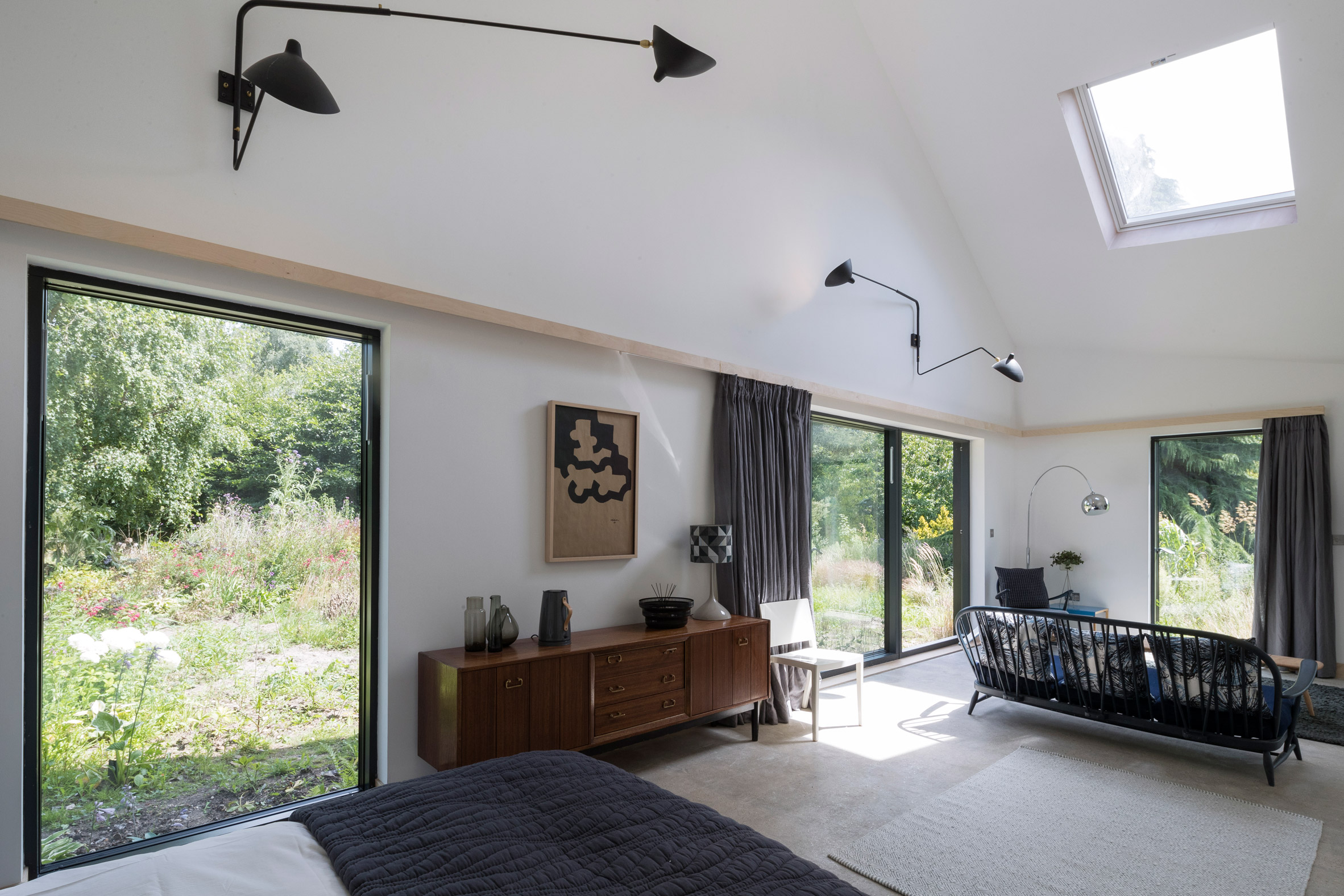 The barn, which provides the permanent living area for the owners, has been reconfigured to incorporate an open-plan kitchen, dining and living space.

The architects were keen to “enhance” the existing structure, and simply repaired old brickwork and roof tiling using found materials. 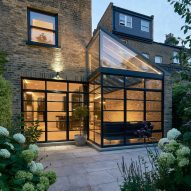 Blee Halligan Architects was co-founded by architects Greg Blee and Lee Halligan. Previously the studio extended a bungalow in Manchester, England, to include three pitched roofs that capture sunlight at different times of day and updated a north London house with a lantern-like extension.

Photography is by Sarah Blee.