Seattle architecture firm Olson Kundig has unveiled a proposal for a museum dedicated to American musician Bob Dylan in Tulsa, close to a substantial archive of his belongings.

Olson Kundig will act as lead architect for The Bob Dylan Center, after the firm was selected in an international competition for the project spearheaded by George Kaiser Family Foundation (GKFF).

Together with the University of Tulsa, GKFF facilitated the acquisition of Dylan’s substantial archive in 2016, amounting to 6,000 pieces, as well as the site for the centre.

Olson Kundig will collaborate with local firm Lilly Architects to create the centre, in addition to designing exhibits. Plains of Yonder will provide audio and multimedia experiences. 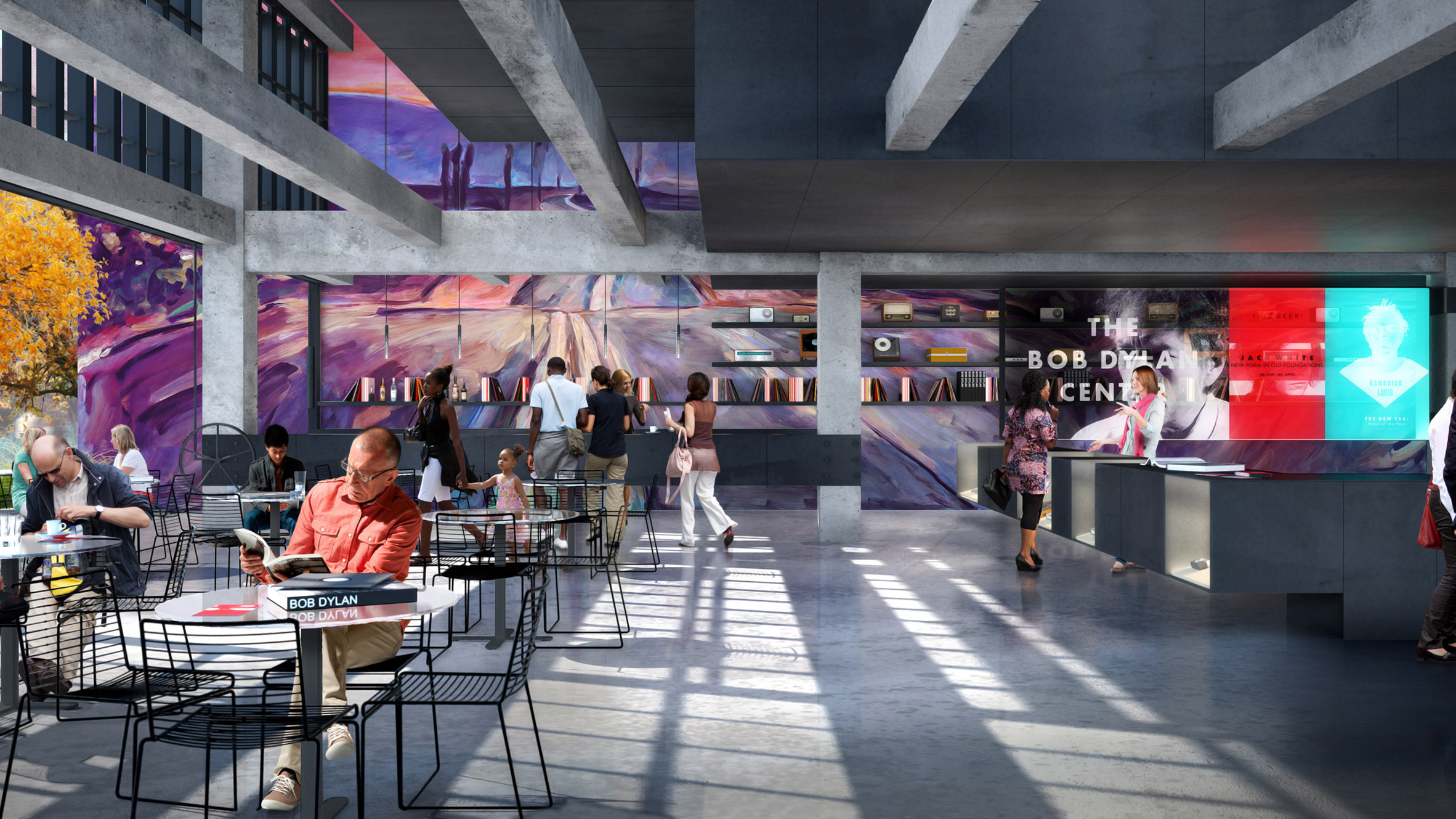 Plans for the new building include a central area with cafe chairs and tables, and a welcome desk. A colourful, purple and blue design will cover the walls.

Above, a concrete-like construction supported by pillars will form an indoor pavilion. The dimly-lit space will also feature black storage volumes and dark walls.

“This is a deeply meaningful project for us — not only acting as architectural support to Bob’s transformational legacy and creative, disciplined force, but also in preserving the teaching value of his legacy for future generations,” said Olson Kundig founding principal Tom Kundig.

Another area is designed for optimum acoustics, with a series of private wood-lined nooks. This room will also have a black ceiling and walls, while an opening at one end will connect to a patio with trees.

A quote from Dylan’s 2004 autobiography Chronicles, Volume One will be printed overhead, reading: “The little room was filled with American records and a phonograph. Izzy would let me stay back there and listen to them. I listened to as many as I could…”

The Bob Dylan Center will exhibit thousands of items spanning the musician’s career, including personal notes, photographs, videos and musical instruments. Another section, which is barely lit, will include glass-like volumes containing his belongings. 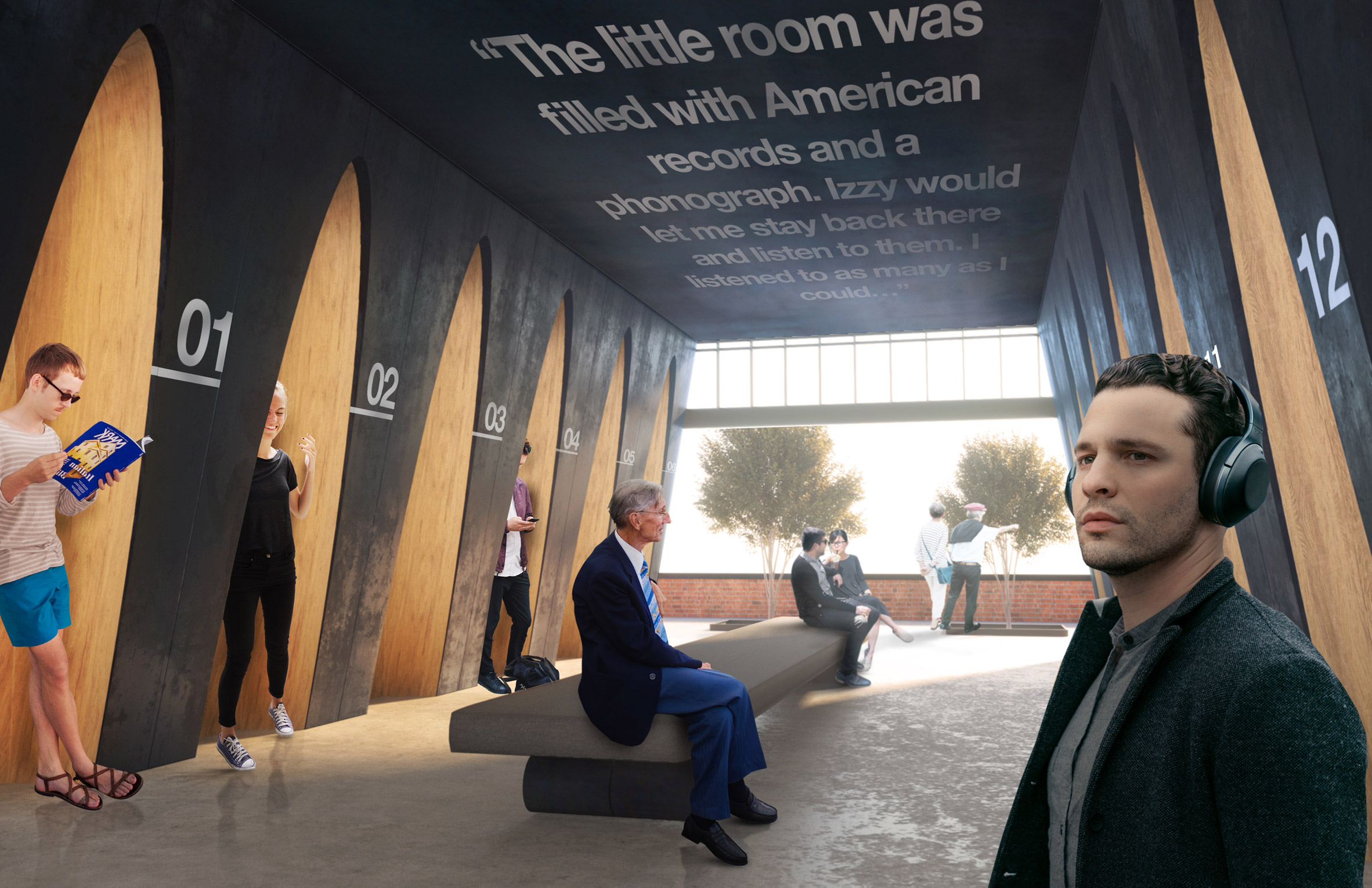 “I’m glad that my archives, which have been collected all these years, have finally found a home, and are to be included with the works of Woody Guthrie,” said Dylan. “To me, it makes a lot of sense and it’s a great honour.”

In 2013, GKFF secured a site for the building on Tulsa’s Martin Luther King Boulevard, southeast of the Woody Guthrie Center – dedicated to the Oklahoma-born musician who has a large influence on Dylan.

Dylan was born in Duluth, Minnesota and currently resides in Malibu. He is known for his folk rock songs, with hits including “Blowin’ in the Wind” and “The Times They Are a-Changin”, which were released in the 1960s and became anthems for the American Civil Rights Movement.

The centre will also interact closely with two separate facilities relating to the musician: The Bob Dylan Archive at the University of Tulsa’s Helmerich Center for American Research, and the university’s Institute for Bob Dylan Studies.