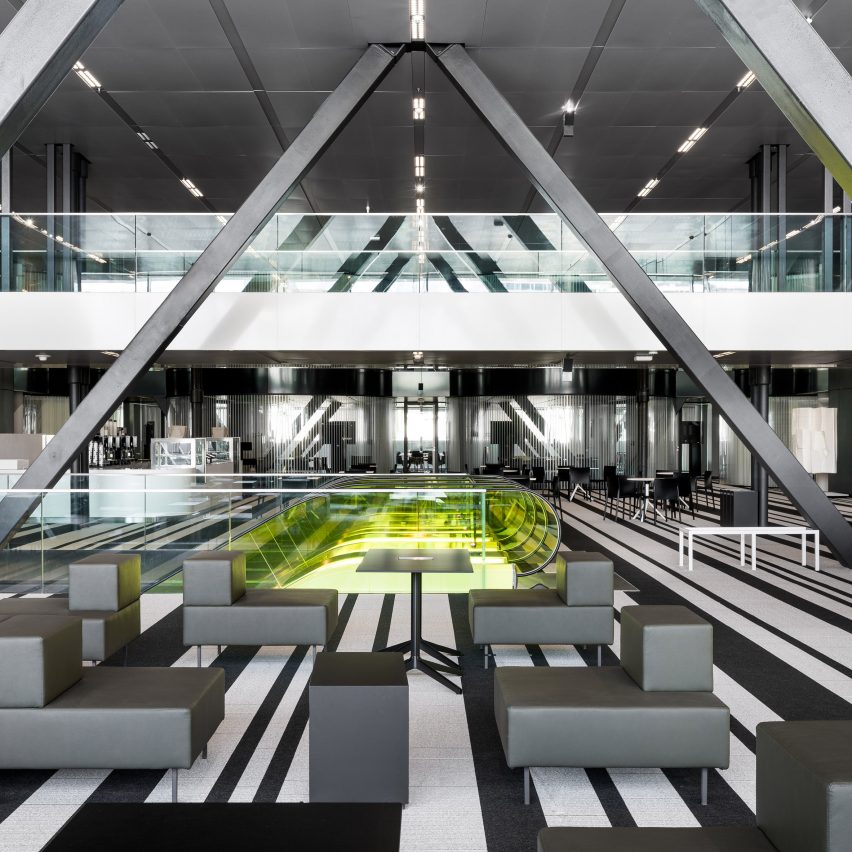 The Dutch government’s warning that dance parties might compromise the structural integrity of OMA‘s Rijnstraat 8 building has been dismissed as “an abundance of caution” by the architecture studio.

According to OMA the reported problems at Rijnstraat 8 in The Hague, which was refurbished by the studio in 2017, are due to “planning and cost-saving, not of architecture”.

The Rem Koolhaas-led practice defended its work following a memo sent to government employees working in the building warning them not to hold parties, stack paper or place a second row of chairs around meeting room tables.

A spokesperson for the Rijksvastoedbedrijf (the Central Government Real Estate Agency) told Dezeen that the memo was sent as a precaution.

Rijnstraat 8 is having it’s BubbleDeck slab flooring surveyed after a carpark under construction at Eindhoven airport that used the same prefabricated system collapsed in 2017. All buildings in the Netherlands with this flooring design are being examined in this way.

“These measures are not new but have been in place for a while, and have been taken as a precaution because safety is our priority.”

Since its refurbishment in 2017 there have been a number issues at Rijnstraat, with employees complaining of a lack of privacy and “depressing” interiors, reports the BBC.

Jeremy Higginbotham, director of public affairs at OMA, told Dezeen that it was the Dutch government’s introduction of a hot-desking system that had led to problems in the building’s operation.

Up to 6,000 civil servants have to share only 3,000 desks now that three government departments share space in Rijnstraat 8  in what OMA called a “hardcore cost-saving move”.

“We have this issue because of neoliberal economic policies in which cost savings are prioritised above all else,” continued Higginbotham.

“We warned against these issues in the design process but to no avail: ‘flex-working’ and ‘hot-desking’ have become dogma.”

Interior decoration a “matter of taste”

Overcrowding in Rijnstraat 8 has caused minor issues with the €267 million (£228 million) renovation to become overblown OMA claimed. The project, which won the ARC17 Architecture Award for sustainability, was overseen by the architect Ellen van Loon.

“Because of the larger problems with the government’s hot-desking policy, a few isolated complaints about the building have been amplified to look like systemic problems, which they are not,” said Higginbotham.

“Workspaces are flooded with daylight and our colour scheme is based on that of the original architect Jan Hoogstad, which included black cores. Use of this colour is a matter of taste, and in agreement with the users, we have already changed the lift lobbies to a light colour.”

The architecture studio said that the contractor was working to rectify construction issues with the stairs.

Photography is by Delfino Sisto Legnani and Marco Cappelletti.

The post OMA hits back over dance ban at its Rijnstraat 8 office building in The Hague appeared first on Dezeen.