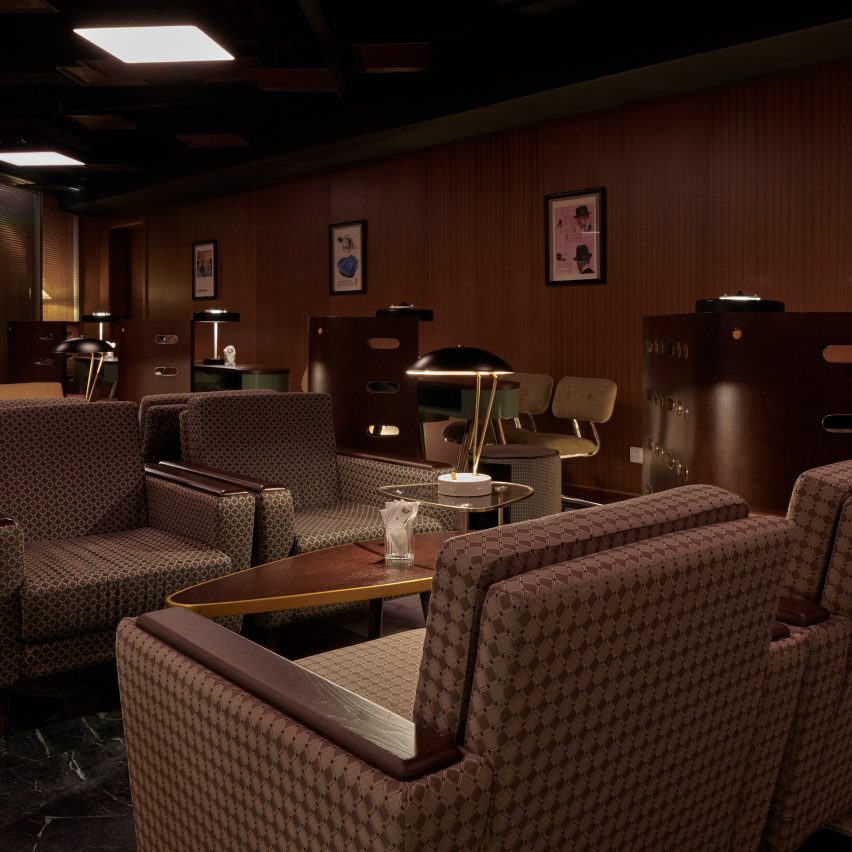 The TV show Mad Men informed the retro feel of this bar in Guangzhou, China, which designer Vinki Li has finished with wood-panelled walls, marble floors and plush mid-century furniture.

Li – who is based in Hong Kong – had been told to make the interiors of Out Of Office unlike any other bar in Guangzhou, so she looked to foreign films and television shows for aesthetic inspiration.

Her main point of reference ended up being Mad Men – a TV series which follows the life and times of Don Draper, a creative director working at an advertising agency on New York’s Madison Avenue during the 1960s.

Not only is Li a fan of the show, but she liked that its 1960s setting would give her the opportunity to showcase mid-century furnishings inside Out Of Office.

“I have always been a big fan of mid-century architecture and designs, I considered it very timeless, well-designed…it still feels fresh today,” she told Dezeen.

Li named the bar after season one, episode 13 of Mad Men, in which protagonist Draper leaves the office for the evening and remaining staff members throw a revelrous, alcohol-fuelled party in anticipation of presidential election results.

“I wanted to create a similar atmosphere when guests come to unwind after working during the day, a feeling of the boss not being here,” added Li.

Guests enter Out Of Office via a grey tiled lobby that’s been styled to resemble a secretary’s office, complete with shuttered window blinds.

At the centre of the space is a glass-topped desk scattered with paraphernalia that would have appeared in workplaces of the 1960s, such as a typewriter and a rotary dial telephone.

The desk backs onto a tall shelving unit featuring artsy ornaments, leather-bound books and a globe. In the corner of the lobby there’s also a coat rack, off which a suit jacket, tie and fedora hat have been hung.

A door leads through to the main bar, where Li has used a palette of rich, dark materials that she felt evoked the “machismo of executive boardrooms”.

While the floor boasts a mix of murky-green Kesariyaji marble and white Statuario marble, walls have been lined with cherry wood.

Vintage advertisements have been mounted as decoration.

The base of the drinks counter is crafted from high-gloss stainless steel and inlaid with strips of caramel-coloured velvet. In front runs a row of stool seats upholstered in chocolate-brown leather.

Alternatively, guests can choose to sit in one of the heavy mid-century armchairs that have been placed at the centre of the bar.

Extra clusters of seating run down the side of the room and are hidden by walnut and brass partitions – much like how desk cubicles were screened-off in 1960s offices.

A select few are able to enjoy their drinks in Out Of Office’s VIP room. It boasts deep-red sofas and a gridded cabinet that displays special whiskies inside illuminated box shelves.

The world of television and film offers a wealth of inspiration to designers and architects.

Earlier this year, Spanish studio Masquespacio created a co-working space in Valencia that draws on a scene from the 1960s film Playtime. British architect Adam Richards also modelled the layout of his home in Petworth, England around the story of post-apocalyptic flick Stalker.

The post Out Of Office is a Mad Men-inspired drinks bar in Guangzhou appeared first on Dezeen.