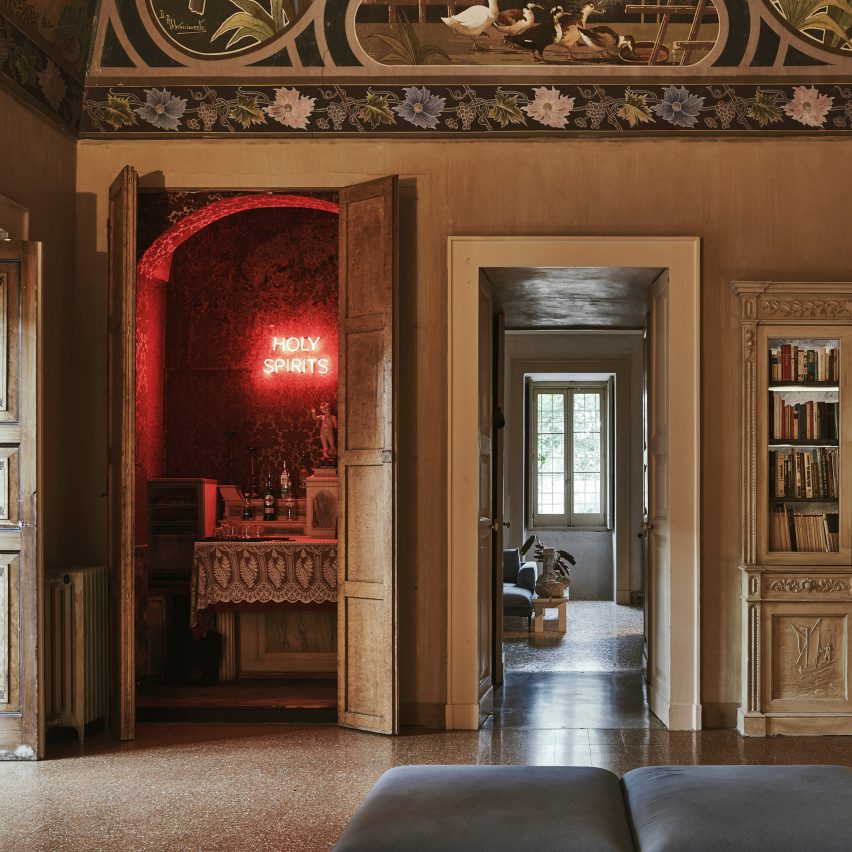 Architect Roberto Palomba describes his firm’s approach to renovating the Palazzo Daniele hotel in Puglia, Italy, in this video produced by Dezeen for the AHEAD Awards.

Palazzo Daniele, which was named Hotel of the Year at the 2019 AHEAD Europe hospitality awards, is a nine-suite boutique hotel housed in a 158-year-old palazzo located near the southern tip of the Salento peninsula in Puglia.

The project was also awarded for its guest rooms at the a ceremony that took place in London in November.

The renovation of the building was handled by Palomba Serafini Associati, the architecture practice that Palomba runs with his partner Ludovica Serafini.

Rooms and public spaces host the hotel owner’s art collection. A number of frescoes on the walls and ceilings were restored during the renovation.

“When we found the building it was in a very bad condition,” says Palomba in the video interview, which was shot by Dezeen at White City House in London.

“The whole renovation was quite complicated because we had to save some parts of the paintings on the walls or on the ceiling.”

Palomba Serafini Associati took a sparing approach to furnishing the space in order to draw attention to the building’s historic structure.

“All the rooms are really pure,” he said. “There is not much furniture, we tried to reduce it to the maximum.”

“You really feel that you are in a contemporary place with an ancient structure.”

According to Palomba, the approach to the design of the space went beyond aesthetics to a holistic approach to guest experience.

Amongst the hotel’s  personal features is a kitchen that acts as the social centre of the building, where guests can discuss the day’s menu with the chefs and try their hand at cooking.

Palomba says that guests are increasingly seeking out such experiences rather than material luxuries.

“[People] don’t want to see another room in another hotel – they want to be part of an experience that is completely different,” he said.

“For us it was very important to create this sort of experience, not just to have a nice design.”

This video was produced by Dezeen for AHEAD. It was filmed at White City House in London.

Photography is by Adrian Gaut, courtesy of Palomba Serafini Associati.

The post Palazzo Daniele is a “contemporary place with an ancient structure” appeared first on Dezeen.