Plants and trees sprout from the modular units that make up this timber-framed high-rise, proposed by architecture firm Penda for Toronto. 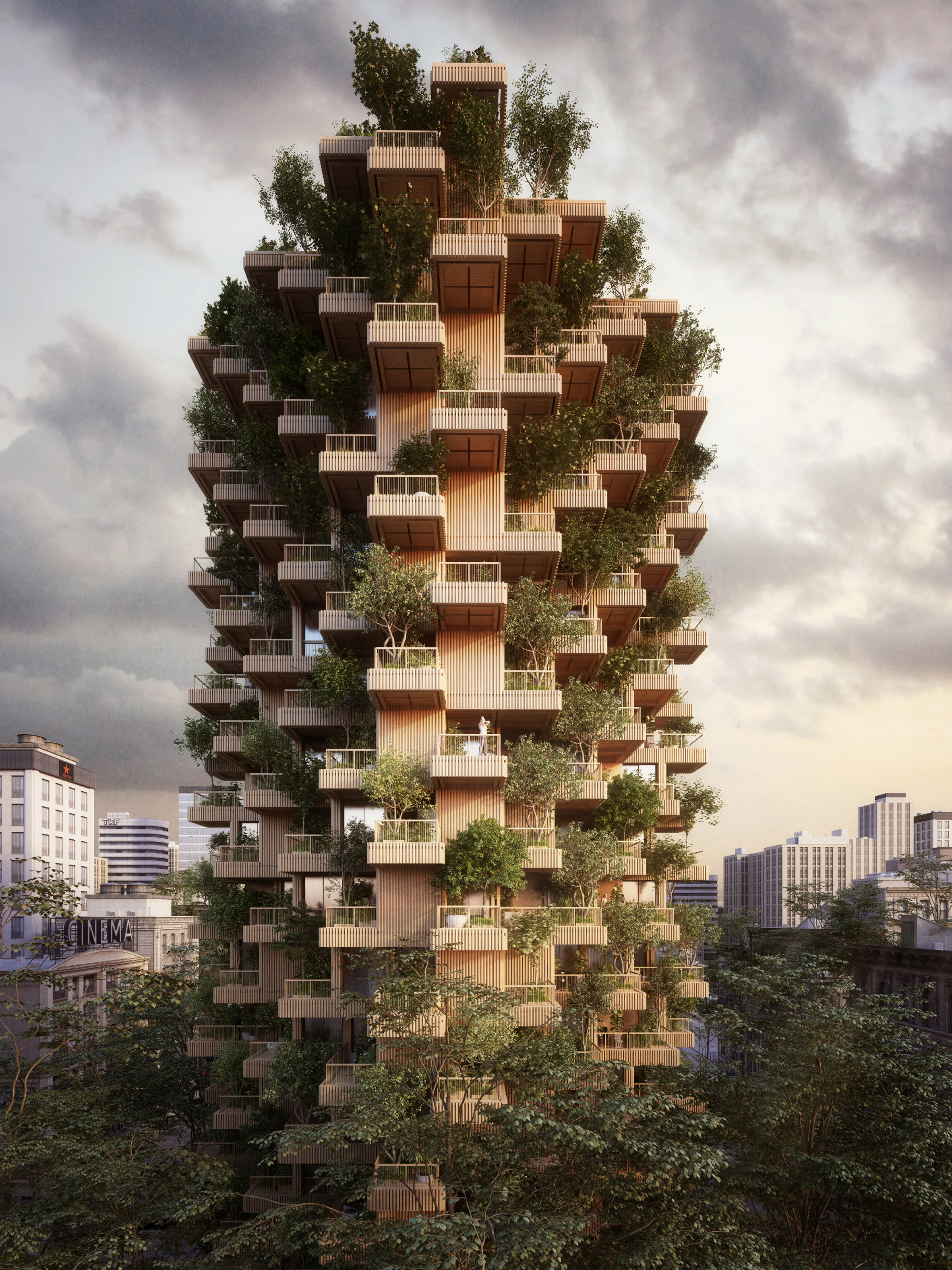 Penda, which has offices in China and Austria, collaborated with Canadian company Tmber for the Toronto Tree Tower project. They propose an 18-storey residential block that would stand 62 metres tall, with a modular structure made from cross-laminated timber (CLT).

Wood would also clad the building’s staggered walls, and trees would grow from the homes’ generous balconies. 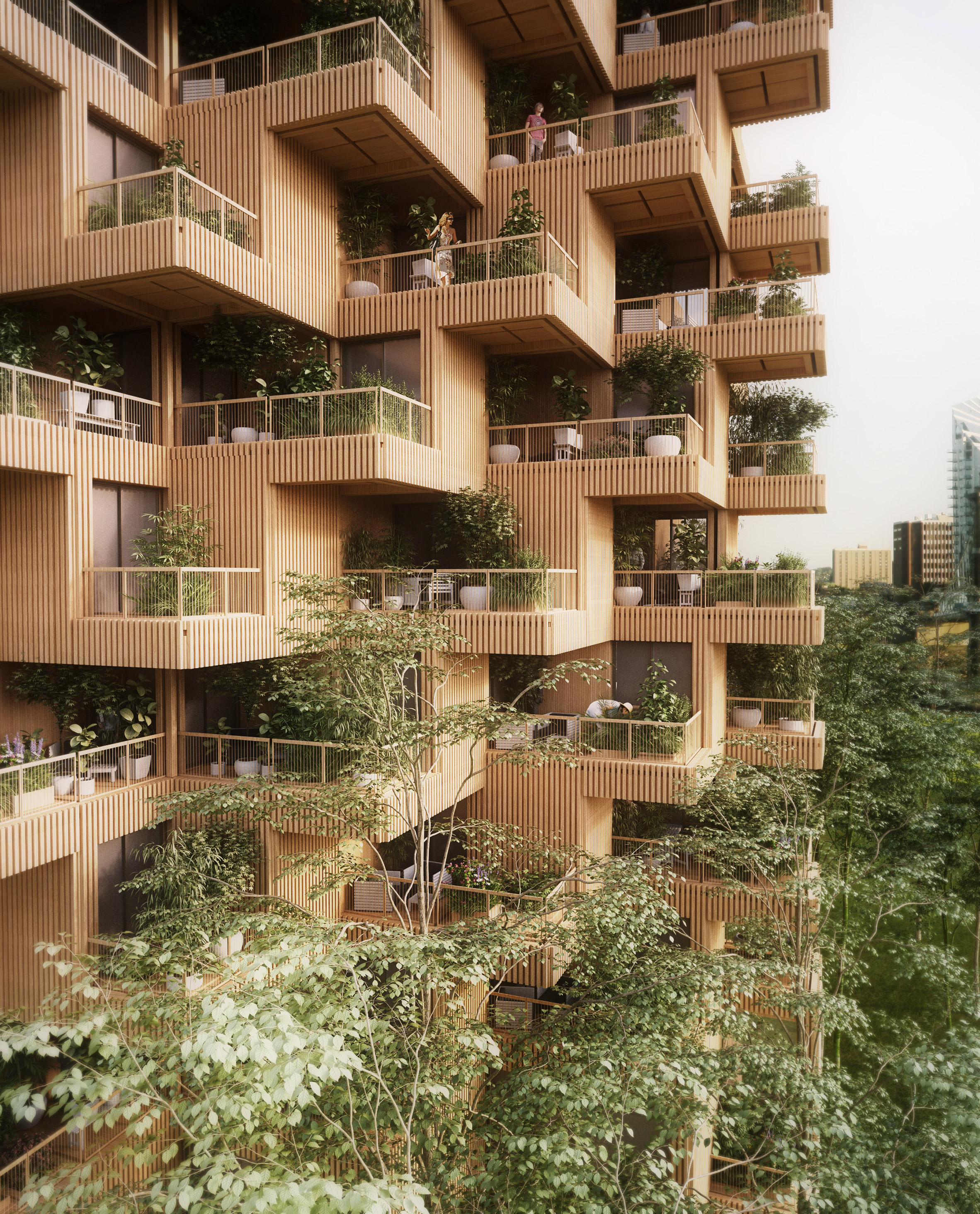 “Our cities are a assembly of steel, concrete and glass,” said Penda partner Chris Precht. “If you walk through the city and suddenly see a tower made of wood and plants, it will create an interesting contrast.”

“The warm, natural appearance of wood and the plants growing on its facade bring the building to life and that could be a model for environmental friendly developments and sustainable extensions of our urban landscape,” he added. 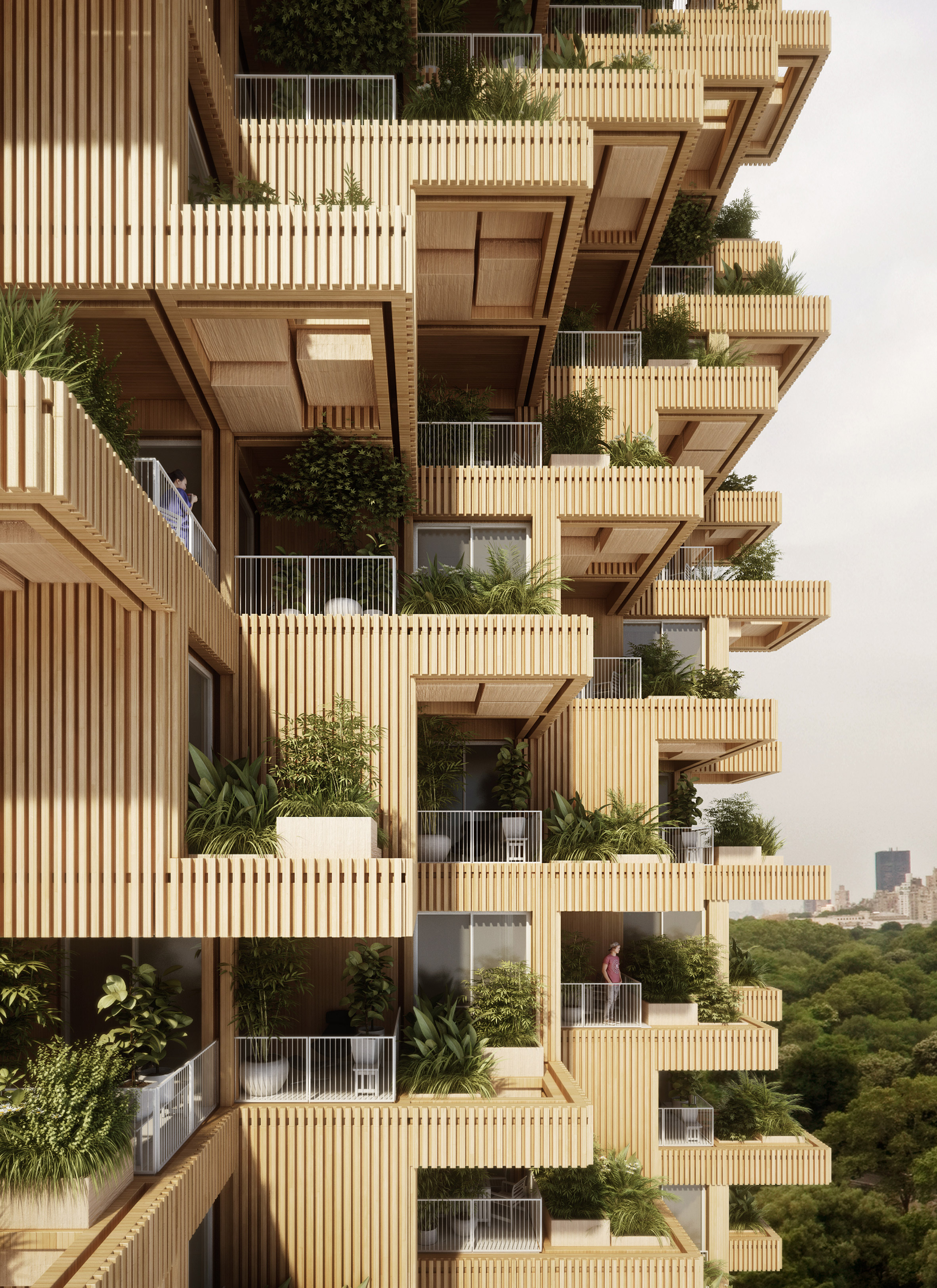 The firm is renowned for incorporating plants into its architecture. A modular hotel built from bamboo, a tower in India with hanging-garden facades, and a vast network of plant-filled building blocks for Beijing’s horticultural expo are among recent proposals. 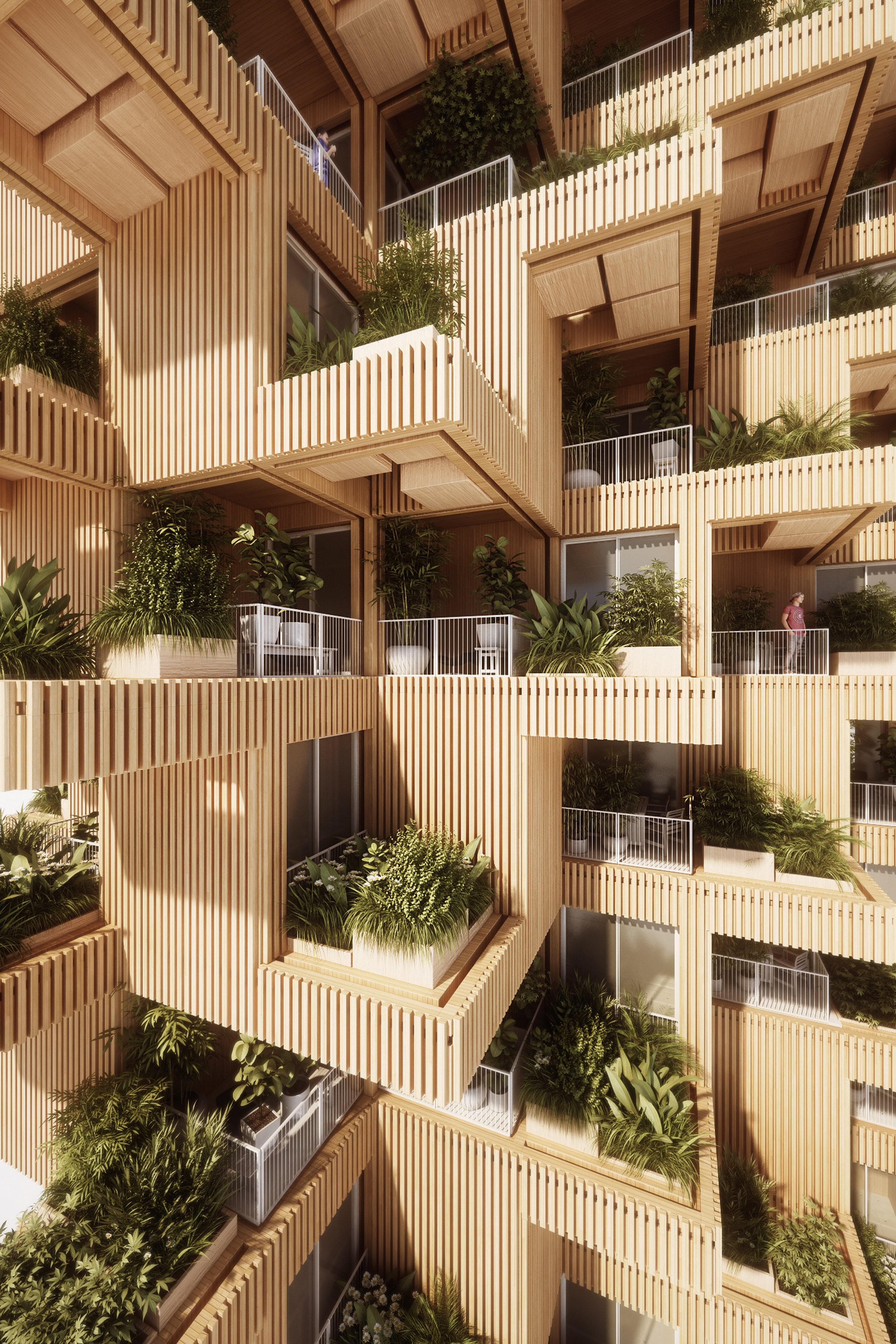 Its staggered-block layout nods to Moshe Safdie’s brutalist Habitat 67 housing in Montreal, which has become a model for many prefabricated development that provide each residence with private outdoor space.

The tower’s CLT units would be assembled off-site, then delivered and stacked onto the foundations and around the central core. Afterwards, wooden facade panels would be installed and sealed. 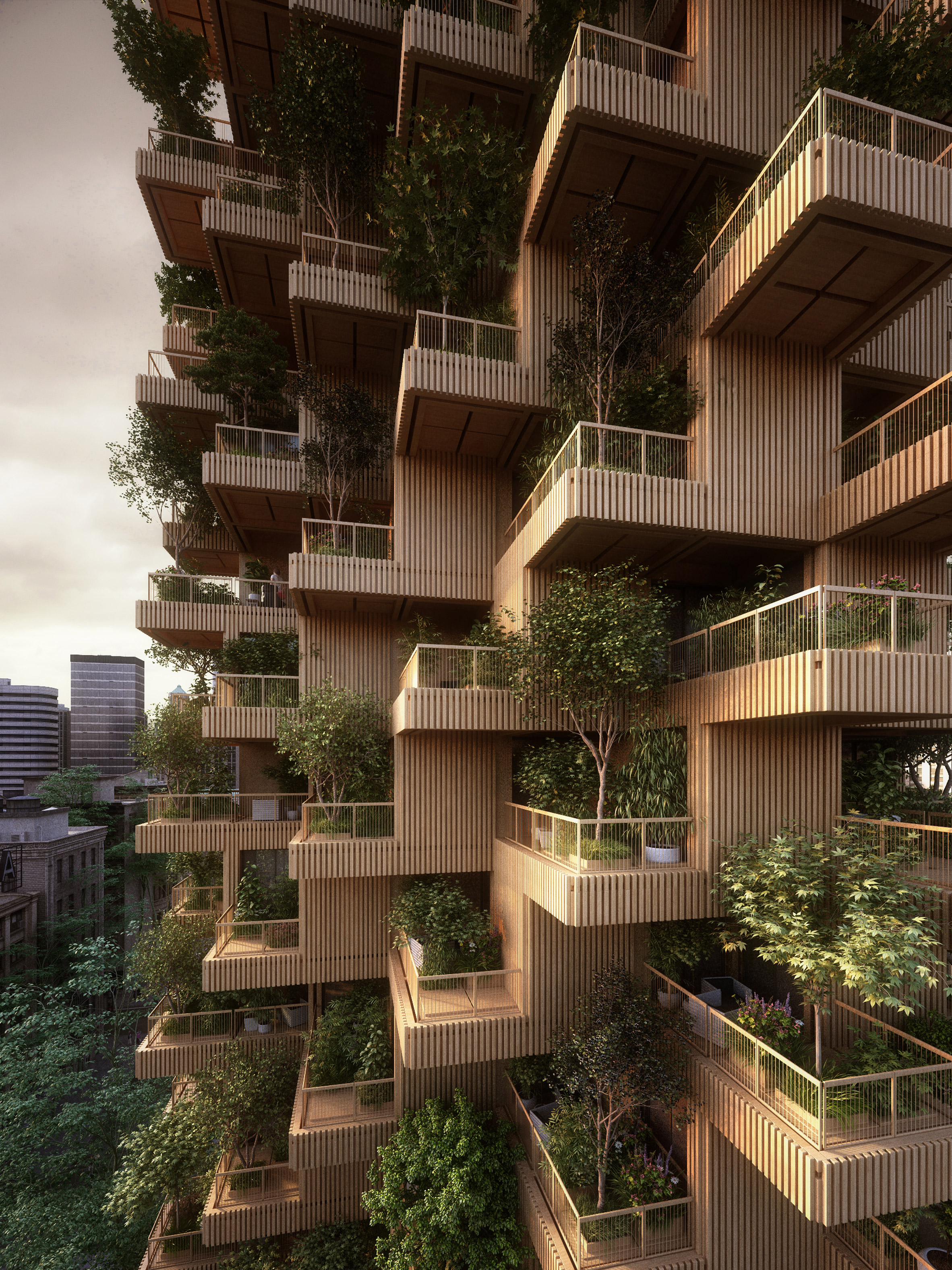 Penda favours this method of construction as it is faster, quieter, uses less waste and is more environmentally friendly.

Architects predict that CLT and other engineered timbers will take over from concrete and glass as this century’s architectural “wonder Material”. 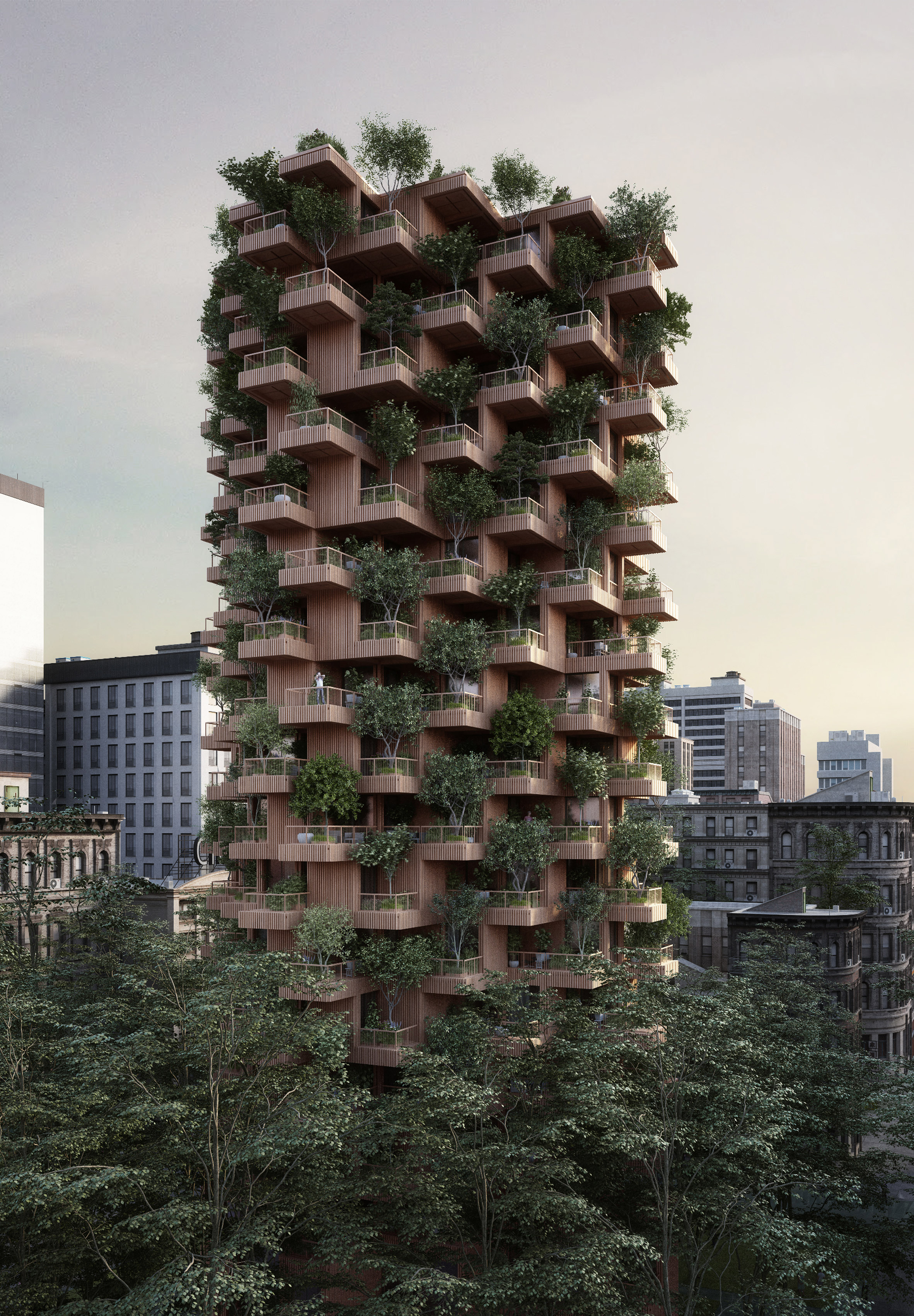 With an abundance of natural resources, Canada is one of the countries at the forefront of high-rise CLT construction. In Vancouver, Shigeru Ban is working on what he claims is the “world’s tallest hybrid timber structure”.

A recent report showed that Europe is leading the charge in CLT-framed high-rises, with buildings springing up in France, Austria and Norway. Australia also allowed the construction of timber-framed structures up to eight storeys high for the first time last year. 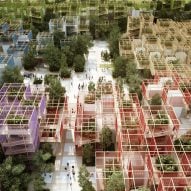