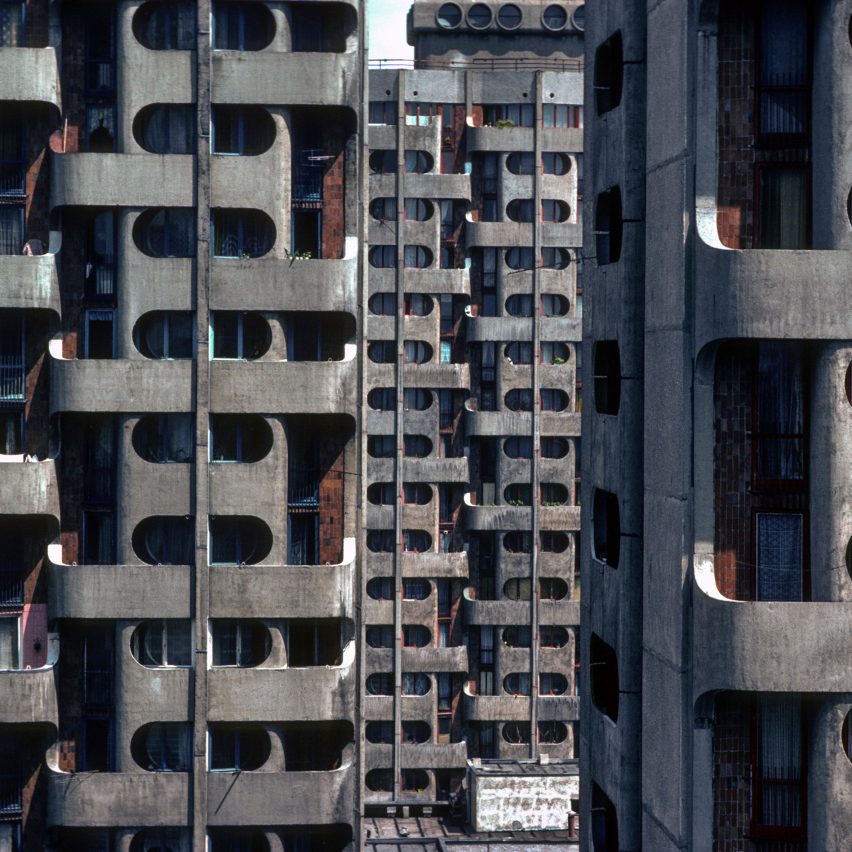 A scale model of a concrete housing complex features alongside architectural photography in this New York exhibition, detailing the works of Polish modernist architect Jadwiga Grabowska-Hawrylak.

Patchwork: The Architecture of Jadwiga Grabowska-Hawrylak is currently on show at the American Institute of Architects‘ (AIA) Center for Architecture in Manhattan’s Greenwich Village.

AIA‘s New York outpost organised the retrospective in collaboration with curators Michał Duda and Małgorzata Devosges-Cuber of the Museum of Architecture in Wrocław.

It marks the first comprehensive presentation of the work produced by the late architect, who is billed as “one of the most important Polish architects of the 20th century”, outside of Poland.

Photographs, models and images in the exhibit detail Grabowska-Hawrylak’s lengthy career, with projects ranging from 1954 to 1993.

Among her accomplishments include a slew of housing estates and schools, built across Poland. She was also a key participant in rebuilding Wrocław after it severely destroyed in the second world war.

“From her participation in Wrocław’s post-war reconstruction in the 1950s, to her modernist designs of the 1960s and 70s, and the postmodern aesthetic adopted in her later work in the 80s and 90s, Grabowska-Hawrylak’s career reflects the changing politics and culture of Poland,” said a description from the exhibit.

Patchwork spans two levels at AIA‘s centre in Manhattan’s Greenwich Village. At the entrance, a central room is wrapped with digital screens that display buildings by Grabowska-Hawrylak.

Anchoring the space is a table topped with dozens of building models. Drawers underneath the table pull out to reveal additional information, as well as plans and diagrams.

A focal point of the exhibit is a scale model of the Grunwaldzki Square housing complex, which she completed in Wrocław in 1973.

The complex is one of Grabowska-Hawrylak’s best-known works. It led to her becoming the first woman to be awarded the most prestigious architecture prize in Poland, the Honorary Award from the Association of Polish Architects (SARP), in 1974.

In the exhibition, the replica details one of the project’s many towers, based on prefabricated concrete volumes with curved patios.

The development – commonly referred is referred to as “Manhattan” in Wrocław, or sedesowce – was, however, originally designed to be white. This never transpired and, as a result, has been associated with the brutalist architectural style, much to Grabowska-Hawrylak’s misgivings.

“These buildings are considered one of the best examples of brutalism in Poland, but Jadwiga Grabowska-Hawrylak hated brutalism,” curator Duda told Dezeen at the exhibit’s opening on 28 February 2019.

“She just wanted it to be sleek and smooth,” he continued. “That concrete was designed as a white concrete, and covered in plants.”

In recent years, the complex has been painted white to honour the architect’s initial design.

Jadwiga Grabowska-Hawrylak was born on 29 October 1920 in Tarnawce, and studied architecture in Wrocław. Another of her key works is the Millenium Memorial Church of the Wrocław Diocese, which features a large gabled brick structure topped with a minimal, angular frame.

The exhibit is titled Patchwork because Grabowska-Hawrylak moved onto quilts after decades spent practising as an architect. When Duda met with her to discuss the exhibit, she dismissed the idea of it focusing solely on her architecture.

Patchwork was initially displayed at the Museum of Architecture in Wrocław, and the inaugural show featured her quiltwork alongside her buildings.

Duda has also written a book, titled the name of the exhibition, that outlines the story of Grabowska-Hawrylak as well as Wrocław.

“We have a very strong and long tradition of women architects (in Poland), but all of these ladies were very close with cooperating with male architect husbands,” Duda said. “Jadwiga was an exception; she did it all on her own.”

“Unfortunately, Jadwiga passed away last year (in 2018), and you cannot imagine how proud she would be if she could be here,” Duda concluded.

Patchwork is on display at AIA’s Center for Architecture in Greenwich Village from 28 February until 18 May 2019.

Photography is by Anna Morgowicz, unless stated otherwise. Images courtesy of the AIA and the Museum of Architecture in Wrocław