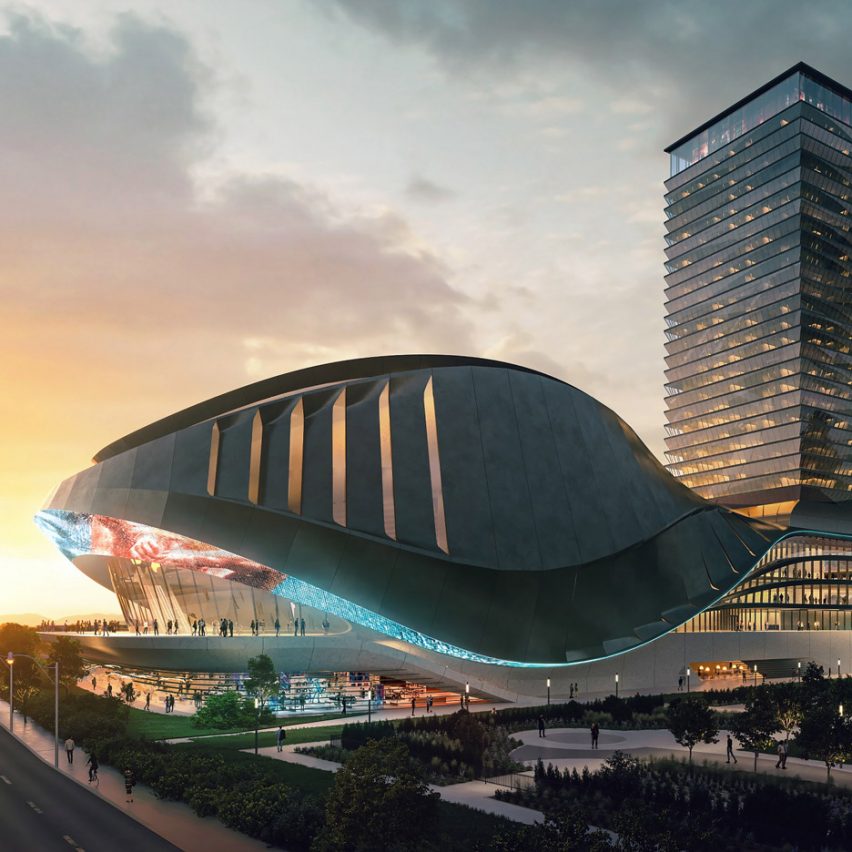 Architecture studio Populous has unveiled visuals of a multi-purpose arena in Toronto, Canada, designed to be able to host music concerts, plays and esports competitions.

Due to complete in 2025, the 7,000-seat stadium will be located in the Canadian National Exhibition (CNE) Grounds.

The as-yet-unnamed Toronto venue will be specially designed to facilitate esports events, short for electronic sports – competitive video gaming as a spectator event.

Populous has designed the stadium so that it can host these events alongside more traditional theatrical events and concerts.

“The design of the theatre was neither conceived as a sports arena nor an opera house, rather, a new typology that straddles the two – a state-of-the-art performance venue,” said Populous senior principal Jonathan Mallie

“The theatre architecture creates a merger of the old and the new.”

Renders show a covered arena sheltered by a swooping roof that recalls the form of a turtle’s shell or a space ship.

Multiple stories are visible behind curved glass walls and an exterior deck projects from one end. Around the rim of the stadium roof, a wide band of screens forms a media facade.

Developer OverActive Media is the owner of global esport franchises including Toronto’s teams: Toronto Ultra of the Call of Duty League and Toronto Defiant of the Overwatch League.

“It has always been our intention to develop a venue and hosting strategy and to build a facility that could not only serve as an iconic home for our two franchises but ultimately emerge as a global hub for major international esport events,” said OverActive Media CEO Chris Overholt.

“We are already in active discussions to attract some of the biggest esport events in the world. This venue will redefine Toronto’s event hosting opportunities in every way,” he added.

Populous has designed stadiums such as the Tottenham Hotspur Stadium in London, which can host both Premier league football matches and American football games, and the Hard Rock Stadium in Miami.

Upcoming projects from the design firm include a stadium in Strasburg made out of decommissioned aircraft fuselage, and spherical venues for London and Las Vegas.