Mexican architecture studio Productora has attached a two-storey steel unit onto the back of a bungalow in California to add more living space. 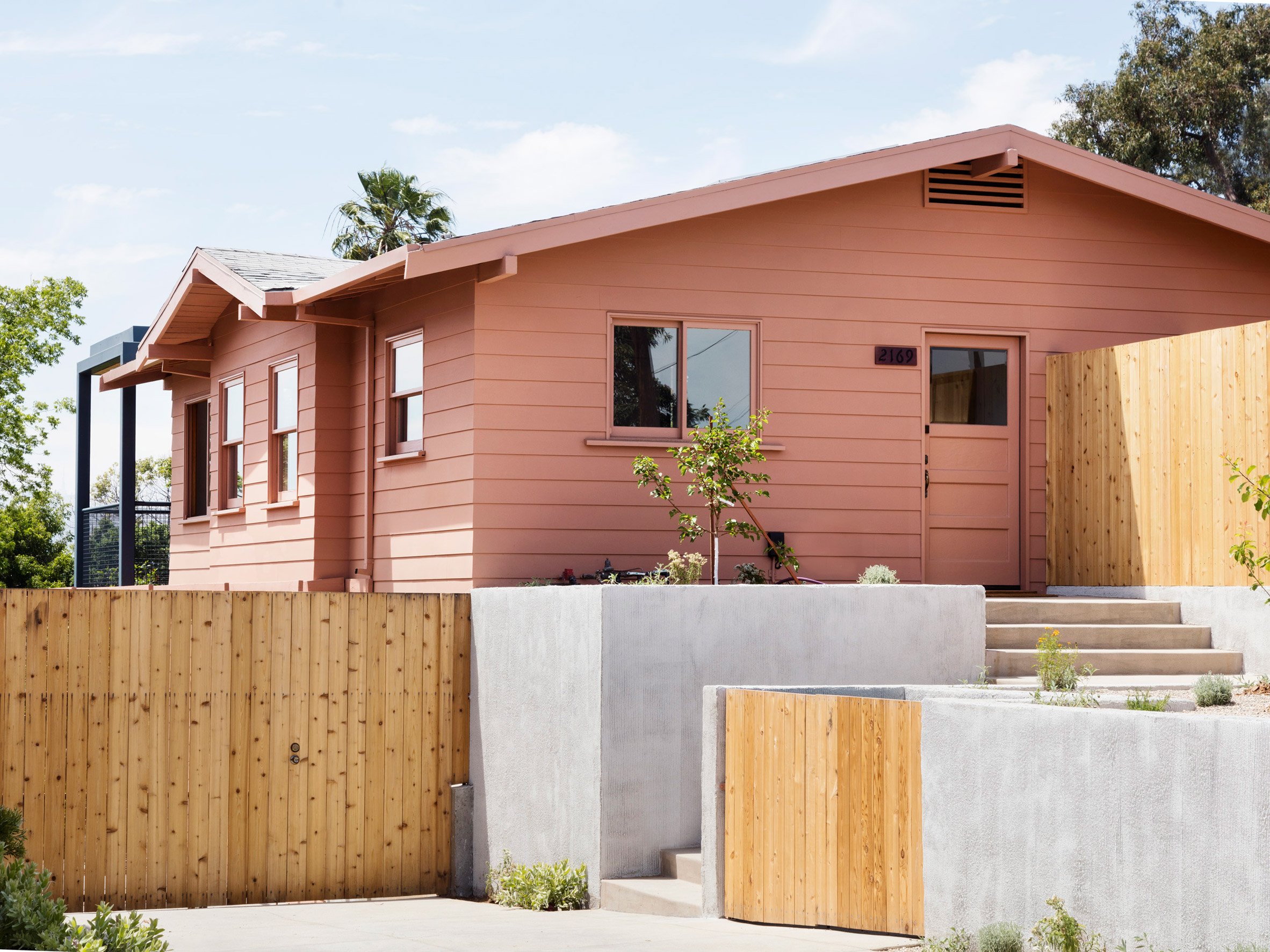 Fleischmann House is located in Echo Park, Los Angeles, on a sloped lot that was previously underused.

The entire project, which measures 2370 square feet (500 square metres), included a complete remodel of a 1920s bungalow with a back-end addition and an excavated crawlspace on the front of the house. 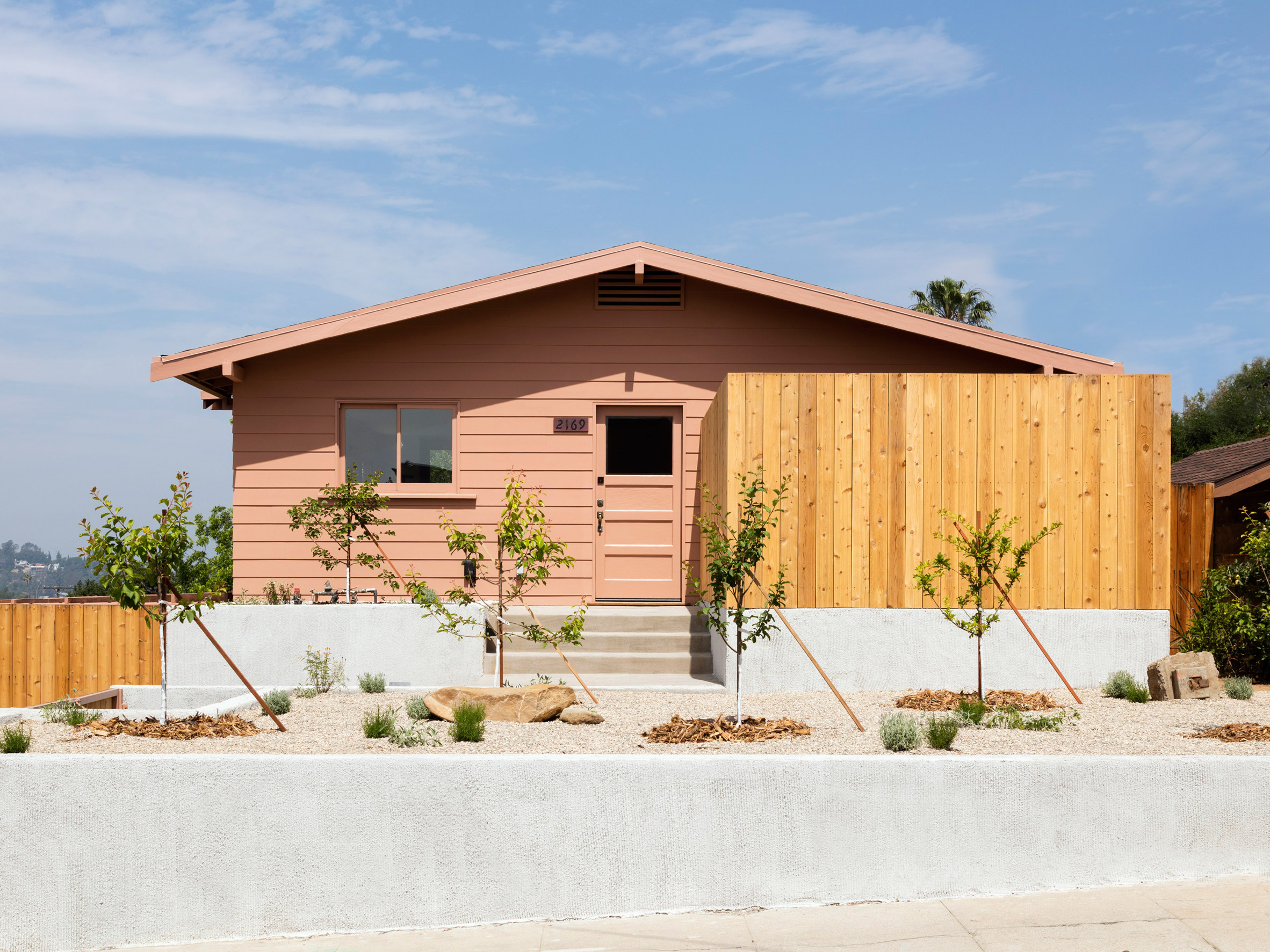 Productora attached a steel frame onto the back of the home to create more living space, both inside and out. 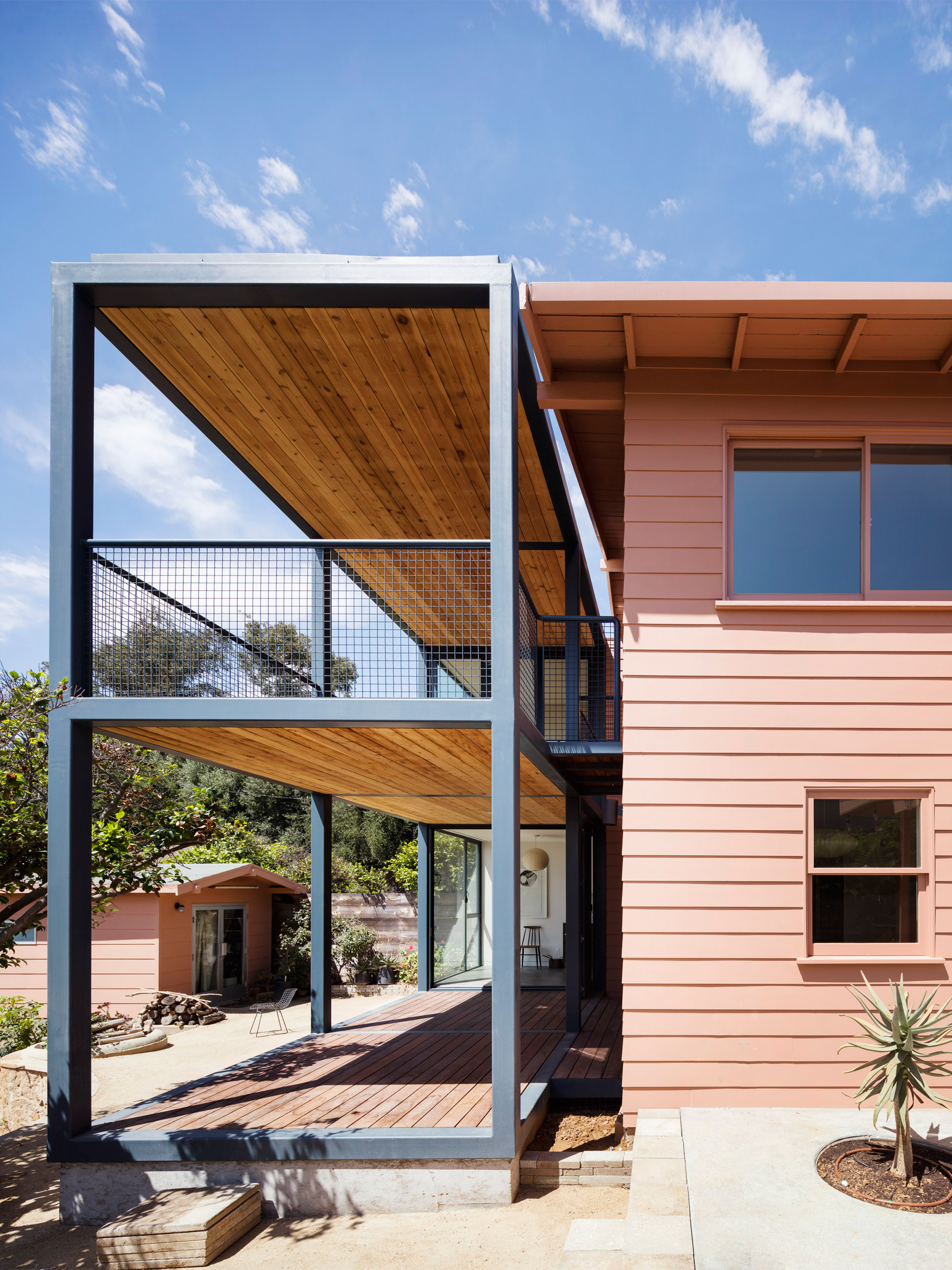 “Although the existing building was an anonymous and generic tract home, we decided to maintain as much as we could its original character since we considered the typology interesting in relation to the site’s context and history,” said the studio. 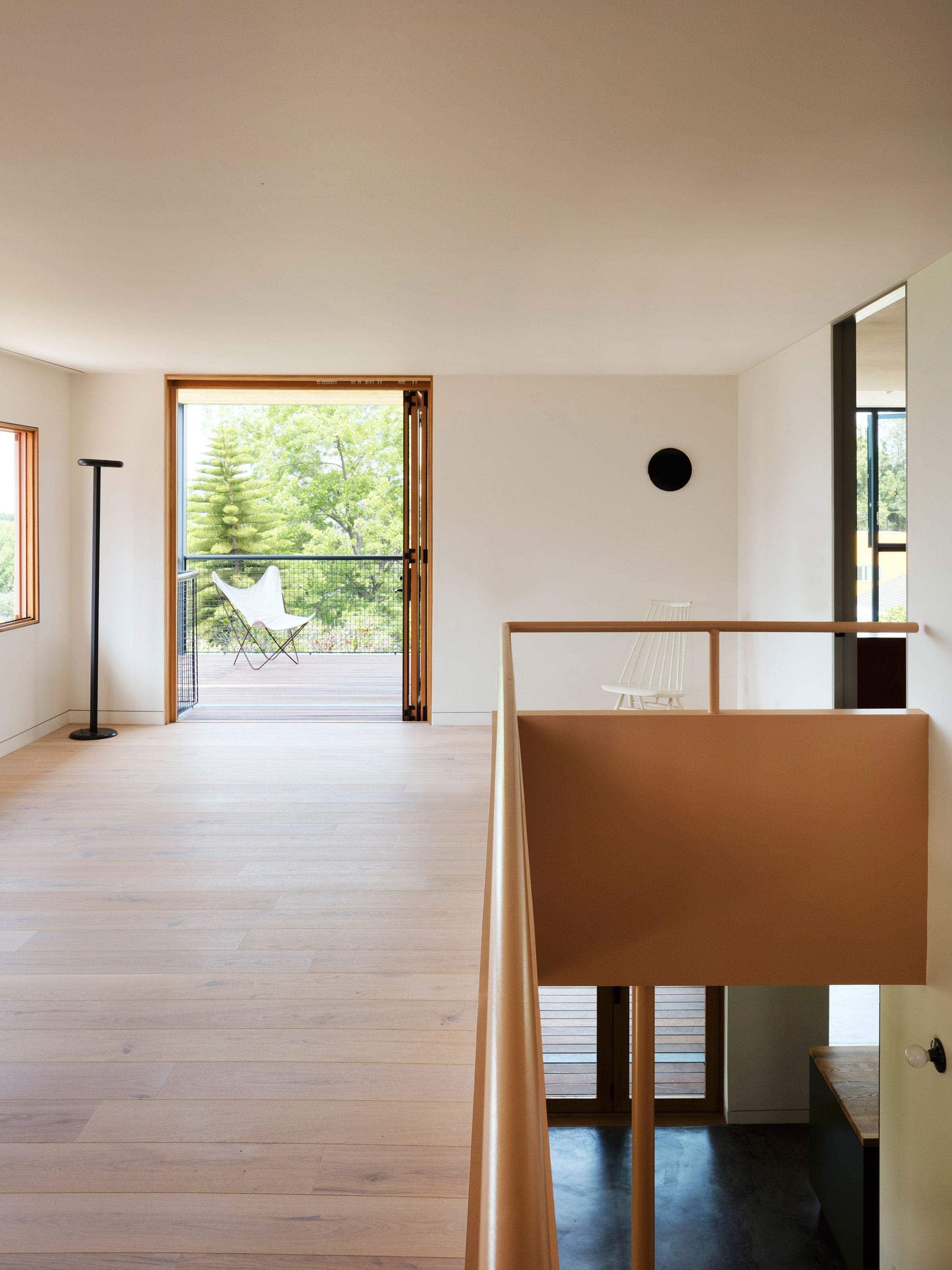 Juxtaposition was a key aim of the design, for both construction and colour palette.

The street-facing, retro bungalow in painted a soft pink and contrasts with the contemporary, dark steel structure in the rear. 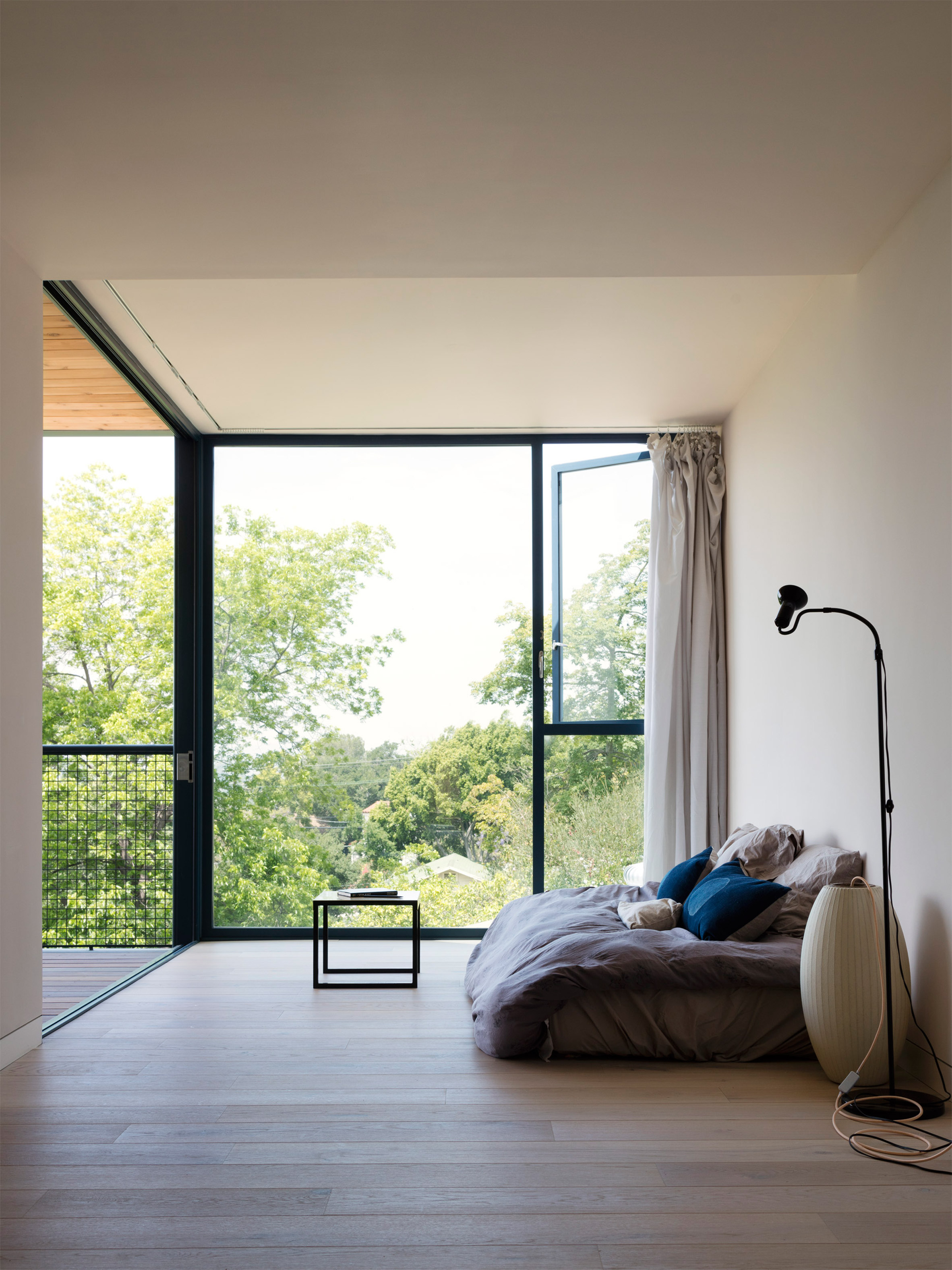 “The new grid-like structure (painted in blue) and the existing bungalow (with siding and window framing rendered in a brown-pinkish taint) establish a strong contrast,” said the firm. “They juxtapose two different moments in time: each one with its own constructive logic, material and colour code.” 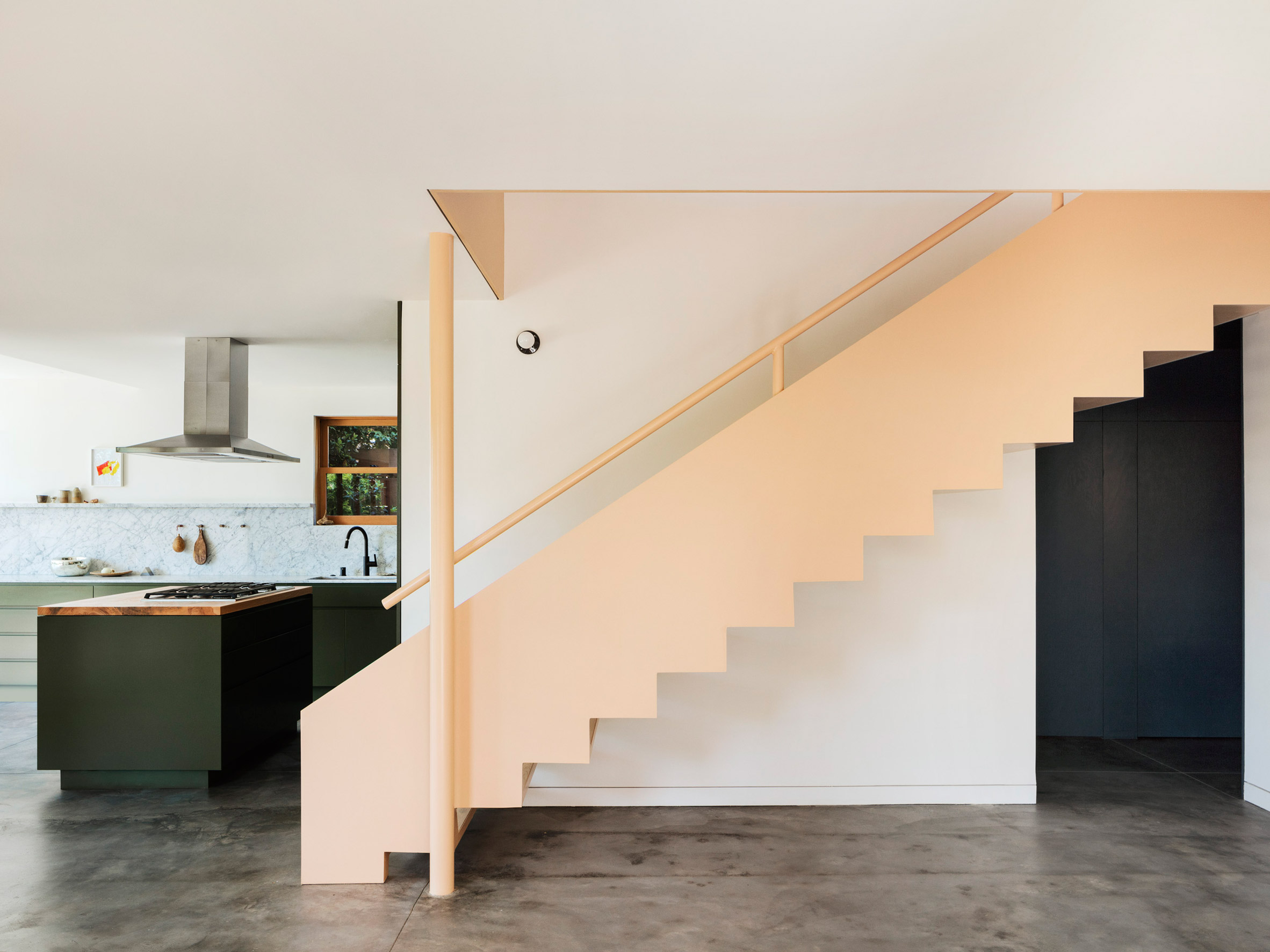 Accessed from the street along a series of steps, the entrance opens into a large foyer with an attached master ensuite.

A central staircase with a saw-tooth under-section and soft peach colour was added, allowing for the original structure to be completely redesigned and expanded. 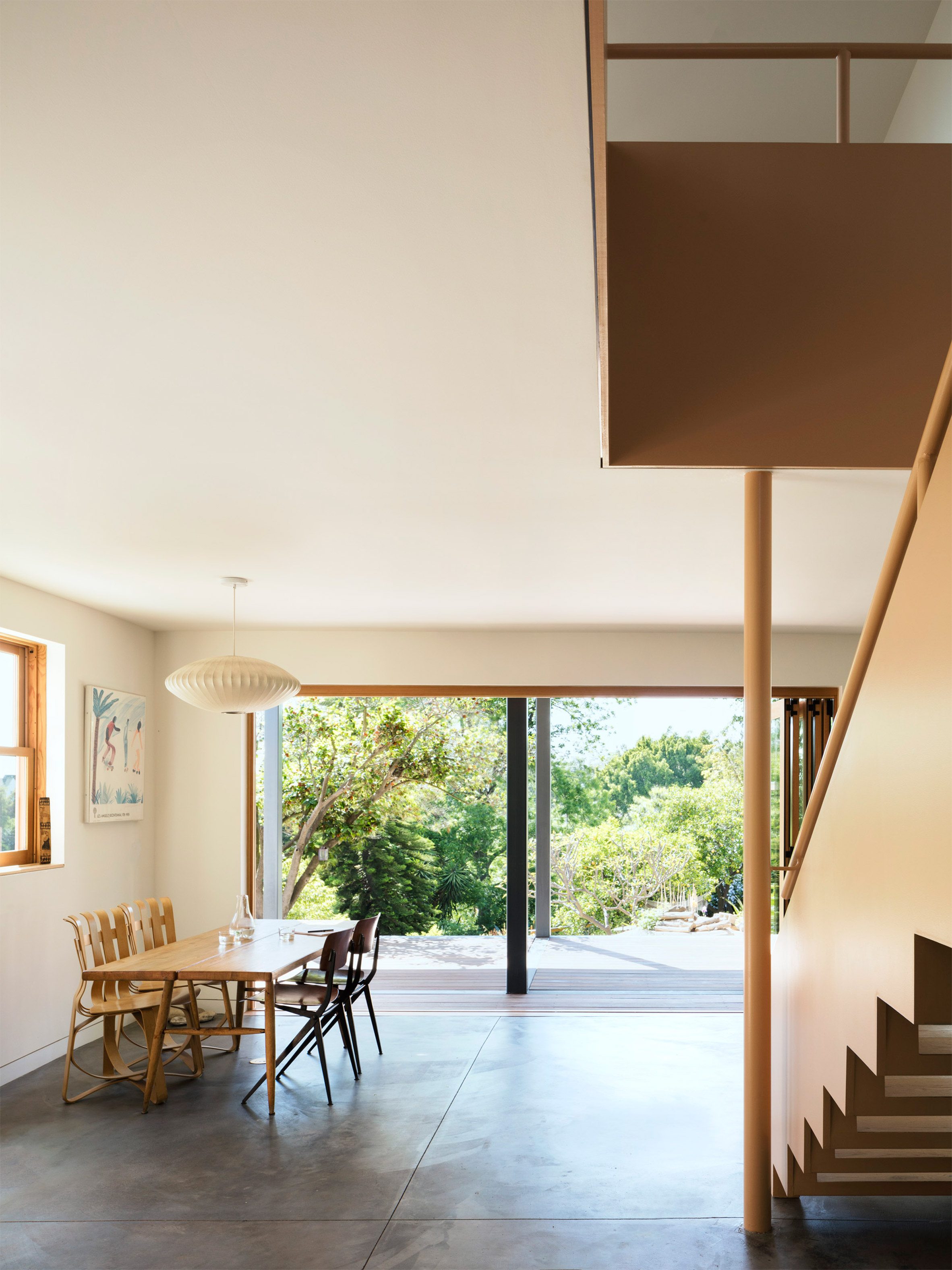 The stairs lead down to a main living area on the garden level, which contains a dining room, small sitting area, and kitchen with military-green cabinetry.

An office, bedroom, and bathroom are also on the lower level. Large, glass doors on open onto a decked patio, with floor-to-ceiling windows on the other side. 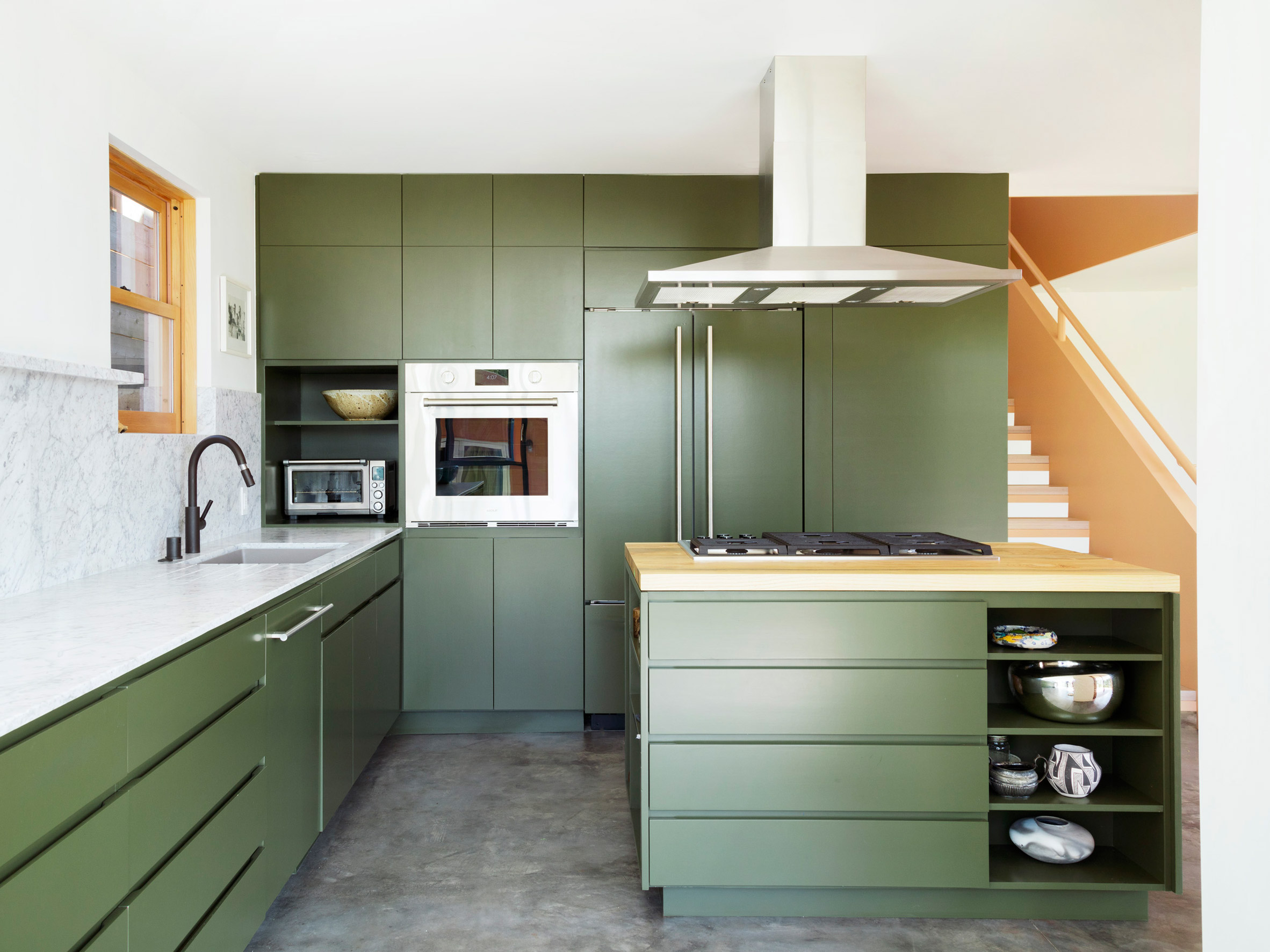 Walls are kept white, with either lightly stained wood or poured concrete used for the floors.

Inside, windows along the steel frame are encased in black metal, with other smaller windows sills are painted a creamy colour to match the staircase and bathroom cabinets. 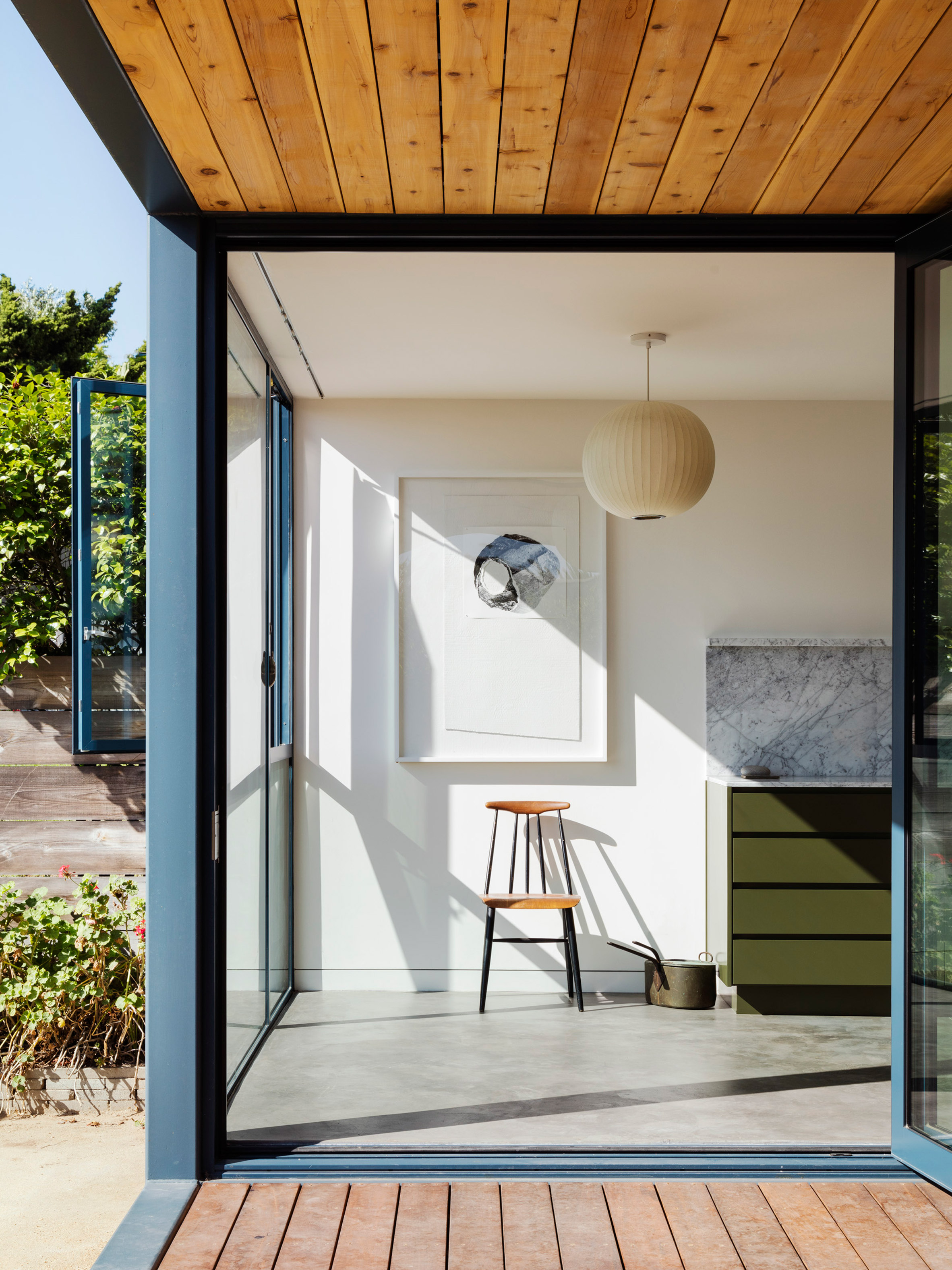 On the steel addition, four of the six gridded units create covered terraces. The two other portions are half-glazed cubes that form interior spaces, the kitchen on the lower level and the master suite above. 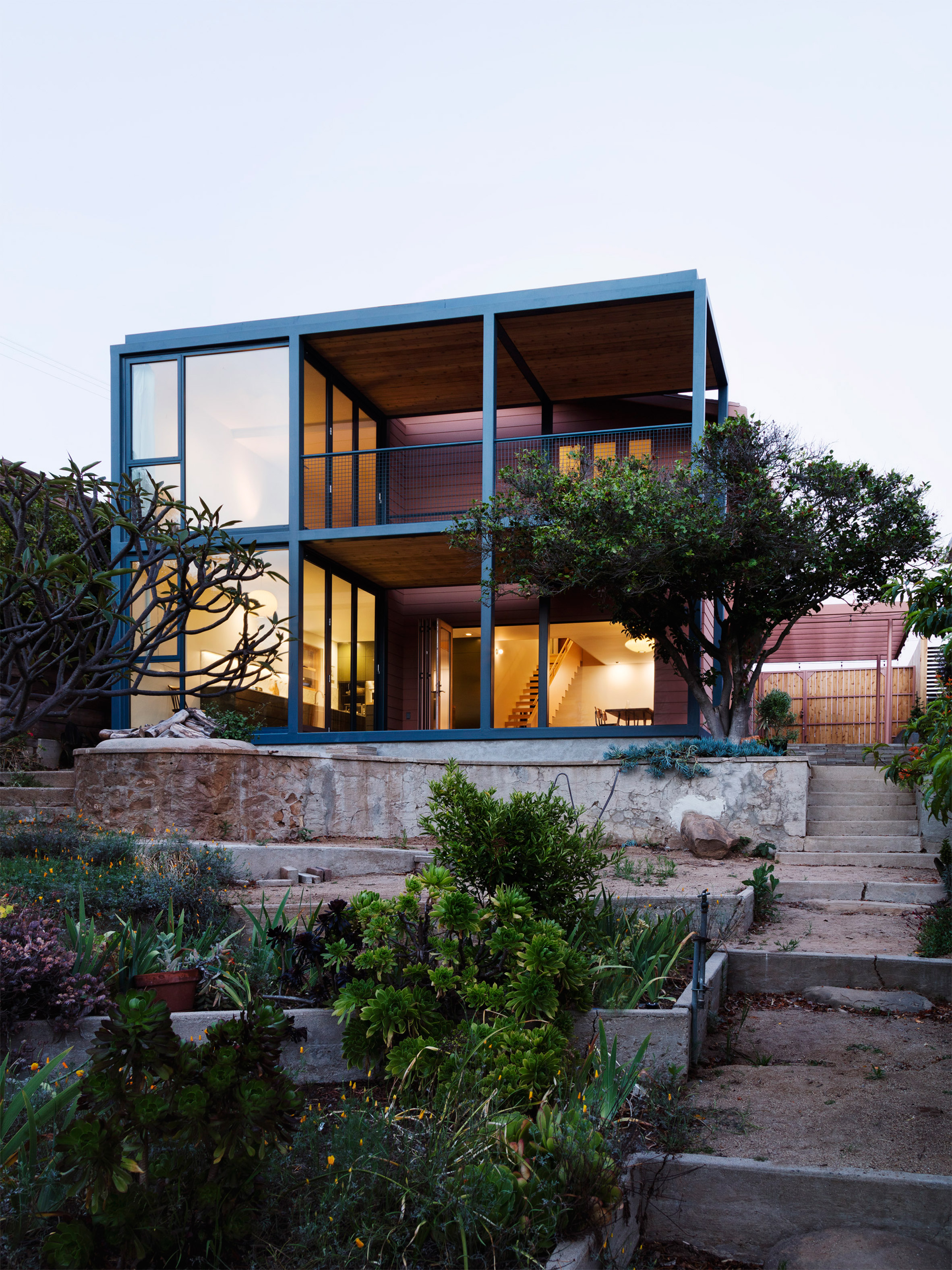 Productora is a firm led by Abel Perles, Carlos Bedoya, Víctor Jaime and Wonne Ickx, which is based in Mexico City. The studio took part in the Exhibit Columbus festival earlier this year, for which they designed circular seats that fitted around existing architectural elements in the Midwestern city. 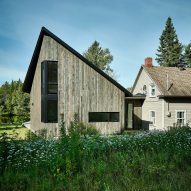