PUP Architects has installed a “subversive” duct-shaped pavilion on the roof of a canal-side warehouse in east London, to provoke local planning authorities to reconsider the area’s development.

The London studio run by Theo Molloy, Chloe Leen and Steve Wilkinson drew up the design for the Architecture Foundation‘s new Antepavilion programme, an annual commission sponsored by the property developer Shiva. 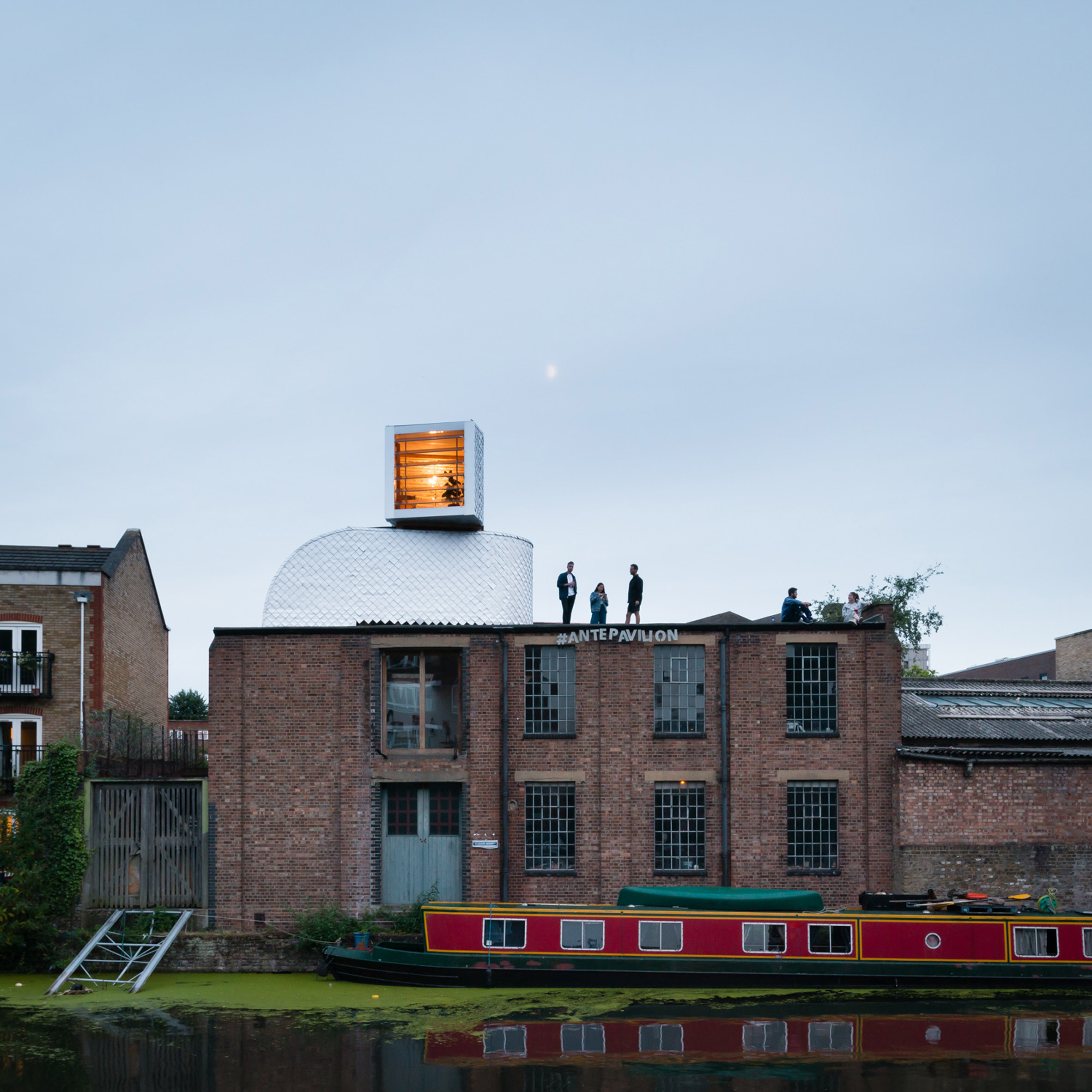 The structure joins a collection of other pavilions commissioned by Shiva in recent years for the roof of its Columbia Wharf studios.

These buildings have all been designed as prototypes for alternative ways to live in the city. They aim to challenge decisions by the local planning department to allow a spate of luxury housing blocks to be built along Regent’s Canal – while other types of projects are very difficult to win approval for.

For instance, Shiva was denied planning permission to build a simple “beach house” on the roof back in 2016 – although it went ahead and built it anyway. 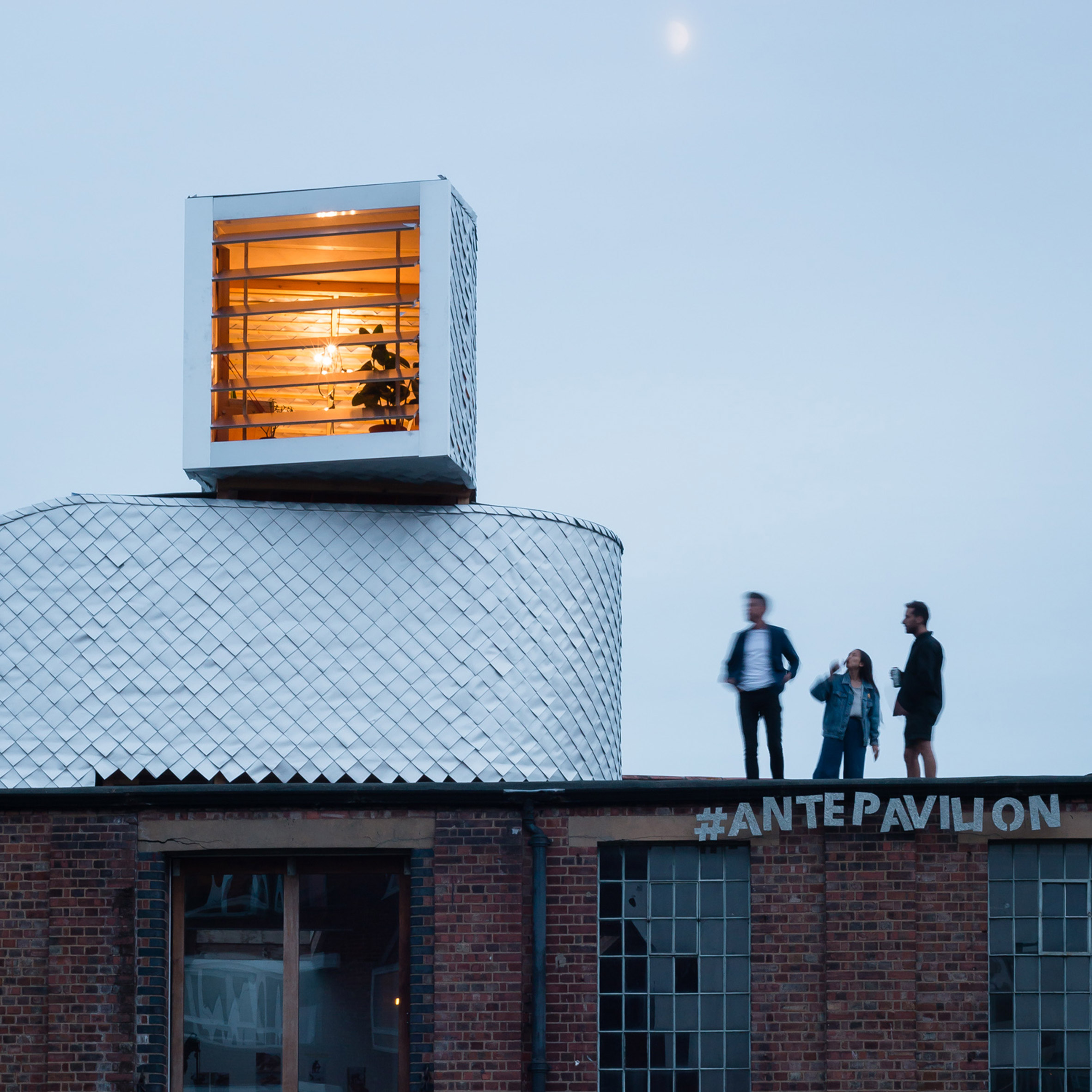 PUP Architects decided to model the pavilion on a duct after finding a loop-hole in local planning laws that allowed for a two-storey service structure to be affixed to the top of the roof.

“We wanted to provoke a conversation about why, if you can build this type of strange plant equipment on the rooftop, why can we not use it in a more positive way, to inhabit and liberate all these hundreds of thousands of square metres of rooftop space?” the architects explained during a press preview of the pavilion. 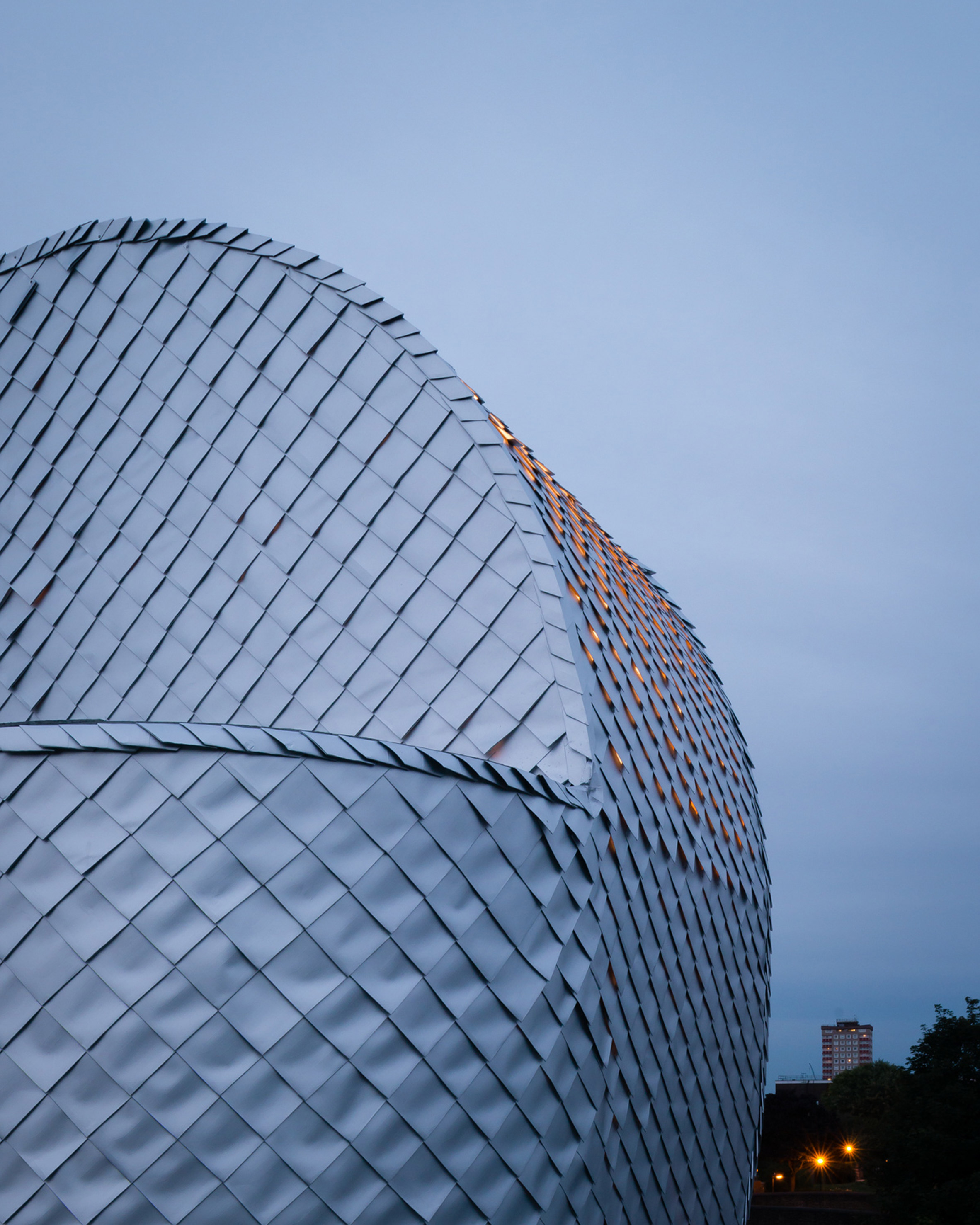 “It’s a sort of hypocrisy that rooftop plants or things which support buildings that end up on or around them are not subject to the same stringent scrutiny of design – even if it’s a huge ugly thing, it’s seen as a practical thing, you can just put it there, no one cares,” they continued. “But to say, I’d love to build a little fun summer house on my roof, you’re not allowed to do that.”

“The project is meant to provoke conversation around these issues. For that reason it will be interesting if Hackney [council] come back to us and try to challenge the idea because, what is it? Is it inhabitable, is it servicing the building?” 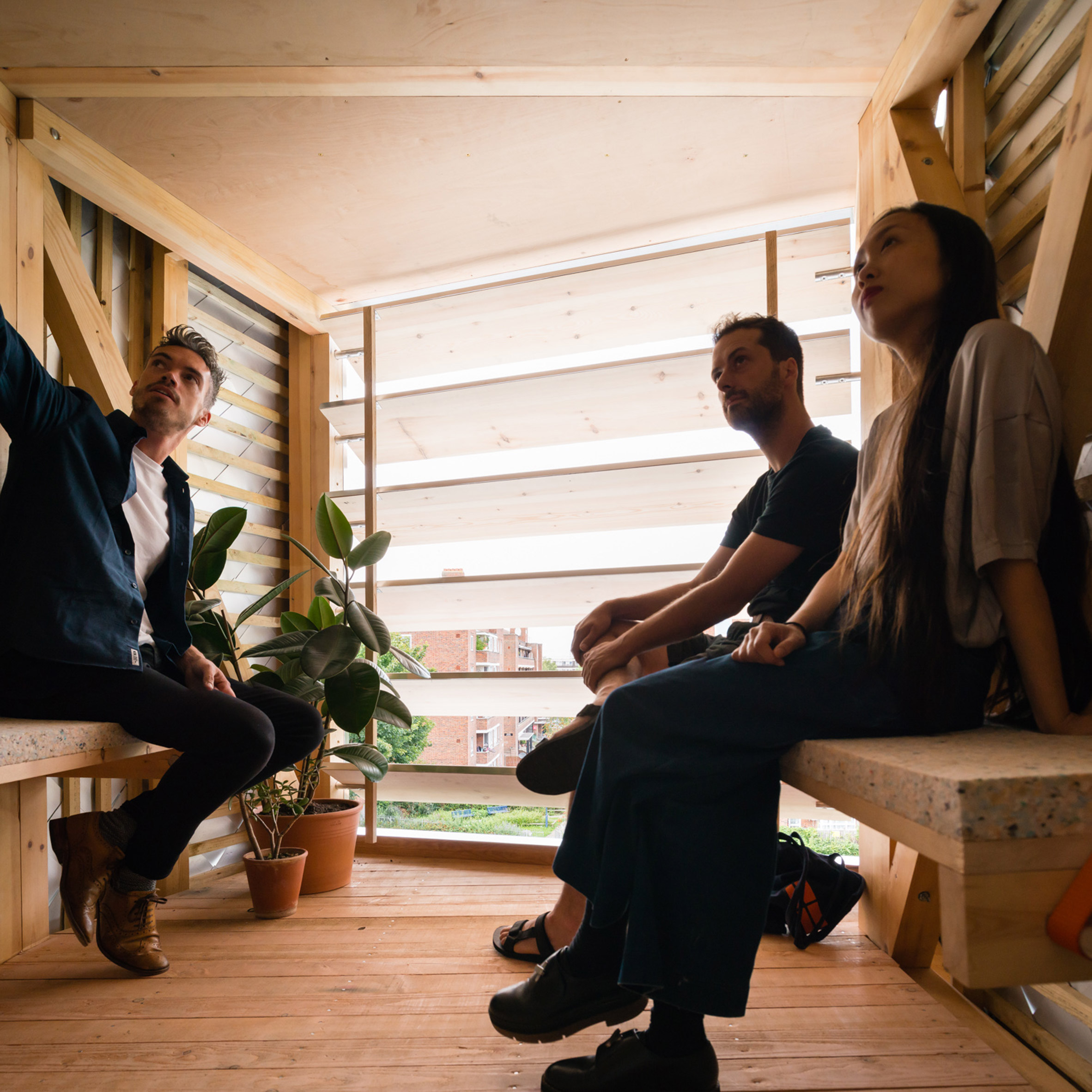 “[Shiva] is quite provocative, they’re opposite a building – the 19th-century Haggerston Baths – which is now out of use and has fallen into disrepair, and I think their mindset is that perhaps council attention could be better used on that than challenging these prototype buildings on the rooftop.” 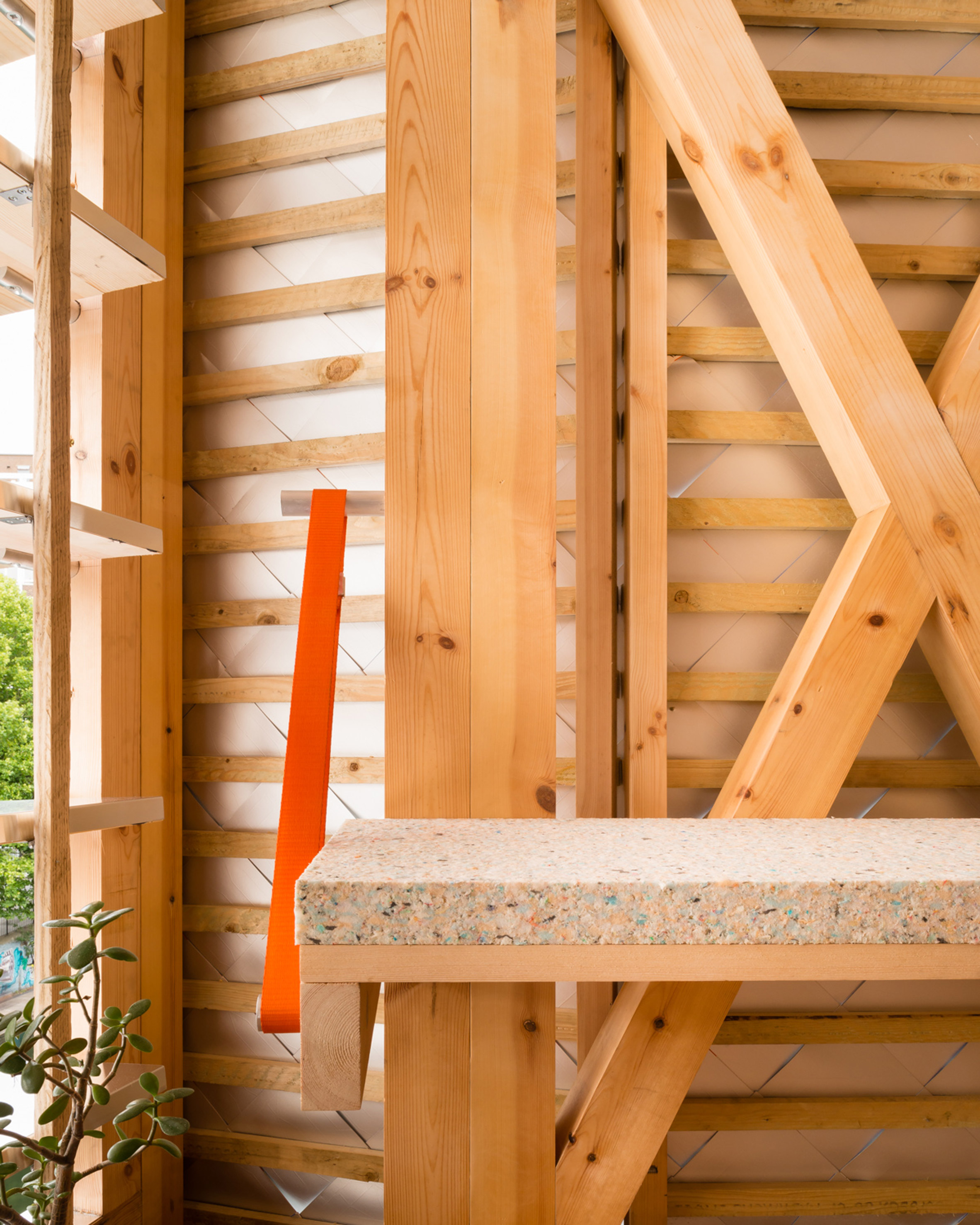 The timber-framed pavilion is covered in a skin of silvery shingles made from recycled Tetra Pak, a material more typically used for drinks cartons.

Molloy discovered the laminated paper, metal and plastic material could be used as a rainscreen while leading a student building project at a Latvian brewery. 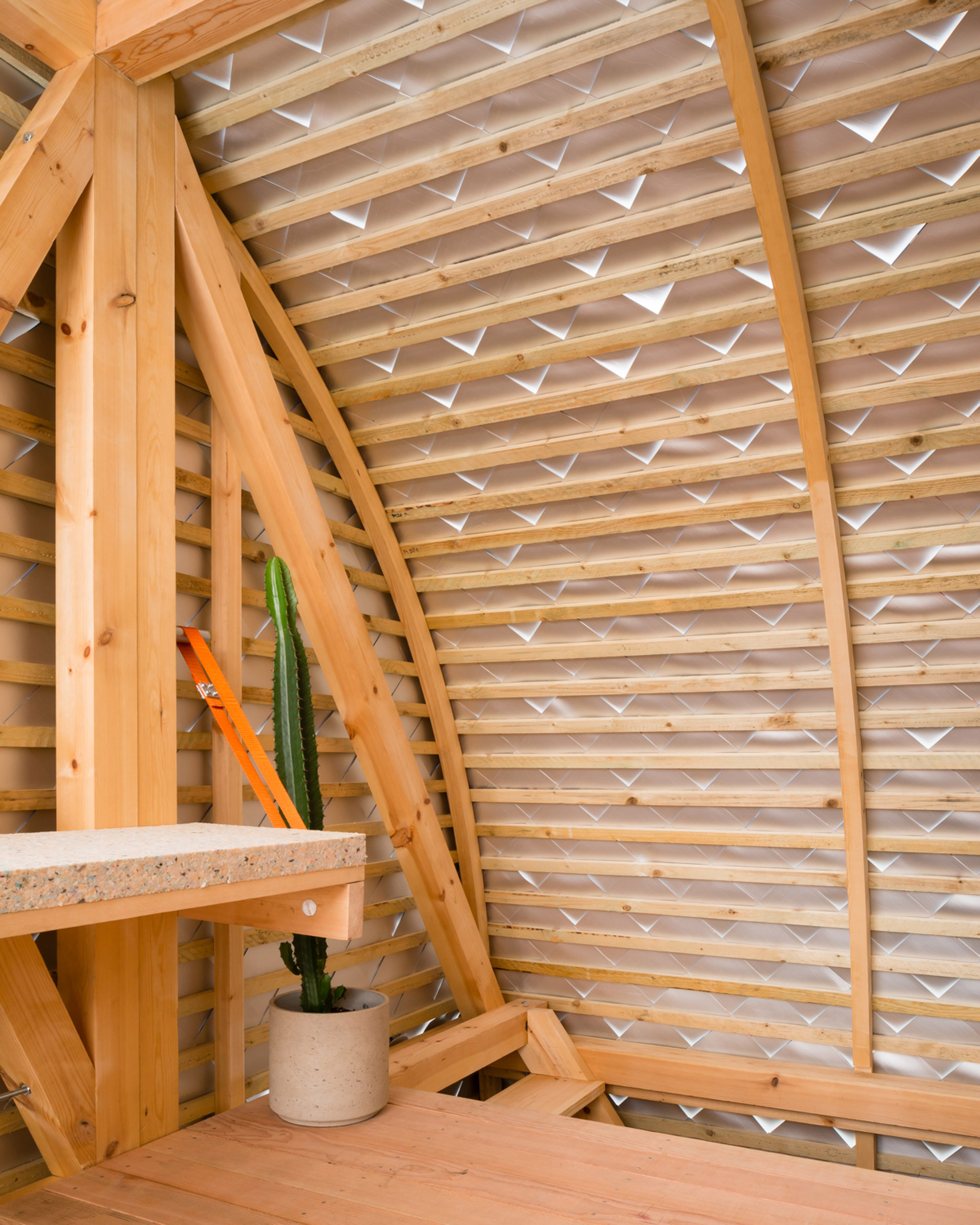 Pieces of the Tetra Pak material are folded into squares to conceal raw edges and overlapped like scales to cover the outer walls.

The lower corner of each shingle is left loose, allowing the breeze and natural light into the pavilion. The inner walls may later be insulated and a kitchenette installed to make the space habitable for longer periods of time. 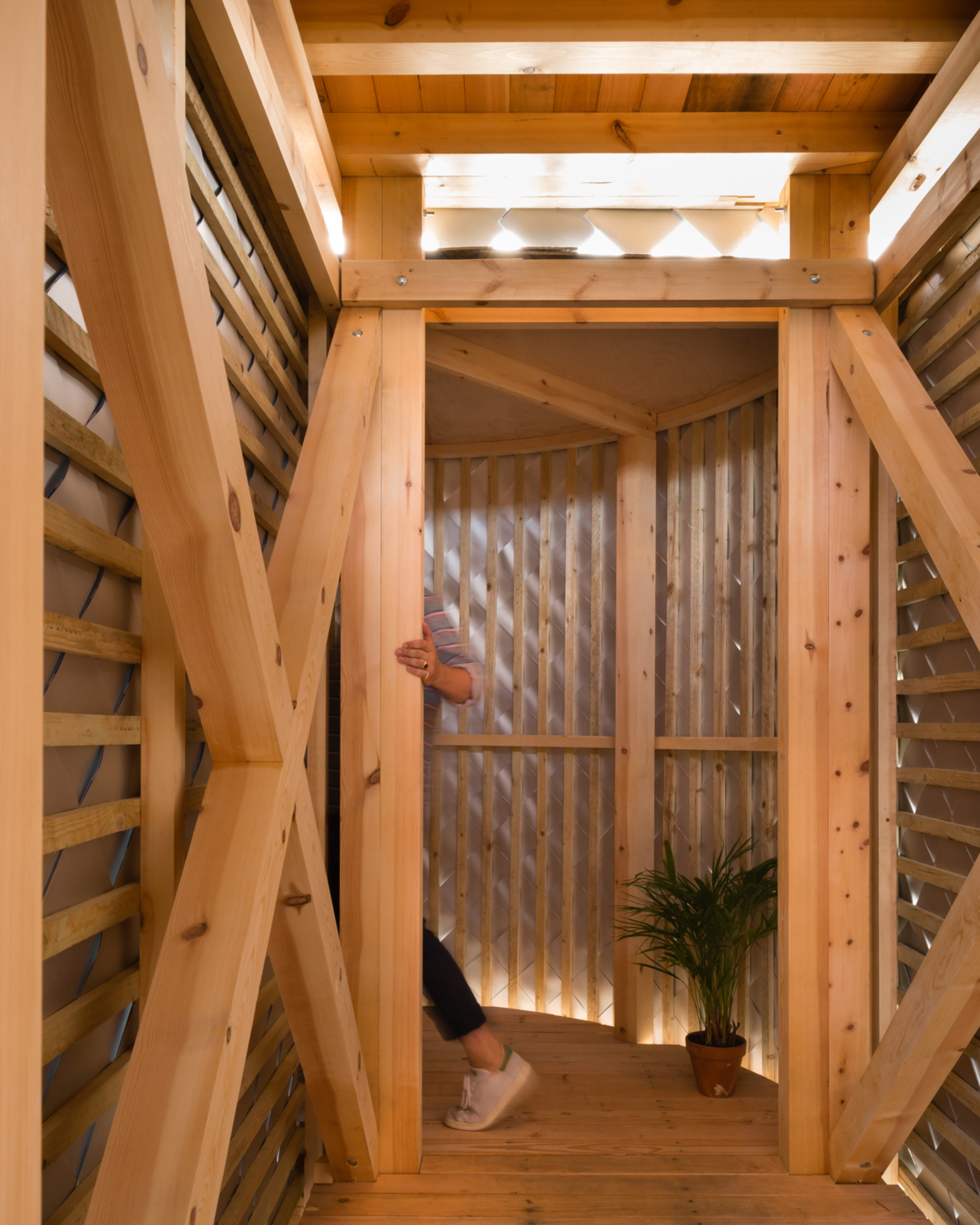 A hung staircase leads up a second-floor artist’s studio through a snaking corridor to a viewpoint at the top of the pavilion, where “jumbo proportioned” louvres open to allow visitors to take in views of the canal and the apartment blocks that are replacing smaller houses and pubs along its banks. 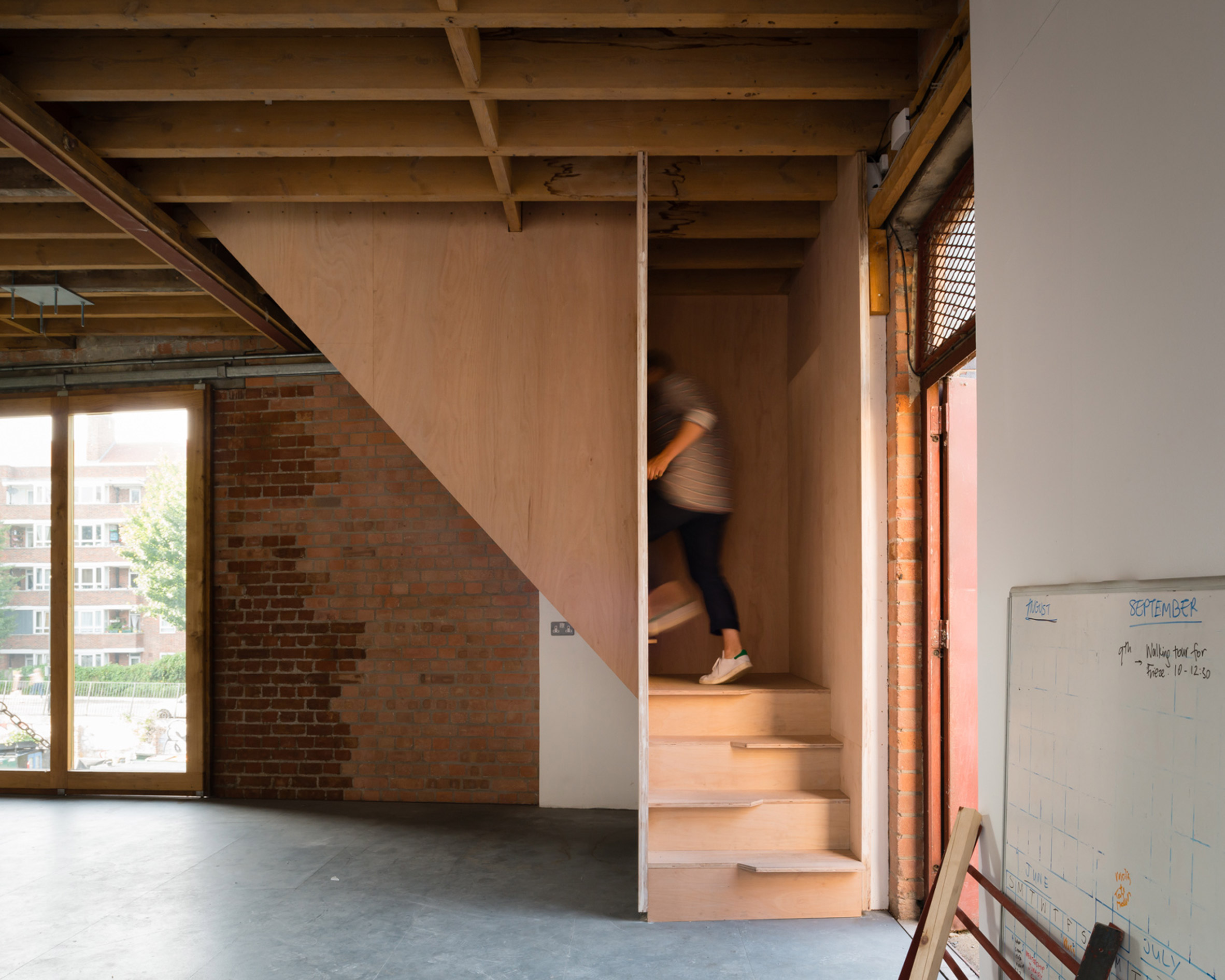 “Although it was a practical aspect to enter from below, it really added to our concept of the structure being something a little bit subverting what a roof duct is, and this idea of covertness and secrecy,” said the architects.

“It means that you can use it without ever going on the roof, which is obviously not made to be accessible.” 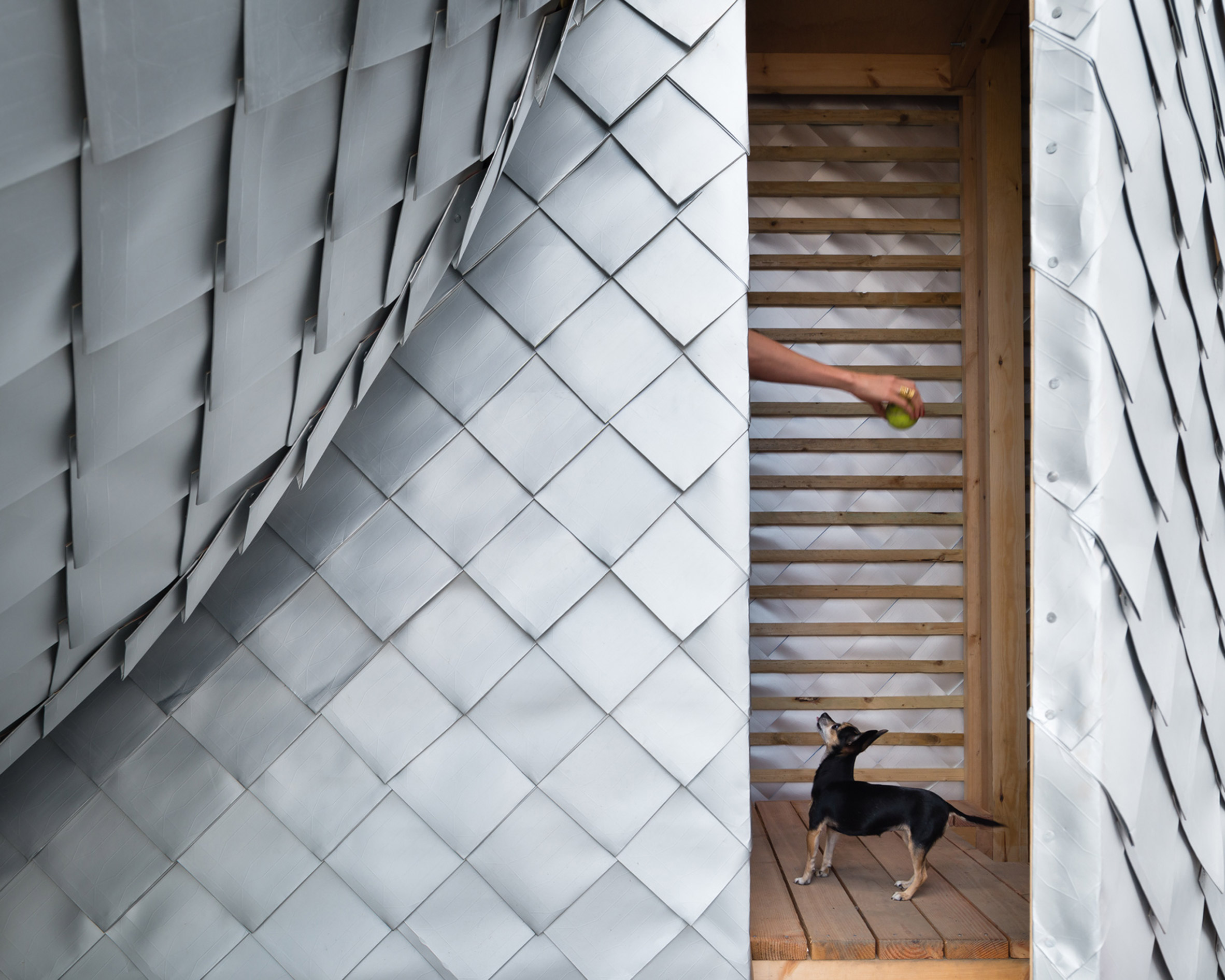 “It’s provoking local authorities in general about how open-minded they are to good ideas,” the Architecture Foundations’s deputy director Phineas Harper told Dezeen.

“It’s a legal project, but it’s pointing out all these problems with the planning system in a hopefully quite a fun and friendly way. But you can’t get away from those problems.” 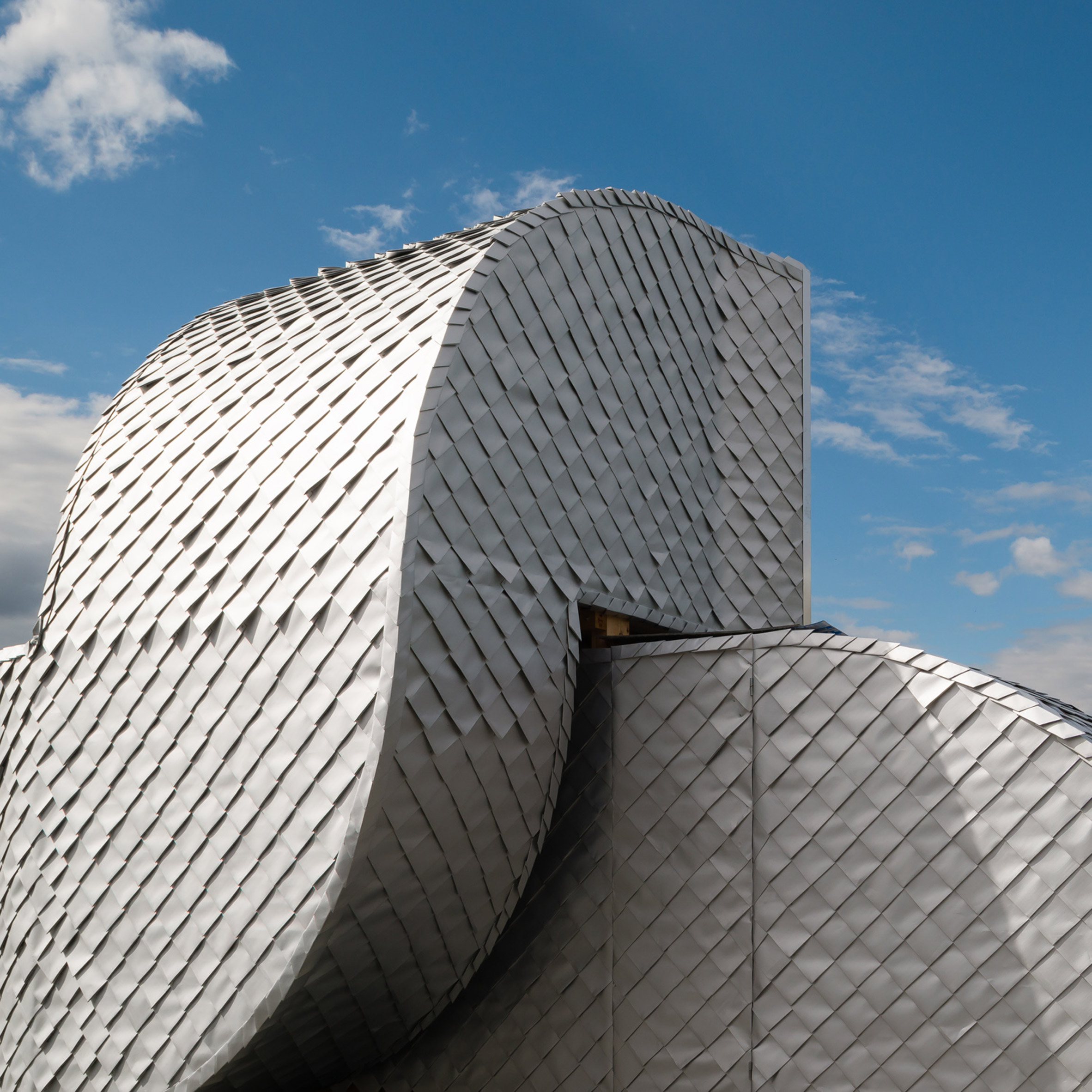 “We thought if you’re going to build a pavilion you might as well give it a political slant. Hopefully another impact of the Antepavilion project will be that other pavilion projects will start to take on a bit of a platitude,” he added.

“The Serpentine Pavilion programme has been an amazing programme for a long time but it does feel like it’s run its course or run out of a steam a little bit, and people are looking for something a bit more vigorous in its political outlook.” 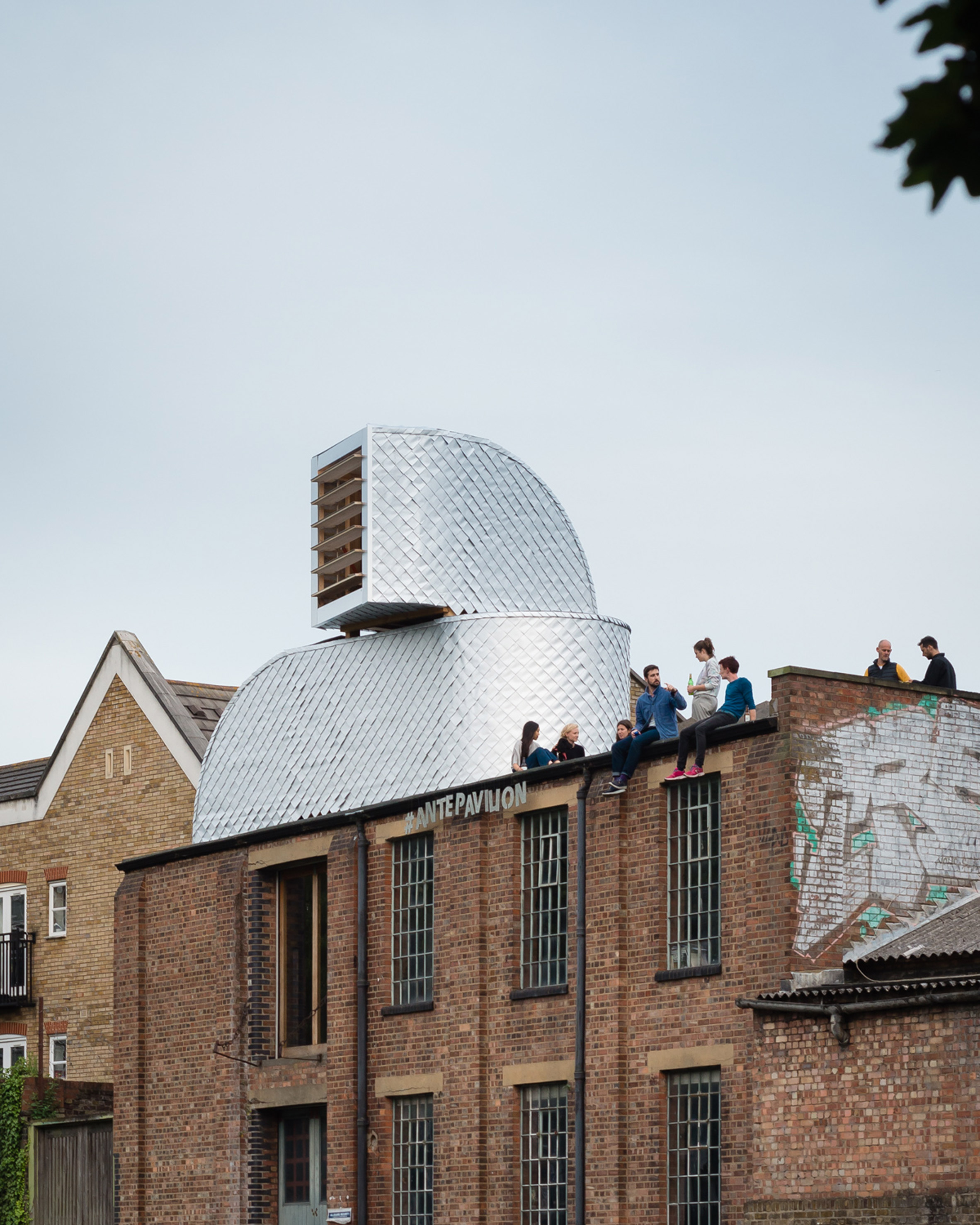 Antepavilion is open to the public at 55 Hoxton Docks on 6-7 August and again on 16-17 September during Open House London.

London-based think-tank The Architecture Foundation and Shiva plan to continue the Antepavilion Commission annually, to give emerging architects, artists and designers the chance to create further experimental rooftop structures.

Photography is by Jim Stephenson. Drone footage is by Tapio Snellman.