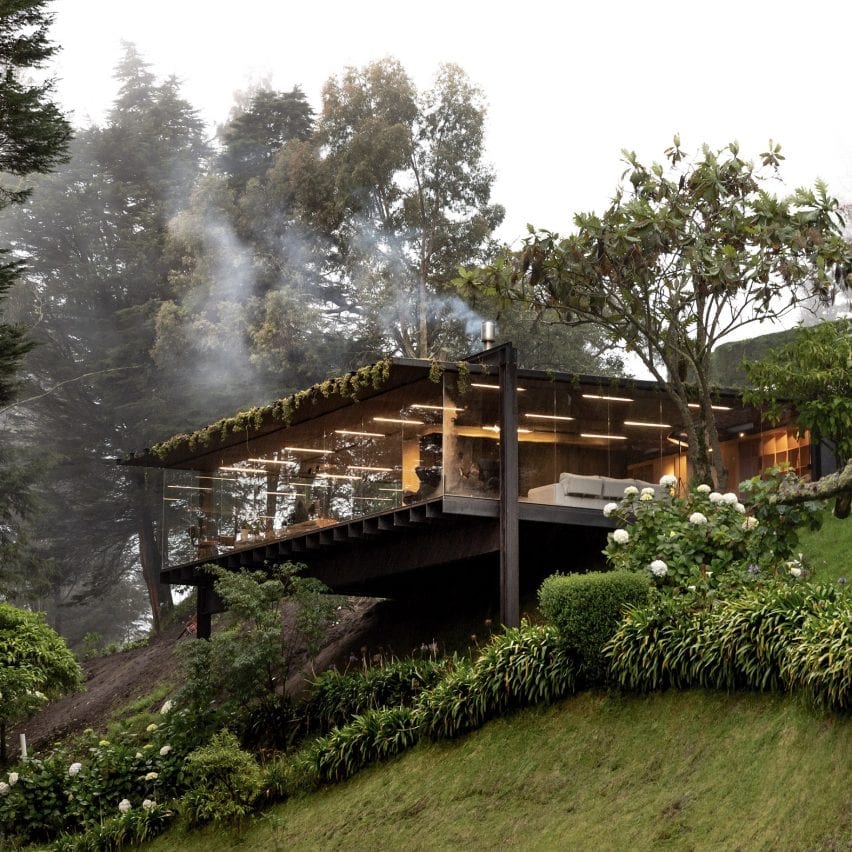 Architecture firm Rama Estudio has enlarged a small holiday home in an Ecuadorian forest by adding a glass-and-metal box that extends over the hillside.

Rama Estudio extended Casa Mirador for a family that wanted to spend more time in their holiday home following the coronavirus pandemic.

Located in a rural part of Pichincha, a province in the north-central region of Ecuador, the family used the 70-square-metre holiday home for short and sporadic periods of time.

The building contained a bedroom and bathroom, along with a multipurpose space where the family’s two daughters would sleep.

During the coronavirus pandemic, the owners decided to enlarge the dwelling so they could reside there for longer stretches.

“The specific request was to expand their existing house for social areas, include comfortable and independent bedrooms for the daughters, and take advantage of the view of the site,” said Rama Estudio, a firm based in Ecuador’s capital, Quito.

“As a special requirement, the work had to start immediately and had to be built in no more than three months.”

The original home sits on a lush site, at the edge of a hillside overlooking a valley.

For the extension, the firm conceived a single-storey, glazed box that is lifted above the sloped terrain and is supported by a system of metal channels. The roof is covered with greenery.

“We thought about an industrially prefabricated piece that blends well with the environment and subtly sits on the ground, attaching itself to the existing construction,” the studio said.

By elevating the addition, the team aimed to minimise disturbance to the soil and vegetation.

Moreover, all of the metal components were prefabricated and then assembled on-site, which reduced the construction time. The project was completed within the three-month timeline.

The addition’s exterior walls are made of tempered glass.

An underfloor heating system keeps indoor temperatures comfortable without sacrificing the transparency of the facades.

Inside, the 120-square-metre addition contains a kitchen, dining area and living room.

All of the fixed furniture was prefabricated. At the heart of the expansion is a multifunctional unit made of plywood and metal.

On the kitchen side, it holds appliances and cabinetry. On the living room side, it houses a fireplace and storage space, including a spot for firewood. There also is room for a television.

“This central piece of furniture allows for fluid and continuous circulation throughout the space, and for all the installations to be centralized inside this piece,” said the studio.

The addition is adjoined to the existing house via a new wall composed of plywood modules, which form shelving and cubbies.

The team also made modifications to the original dwelling. Walls were removed to allow the space to be reconfigured, and select windows were enlarged.

The space now holds a master suite and a pair of bedrooms for the daughters. For the kids’ rooms, the team designed a piece of furniture that houses a desk, Murphy bed and storage space.

The home has a septic tank for wastewater, allowing it to operate without being tied into a sewage system. Stormwater management tactics help ensure rainwater is channelled to the landscape.

Other projects in Ecuador by Rama Estudio include an apartment building in Ambato lined with wooden louvres, and a rural house that consists of two stone-walled volumes with grassy roofs.

Photography is by JAG Studio.