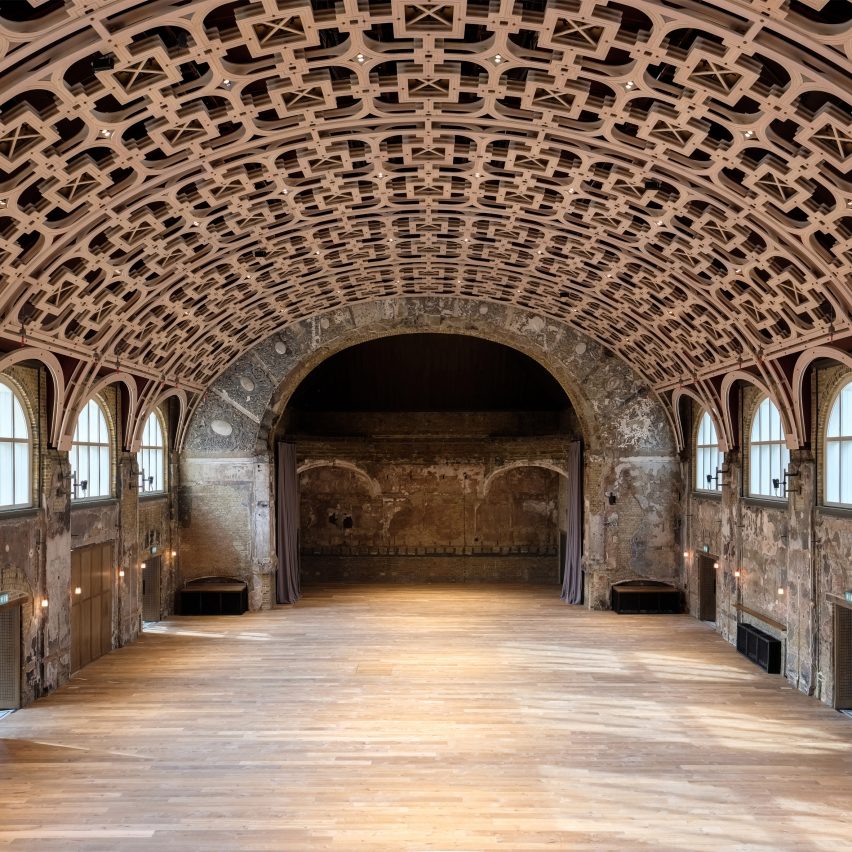 The first instalment of Dezeen and Knauf’s Architecture Project Talks takes place on Friday 14 May and will focus on Haworth Tompkins‘ renovation of Battersea Arts Centre. Register now to watch the webinar.

Haworth Tompkins associate Martin Lydon will deliver a presentation about the Battersea Arts Centre project, elaborating on how he worked alongside the local community and overcame the challenges of renovating a historic building.

The private webinar takes place at 1:00pm London time on Friday 14 May 2021 and attendees must register to attend.

Completed in 2018, Battersea Arts Centre is a community theatre in southwest London that was transformed by Haworth Tompkins through a series of phased alterations that took place over 12 years.

35 performance spaces, a number of artists’ bedrooms, a rooftop office and a co-working space are housed within the classical-style building, which was originally designed in 1893 by British architect E W Mountford.

The site also contains a community allotment, an outdoor theatre and a large performance space called the Grand Hall, which is renowned for its curved lattice ceiling.

The building was added to Historic England’s list of protected sites in 1970 for the key role it played in various political struggles at the beginning of the twentieth century, including the suffragette and labour movements.

Four years after its listing, the town hall became the home of Battersea Arts Centre, a performance art organisation from which the building now takes its name.

In 2006, Haworth Tompkins began working with the Battersea Arts Centre team, theatre artists and the local community to transform the building through a series of non-invasive alterations that allowed it to remain open and active throughout the process.

These phased alterations included the addition of an internal courtyard and performance space, which was created by stripping back and repurposing a disused lightwell at the centre of the building plan.

The refurbishment also included the Grand Hall, which was destroyed in a fire that took hold of Battersea Arts Centre as it was nearing completion.

The surviving structural brick shell was partially repaired using bespoke conservation techniques, while the reconstructed roof was lined with a plywood lattice that replicates the pattern of the original plaster ceiling lost in the fire.

Battersea Arts Centre has won several awards including the RIBA National Award, a Civic Trust AABC Conservation Award and Theatre Building of the Year at The Stage Awards.

The talk will be delivered by Martin Lydon, who joined Haworth Tompkins in 2005 and became an associate in 2015.

He plays a key role in a range of the studio’s heritage and existing building projects and is part of Haworth Tompkins’ Sustainability and Regenerative Design group, which explores processes that restore, renew or revitalise energy sources and materials.

In addition to working at Haworth Tompkins, Lydon has also taught undergraduate students at Manchester School of Art and is a regular guest critic and speaker at various universities, including the University of Westminster and The Bartlett.

Architecture Project Talks is a series of live CPD webinars in which leading architects deliver an in-depth lecture about one of their key buildings. Other talks in the series include lectures about Cork House by CSK Architects and 168 Upper Street by Groupwork.

Architecture Project Talks is a partnership with Knauf, the world’s largest manufacturer of gypsum-based construction materials.

The post Register for our Architecture Project Talk about Battersea Arts Centre by Haworth Tompkins appeared first on Dezeen.