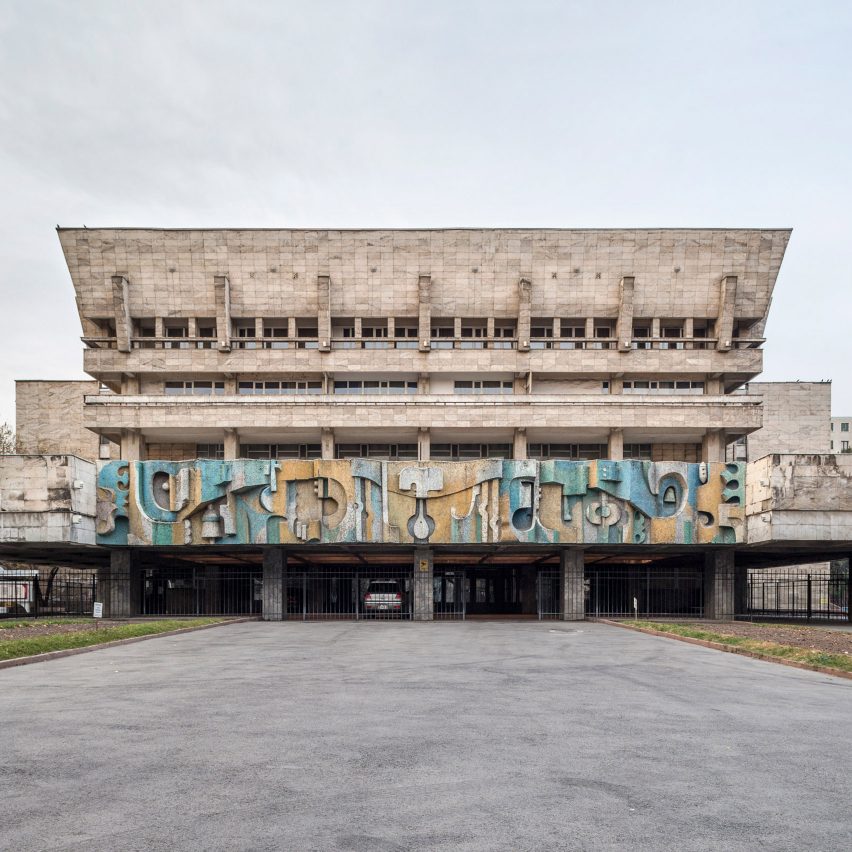 Mosaics and murals feature in this photography series of Soviet-era architecture from Central Asia by photographers Roberto Conte and Stefano Perego.

The duo’s Soviet Asia series documents architecture constructed between the 1950s and 1991 in the former Soviet republics of Kazakhstan, Kyrgyzstan, Uzbekistan and Tajikistan.

The Soviet Union, or USSR, was a Russian socialist state that governed various parts of Europe and Asia from 1922 until its fall in 1991.

Italian photographers Roberto Conte and Stefano Perego travelled to former Soviet regions in order to capture various monuments, residential buildings and other landmarks. The result is a set of photographs that show brutalist Soviet architecture with elements such as colourful mosaics and frescoes.

“In order to represent this complexity in the best way possible, we collected a big variety of architectural typologies,” Conte and Perego told Dezeen.

The photographers explained how the Soviet modernist buildings they studied present an intriguing clash of cultures.

“The architecture merges the need of the State to provide buildings consistent with the idea of a new kind of modern and socialist urban life, with local culture and traditions that were quite distant from a Moscow point of view,” Conte and Perego told Dezeen.

One image is of Chorsu Bazaar in the old town of Tashkent in Uzbekistan.

With its domed roof tiled in an ornate mosaic of curved forms, the 1980 bazaar’s motifs take cues from Persian design. Yet the concrete slabs which form its structure are typical of Eastern Bloc architecture.

Aul, a 1986 housing complex in Almaty, Kazakhstan’s largest city, wrestles with bulbous colourful shapes and brutalist influences, while the bright green Hostel Avesto in Dushanbe, Tajikistan was built in a similar style in 1984.

Formerly known as the Palace of Culture AHBK, the State Academic Russian Theatre is a public theatre for children and young people embellished with colourful abstract details, also built in Almaty.

A 1976 circus photographed in Bishkek, Kyrgyzstan’s capital city, is a particularly striking example of a combination of Soviet concrete and Eastern colour.

Bright green, yellow and salmon-pink form the strong shapes of the circus’s facade.

“It definitely shatters the misconception belonging to those who think that Soviet buildings were invariably ‘grey boxes’,” said the photographers.

An especially vivid 1988 public mosaic by architect Ilya Rakhnaev and artists Alexander Grigorov and Ilya Ilyaev was photographed by Conte and Perego in Dushanbe, Tajikistan.

Roberto Conte and Stefano Perego are collaborative Italian photographers. Conte recently photographed a series of brutalist architecture in Madrid that is not often associated with the Spanish capital.

Other designs which are influenced by Eastern Bloc architecture include offices in Belarus by Studio 11 with bold red walls, and a furniture collection by design duo Rooms which takes cues from Soviet architecture in Georgia.