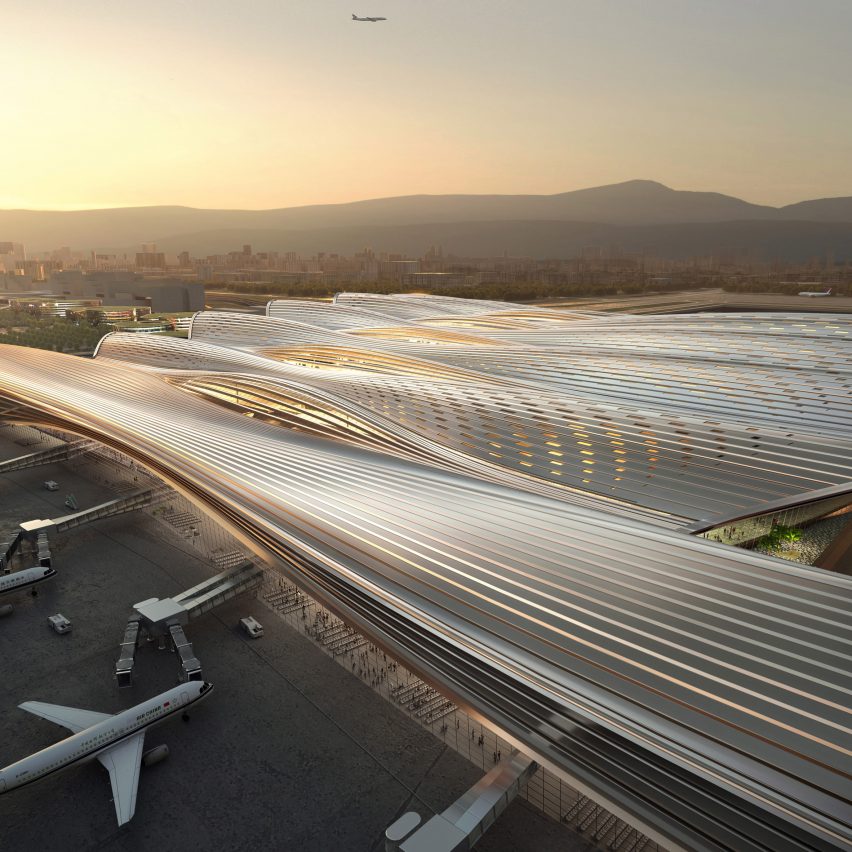 Architecture studio Rogers Stirk Harbour + Partners has designed a terminal for an airport in Shenzhen, China, that will be arranged around a large covered garden.

The 400,000 square-metre terminal will be an extension to Shenzhen Bao’an International Airport and is designed to handle 31 million visitors a year.

The building will have a streamlined form with an undulating, sweeping roof that emulates the pattern of airflow.

Airport will be built around central garden

Rogers Stirk Harbour + Partners‘ terminal will include a central 10,000-square-metre garden that was designed to act as a “front door” to the city of Shenzhen.

“The garden acts as the front door to Shenzhen connecting and integrating ground and air travel.”

According to the studio, the terminal will include vast green spaces and landscaped walkways to promote wellbeing.

“It is a building where passengers’ wellbeing and pleasure are at the heart of the design,” said Rogers Stirk Harbour + Partners senior partner Ivan Harbour.

“This is an airport that celebrates the hellos and goodbyes in a natural environment at its heart,” he continued.

“These are the emotional moments that, despite the ever-increasing speed of our daily lives, remain important to us as individuals.”

The terminal hopes to become a landmark

The terminal was developed in collaboration with China Northeast Architectural Design & Research Institute as part of an international competition.

According to the Rogers Stirk Harbour + Partners, the building will attempt to meet sustainability goals through its compact form, control of solar gain, low water use, and the harvesting of rainwater.

Grimshaw Architects have also designed a transport hub for the Shenzhen Bao’an Airport that will accommodate highspeed rail and other transport systems.

Elsewhere in Shenzhen, a music conservatory enveloped in decorative louvres designed by EMBT  along with a 700 metre-long university building designed by Dominique Perrault Architects is being built as part of a city-wide development for 10 new cultural buildings that form part of the Shenzhen Ten Cultural Facilities of New Era masterplan.