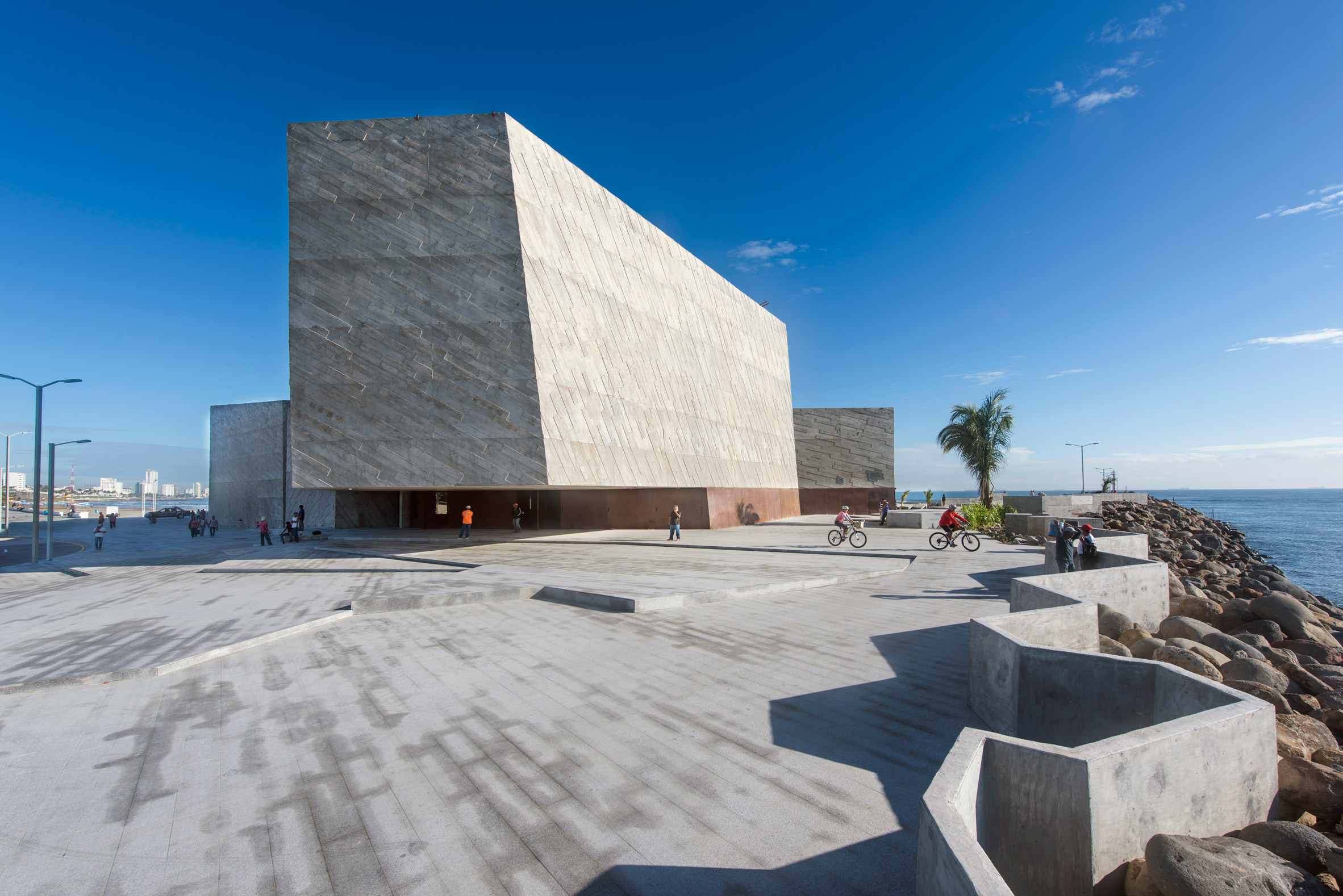 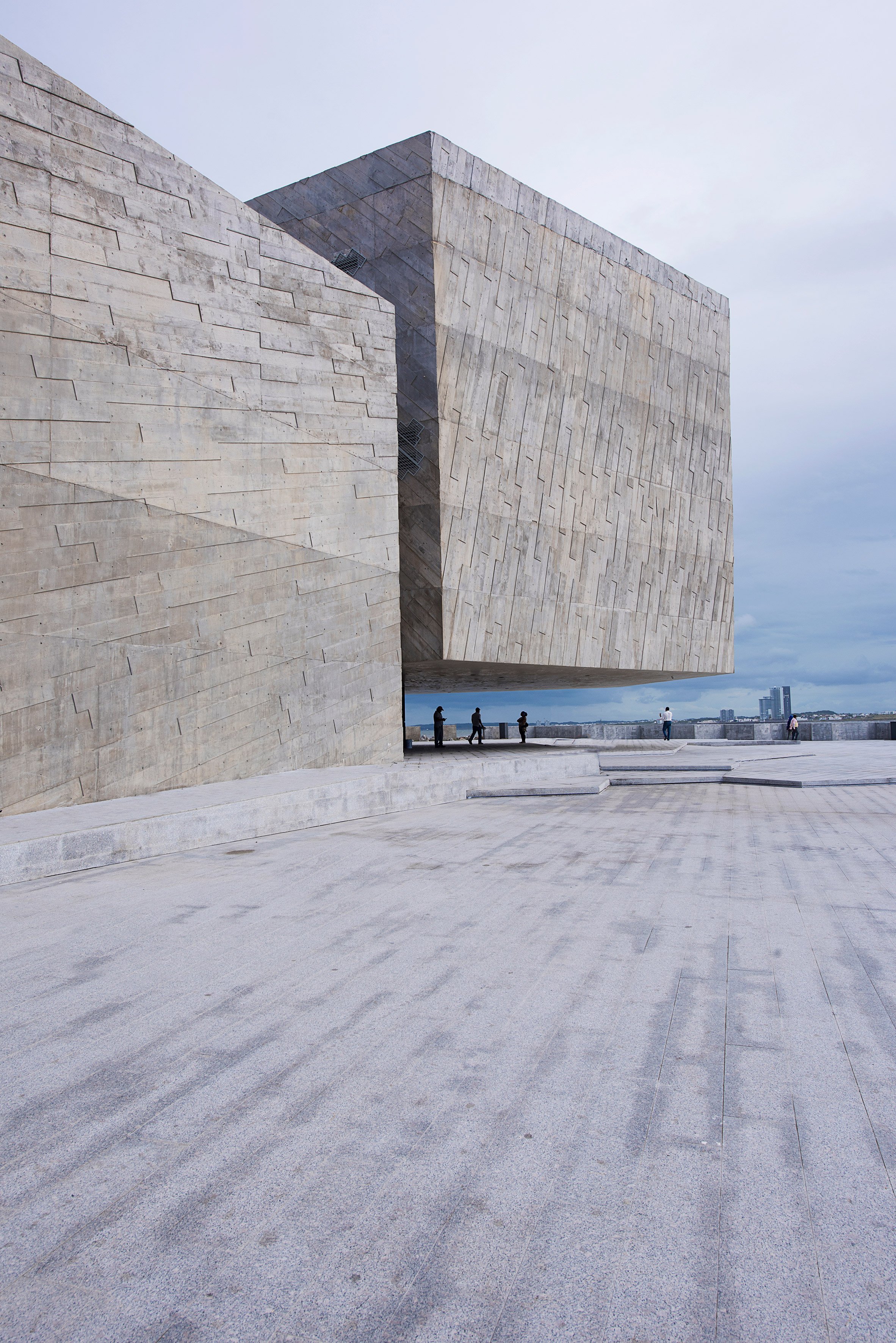 Built as part of a wider masterplan to rejuvenate the area, the concert hall occupies a parcel of land along the estuary of the Jamapa river, where a breakwater extends to split the mouth of the river and the Gulf of Mexico.

The building’s geometric shape – comprising different-sized blocks and angular walls – is intended to reference the rocky edge of this sea wall.

Jagged details also feature around the landscaped plaza around the building, leading from the curved boulevard Coastal Avenue Vicente Fox in front to the jetty at the rear. These details include the irregular shallow platforms in the concrete paving, and the angular profile of the guardrail alongside the water’s edge.

“The Foro Boca’s location is intended to articulate the dynamics of the central part of the city with the coastal avenue, and has the goal of functioning as an urban detonator capable of inciting modernity in the area,” said the firm, who unveiled their design for the building in 2015.

“The forum itself is a tool that has permitted the reconstruction and renovation of the infrastructure and urban image of this part of the city.” 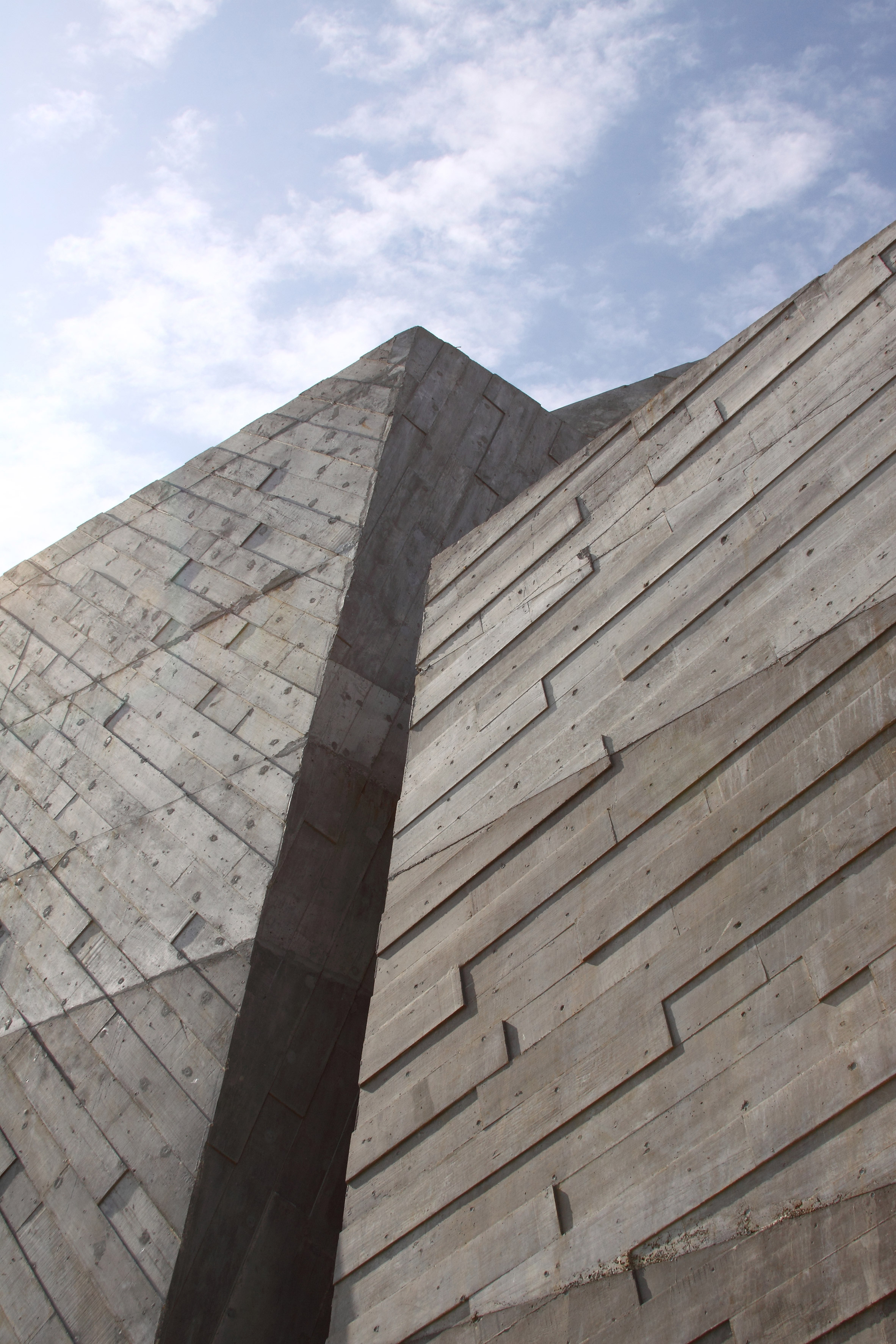 The exposed concrete walls are marked with the texture of wooden boards set in a diagonal pattern. The angles are slightly different on each wall face, creating varying hues and shadows.

One of the blocks is slightly raised above the ground to provide a canopy for the entrance. Visitors pass underneath into a triple-height lobby, where board-marked concrete is also left exposed. 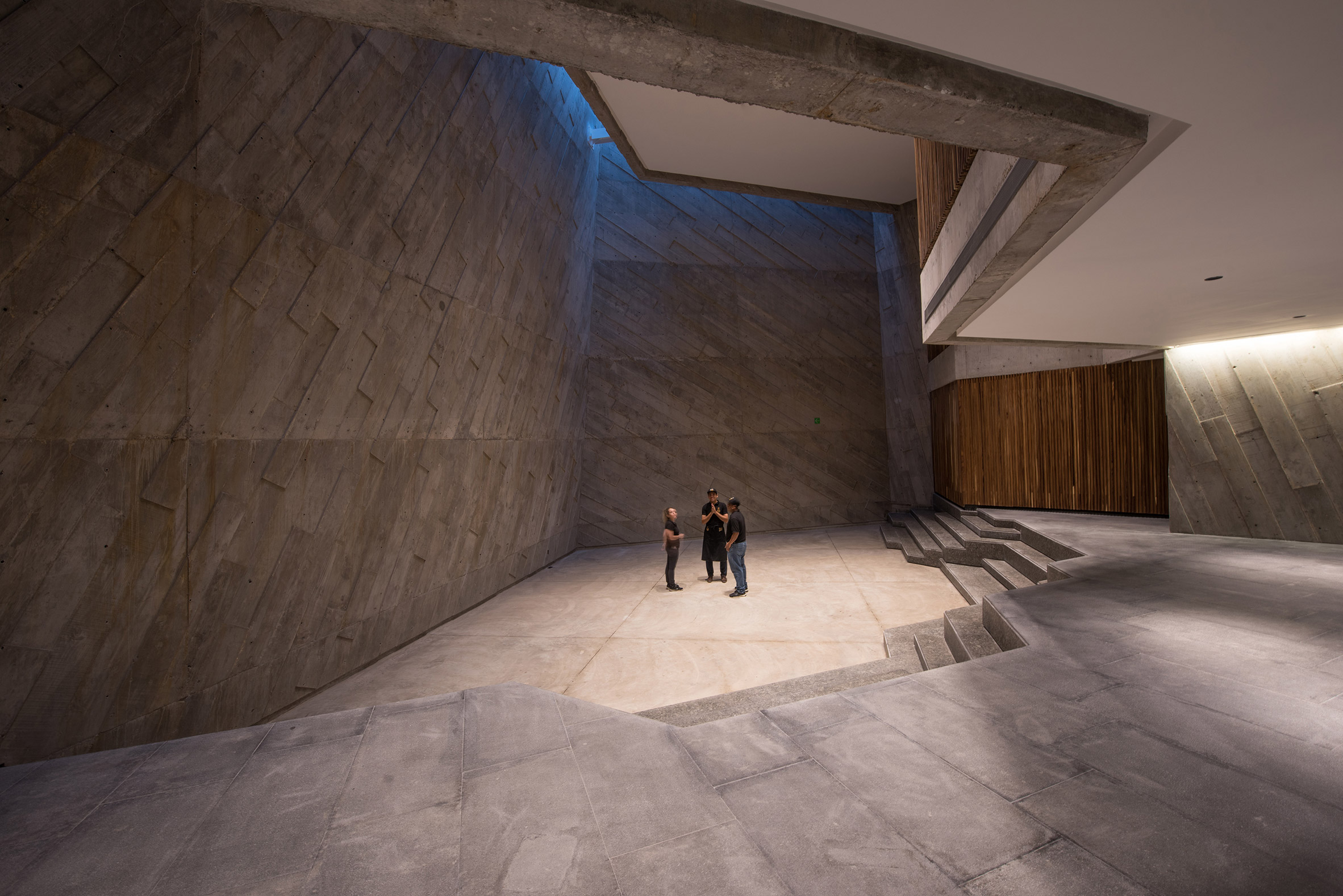 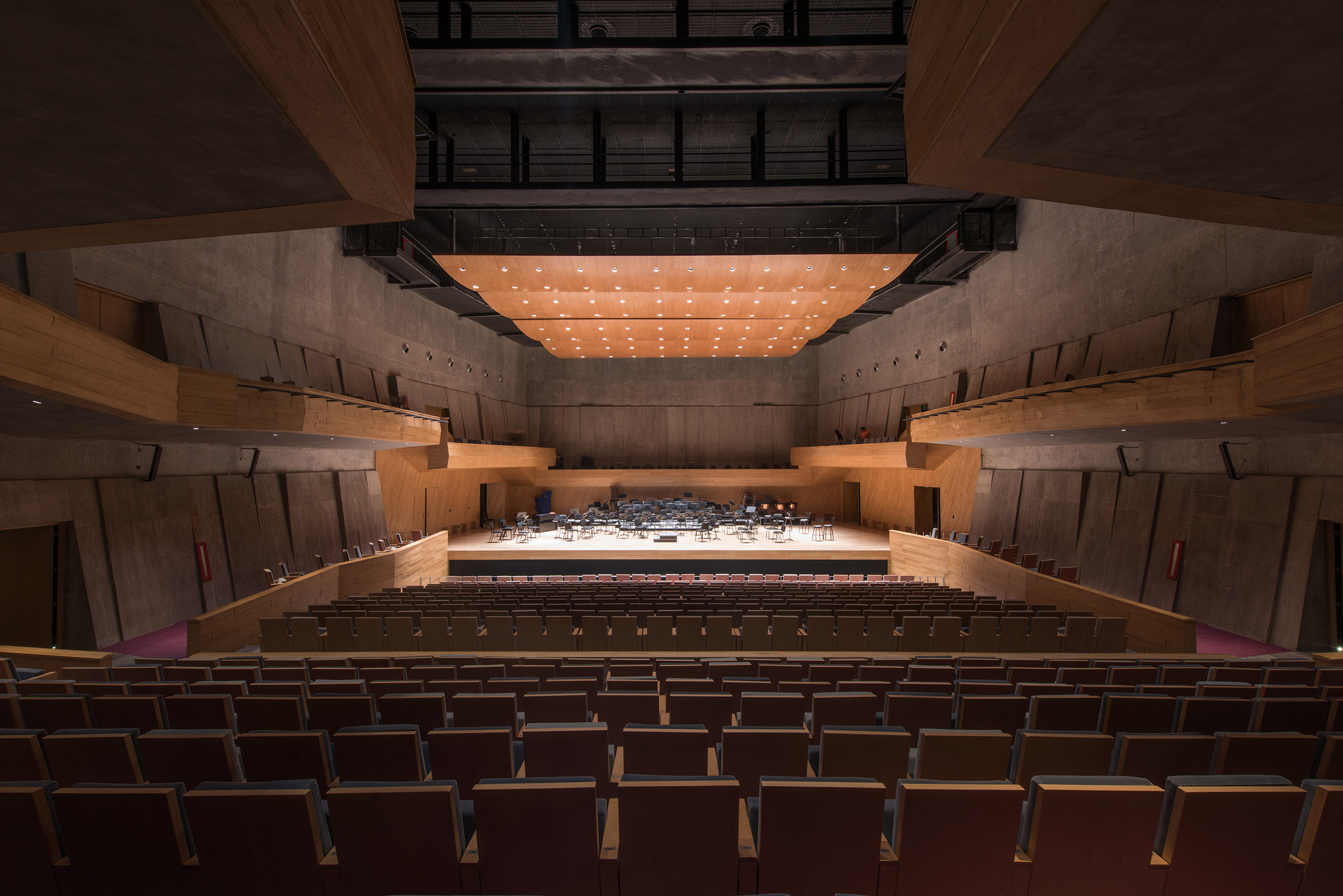 The daily activities of the philharmonic orchestra are accommodated at the rear of the building, where the compilation of small volumes hosts rehearsal halls for percussionists, pianists and solo performers. There is also a recording studio, changing rooms, an office and a musical library. 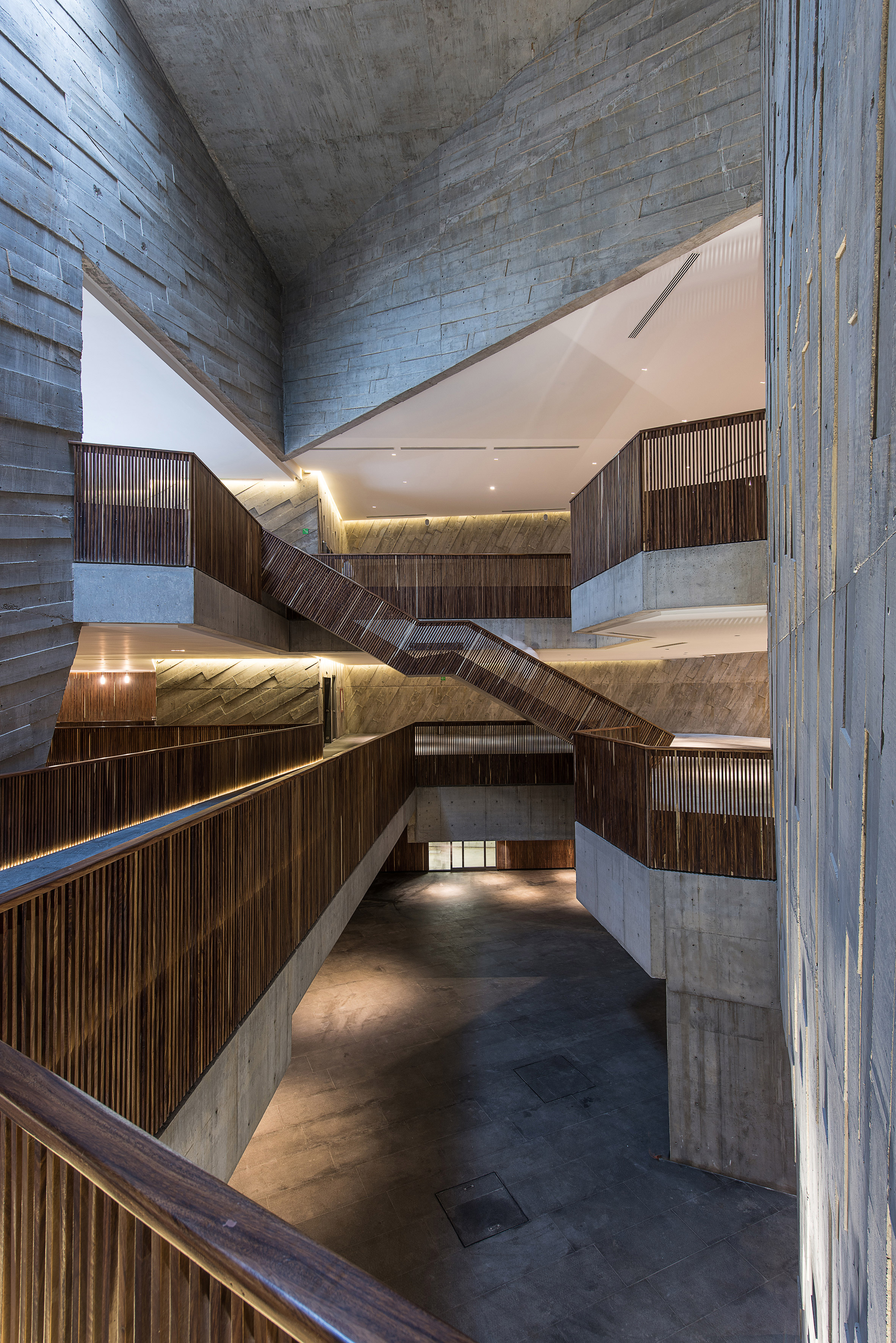 These facilities will also be used to offer workshops, courses and various festivals, including a choral and orchestral programme for local children from low-income households. 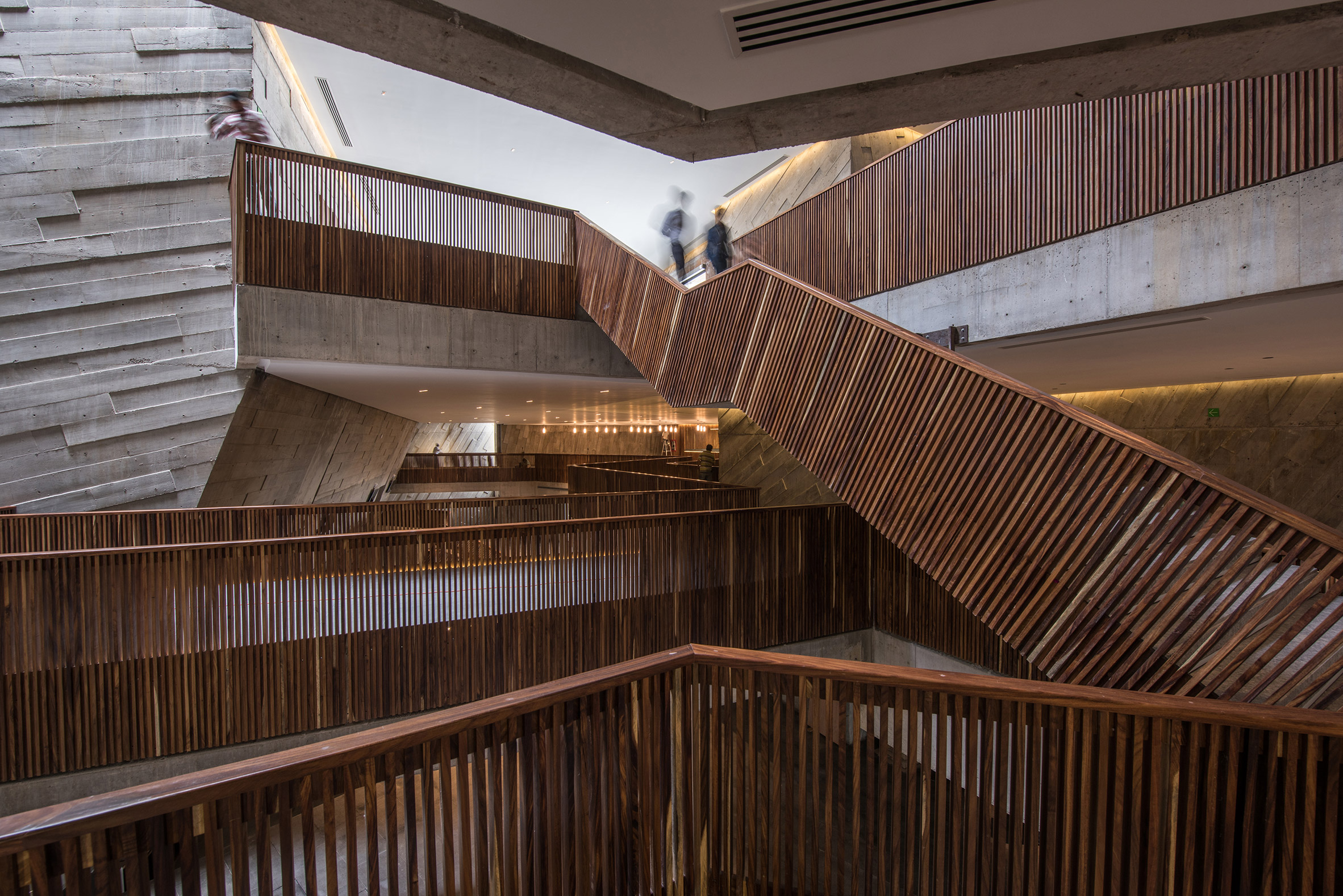 Other performance areas are created in more unusual spaces, including the network of walkways and staircases with slatted wooden balustrade create extra nooks for solo cinema, theatre, dance and theatre performances. Films can be screened on large internal walls.

There is also a cafe and a restaurant that opens onto a rooftop seating area overlooking the sea.

Rojkind Arquitectos was founded in 2002 by Michel Rojkind, and has established a reputation as one of Mexico’s leading firms, with projects including the Nestlé Chocolate Museum in Mexico City, a laboratory building for the same company in Querétaro, and the renovation of Mexico’s National Film Archive and Film Institute. 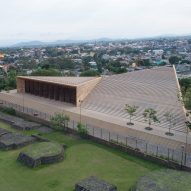 Photography is by Jaime Navarro, unless stated otherwise.