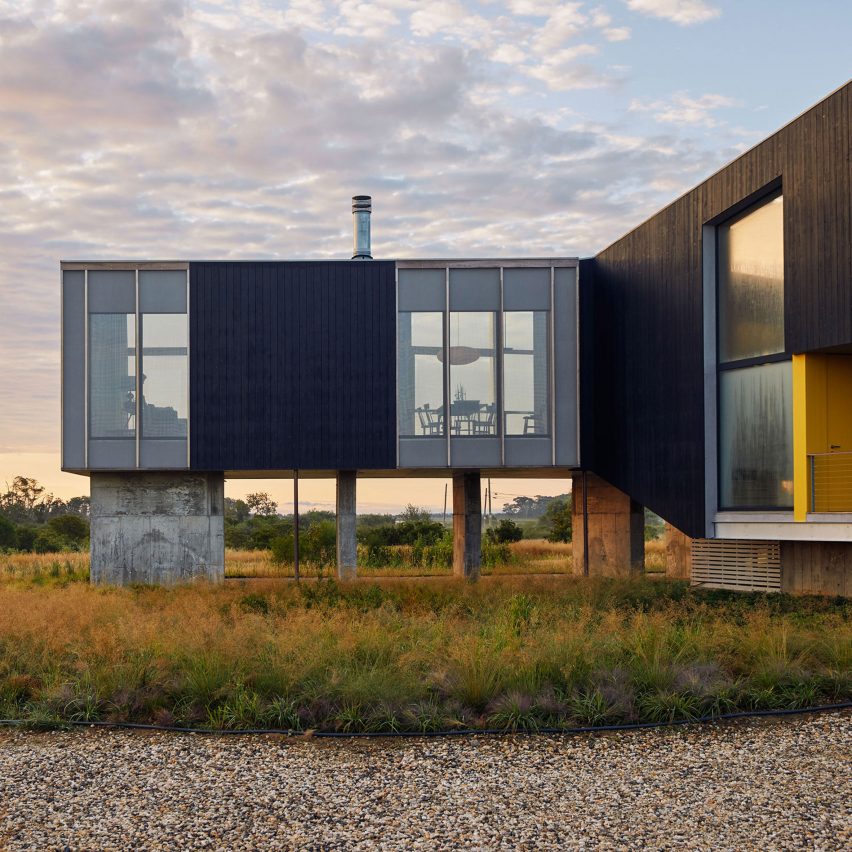 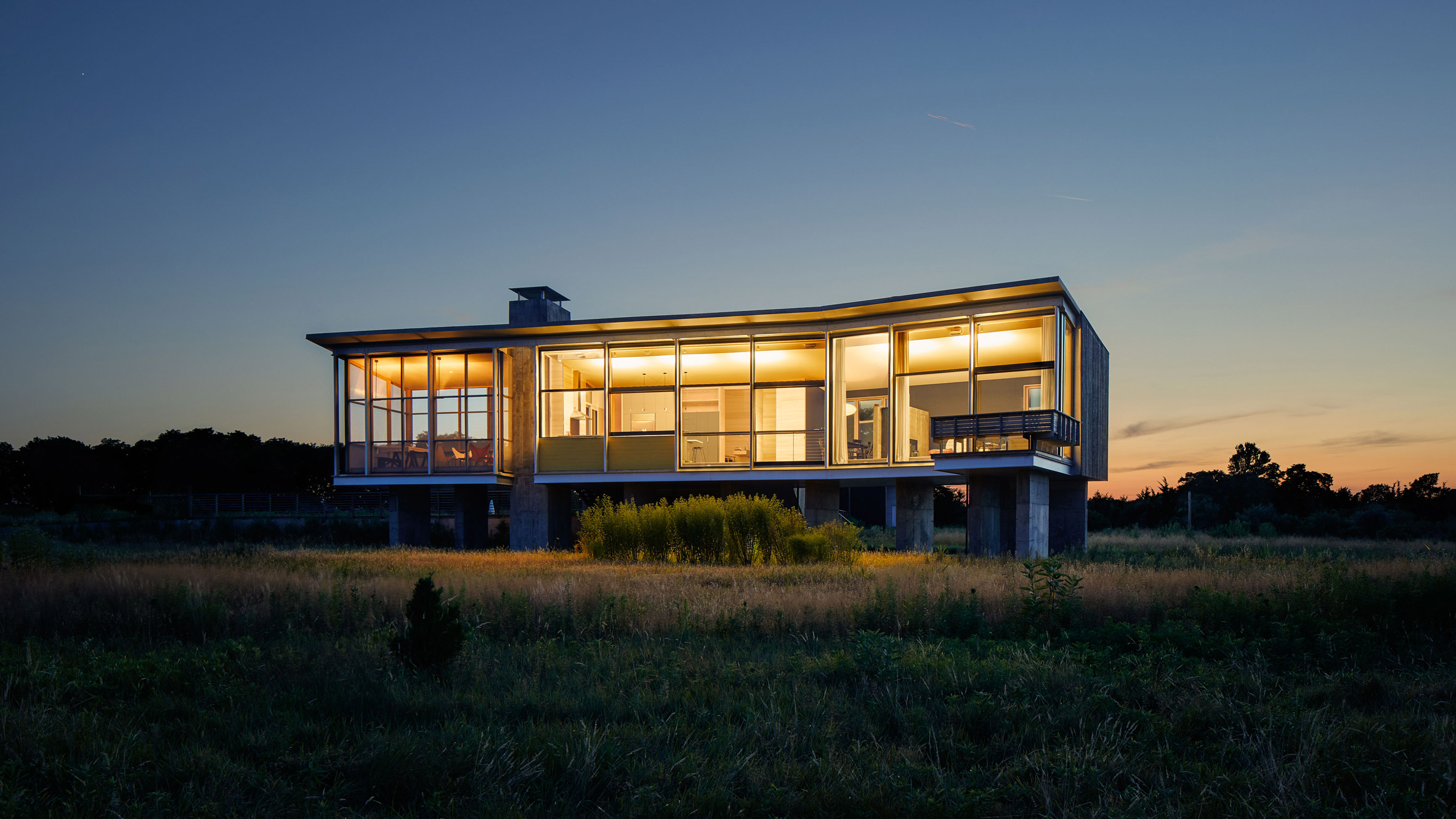 Wetlands House is located in the hamlet of Orient, which occupies the very tip of Long Island‘s North Fork. Designed as a weekend getaway for a Brooklyn couple, the three-bedroom dwelling sits on a 15-acre (six-hectare) waterfront property that was once used for growing potatoes. A third of the site is a lush tidal wetland. 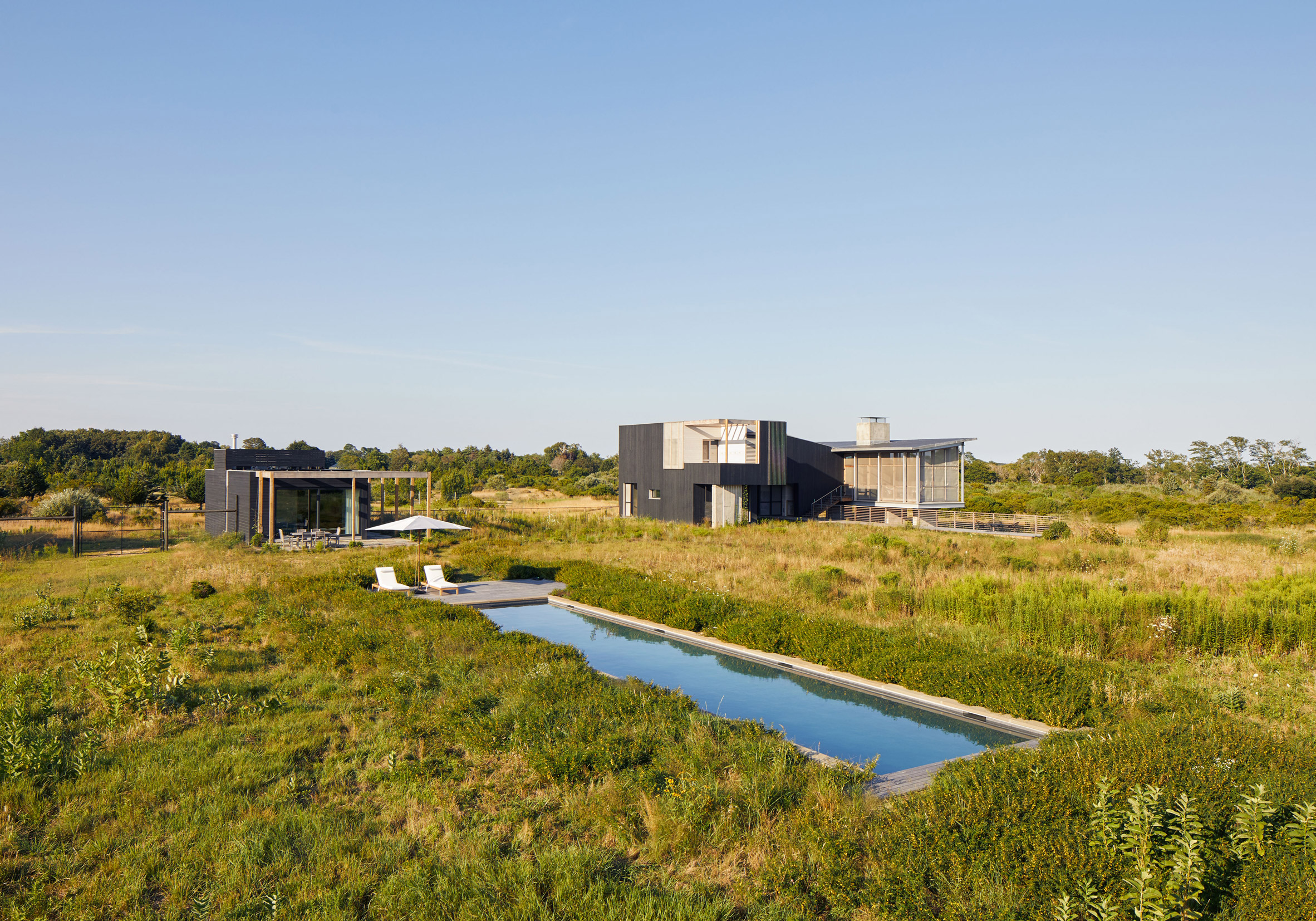 The design team had several key goals, including providing a strong connection to the landscape and ensuring the house could withstand the elements, including salty sea air and coastal flooding.

In response, the team conceived an irregularly shaped dwelling made of durable materials. 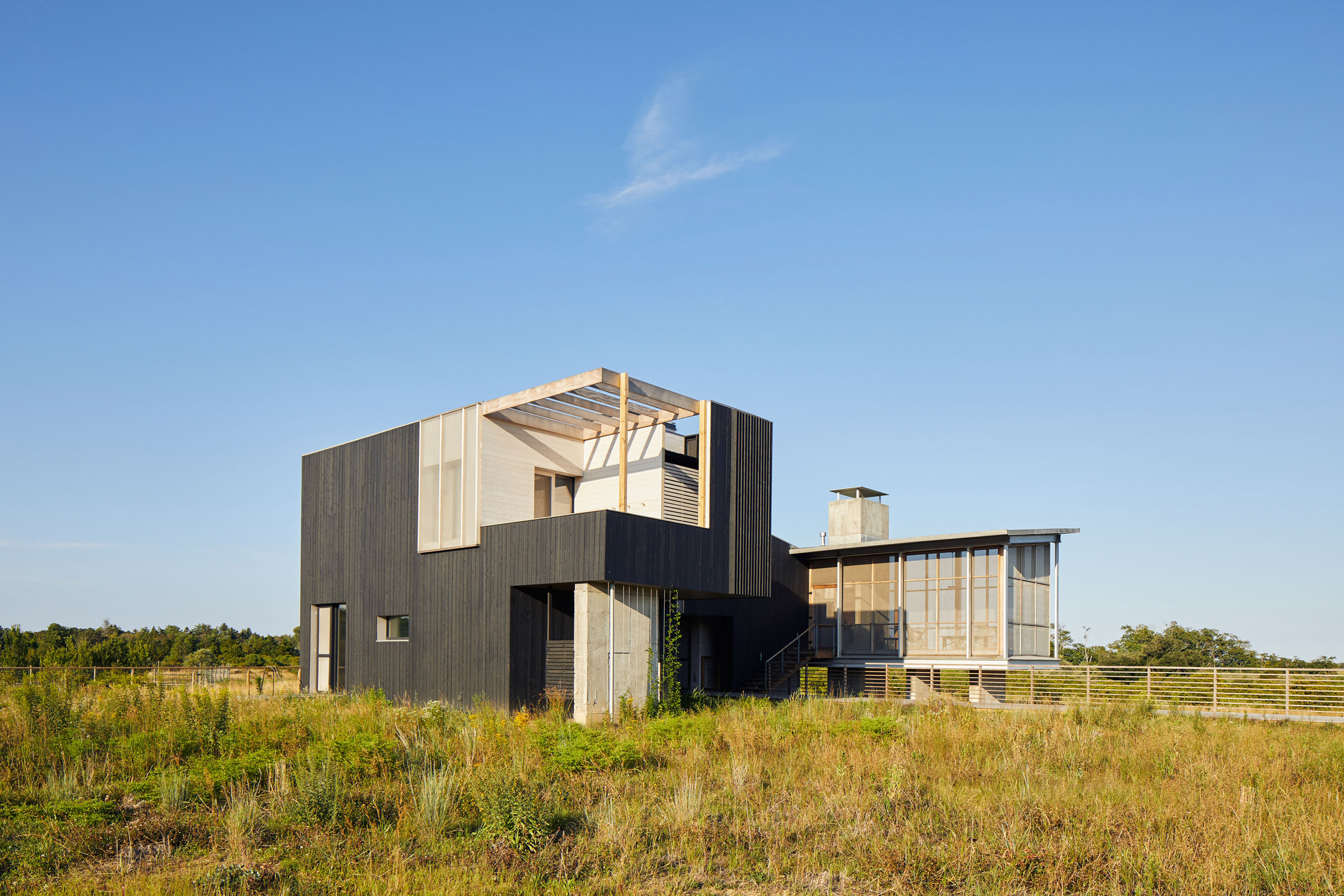 A portion of the building sits atop poured-in-place concrete piers, enabling water to pass underneath, while also providing occupants with elevated views of the terrain.

“Because of the ever-increasing severity of storm surges, the owners agreed to raise the main living floor 10 feet (three metres) above the natural grade, which consequently allows for wide, unobstructed views over the protected wetlands of Peconic Bay,” said Manhattan-based Ryall Sheridan Architects in a project description. 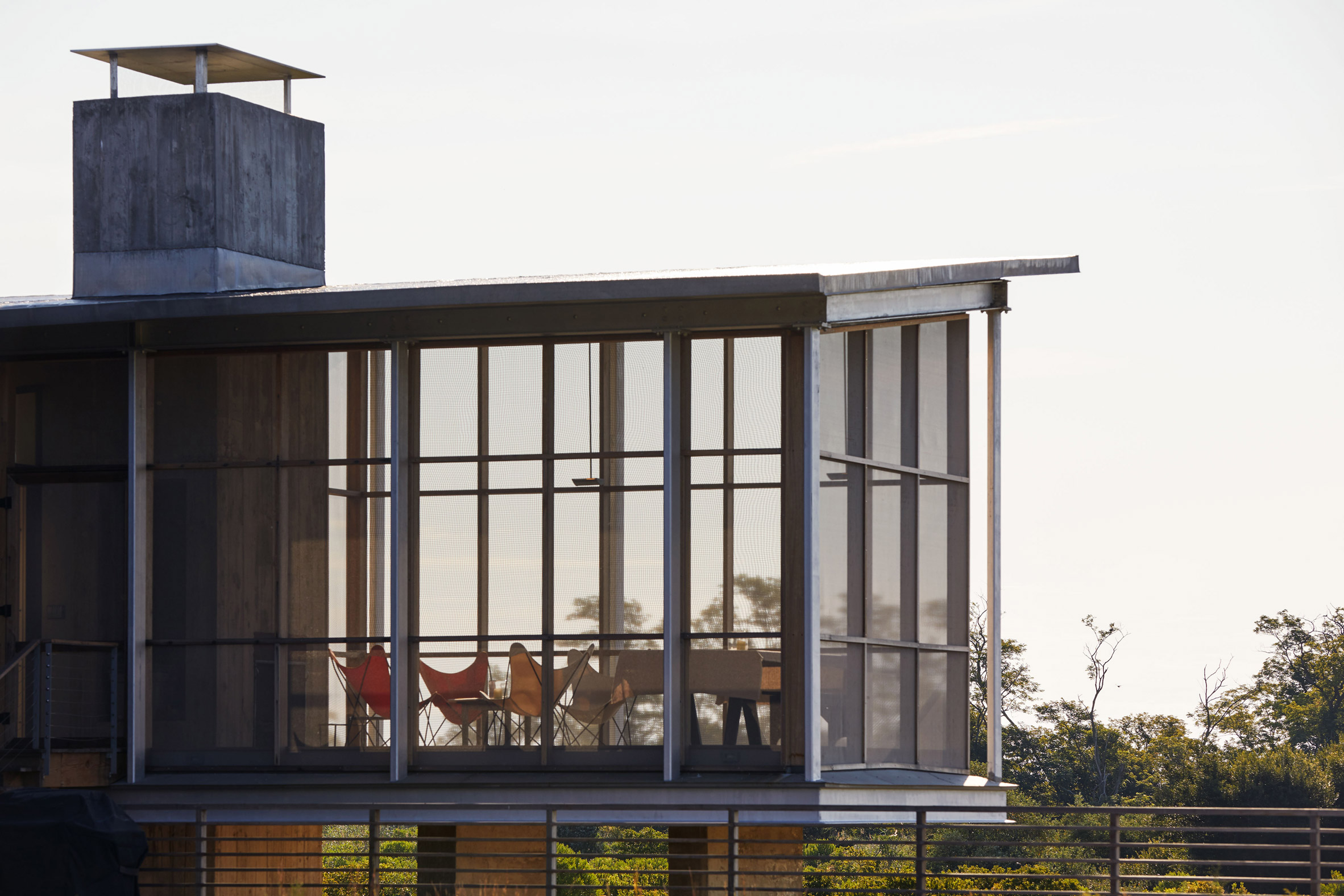 Each facade has a different look. Several exterior walls are clad in dark-stained cedar that appears black from a distance. The east-facing elevation features a glass wall that ushers in natural light and draws in the natural scenery.

The main floor of the 3,275-square-foot (304-square-metre) home is divided between public and private areas. A master suite occupies the far west end of the dwelling, while the east end encompasses a kitchen, dining area and living room. The central portion contains a media room and storage. 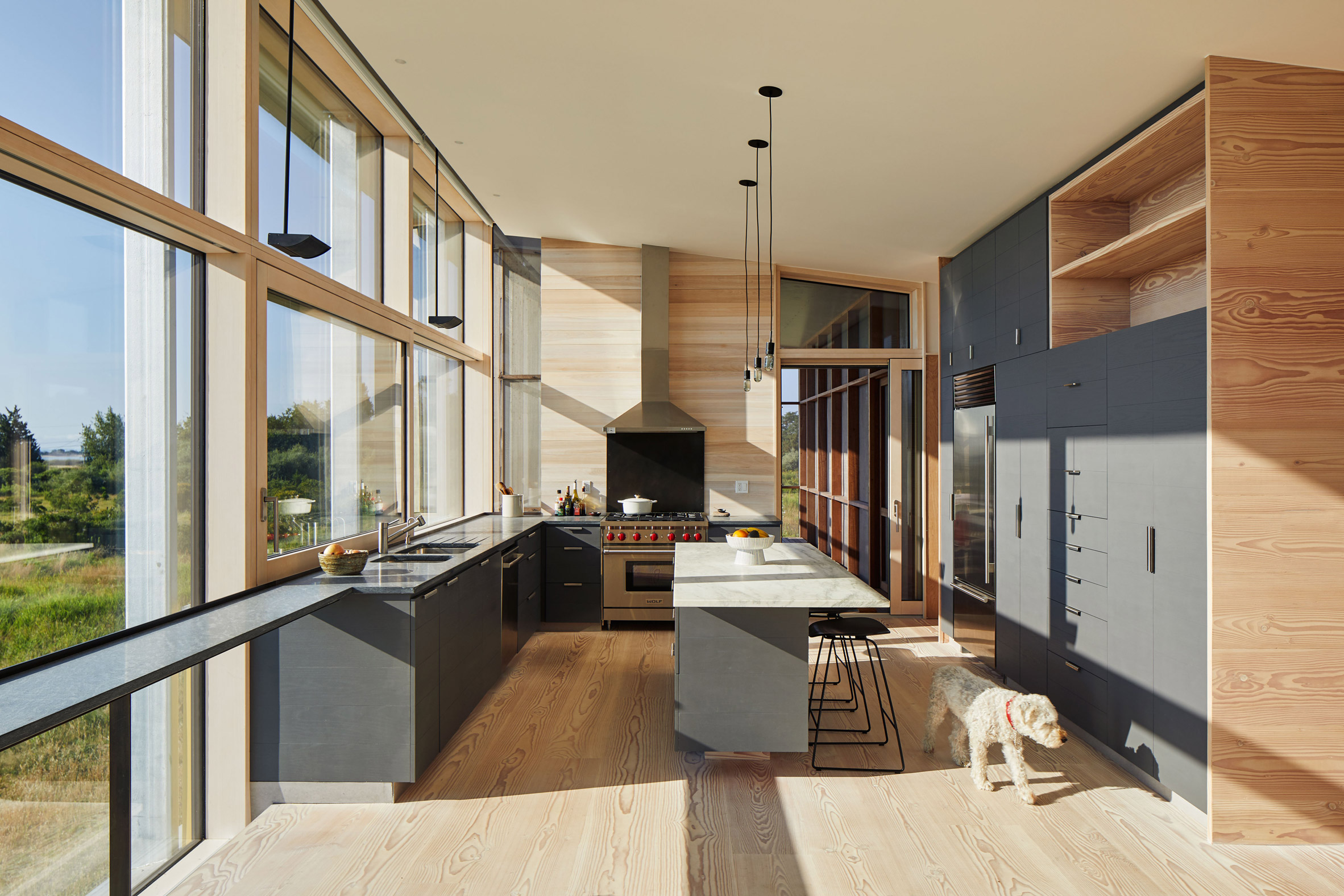 Extending from the south side of the home is a generous porch, which is wrapped in industrial-grade steel screens that are resistant to rust. A concrete fireplace allows the porch to be used on chilly days. 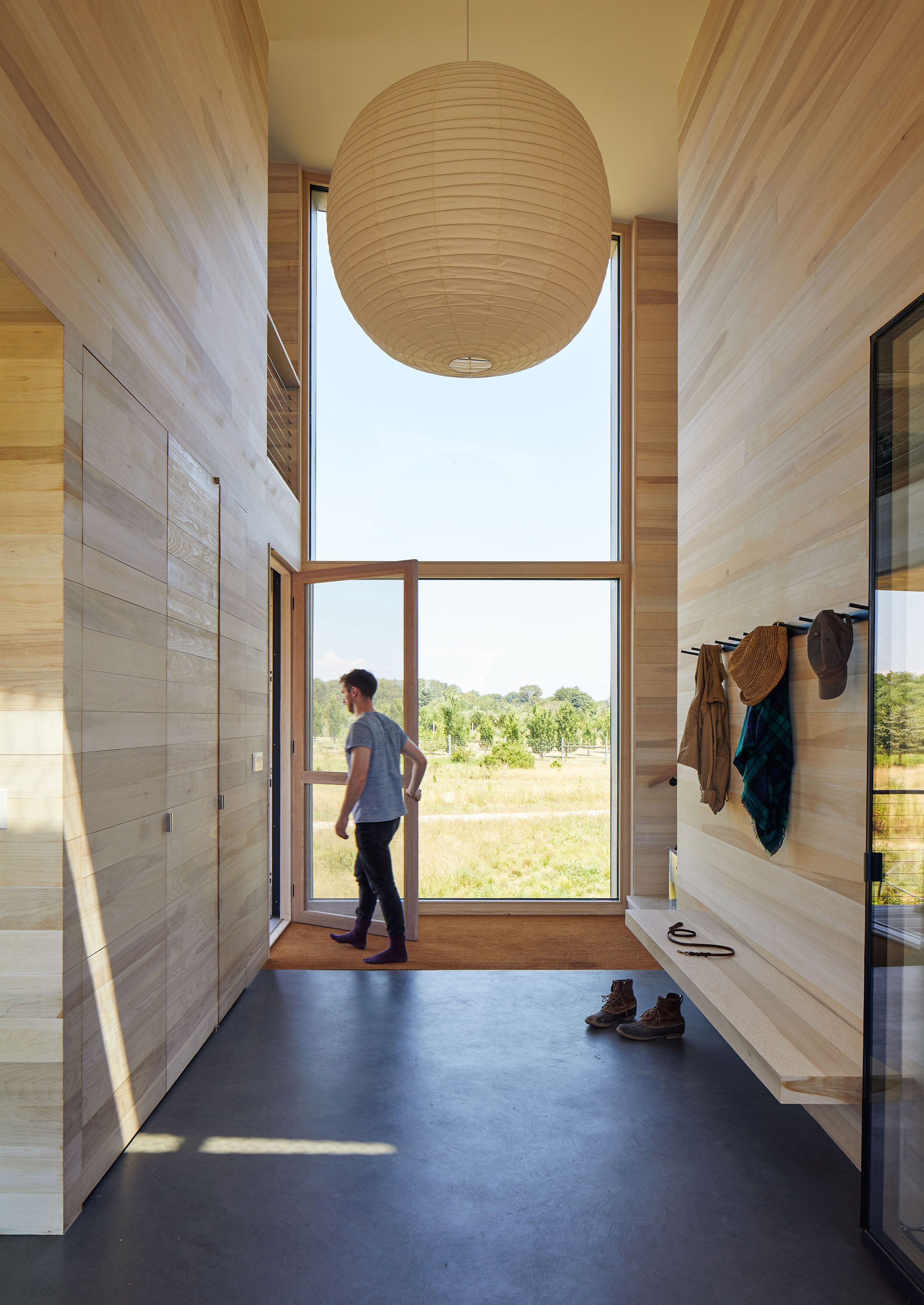 A half-flight below the main level is storage space and two guest rooms. Both rooms open onto a meadow that is raised slightly to protect the dwelling from floodwaters. 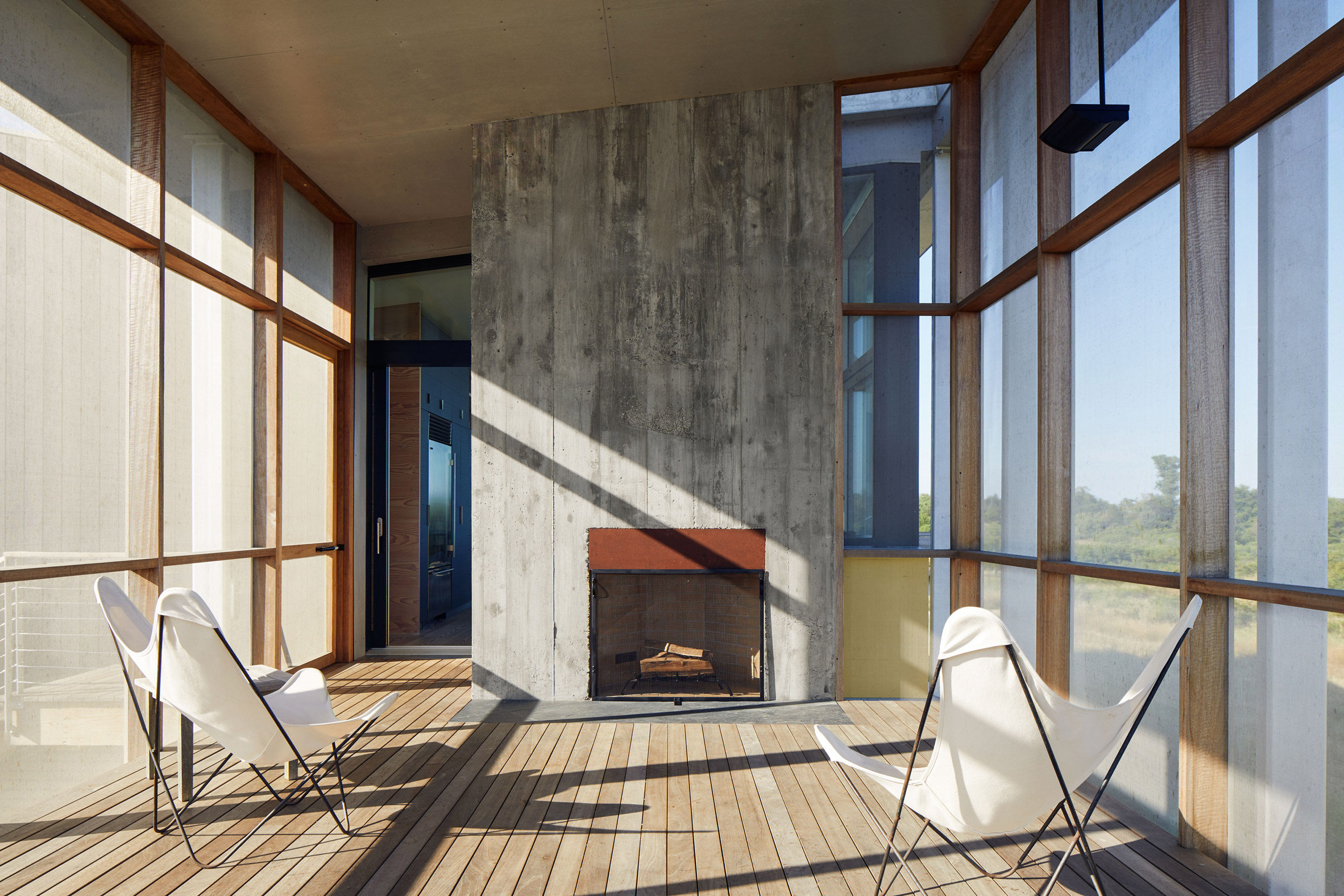 A subdued colour scheme was employed throughout the dwelling, with the occasional pop of vibrant hues. In the guest bathrooms, the team used bright yellow and red paints from Le Corbusier‘s “architectural polychromy” collection, which consist of palettes created in 1931 and 1959. 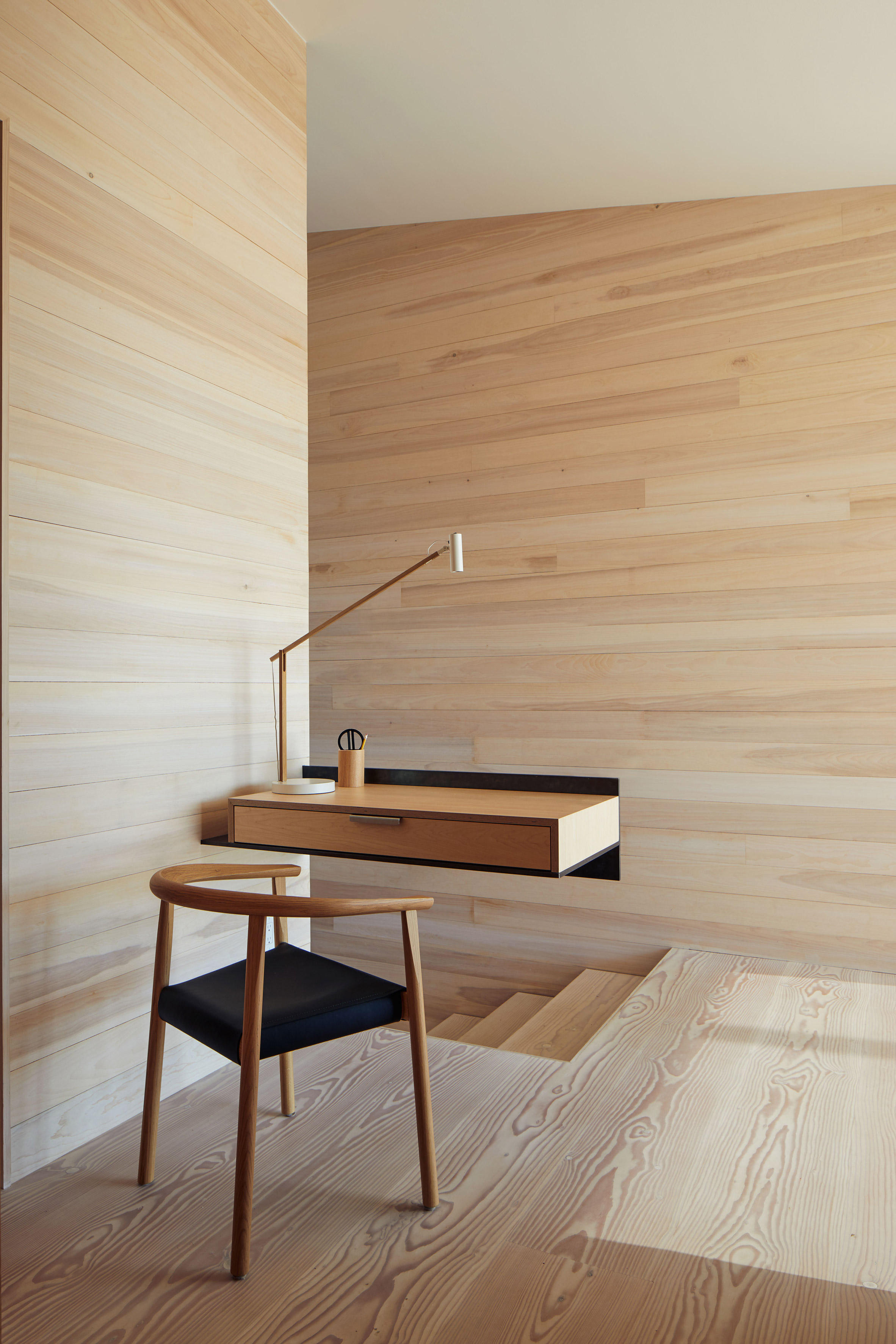 The home was designed to align with Passivhaus standards. Among the energy-saving features are triple-glazed windows, wall insulation made of eco-friendly cellulose, and a heat-recovery ventilation system. The dwelling’s power needs are met by a rooftop solar array. 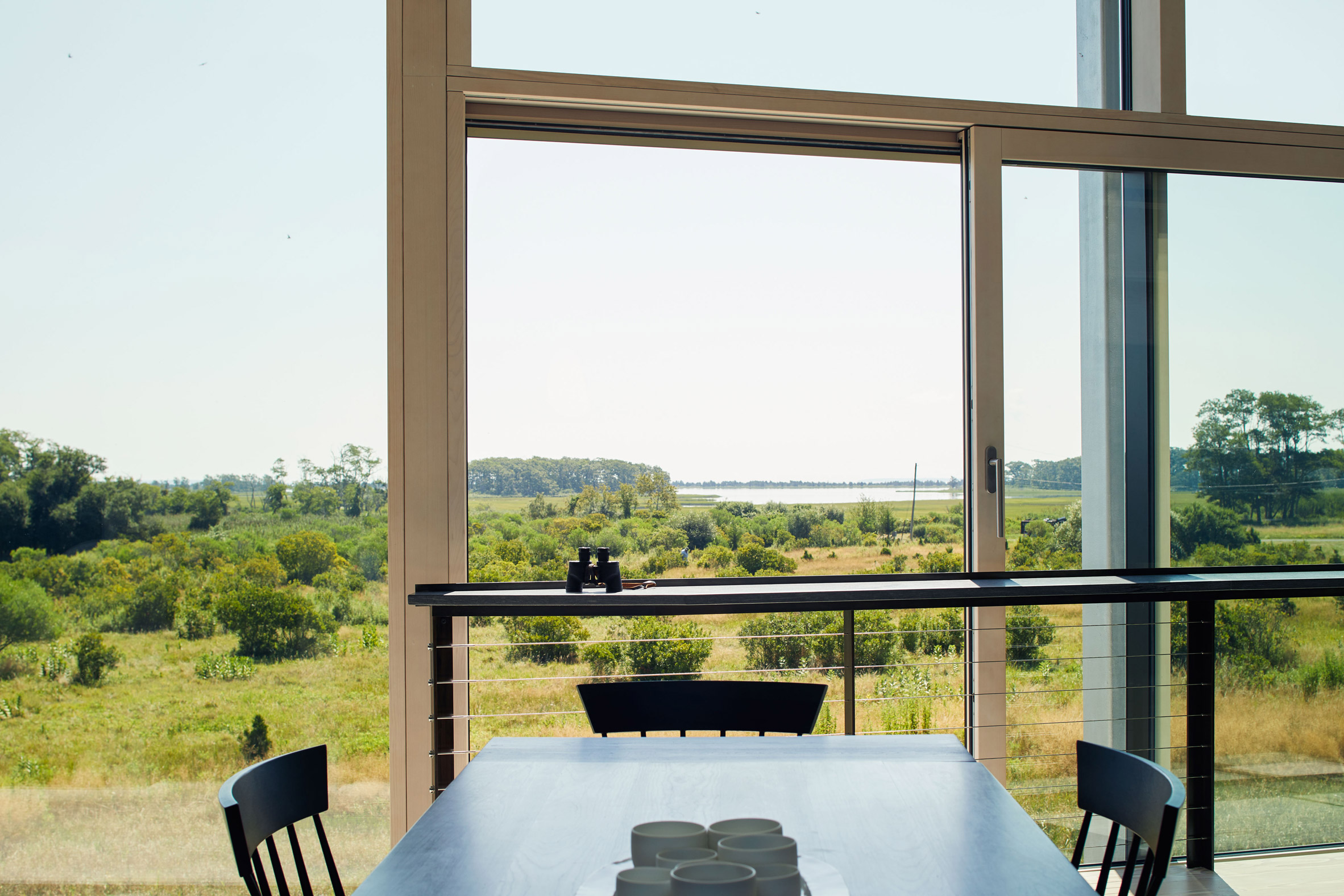 The property also features a detached structure containing a garage and a cabana. Nestled into the landscape is a saltwater swimming pool lined with flowering bushes. It is not uncommon to see birds, bees and butterflies fluttering around the site, due in large part to the reintroduction of native species.

“Even though most of the land was untouched by construction, the entire property was restored to a natural state by removing the invasive, non-native species and adding indigenous plants,” the team said. 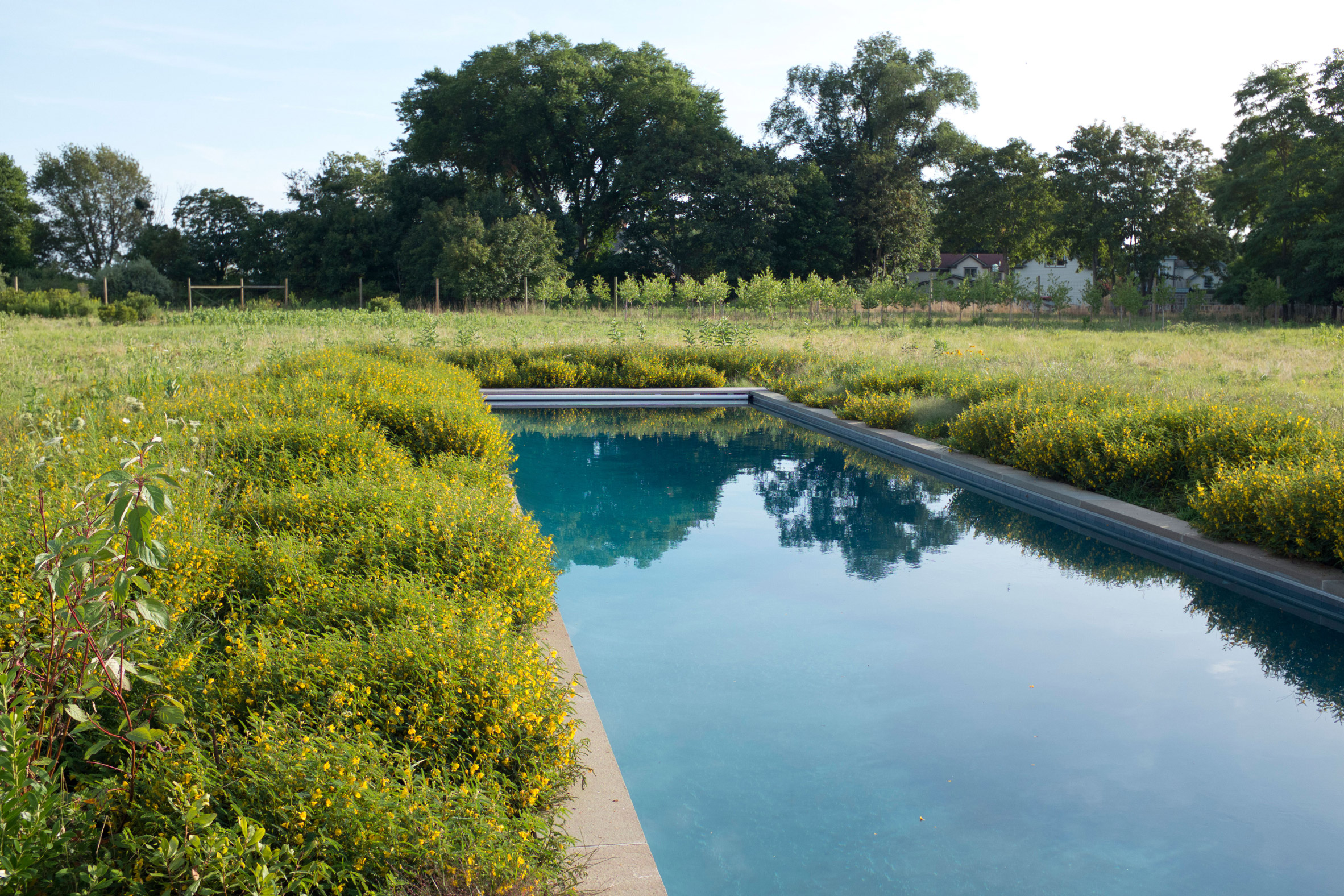 Just a few hours outside of Manhattan, Long Island is a favoured spot for vacation homes. Other projects on the peninsula include a dwelling by Toshihiro Oki with walls made of pale clay bricks, and the Hither Hills home by Bates Masi Architects, which consists of terraced volumes wrapped in stone and wood.

Photography is by Ty Cole at Otto.