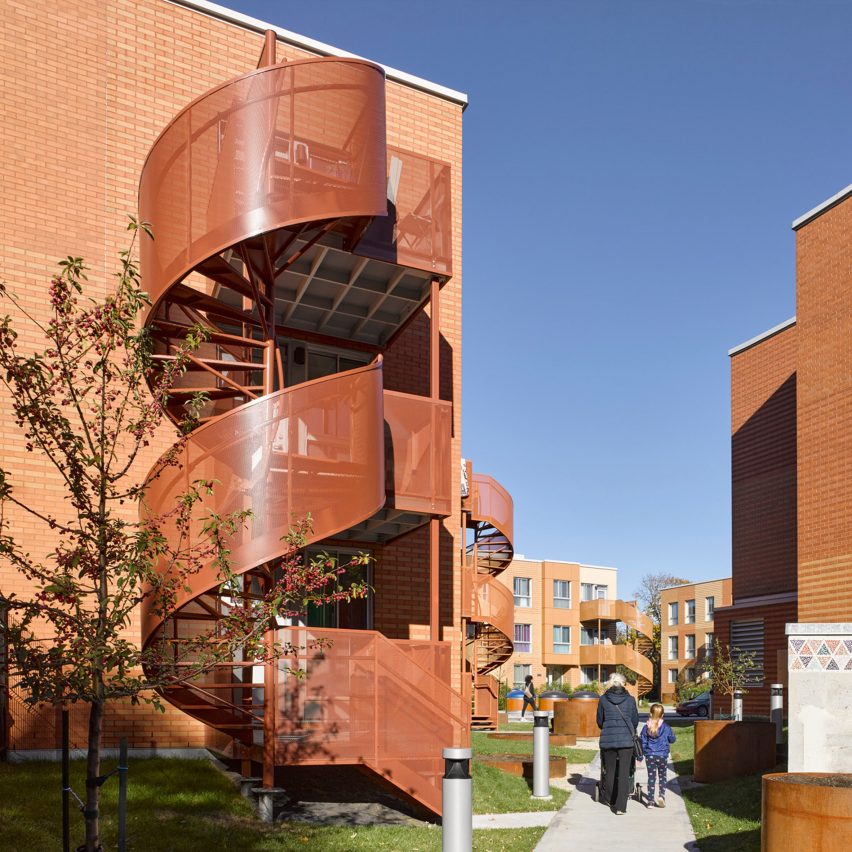 Colourful spiral staircases now give direct access to units in the Saint-Michel Nord housing complex in Montreal, which was renovated by Saia Barbarese Topouzanov to update the ageing buildings and include a new pedestrian-friendly street.

Located in the underprivileged Saint-Michel neighbourhood, the housing complex was built in the 1970s in the brutalist style. Its 185 units lacked natural light, and the building’s poor energy efficiency made them uncomfortable and costly to maintain.

“The shared street is very important to the project because it allows for open pedestrian paths with no dead ends, improving residents’ sense of security,” said the architects.

Along this axis, colourful spiral staircases lead to balconies directly outside each unit – an amenity that the complex previously lacked.

Spiral staircases such as these are a prevalent feature in Montreal’s walk-up buildings, providing exterior spaces that residents may not otherwise have access to.

“Overhanging rather than recessed balconies [create] added living space that is much appreciated in hot weather, particularly by people of modest means,” the team said.

Saia Barbarese Topouzanov chose a bright and cheerful finish for these exterior elements that gives each building a slightly different hue, while tying the overall composition together. 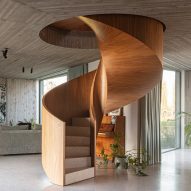 “The use of two similar colours to create a third made it possible to produce seven distinct colours using four base tones, from very pale yellow to a rich brick-red,” said the firm.

“In this joyful new setting, the use of colour helps build residents’ sense of belonging and identity.”

Locating the staircases outside also allowed the studio to redesign the layout of apartments. Those that were previously separated by an internal corridor now enjoy at least two exposures.

Interiors were refreshed, and taller windows were fitted to bring in more natural light.

The project also involved adding a restaurant, a childcare centre and a youth club to the ground floor of the complex, aiming to help foster a sense of community among residents.

“The architects wanted to transform constraints into assets and offer residents a dignified, luminous and safe environment, disrupting the stigma surrounding social housing and its association with poverty,” said the team.

The renovation project was completed in September 2020, and earned a 2021 Excellence Award from the Ordre des Architectes du Québec in the multiple dwelling units category.

Other housing projects that use colourful accent features include a pair of bright blue buildings in Denver that contain eight studio apartments designed by Productora, and a village of tiny homes in Los Angeles that can provide temporary shelter for up to 200 homeless people.

The photography is by James Brittain.