The zigzag profile of this Canadian lake house allows natural light to enter deep into living spaces from skylights, while helping orient solar panels to maximise their efficiency.

Located beside Ontario’s Stoney Lake, the 3,100 square-foot (290 square metres) Sky House nests into a steep site leading down to the water. To respond to this condition, the architects stacked two volumes on top of each other at irregular angles.

“The lower volume nestles into the landscape so that it is barely visible as one first approaches the house,” said architects Julia Jamrozik and Coryn Kempster. “The upper volume rests on the lower one and on a concrete pier to form both a bridge and a cantilever.”

On the upper floor, the architects laid out all of the home’s social spaces, which are contained in a longitudinal band. The open-plan kitchen, living and dining space overlooks the lake. 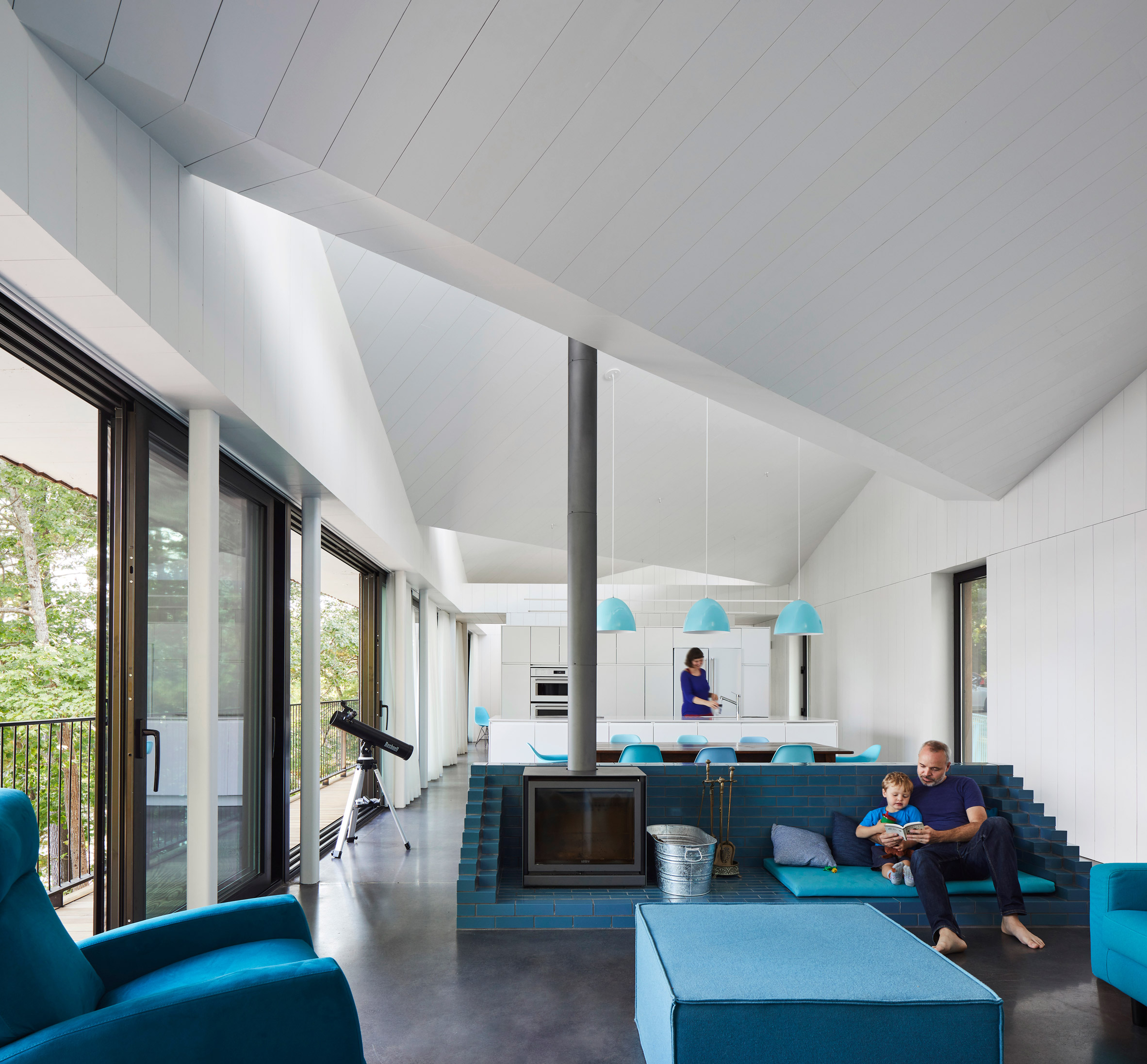 An exterior walkway runs along the south facade of the home, and the lower level’s roof forms a terrace outside the main living space. “A covered walkway shades the main wall of glass from summer sun while admitting lower winter sun to passively heat the dark-dyed concrete floor,” the architects said.

Out of consideration for wheelchair-bound guests, as well as the residents’ long-term use of the building, the team included all the amenities necessary to live exclusively on this floor, including a study, bedroom, and a universally accessible bathroom. 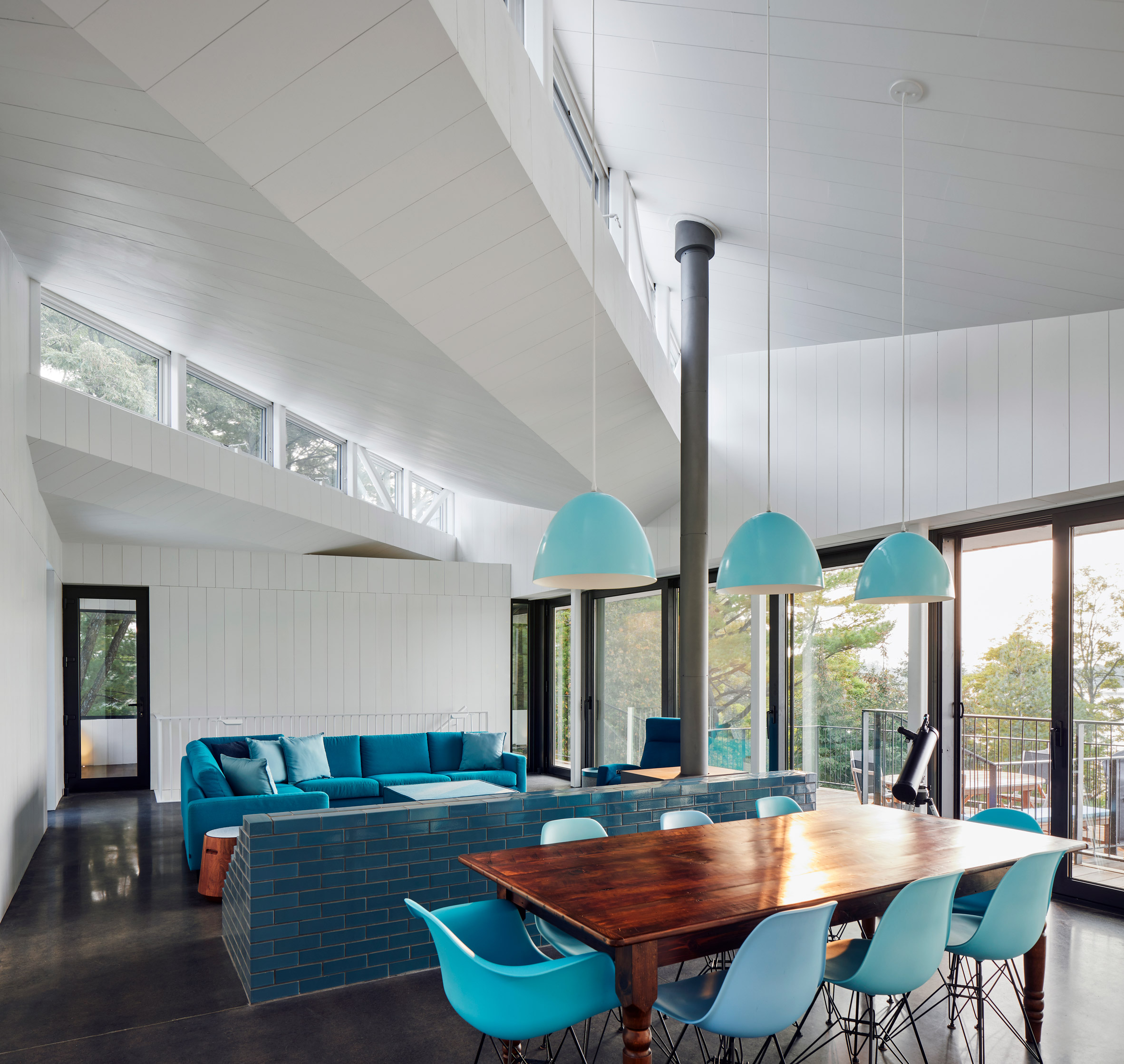 The shape of the sawtooth roof that tops the building has a dual purpose. “The factory-inspired skylights are rotated to admit north light without heat gain, while orienting the solar panels due south so the house can generate all of its own power,” Jamrozik and Kempster said.

Blue furniture elements, like a built-in brick platform for a wood-burning stove, a bright sofa, and hanging light fixtures lend a playful atmosphere to the interiors. 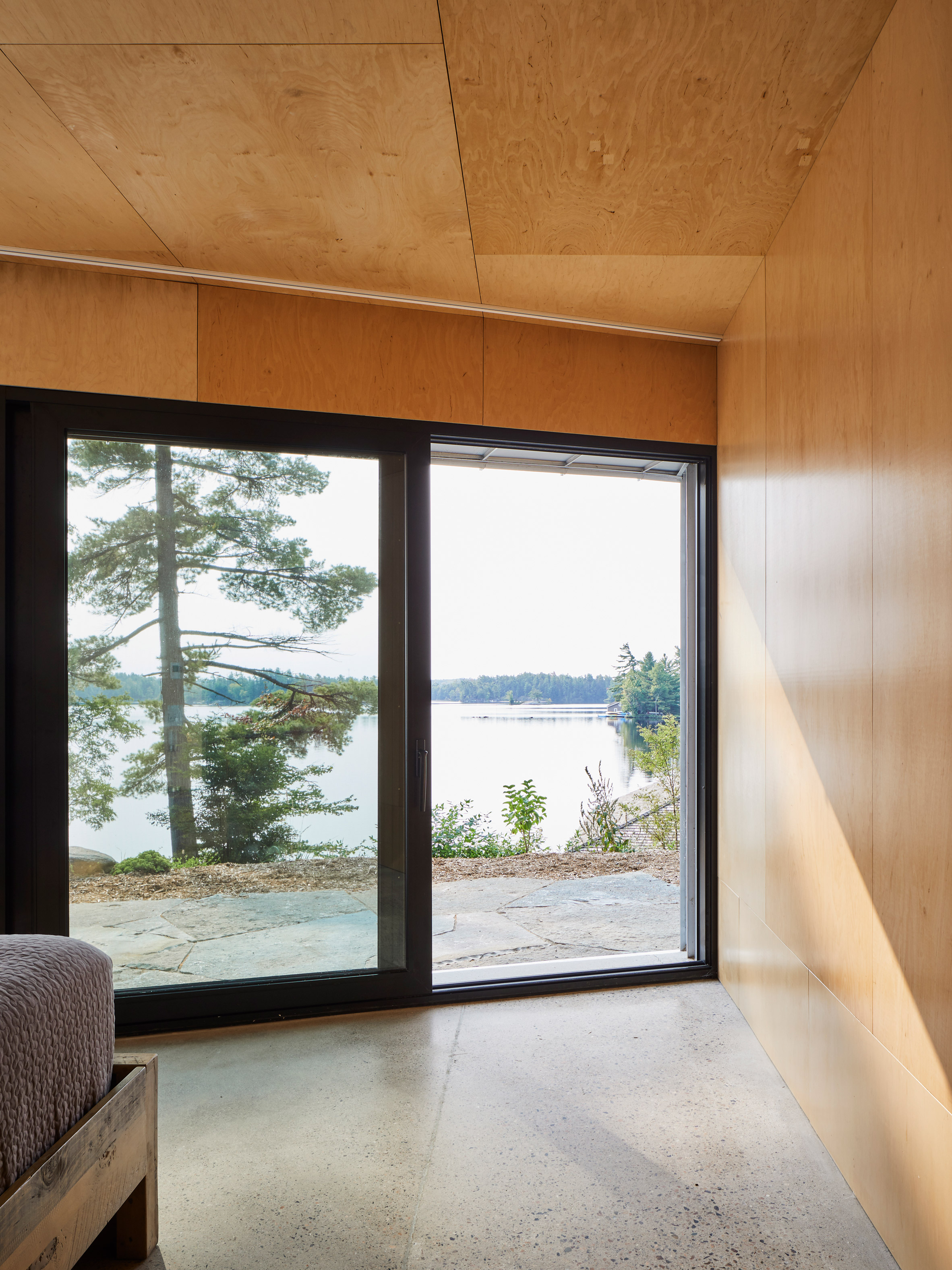 The lower level accommodates three additional bedrooms and a den. Similarly to the upper floor, these are laid out along a corridor, with the master bedroom placed at the end.

Plywood panels line this hallway and the master bedroom, unlike the upstairs spaces, which are rendered in white. A swing set hangs from underneath the upper volume as it cantilevers from the lower portion. 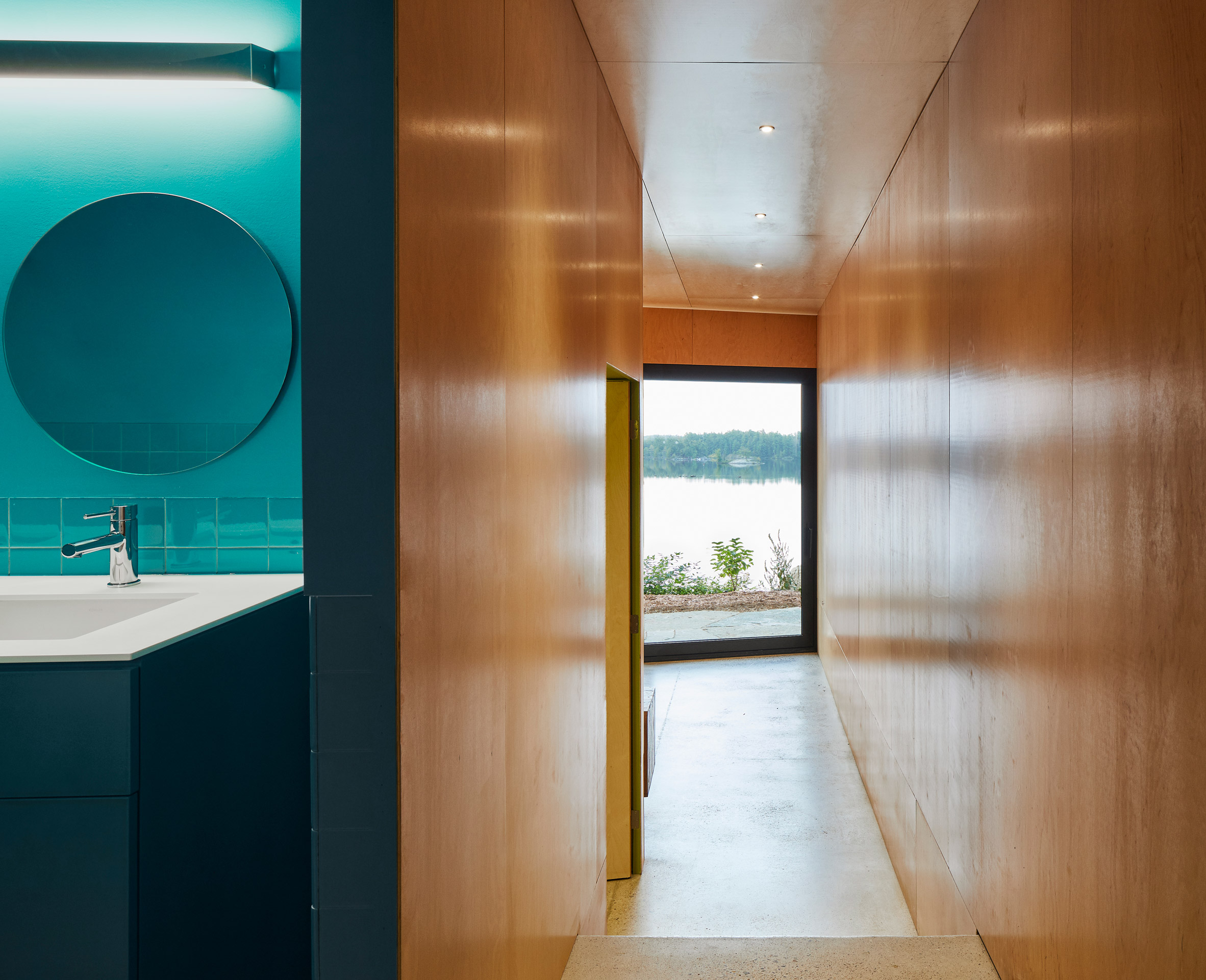 Different materials clad the upper and lower levels of the home. For the base, the architects chose standing-seam metal panels with a reflective finish.

The upper level was finished in petrified wood planks, which have improved weather resistance. “Simple, low-maintenance, long-life materials are used on the facade,” said Jamrozik and Kempster. 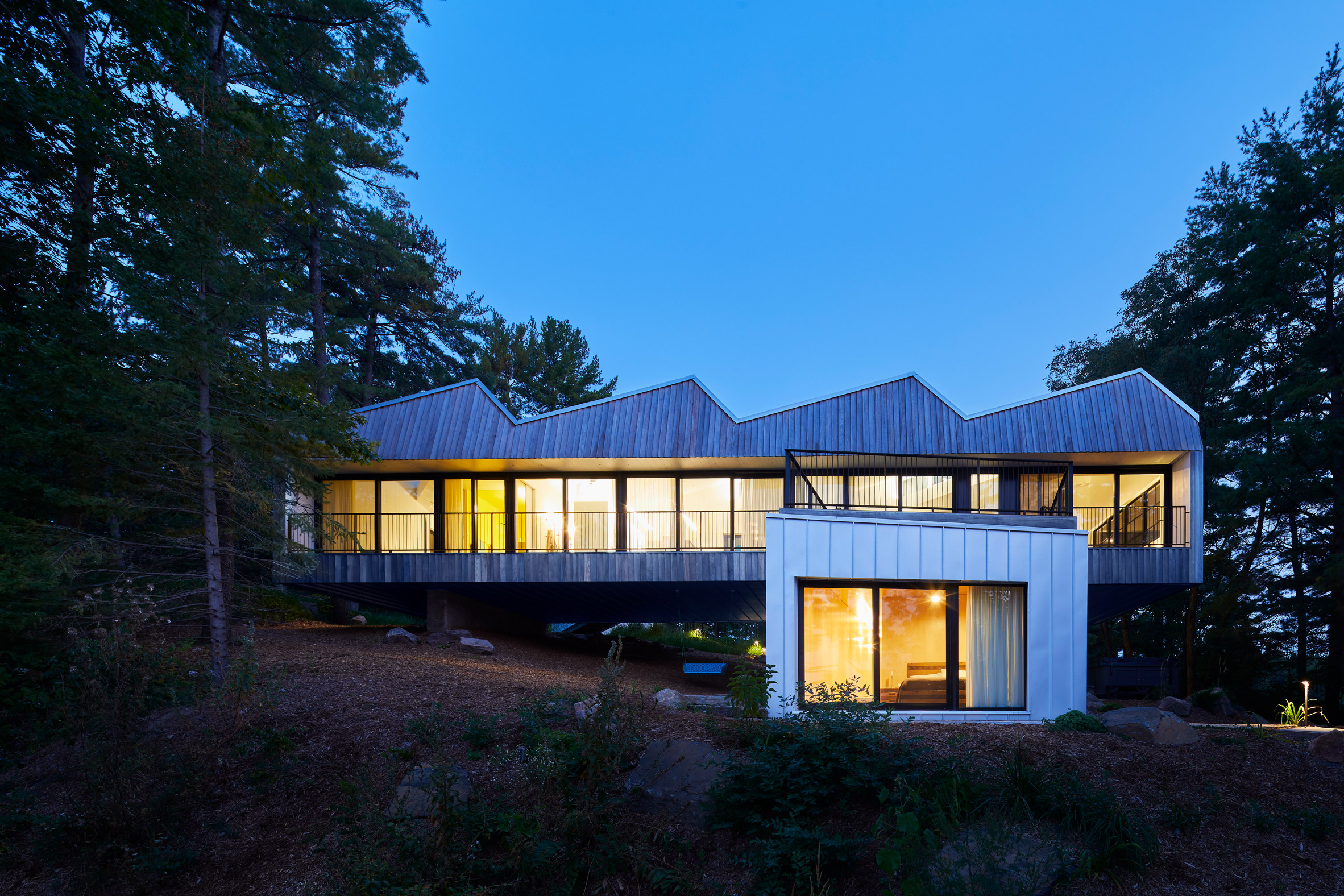 Other waterfront homes in Canada include a black cabin by Mu Architecture with a two-storey boathouse, and a wooden home by Atelier Pierre Thibault made up of two volumes connected by a bridge.