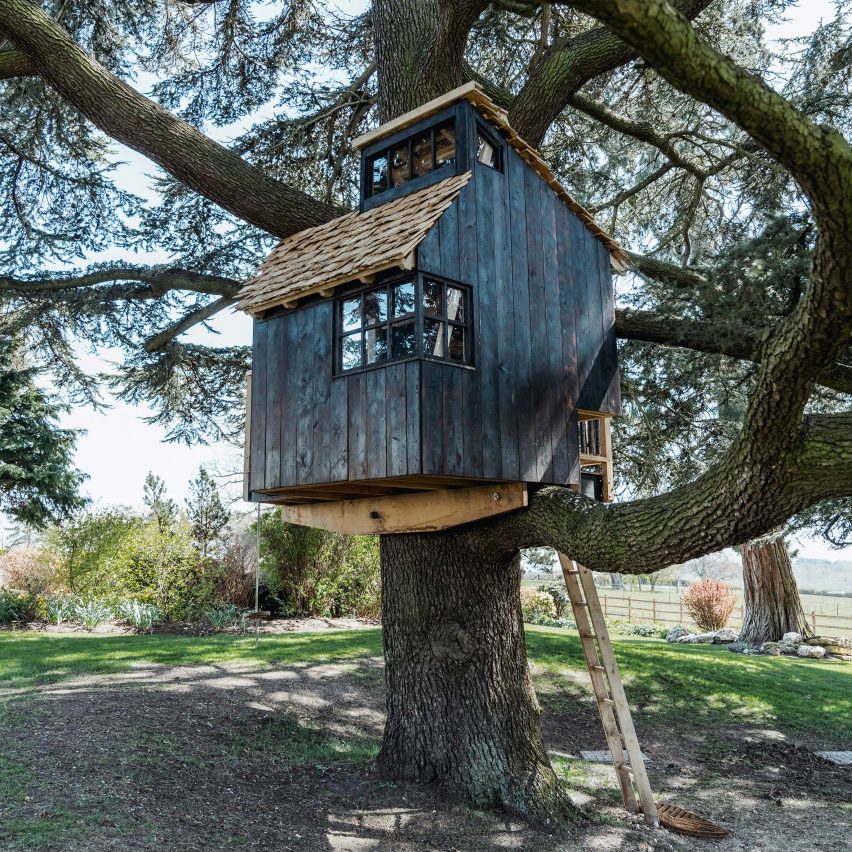 Designer Sebastian Cox has designed a treehouse in the English countryside that features scorched larch cladding, a shingled roof and a balustrade of chestnut branches.

Cox’s studio created the treehouse in Hertfordshire for the children of a client, who now have a private play area within sight of the family home.

Made in collaboration with Root and Shoot treehouse builders and engineer Timberwright, the cabin is made from a combination of English ash, sweet chestnut and larch woods.

It sits on the lowest branch of a large Atlas cedar.

The designers wanted to create a structure that blended into the tree, so they avoided putting in posts extending down to the ground.

Instead, the 2.5 by 2.3-metre house is built onto two cantilevered chestnut beams that they called “the chopsticks”. It is anchored onto the tree at a minimal four points.

Inspired by the “flexibility and strength of medieval buildings”, the studio created the treehouse’s frame from English ash using pegged mortise and tenon joints, which give it a precision look.

It chose the scorched larch external cladding for its shadowy quality, allowing the treehouse to recede into the tree.

Old-fashioned roof shingles are made from shakes of chestnut wood. Because these are cleft rather than sawn, the shakes have a rough finish.

A balustrade made of chestnut branches from a coppiced tree surrounds the balcony. While the house has only small windows, a central light well stops it from being dark inside.

“We wanted to produce something simple and measured that felt as though it were part of the tree,” said Sebastian Cox studio co-director Brogan Cox.

“We didn’t want to create something loud and shouty or something that dwarfed the tree in scale or size.”

“The cedar tree is in a prominent position as you approach the house down the drive so we wanted to make something which was subtle and receded into the tree in some way,” she added.

“Hence the scorched cladding and subtle windows which are low and relatively small.”

Sebastian Cox is known for his crafts-based work and environmental advocacy. His past work includes furniture made from mushroom mycelium and the low-carbon wood installation The Invisible Store of Happiness.

Photography is by Adam Firman.