In this exclusive Dezeen movie, Mexican architect Frida Escobedo explains why she used stacks of roofing tiles to create this year’s Serpentine Pavilion.

Escobedo’s pavilion, which was unveiled outside the Serpentine Gallery in Kensington Gardens, London, this week, is a secluded courtyard framed by latticed walls made from grey concrete roofing tiles. 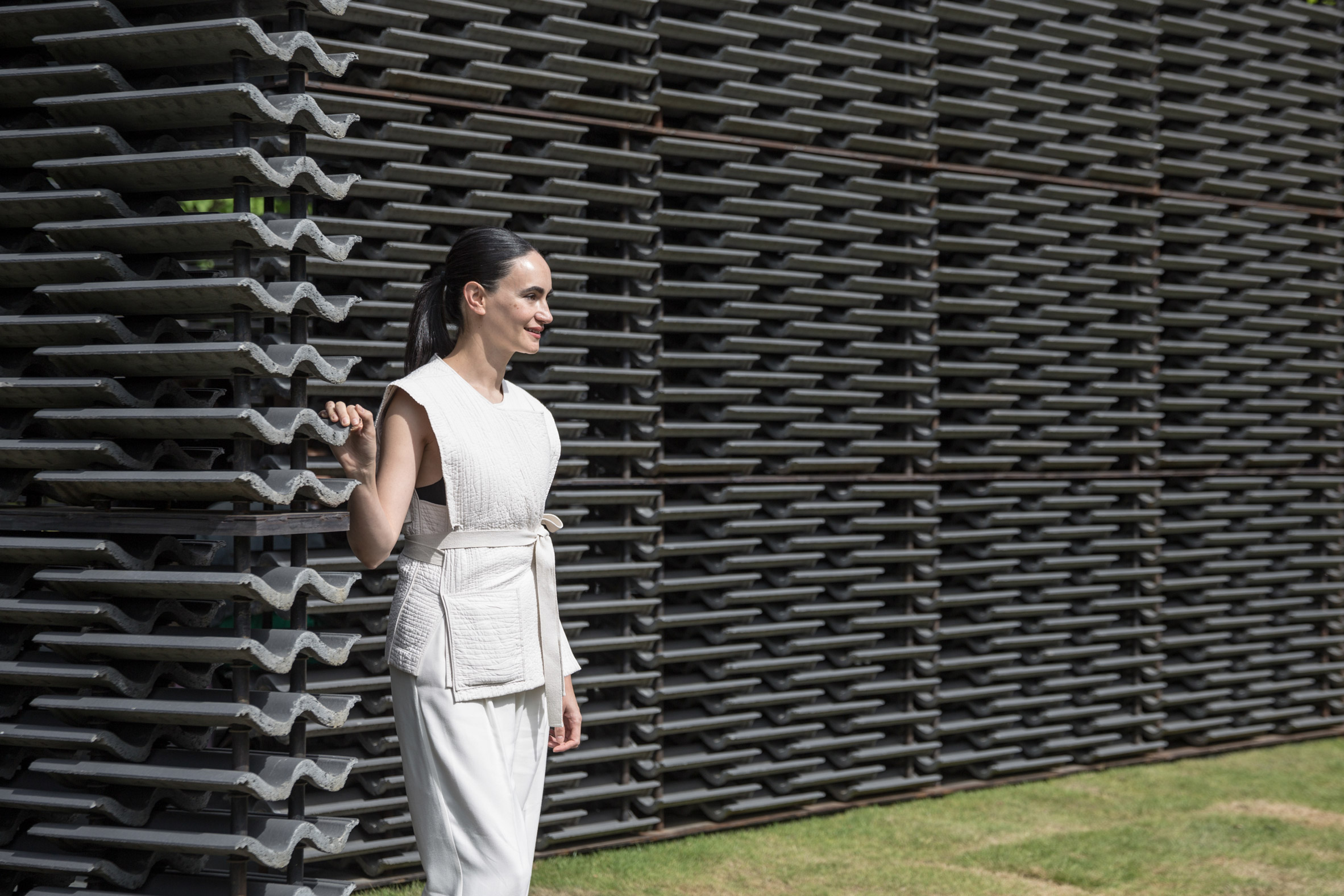 “We wanted to have a fresh idea for the pavilion but that would also speak about we do at the office on an everyday basis,” Escobedo says in the movie, which Dezeen filmed at the Serpentine Pavilion 2018 press preview on 11 June 2018.

“We usually work with simple materials – industrial materials – and we try to create more sophisticated forms or arrangements with them. It’s not about super expensive finishes, it’s about what you can create with simple things.” 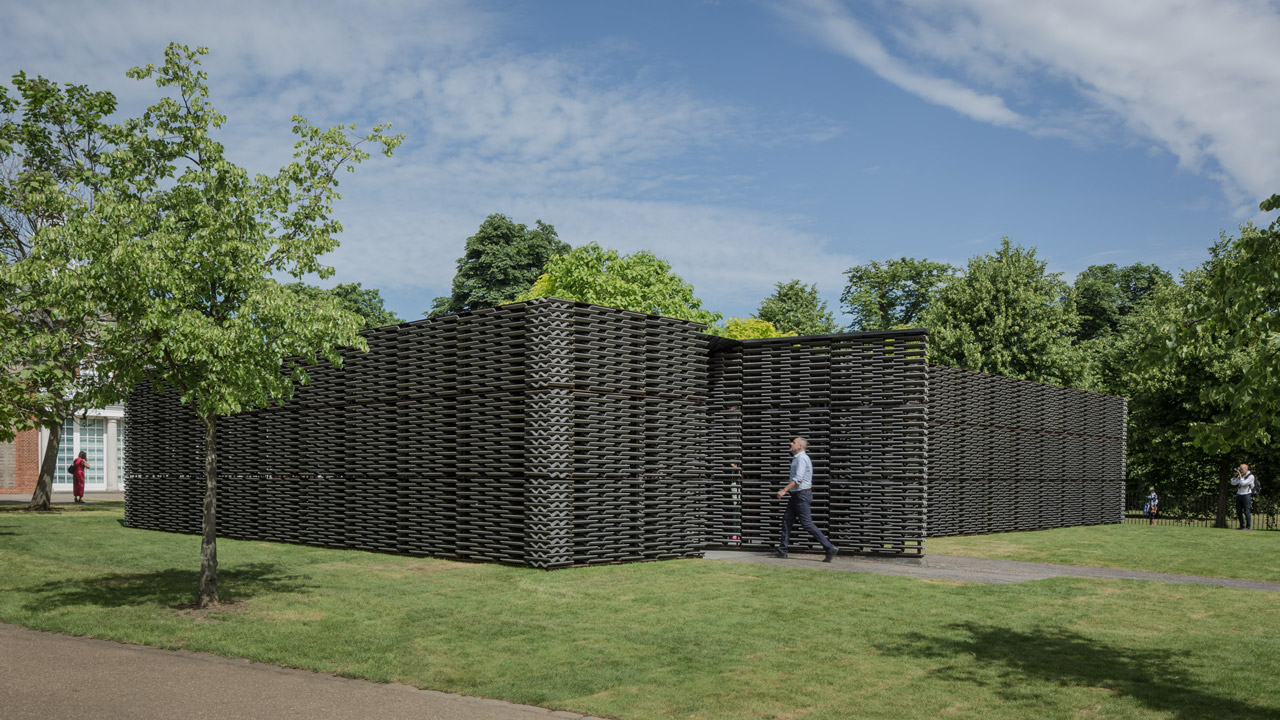 Escobedo stacked the UK-manufactured tiles in an alternating pattern to create a celosía – a type of perforated wall common in Mexican architecture.

“Just rearranging this industrially produced concrete tile creates a kind of weave that will let the sun and the light come in,” she explains.

“This is very common in Mexico because of the weather, but actually it works beautifully in the gardens because you can see the green filtering into the darker space that is the pavilion.” 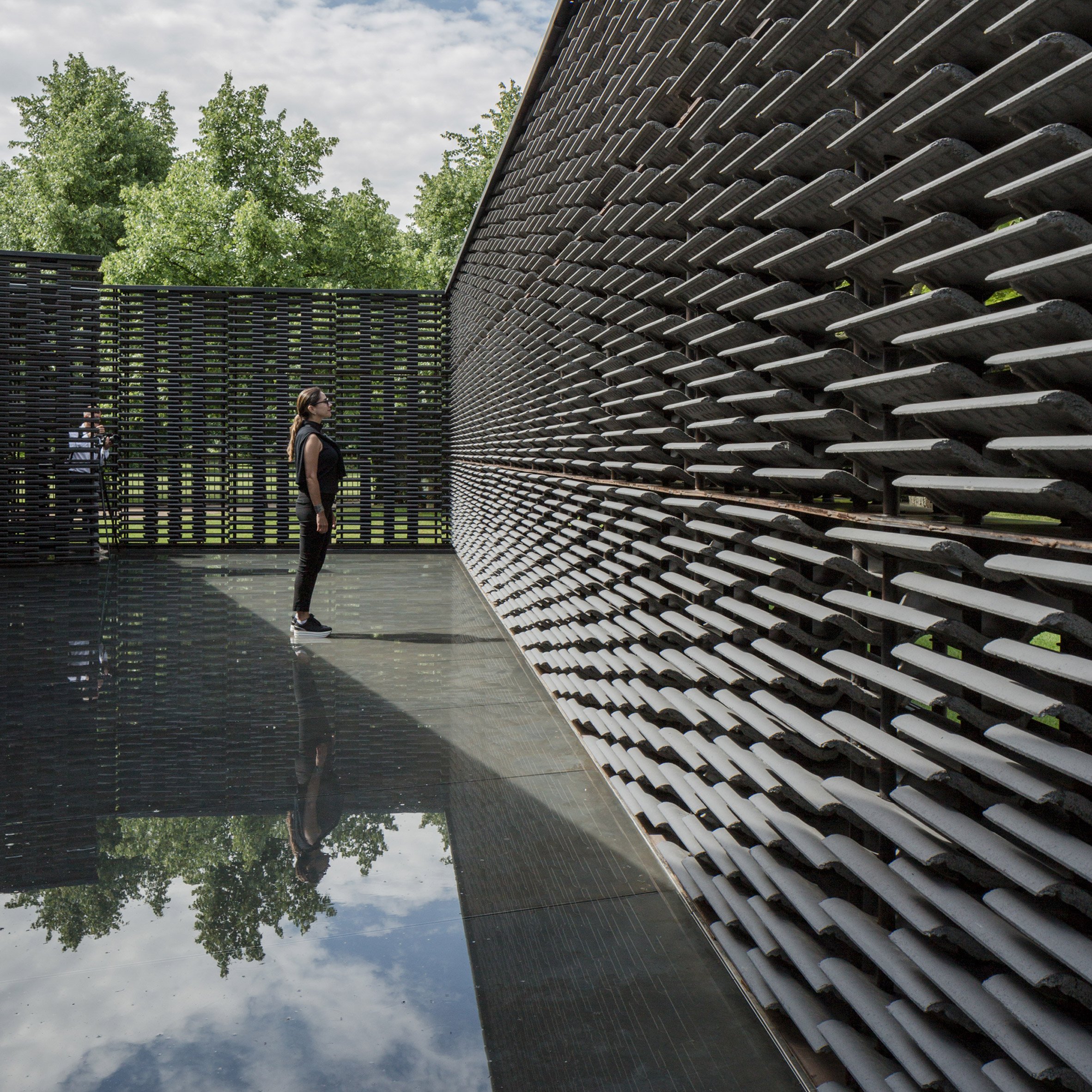 The courtyard features a triangular pool of water in one corner and is partially covered by a curving mirrored ceiling that creates distorted reflections of the walls and the people passing within them.

In plan, the pavilion comprises two overlapping rectangles. One of these runs parallel with the Serpentine Gallery behind, and the other runs parallel to the Prime Meridian, the longitudal axis established at nearby Greenwich, which is used to measure time all over the world.

Escobedo says that her intention was to create a structure that is not only site-specific to Kensington Gardens. The Serpentine Pavilion, which opens to the public on 15 June and will stay open throughout the summer until 7 October 2018, will eventually be moved to a new, as-yet-unknown location. 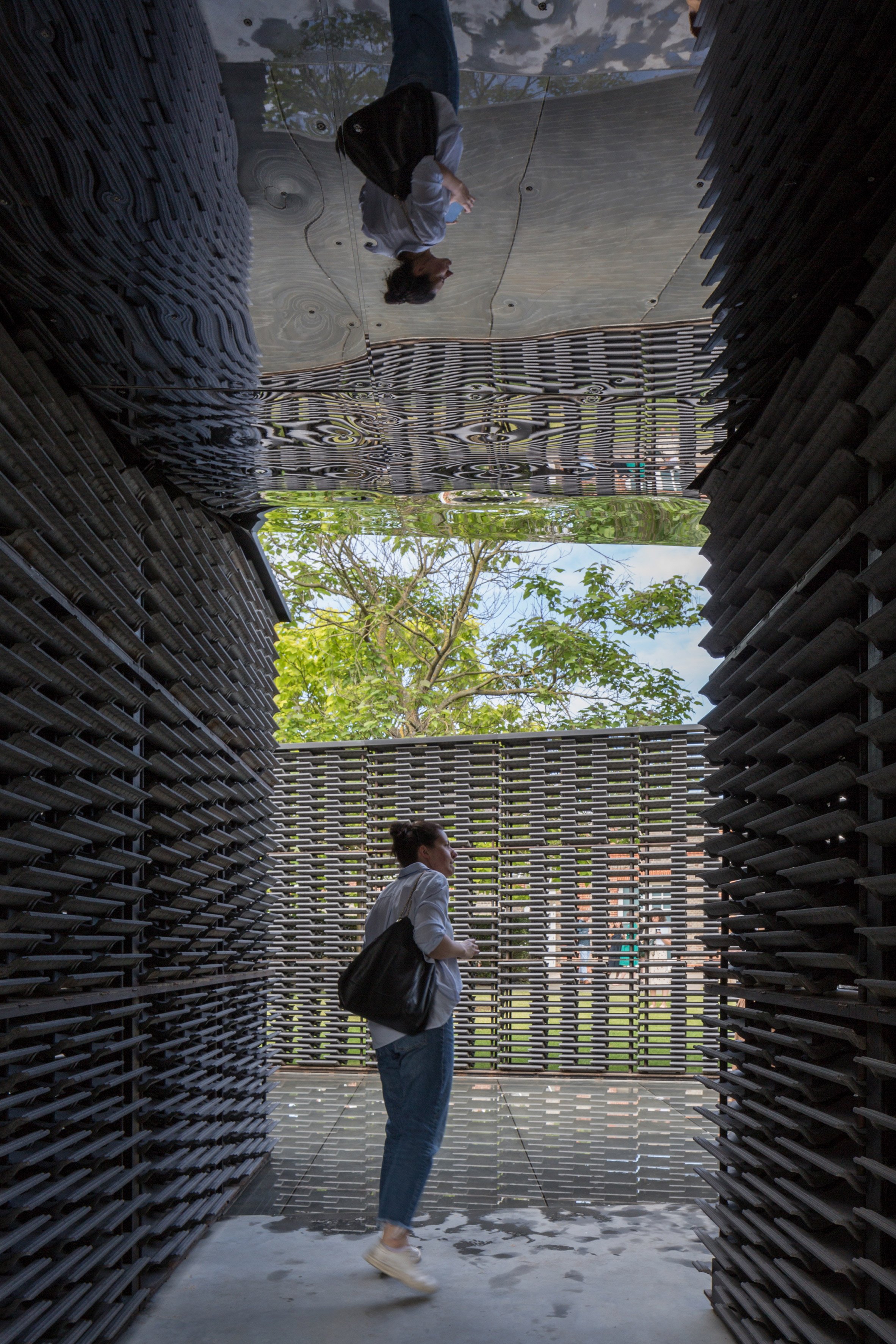 “The pavilion will be here in Hyde Park for just a few months, but then it finds a more permanent home somewhere else,” she says.

“With this in mind, we had to anchor it to the site, without having to be physically present in the site. The Greenwich Meridian became the solution to try to deal with that contradiction,” she continues.

“The basic geometry of the pavilion is this rectangular courtyard and within that courtyard you have a rotation of the four walls that are aligned to the Greenwich Meridian. So it will always have a reference to that line, even when it is moved to a different location.”

Escobedo is the 18th architect commissioned to design the Serpentine Pavilion in London, an annual commission by the Serpentine Gallery that offers architects the opportunity to complete their first building in the UK.

She is younger than any of her predecessors, which include Peter Zumthor and Bjarke Ingels, and is the first solo woman to lead the project since the inaugural pavilion designed by Zaha Hadid in 2000.

Escobedo’s previous projects include a gallery in the former home of painter David Alfaro Siqueiros and an Aztec-inspired installation at the V&A.

This movie was filmed by Dezeen at Kensington Gardens in London.

Photography is by Ste Murray, unless otherwise specified.

The post Serpentine Pavilion 2018 shows “what you can create with simple things” says Frida Escobedo appeared first on Dezeen.