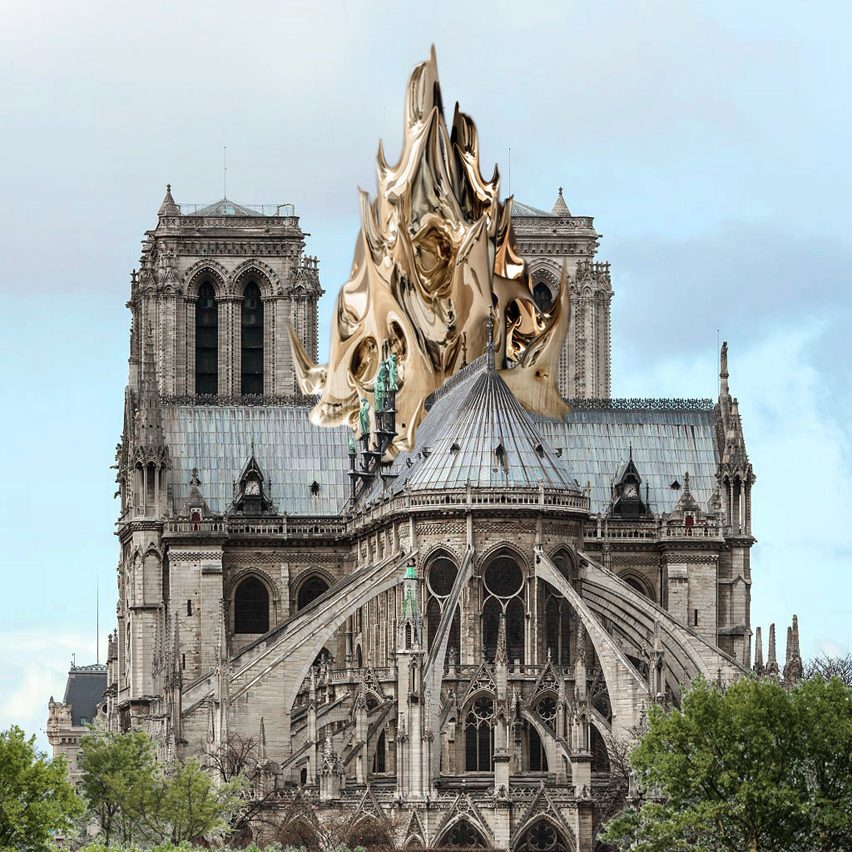 Since the fire devastated Notre-Dame Cathedral and the French prime minister announced a competition to replace its spire, a flurry of designers have offered alternative proposals. Here are seven of the best.

Italian architects Massimiliano and Doriana Fuksas have proposed adding a contemporary roof and spire made from Baccarat crystal to the cathedral, which would be lit up at night.

“A crystal spiral symbol of the fragility of history and spirituality. Light as a symbol of immateriality,” the studio told Dezeen.

French designer Mathieu Lehanneur proposes replacing the spire not with a replica of what was built 150 years ago, but what was there during the fire.

“In a provocative way, I proposed to rebuild the spire as it was, following the most conservative people, but as it was last week!” Lehanneur told Dezeen.

“I love this idea of a frozen moment in the history that can remains for centuries. The project is a monumental permanent flame covered with golden leaves. For me, it’s a way to capture the catastrophe and turn it into beauty, turning ephemeral into permanency.”

Bratislava based Vizumatelier’s proposal for the spire is a lightweight tower topped with a beam of light that will shine directly upward.

“In gothic times builders try to reach the sky. Viollet le Duc tried it also in the 19th century and came closer. Now it’s possible to make it happen,” said the studio.

Cyprus collaborative architectural studio Kiss The Architect has proposed rebuilding the spire with an eclectic mix of arches and balls wrapped around a central staircase.

The proposal is actually a rework of another concept by the studio, A Foolish Folly, placed on top of the cathedral.

“In gothic there is the connection of the earth to the sky, and inside the cathedral, the natural illumination multiplies in colours through the filter of the cover in stained glass,” explained Alexandre Fantozzi, creative partner at the studio.

“When people come to see the cathedral they will feel a powerful connection to the history seeing the ancient and the modern parts together,” explained Nerovnya.

French architect and artist David Deroo has created a design for “an idealistic representation of how Notre-Dame could be re-built”. The visualisation shows a modernised version of the roof and spire that retains much of the original’s forms.

“A middle ground should be reached between acknowledging the past and bringing the innovation of our time,” Deroo told Dezeen.