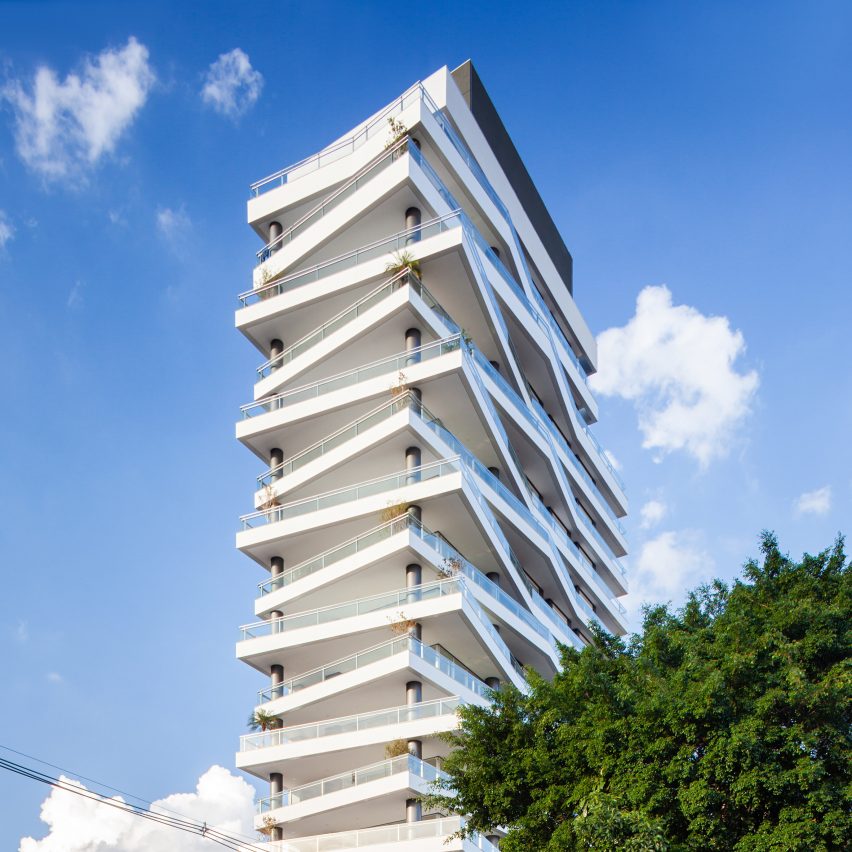 Brazilian studio Königsberger Vannucchi Arquitetura has completed a residential building in São Paulo with irregularly shaped terraces that look slanted from a distance.

Called MN15 Ibirapuera, the project’s design was influenced by the building’s proximity to the 158-hectare Ibirapuera Park – one of the largest urban parks in South America.

“To take advantage of the superb visuals, and to extend the green surface, bringing the park to the footsteps and facades of the apartments.”

The project was constructed on a 1,976-square-metre parcel of land surrounded by buildings in a range of heights, from high-rises to single-storey homes.

The team created a 17-storey, white, rectangular tower that is wrapped with irregularly shaped terraces that give the building a sculptural appearance.

Glass-lined balconies are recessed in some areas and jut outward in others, making them look sloped from a distance. Along one corner of the building, the terraces shift in different directions.

“The terraces’ rotation enhances the views toward the park, clearly establishing a relationship with the green mass,” the team said.

The apartment floor plans are designed to ensure the best views while providing a clear separation between the bedrooms and the main living space.

Natural ventilation and daylight are found throughout the units. The connection to the surrounding landscape is particularly strong in the living room, which has glazed doors that meet at a corner and open toward the terrace.

Communal spaces are located within a podium that features an open-air plaza with landscaping and a playground. The plaza was designed by Brazil’s Burle Marx Studio, which was started by the late landscape designer Robert Burle Marx.

The public areas include an event room, a spa, and a fitness area with a squash court. There also is a 25-metre indoor pool and an outdoor pool.

The building has several sustainable elements, including solar panels and plantings on certain roofs.

The team also preserved original vegetation was that existing on the site, which helps maintain a connection to the park.

Königsberger Vannucchi Arquitetura was started in 1971 by Jorge Königsberger and Gianfranco Vannucchi. Other projects by the firm include a pair of office towers in São Paulo that have an asymmetrical shape and balconies of different sizes.

Photography is by Pedro Vannucchi.