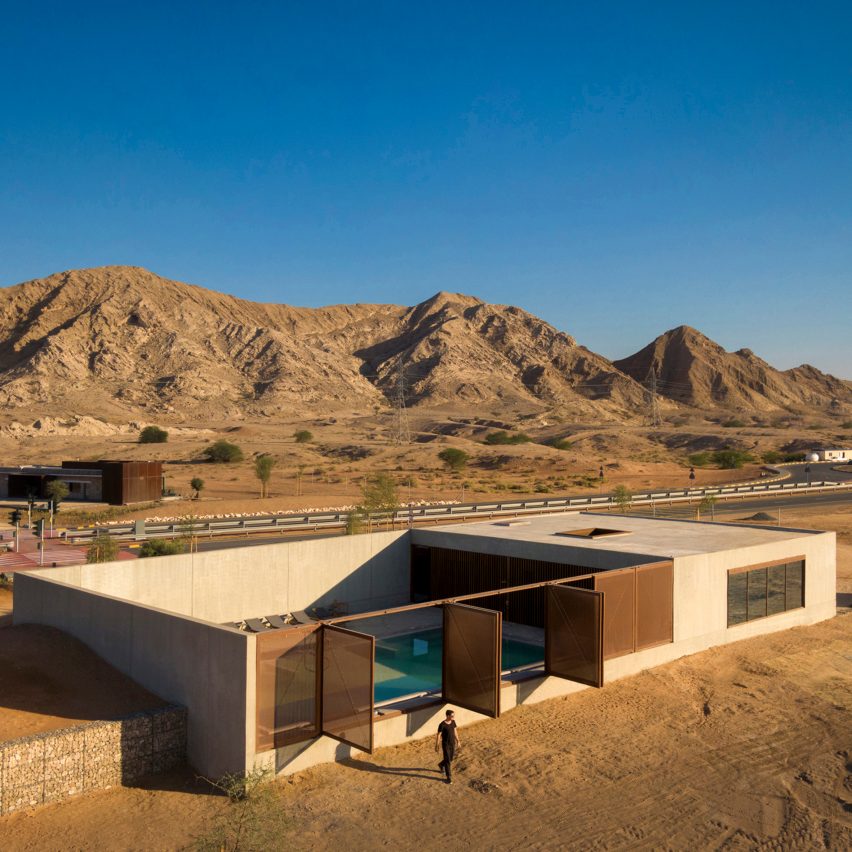 Al Faya Lodge and Al Bait Hotel offer hospitality that connects travellers with Sharjah dezeen‘s history says Khawla Al Hashimi, director of project development at Shurooq, in this video produced by Dezeen for the AHEAD Awards.

Shurooq, an investment and development firm based in the emirate of  Sharjah in the United Arab Emirates, is behind the desert hotel and spa Al Faya Lodge and urban renovation project Al Bait Hotel.

Both hotels were among the nominees at the AHEAD Middle East and Africa awards, which were held in Dubai in November 2019.

Al Faya Lodge, a hotel and saltwater spa set amongst the red sands of the Maliha desert east of Sharjah, was nominated in the awards programme’s Guestrooms and Renovation, Restoration and Conversion categories.

The hotel is a renovation of a petrol pumping site, where an abandoned cluster of buildings have been transformed into a five-room boutique hotel with a saltwater spa and open-air swimming pool by London-based studio Anarchitect. It is located close to the Jebel Buhais archaeological site, where Hopkins Architects recently completed a visitor centre.

According to Al Hashimi, the project aims to merge with and emphasise the surrounding landscape.

“We wanted to showcase the beauty of Maliha and give it another life,” says Al Hashimi in the video interview, which was shot by Dezeen on the judging day of the AHEAD MEA awards in Dubai.

“There are some areas where it’s literally blends into the landscape, so the pool section specifically is literally tucked into the sand dunes,” she continued. “We’ve given [the rooms] skylights so you can look up and enjoy a beautiful night stargazing.”

Al Hashimi sees Al Faya Lodge as an example of how buildings can be re-used instead of demolished.

“In the UAE we’re used to demolishing everything and building new somewhere else,” she said. “It’s a showcase of how we can bring depth to and enrich a project just by what it used to be.”

Also nominated in the Renovation, Restoration and Conversion category was Al Bait Sharjah, located in the city of Sharjah.

The project is a renovation of a group of historic homes situated next to a functioning souk, and is intended to connect travellers with Sharjah’s past.

“The main purpose of Al Bait is basically to showcase how people used to live,” said Al Hashimi. “Rather than make it into a museum, we wanted people to actually be able to sleep in a room and really experience it.”

“It’s really about taking you on a different journey, and that is the journey that you would only experience in Al Bait Hotel, in Sharjah.”

Al Hashimi stated that the design of both hotels was guided by a core principle of storytelling.

“For today’s age and today’s traveller, storytelling is everything,” she said. “These projects have really brought back some of the stories of Sharjah and some of the very rich heritage that we have.”

This video was produced by Dezeen for AHEAD. It was filmed at Bulgari Yacht Club in Dubai. Photography is courtesy of AHEAD and Shurooq.