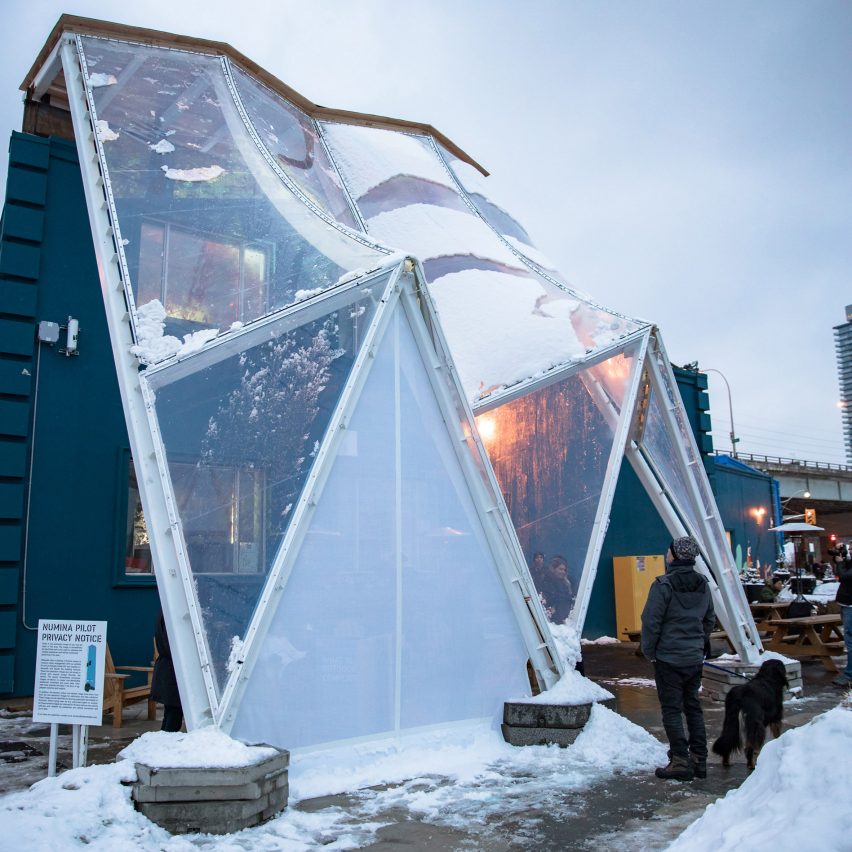 A “raincoat” designed to protect pavements during harsh weather is among a series of design prototypes that Alphabet company Sidewalk Labs has revealed for its new city in Toronto.

An awning, hexagonal pavers, and interactive works that use lighting and projection mapping are among the ideas developed for Sidewalk Toronto – the city that Alphabet subsidiary Sidewalk Labs is developing with partner Waterfront Toronto.

Revealed at an event earlier this month, the new prototypes are intended to respond to the harsh weather endured in the city’s winter months.

“It’s cold,” said Sidewalk Labs in a project description. “The weather plays a big role in determining how much time we spend outdoors.”

Among the designs is the Building Raincoat that Toronto architects Partisans has designed with British environmental engineering company RWDI and Italian firm Maffeis Engineering for structural design.

With much of the Sidewalk Toronto development intended to be wooden construction as part of its environmental and sustainable strategy – these adjustable and protective structure are intended to protection to the buildings, as well as pavements.

“The raincoat was just one of a series of design innovations we’d been exploring to make sidewalks and other public spaces more comfortable, with the goal of drawing people outdoors year-round,” said Sidewalk Labs.

The Building Raincoat is made from ethylene tetrafluoroethylene (ETFE) and is the first project in Ontario to use this emerging building material. Another recent design to use ETFE is ITT’s Kaplan Institute building in Illinois by John Ronan.

The awning is based on a series of peaks that extend outward from Sidewalk Labs’ Toronto office, called 307.

Sidewalk cast a series of light designs across the coverings to celebrate the presentation, which took place on 2 March 2019 at the Winter Warmer event.

Projections included artworks made at an earlier drawing session with Jason Logan of the Toronto Ink Company. Pieces were altered by British mixed-media artist Ilze Briede [Kavi] and projected onto it.

Also launched during the event was Sidewalk Lab’s hexagonal paving system, which were developed from concrete pavers that were tested in the parking lot of 307. The design follows the modular, fibreboard paving system that Sidewalk Lab created with Italian architect Carlo Ratti, and revealed last year.

The company developed the paving system to tackle environmental issues like flooding and icing. In addition to permeability, the tiles are also modular so can easily be replaced.

“Individual precast concrete slabs are easy to pick up and replace – eliminating disruptions from street work and helping the streetscape adapt as new technologies emerge or new community needs arise,” the organisation said.

Additional features include LED lights that can “signal changes in street use, making it easier to control traffic flows or direct people to take over street space for public uses, such as pop-up markets or temporary road closures”, said Sidewalk Labs.

Also at the event was Numina – a Brooklyn-based startup that uses computer sensors to gather date on the the street movements of pedestrians, cyclists, buses and trucks. The data is intended to be used to help plan for healthier and safer cities.

Winter Warmer was held at 307 – Sidewalk Labs’ Toronto office. Based in a former fishery, the office was overhauled by local studio Lebel & Bouliane.

The prototypes form part of a large initiative by Sidewalk Toronto to create a waterfront district in the city that is a hub for urban innovation.

First unveiled in 2017, the project aims to overhaul more than 325 hectares (803 acres) into a digital “future city” that will address many urban issues – like affordable housing, traffic congestion and safety, and environmental problems – with smart designs.

In an interview with Dezeen last year, Sidewalk Labs urban planner Rohit Aggarwala said the result could provide a model for cities to use the latest technologies.

Sidewalk Labs and Waterfront Toronto are currently working on developing a portion of this site – a 12-acre (9.5-hectare) Quayside neighbourhood at Parliament Slip, east of the city’s Downtown area. Thomas Heatherwick‘s studio and architecture firm Snøhetta were recently tapped for the project, revealing proposals for the smart, mass-timber city.