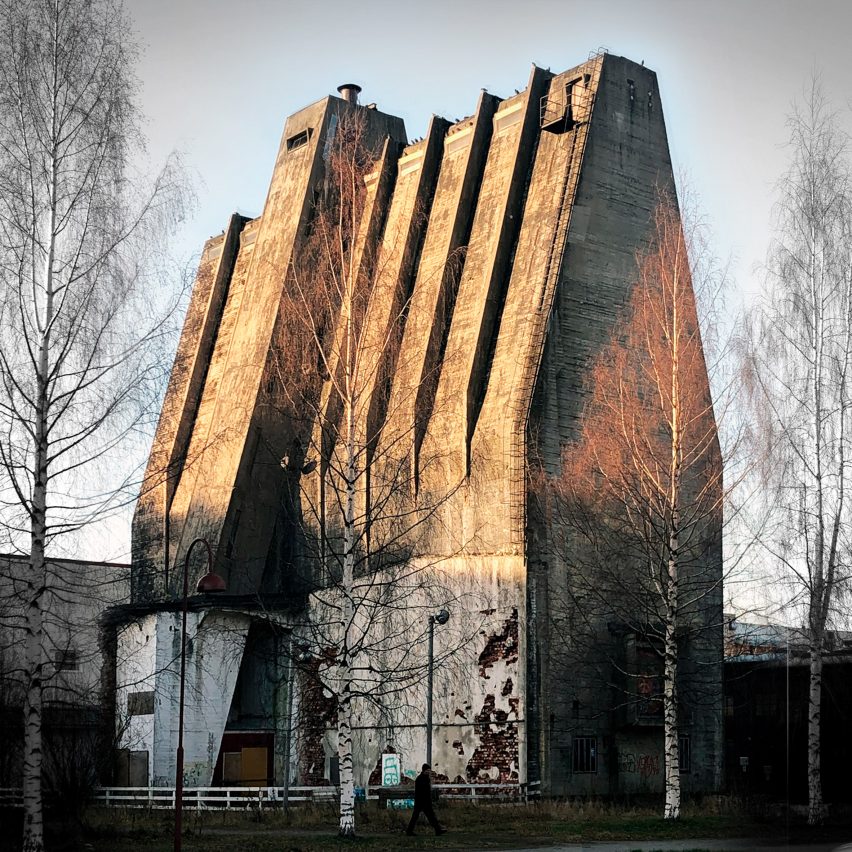 The studio and foundation recently purchased the silo, which was designed in 1931 for a cellulose plant in the Toppila district of Oulu, from the local city council.

They will now work together to turn the structure into the Aaltosiilo, while a research centre designed by Skene Catling de la Peña will be built alongside it.

The structure has sat empty since the plant closed in the mid-1980s, and after its own attempts to revitalise the structure, the council sold the silo to ensure its future.

“Despite years of trying to fund and use the silo, the Oulu City Council decided to sell in the hope that someone would save the building,” Factum Foundation‘s director of communications, media, content and digital Nicolas Béliard told Dezeen.

“There was concern it needed to be demolished,” he added. “The experimental concrete structure from 1931 was considered too important to lose.”

“The aim will be to change the building as little as possible while rethinking the flow and use of the building,” Béliard said.

“The aim is to create a coherent, multi-functional space that can be used for concerts, exhibitions, experimentation, and diverse activities exciting and encouraging curiosity while serving local needs.”

‘It is radical, innovative and beautiful”

Originally designed to store wood chips, the 28-metre high silo was one of the Aaltos earliest industrial works and helped define the architects’ future architecture.

“As a piece of architecture and engineering, it is radical, innovative and beautiful,” Béliard said.

“The steel hoppers that held wood chips are suspended from the ring beams by flexible articulated joints; it was here that Aalto’s ‘organic approach to architecture emerged for the first time.”

Alongside the revamped silo, a research centre designed by Skene Catling de la Peña will be built on the site that used to contain wood chipping machines.

Created in collaboration with Oulu Universit, the construction of the research centre will be used to explore new forms of “green” concrete, “self-healing” concretes and other eco-friendly and experimental materials.

The project began in August 2020 when Charlotte Skene Catling saw an Instagram post from the Brutalism Appreciation Society announcing that the silo would be auctioned off.

“Factum Foundation and Skene Catling de la Peña put €250 on top of the standing €6,000 bid, and in November, after detailed discussions with Oulu Council about their approach, they found themselves the new owners,” the foundation said.

The organisations are currently raising funds to start work on the building.

Thirteen Alvar Aalto sites in Finland have been proposed for the UNESCO World Heritage List, including the Sunila Pulp Mill and residential area. The Sunila Pulp Mill also had an Aalto-designed silo – created after the Toppila silo – which has been demolished.

Aalto is also the subject of a recent Finnish feature film, and his and Aino’s Savoy restaurant in Helsinki was revamped in 2020 by designer Ilse Crawford in collaboration with the Artek brand, which the couple helped co-found.