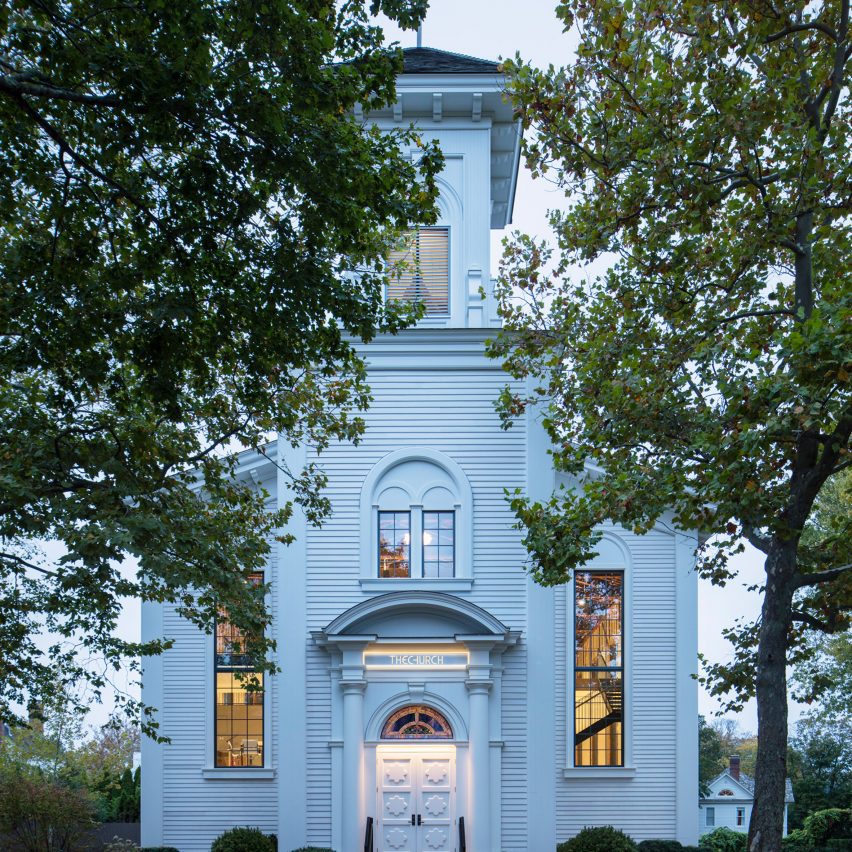 Tall windows and timber framing feature in this 1830s church building in New York, which has been converted into a cultural facility by Skolnick Architecture and Design Partnership.

The Church is located in Sag Harbor, a former whaling village that spans the towns of East Hampton and Southampton on Long Island.

The original building, which dates to 1836, housed the Methodist Church of Sag Harbor until 2008 when the congregation moved to a new home.

After several proposals for the building fell through, the property was purchased by the married artists Eric Fischl and April Gornik, who have lived in the area for decades.

They set out to transform the building into a community arts centre with living quarters for an artist-in-residence – and they hired the New York firm Skolnick Architecture and Design Partnership to oversee the adaptive reuse project.

The design team, working closely with the clients, devised a renovation plan that preserves many of the building’s historical elements. The original design draws from a range of styles, including Italianate and Greek Revival.

“Our approach recognises the rich history of the facility, while celebrating contemporary interventions that facilitate a transcendence of typology,” the team said.

Roughly rectangular in plan, the building has three levels and encompasses 12,000 square feet (1,115 square metres). The exterior was largely restored to the original specifications.

The building has a stone base, while its upper portion is a timber-framed structure with facades wrapped in white clapboard siding.

A gabled roof covers the bulk of the building. The entrance elevation features a restored belfry, including the original bell.

In the rear of the facility, the team constructed a modest, cube-shaped addition that will eventually be covered in vines. The two-storey extension holds living quarters for resident artists.

Inside the converted church, one finds bright spaces and a fluid layout.

Upon entering, visitors encounter a lofty foyer with a wide staircase leading up to the middle level. Suspended overhead is a circular chandelier with a wreath-like appearance.

The middle level formerly held a sanctuary and now serves as a vast space for exhibitions and events.

The double-height room is surrounded by walls with exposed timber columns and beams, establishing “a compelling dialogue between past and present”. The wooden roof structure was also left exposed.

Tall, glazed apertures usher in daylight and offer a connection to the surrounding neighbourhood. Mounted within the windows are portraits of notable local artists that were painted by the client, Fischl, and transferred to translucent film.

“They present themselves as a modern interpretation of traditional stained-glass windows,” the team said.

The exhibition space is ringed on three sides by a mezzanine clad in pale white oak. On the east side of the mezzanine, just below the bell tower, the team created a cosy library with built-in shelving and a custom-built wooden study table.

In photographs, the building’s ground storey reads like a basement, owing to its lower ceiling and 22-inch-thick (56-centimetre) masonry walls.

This level holds an open-plan maker space and studio, along with the bottom level of the residential extension. A south-facing door leads to a sunken terrace and public garden.

“Window and door openings around the perimeter bring ample light into the space, highlighting the richness and texture of the natural materials,” the team said.

The three levels of the building are connected by a glass elevator, which serves as a counterpoint to “the rustic qualities found in the original wood framing”. Various staircases also connect the different levels.

Deconsecrated churches have become popular venues for adaptive reuse. Other conversions include a church building in Los Angeles that has become a co-working and event space, a 1960s church in Quebec that has become a modern library, and a Methodist church in London that now serves as a minimalist home.