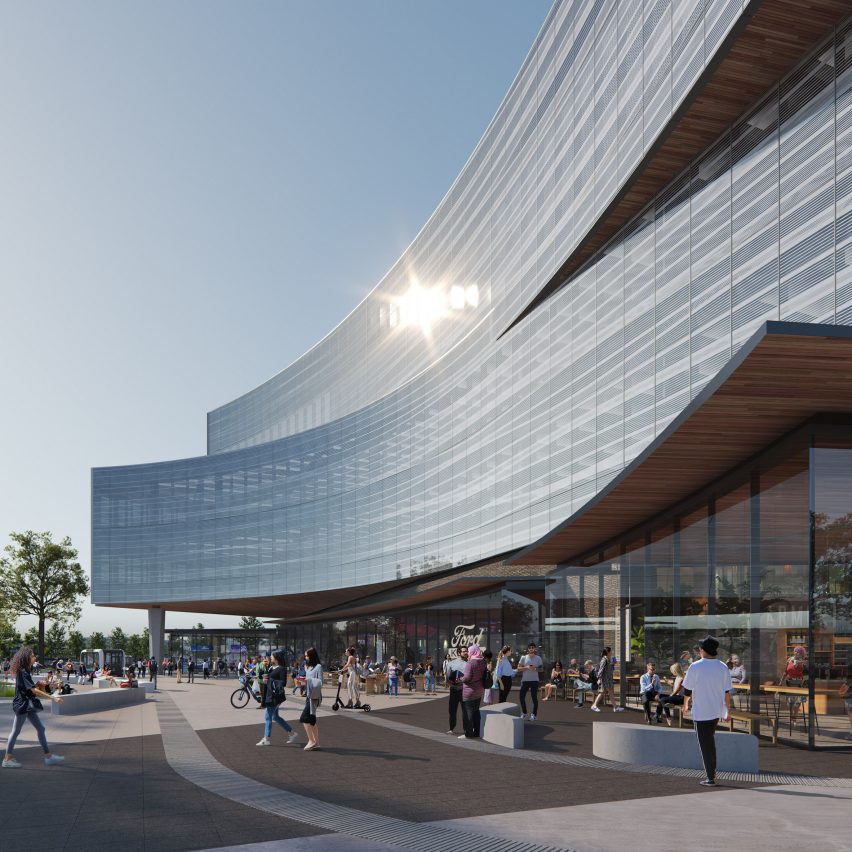 Called Central Campus Building, the new development is an extension of Ford‘s existing Research & Engineering (R&E) Campus in the city of Dearborn, where the company has its headquarters.

The building is designed to provide employees with a space to come together and exchange ideas during a time when working from home is increasingly commonplace due to the coronavirus pandemic.

Central Campus Building is part of Snøhetta‘s overall master plan for Ford’s R&E Campus, which sets out to expand Ford’s facilities through the creation of a series of buildings interconnected by gardens and courtyards.

“Recognising the link between mental wellbeing and access to the natural world, workplace areas are characterised by strong indoor-outdoor relationships,” explained Snøhetta.

Central Campus Building will be a workplace for around 6,400 staff.

It was designed to combine an array of professional amenities including offices, design studios, laboratories and fabrication shops to encourage interactions between Ford’s different teams.

“Based on a simple plan with interstitial courtyards, the building will create connections across floors, opening to daylight and minimising travel distances while connecting employees together,” said Snøhetta.

The architecture firm explained how the spacious building is designed to have floors of different sizes to allow Ford teams to expand and contract in size depending on where they work within the building.

Central Campus Building will also play a key role in opening Ford’s R&E Campus to the public as the building will be opposite the Henry Ford Museum and Greenfield Village, two notable landmarks within the campus.

Snøhetta is an architecture and interior design studio founded in 1989 by Kjetil Trædal Thorsen and Craig Edward Dykers. Recent projects by the firm include a sky-facing auditorium extension added to Kon-Tiki Museum in Oslo and a fashion store informed by space travel and race cars.

Renderings are courtesy of Snøhetta, Plomp and Methanoia.

The post Snøhetta designs research facility for Ford on its Dearborn campus appeared first on Dezeen.