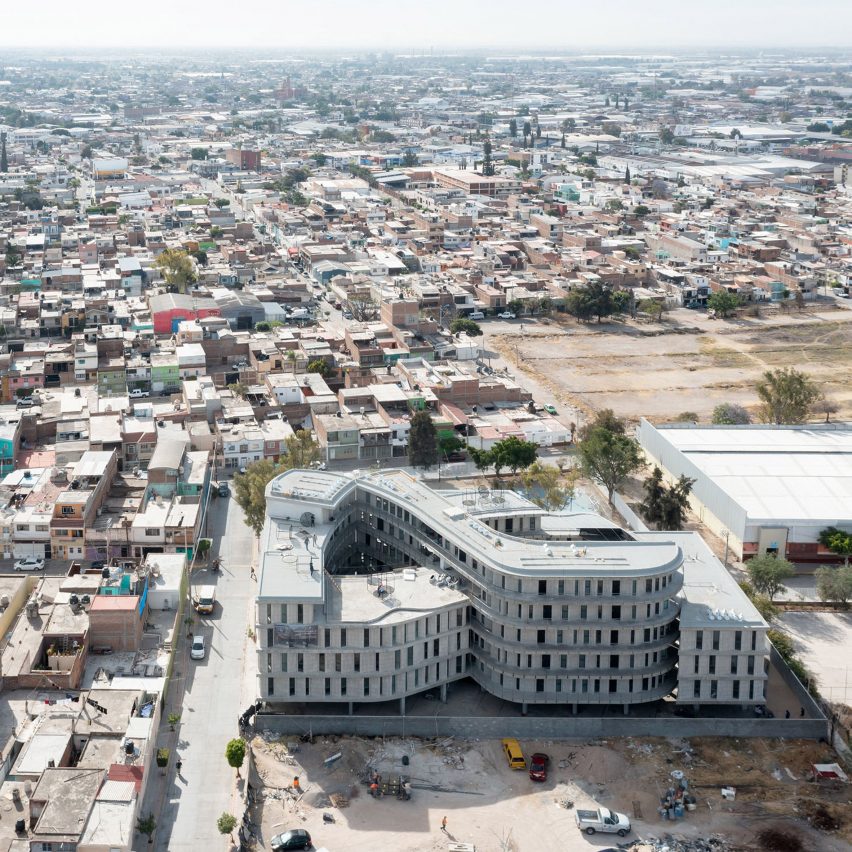 The project, called Las Americas, is a six-storey concrete block of homes divided into 60 apartments.

At the base of the block, there are two units reserved for community use and future commercial activity, as well as access to parking.

The development is intended as a prototype to address current housing issues in many parts of Mexico, where individual homes are built far apart from each other, making commuting into city centres difficult for residents.

“Low-rise and high-density is the way to go for housing, allowing people to live close to services and infrastructure,” SO-IL co-founder Florian Idenburg told Dezeen.

“The challenge was to make high-density pleasant. We believe this project does that,” continued Idenburg.

Las Americas focuses on urban regeneration of inner-city León, making use of an existing urban area rather than building on the city’s outskirts where amenities are limited.

The firm’s objective was to create a large number of homes that appealed to their residents as much as traditional spaced-out dwellings.

SO-IL incorporated a sense of privacy into the development’s design, so no two units face one another. With courtyard and neighbourhood views, each apartment is given a sense of private homeownership.

Due to the project’s limited budget, Las Americas has shared utility cores and is built from prefabricated components.

Reflecting on the project, Idenburg acknowledged what SO-IL has learnt from completing the housing development.

“The most important lesson for us was to have faith in the process, without being set on an outcome. As architects we make plans, but we should not be afraid to adjust.”

Idenburg also considered how the concrete bricks SO-IL developed for Las Americas shaped ways that the firm thinks about material and labour practices.

“We were able to include many more people in the construction process. Every block can be carried by a single person, so in some ways, you can see the human hand in the wall.”

SO-IL is currently constructing another building project in Brooklyn, New York, which takes cues from Las Americas’ exterior circulation and the relationship between inside and outside spaces.

C0-founded in 2008 by Florian Idenburg and Jing Liu, SO-IL has completed many projects focusing on improving urban environments, such as an interactive installation at an Atlanta art museum made from net hammocks and bird feeders, and a flower-shaped prefabricated house for Los Angeles.