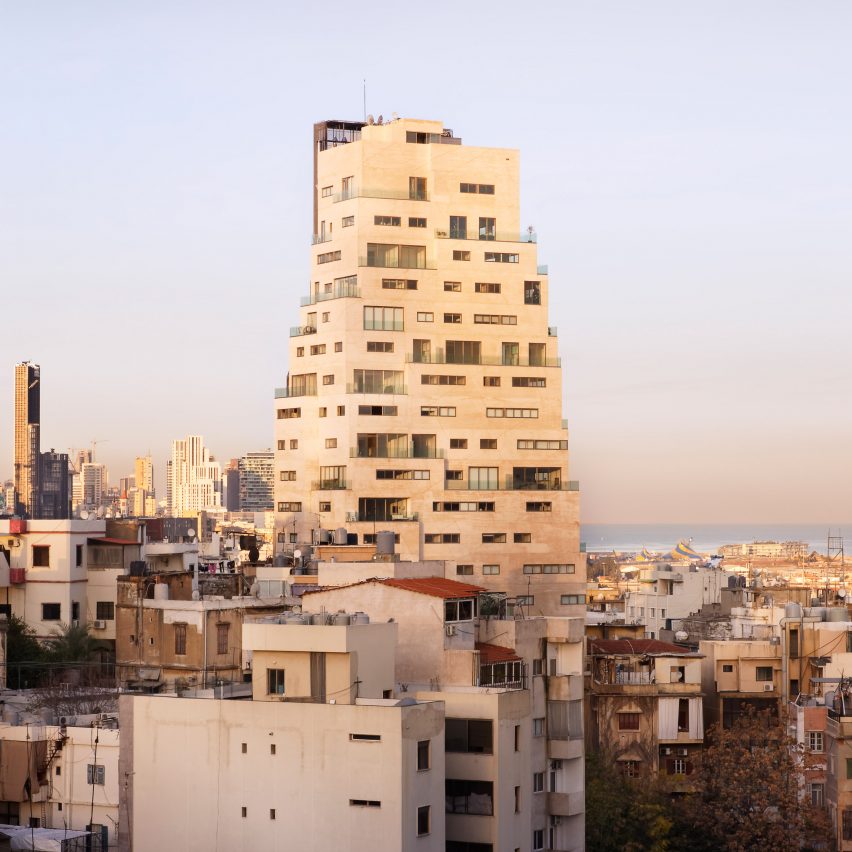 SOA Architectes looked to traditional Arabian houses when designing this contemporary tower in Beirut, which has been completed in spite of the huge explosion that hit the city.

The 21-storey, mixed-use Aya Tower is located in the Mar Mikhael area, just over a mile away from the epicentre of the port explosion, which devastated many buildings in the Lebanese capital in August 2020.

It contains apartments based on archetypal Arabian houses, with thick walls to provide natural insulation. All homes also have their own balcony terraces, which are staggered across the facade to offer uninterrupted views of the sky.

It’s possible that this architectural approach helped to protect the tower from damage in the explosion. It only suffered minor damage, mainly to windows and railings, so most of the repairs could be completed quickly.

“The building was not designed to resist this kind of shock,” said Augustin Rosenstiehl, partner at Paris-based SOA Architectes.

“Nonetheless, its architectural concept based on massive walls certainly improved its stability, despite its proximity from the blast point,” he told Dezeen.

The building is divided into three sections. The ground floor contains shops, while the four floors immediately above provide office space. There are then 16 residential storeys, containing a total of 45 apartments.

The different uses of the building are suggested by the building’s street-level facade. Part of the previous building on the site has been retained, which helps to ground the tower into its context.

While the original building has an art deco style, SOA Architectes felt it was more appropriate for the rest of the tower to take on a different character.

“Ancient Arab architectural principles have driven our conception for this building all along,” said Rosenstiehl.

“The typical buildings in this neighbourhood are art-deco style buildings from the French mandate, which are beautiful but inappropriate to be transformed in the scale that was expected by the client,” he added.

“That is why the ‘typical’ was the main question for us.”

SOA Architectes chose a pale concrete for the building’s facade, which helps to lighten its appearance.

The staggered balconies are organised over three facades, facing either north towards the sea, east towards the mountains or south across the city. The setback created by these balconies helps to animate the surfaces, creating subtle patterns of light and shadow.

Inside, the apartments come in a mix of sizes. However there are no penthouses, to promote “a common texture for everybody”, said Rosenstiehl.

The room layout is based on Arabic traditions from across Qatar and Morocco, as well as Lebanon. The main living spaces are organised as a triptyque, with the iwan (vaulted room) in the middle, the majlis (reception room) on one side, and the patio on the other.

On the lower levels, the building is organised around a courtyard plaza, which helps light to penetrate the commercial spaces.

Architects including Norman Foster and Tatiana Bilbao donated drawings and artworks for an auction last year to raise funds to help rebuild the city.

Photography is by Camille Gharbi.