New Orleans firm Trahan Architects has completed a visitor centre for an 18th-century plantation in Louisiana, using translucent glazing to blur views of occupants from the outside “like an impressionist painting”. 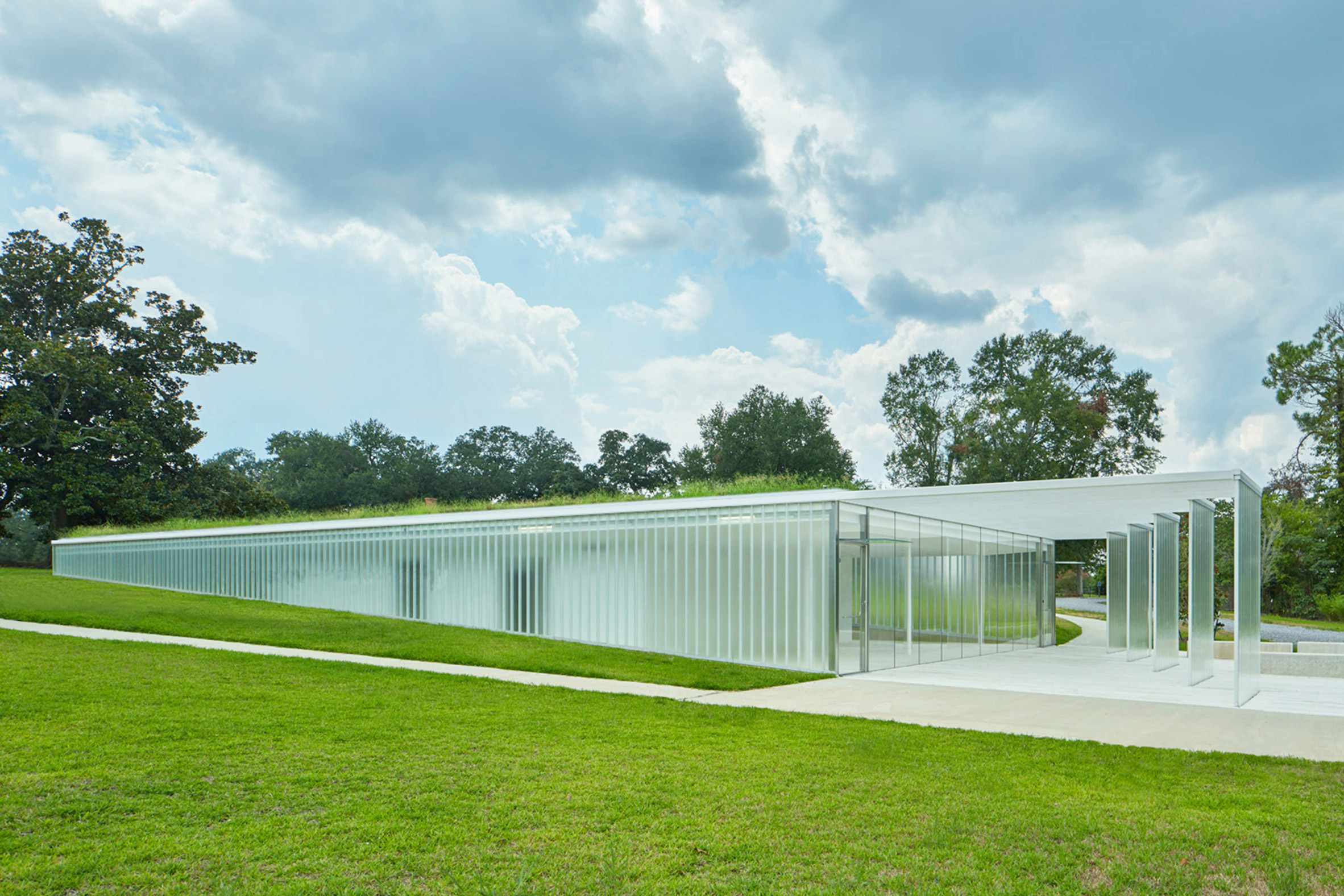 Trahan Architects‘ building provides a gift shop, and exhibition and events space for the Magnolia Mound Plantation House – located in Baton Rouge, near the Mississippi River.

The house was completed in 1791 in the Creole architecture style that dominated the area at the time as a result of French colonisation. It was listed National Register of Historic Places in 1972 due to its significance. 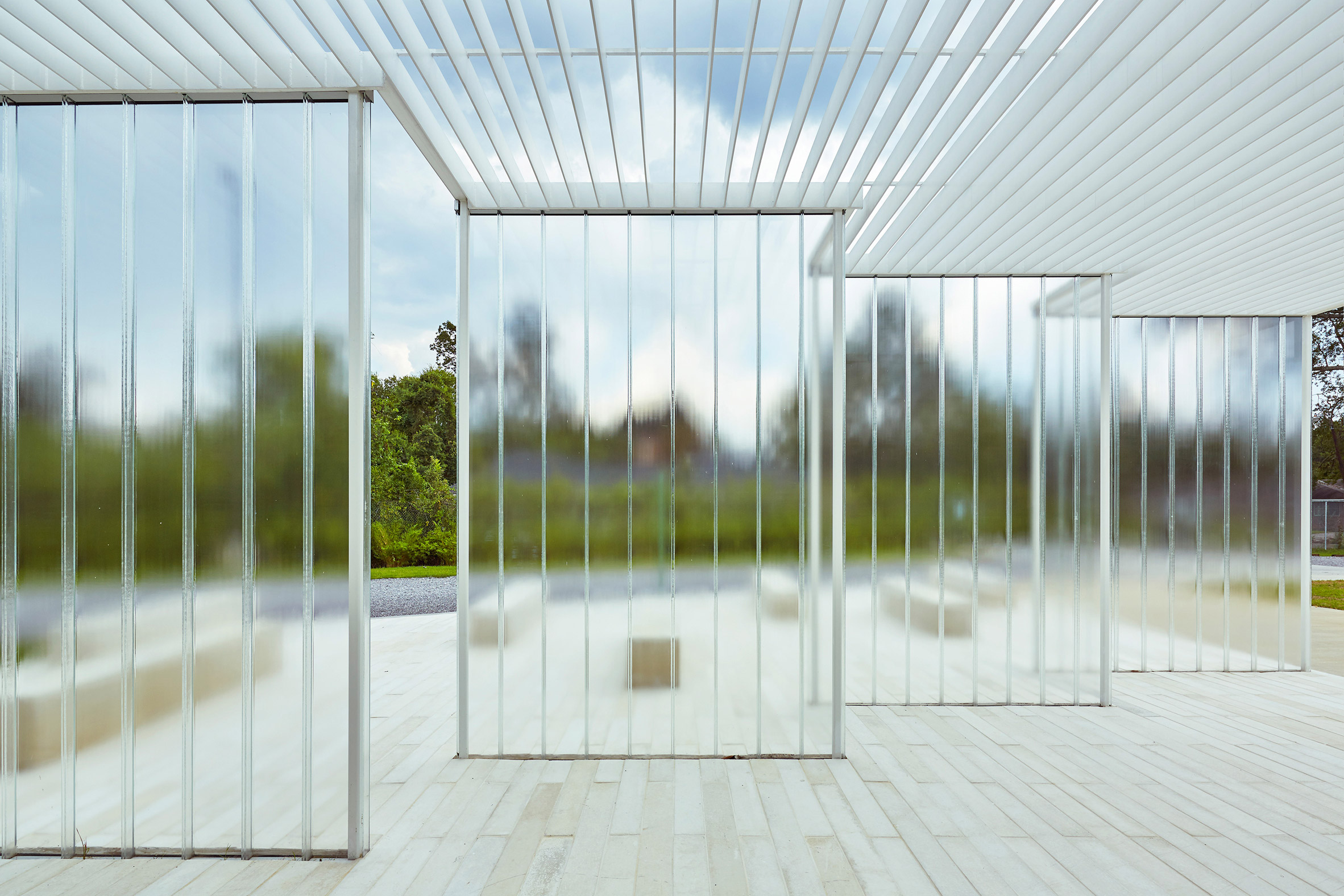 The Creole cottage once sat among 950 acres (384 hectares) of grounds that functioned as plantation for coffee, sugar and tobacco between the late 18th and 19th centuries. Reports claim that up to 79 slaves worked on the site by 1860.

The city of Baton Rouge Since purchased Magnolia Mound Plantation House and its surroundings – at the time down to 16 acres (6.5 hectares) – in 1966, and preserved the site to offer insights into life during this period. 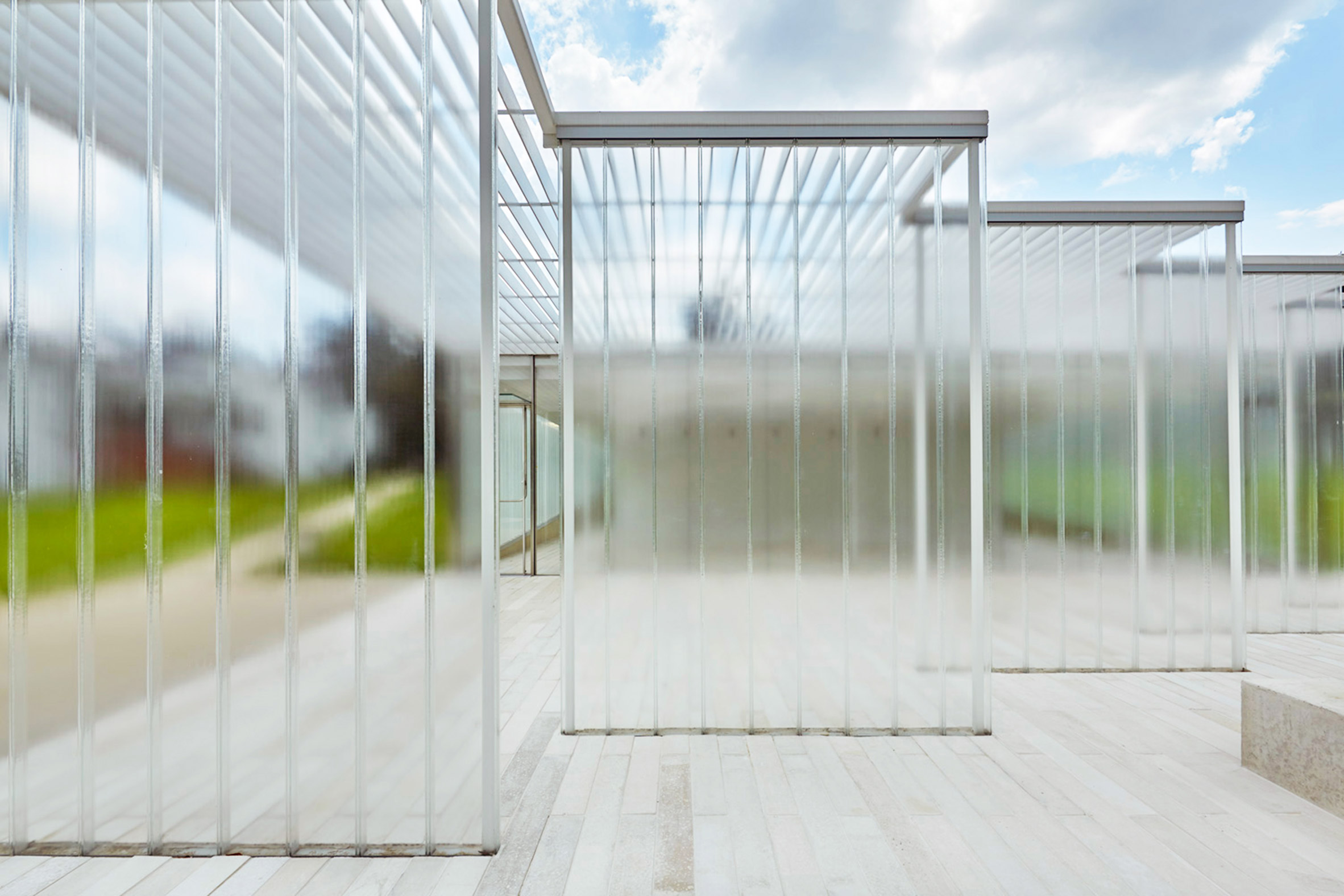 Trahan Architects‘ one-storey visitor centre forms the latest addition and was completed in 2013. Embedded into a hill at the base of the site, it is designed to make as little impact on the surroundings as possible.

Translucent glass walls protrude from the slope, while its roof meets the crest and is covered in grass to continue the pathway up the green hill. 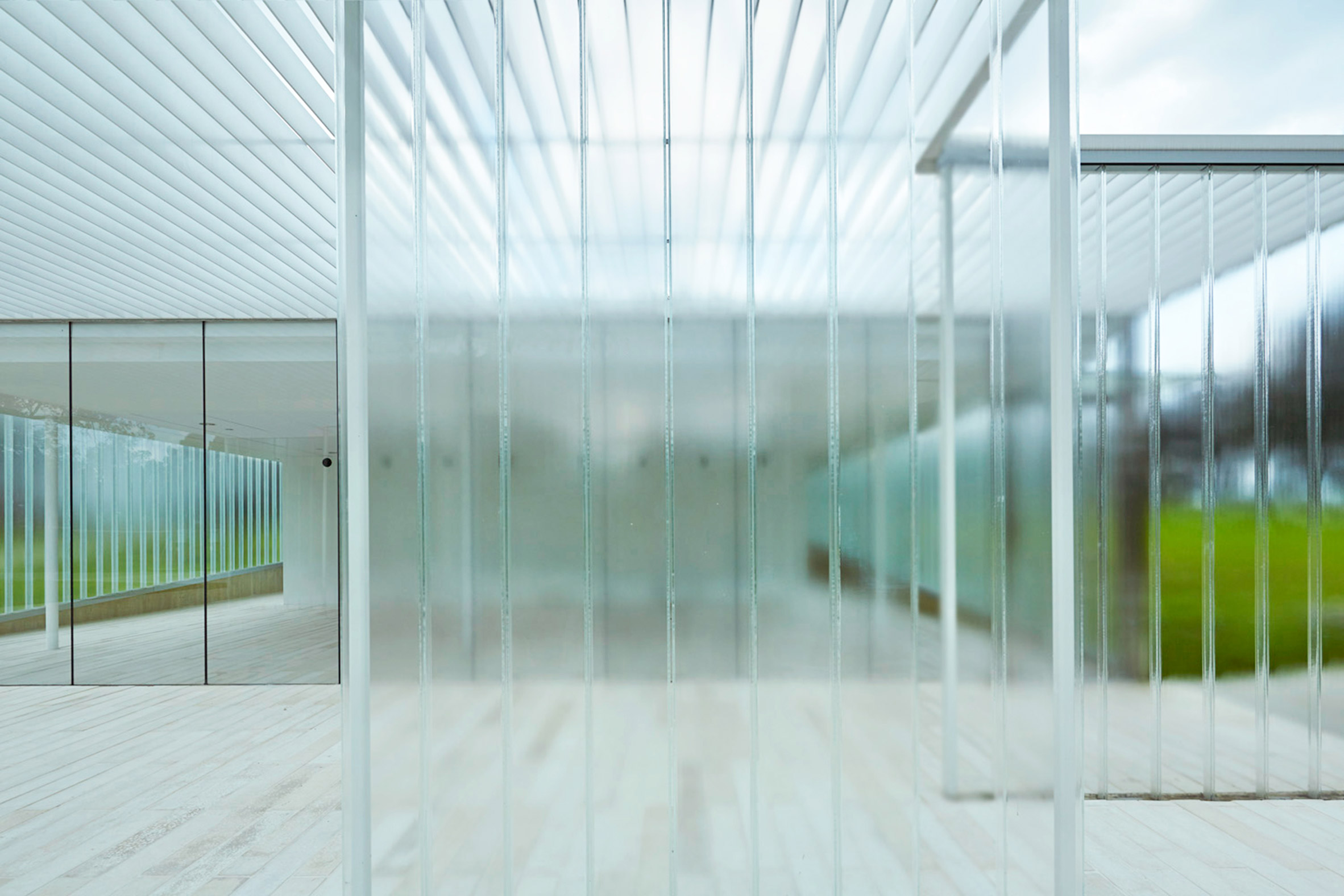 “The minimal intervention seeks to elevate the existing historic buildings and site by establishing a clear threshold for visitors as they circulate around the base of the mound,” said the studio.

“As one transitions through the new visitor center and ascends to the top of the mound, the building merges with the landscape to become unobtrusive and imperceptible.”

Along the front of the pavilion, the roof extends out to reach five staggered glass panels. These create a buffer between a terrace with stone benches and the entrance.

“Translucent channel glass was selected to subtly obscure occupants within and around the new building like an impressionist painting – blurring the distinction between new and old, building and landscape,” Trahan Architects said. 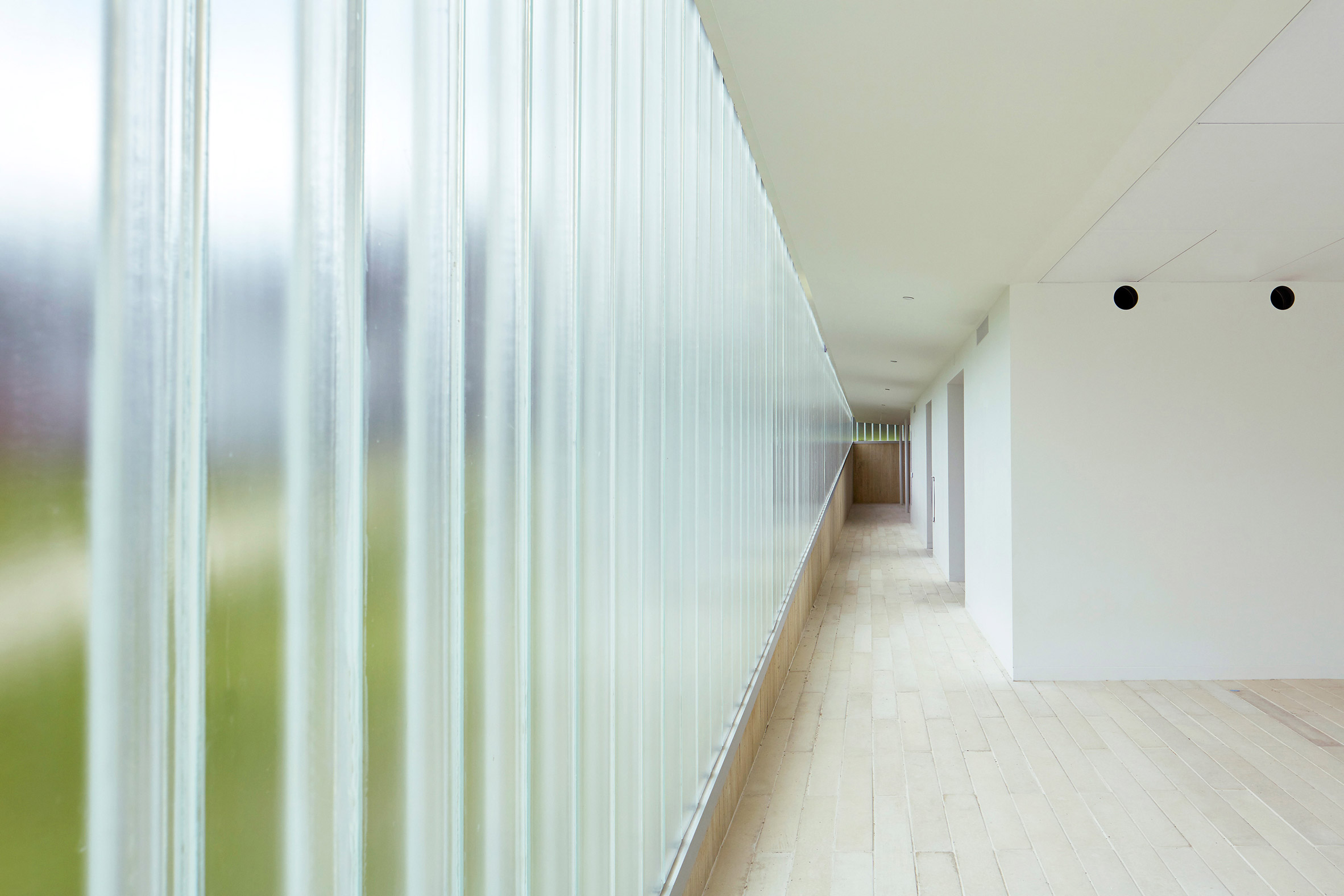 Behind the clouded screens, a transparent glass partition offers clearer views into the gift shop.

Inside, a central white volume contains administration facilities and toilets. A narrow pathway runs alongside to lead to the multipurpose room for various activities and the exhibition space, which both occupy the rear of the building.

The architects also looked to the work of famous American minimalist artists Donald Judd and Sol Lewitt to design a series of solid white aluminium units, which provide display cabinets and storage units for the shop. The pared-back aesthetic is completed with pale stone flooring.

Trahan Architects was founded by Louisiana native Trey Trahan in 1992 and has offices in New Orleans, New York and Chicago.

Its previous projects include a museum in Louisiana city Natchitoches, featuring an undulating interior formed of over a thousand cast stone panels.

Photography is by Timothy Hursley, unless stated otherwise. Video is by Spirit of Space. 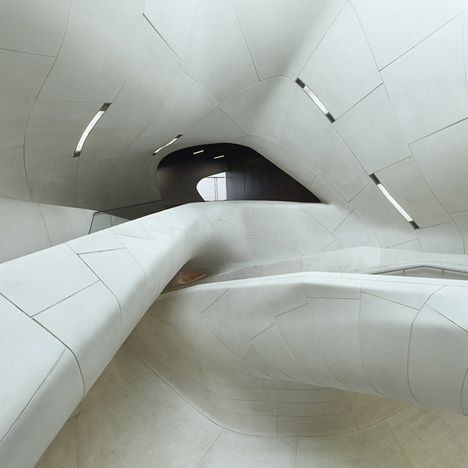