A trio of shipping containers has been converted into a weekend retreat set on stilts on a hillside overlooking Australia’s Otway Coast by Melbourne practice Studio Edwards. 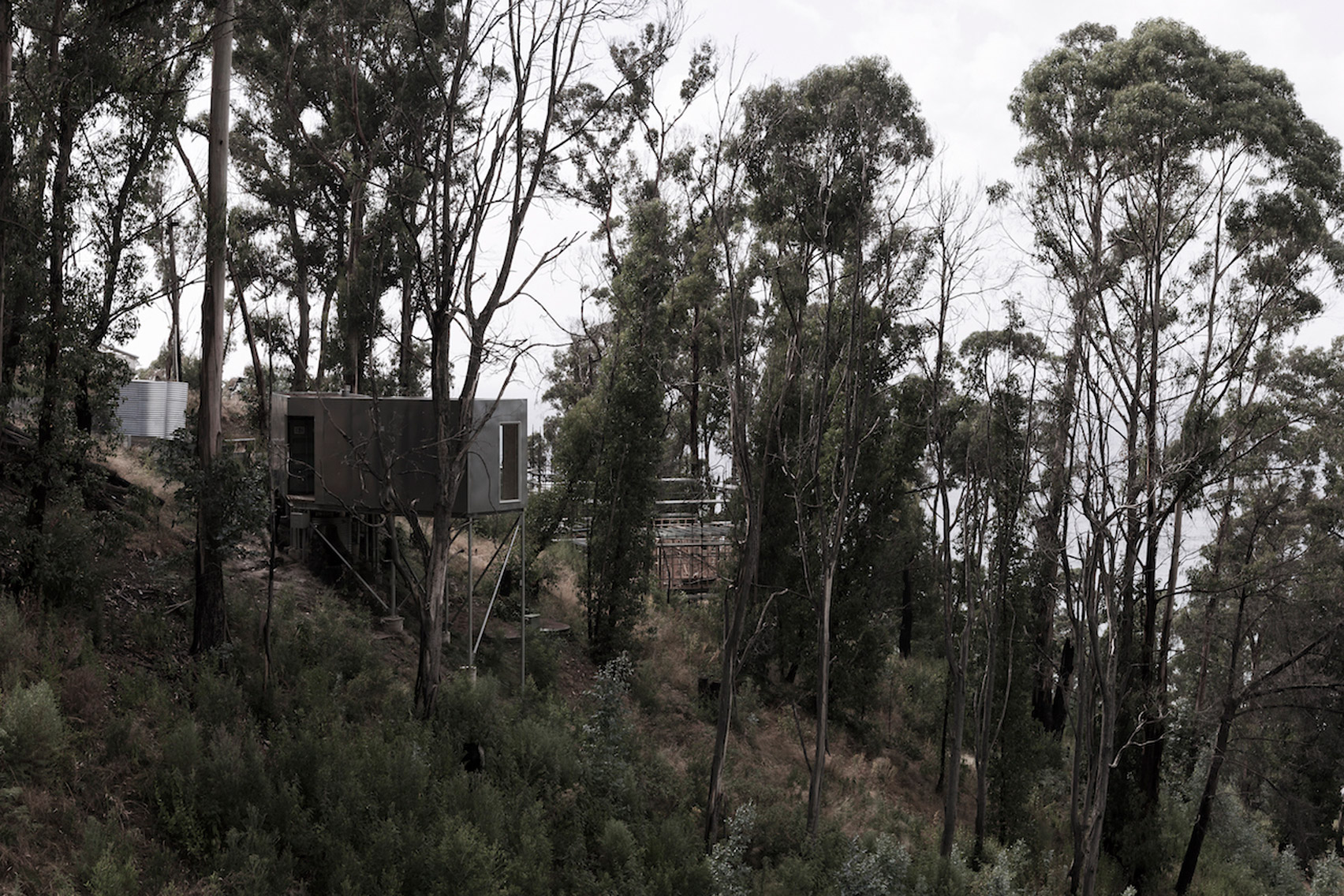 The residence named House 28 is located on the edge of Wye River, a town that has grown up along a waterway that feeds into the sea on the Victorian coast.

While its population is small, during the summer Wye River becomes a popular holiday destination thanks to the popular Great Ocean Road route that passes by.

Coming across an empty spot of land, Studio Edwards drew up plans to create a sustainable holiday home that would make minimal impact on the existing trees and vegetation. 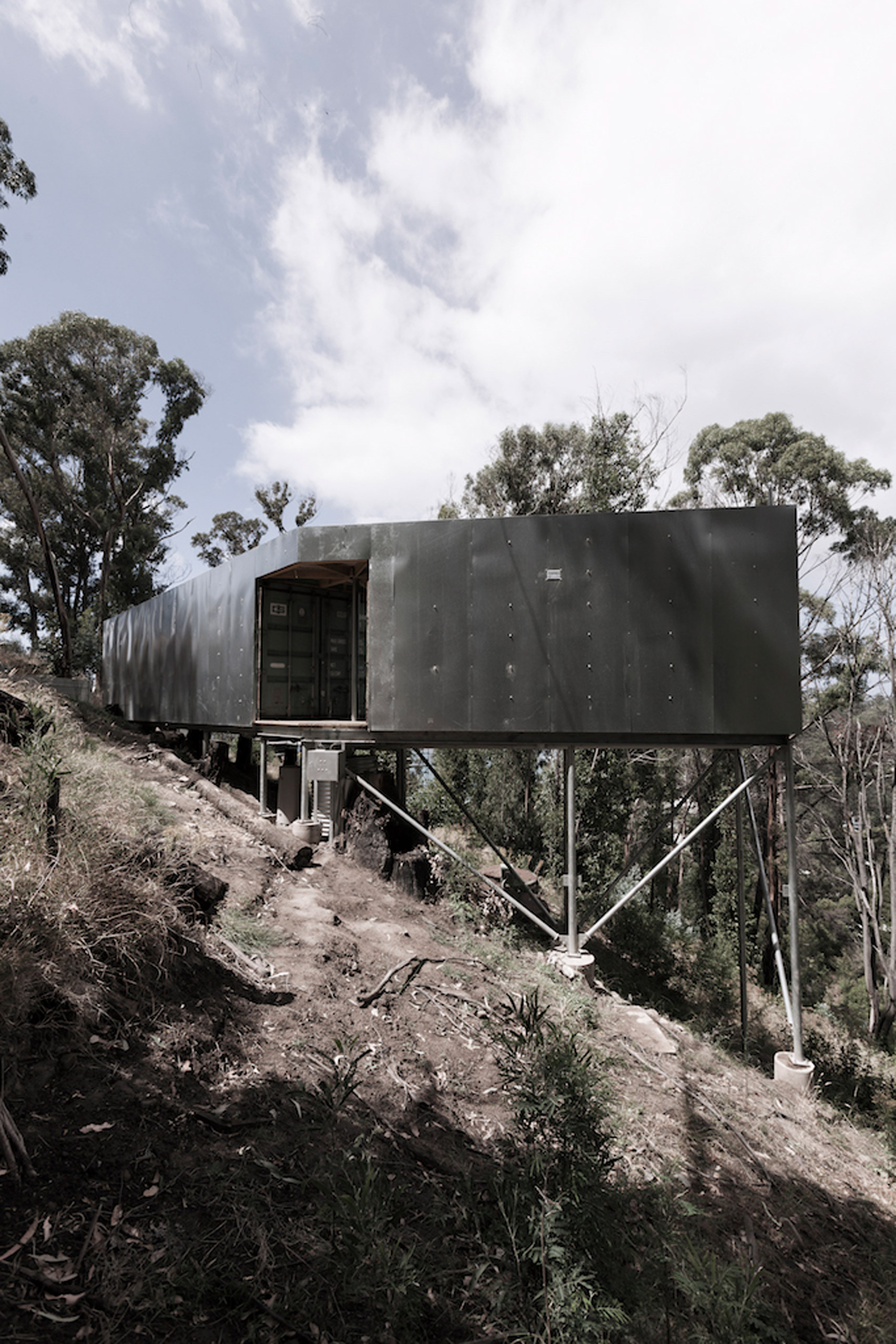 The practice ultimately decided to build the property from three 6-metre-long shipping containers sourced from a nearby port.

Clad with sheets of galvanised steel, two of the containers merge to form a living area while the third contains two bedrooms, a toilet and shower.

“They were chosen as an efficient way to build on this steeply sloping site, and were sourced from the nearby Port Melbourne where many shipping containers arrive from overseas,” explained Edwards. 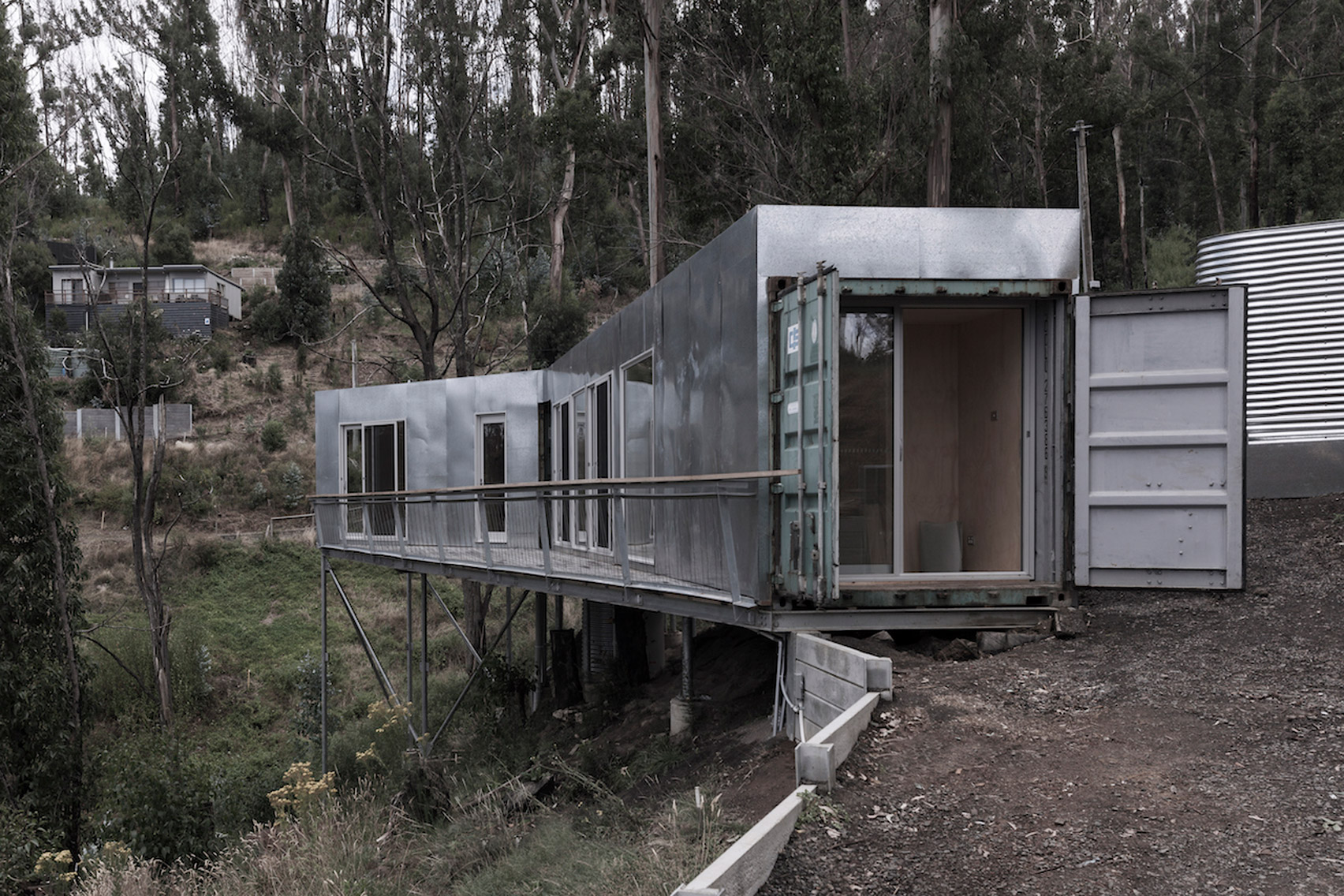 The structure is anchored to the hillside by steel stilts that are embedded in concrete piles.

As the home is not connected to a main water or sewage system, its roof has been designed to collect and filter rainwater that can be used for drinking or the bathroom facilities. 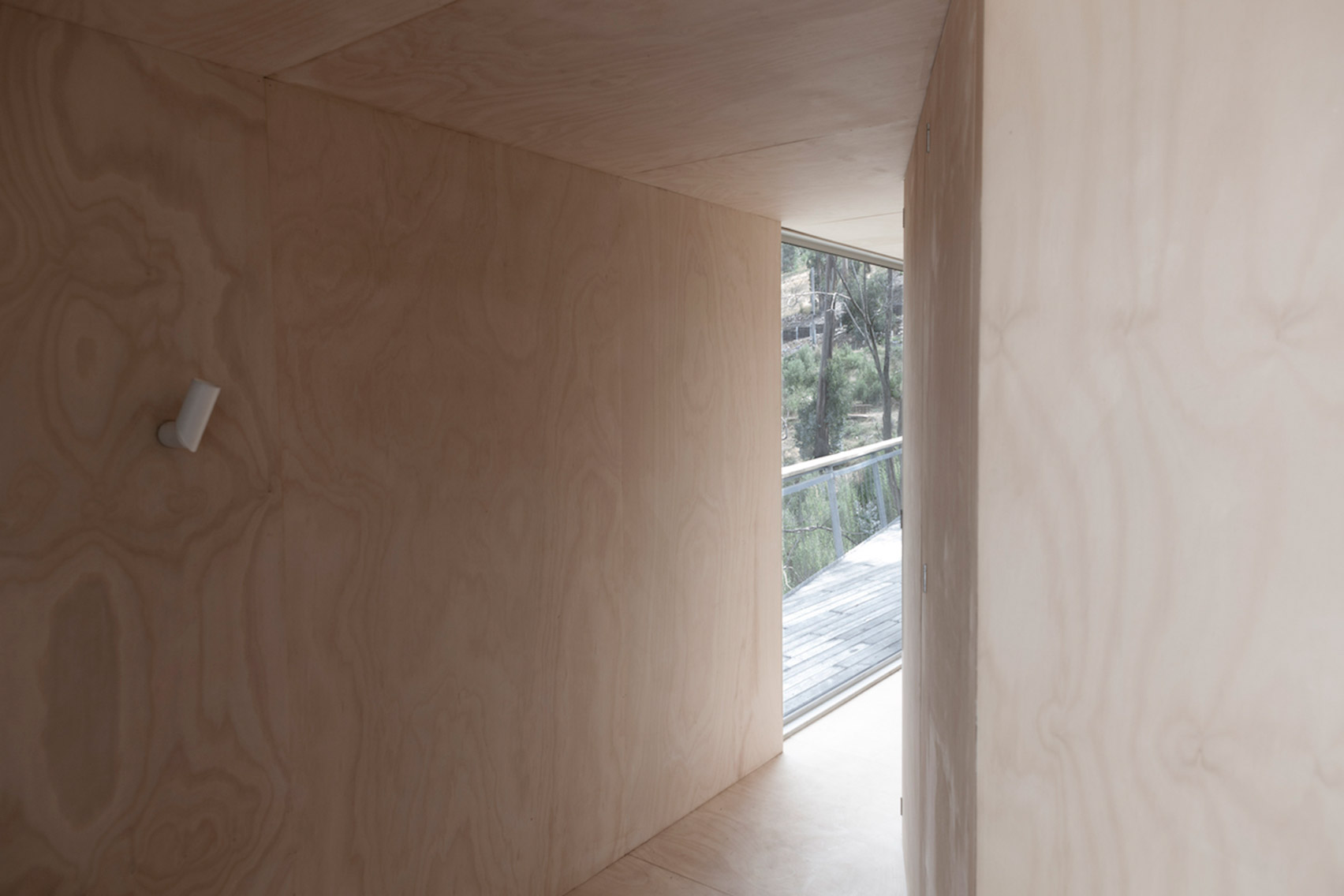 The roof has also been covered with native plants to provide extra insulation in the winter months.

“It also minimises [the house’s] visual impact to its surrounds and from the road above,” said Edwards. 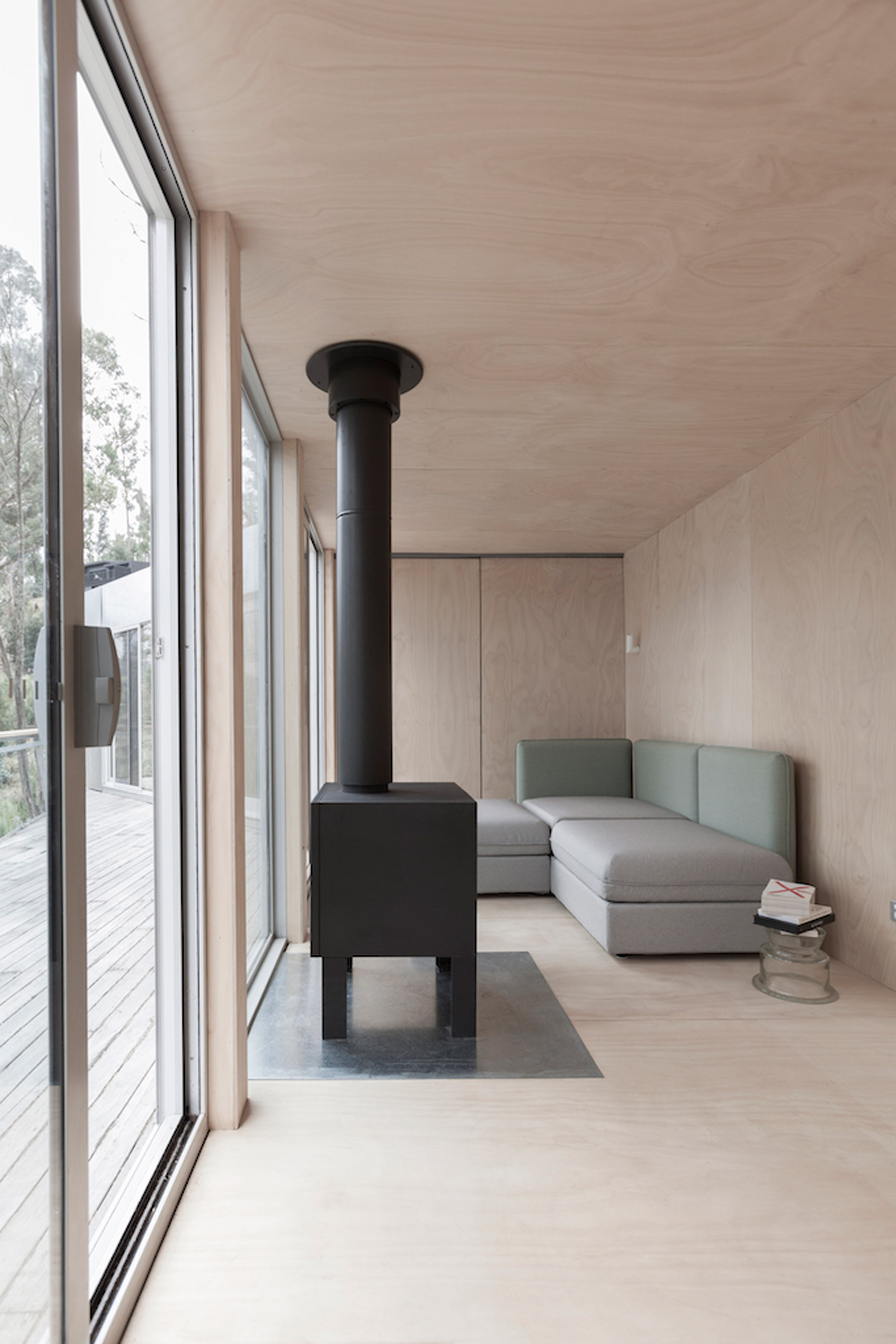 Planting wires have been installed on the northern elevation to encourage greenery to grow over the facade, with the intention of further camouflaging the house over time.

The southern elevation features large windows and glazed doors that provide uninterrupted views of the landscape and ocean. A decked area also offers holidaymakers a place to relax outdoors. 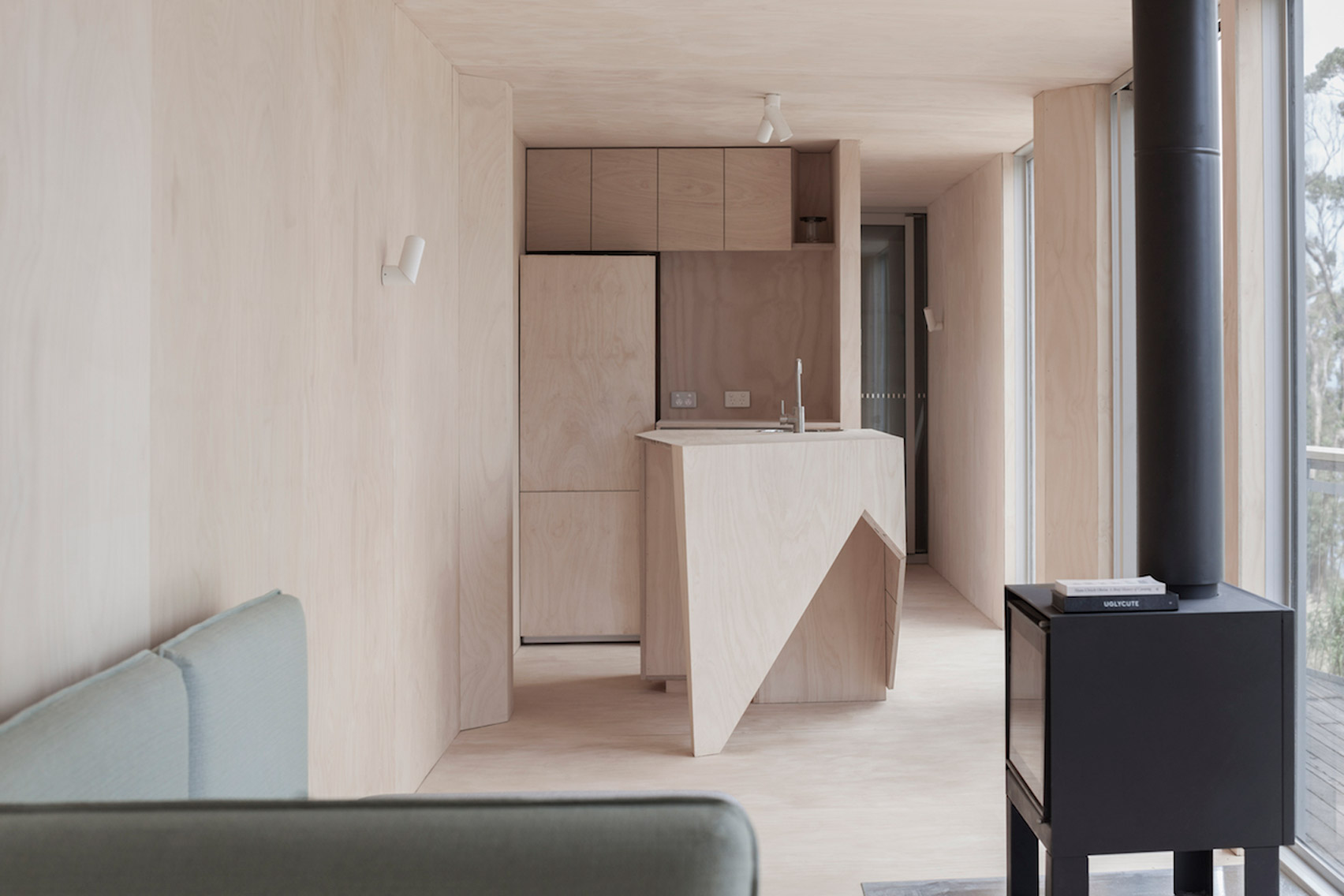 Inside, marine-grade plywood lines the walls and has also been used to make the bed frames, and an angular kitchen island.

Completed with a wood burner in the lounge and furnishings in muted tones, the decor has otherwise been kept simple. 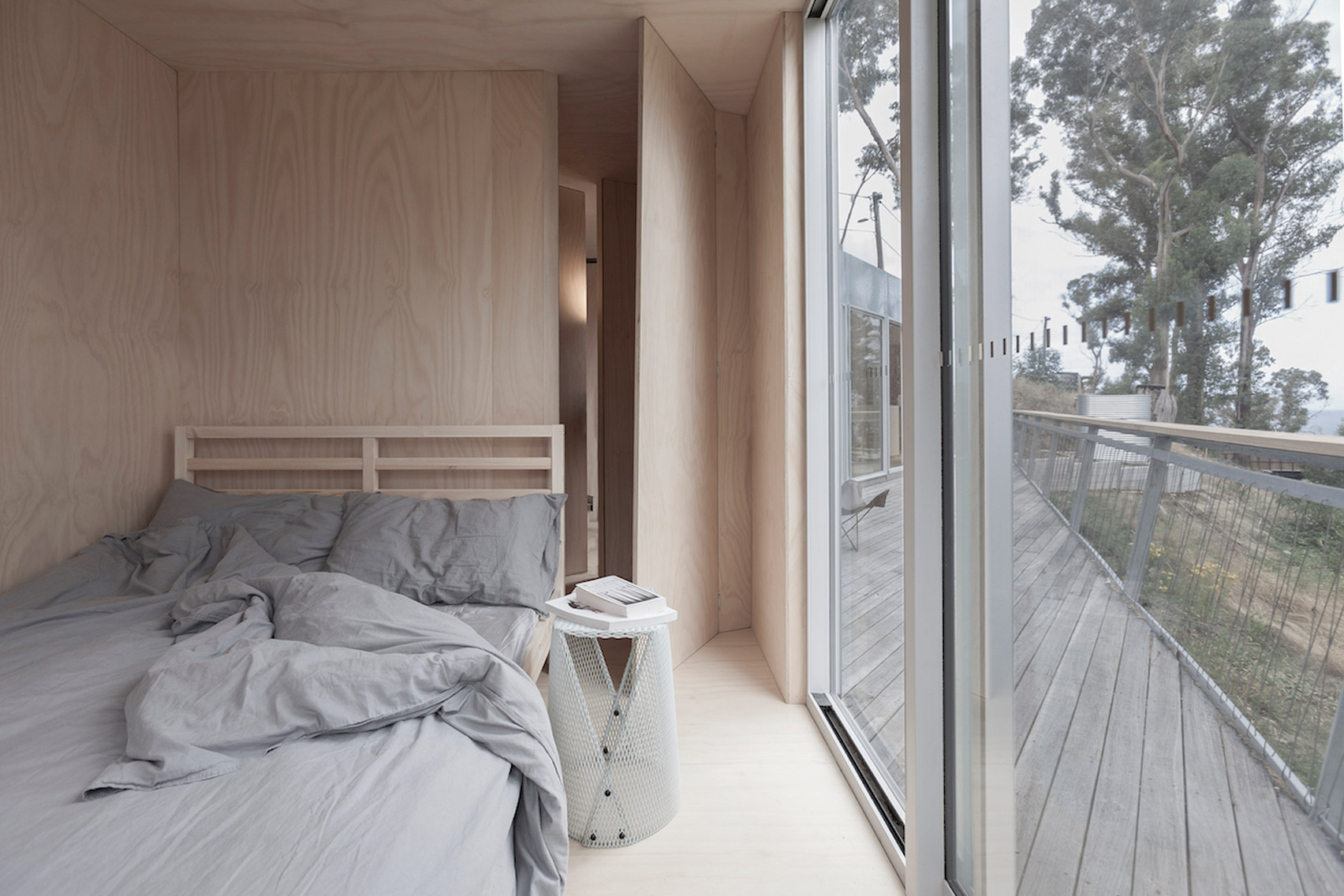 Founded in 2016, Studio Edwards is one of the multitude of architecture practices tapping into the trend of adapting shipping containers for habitation.

Recently, Edward van Vliet converted three containers stacked on a crane into a luxury rental apartment in Copenhagen, while Fenwick Iribarren Architects are currently using the boxy containers to construct a football stadium in Doha. 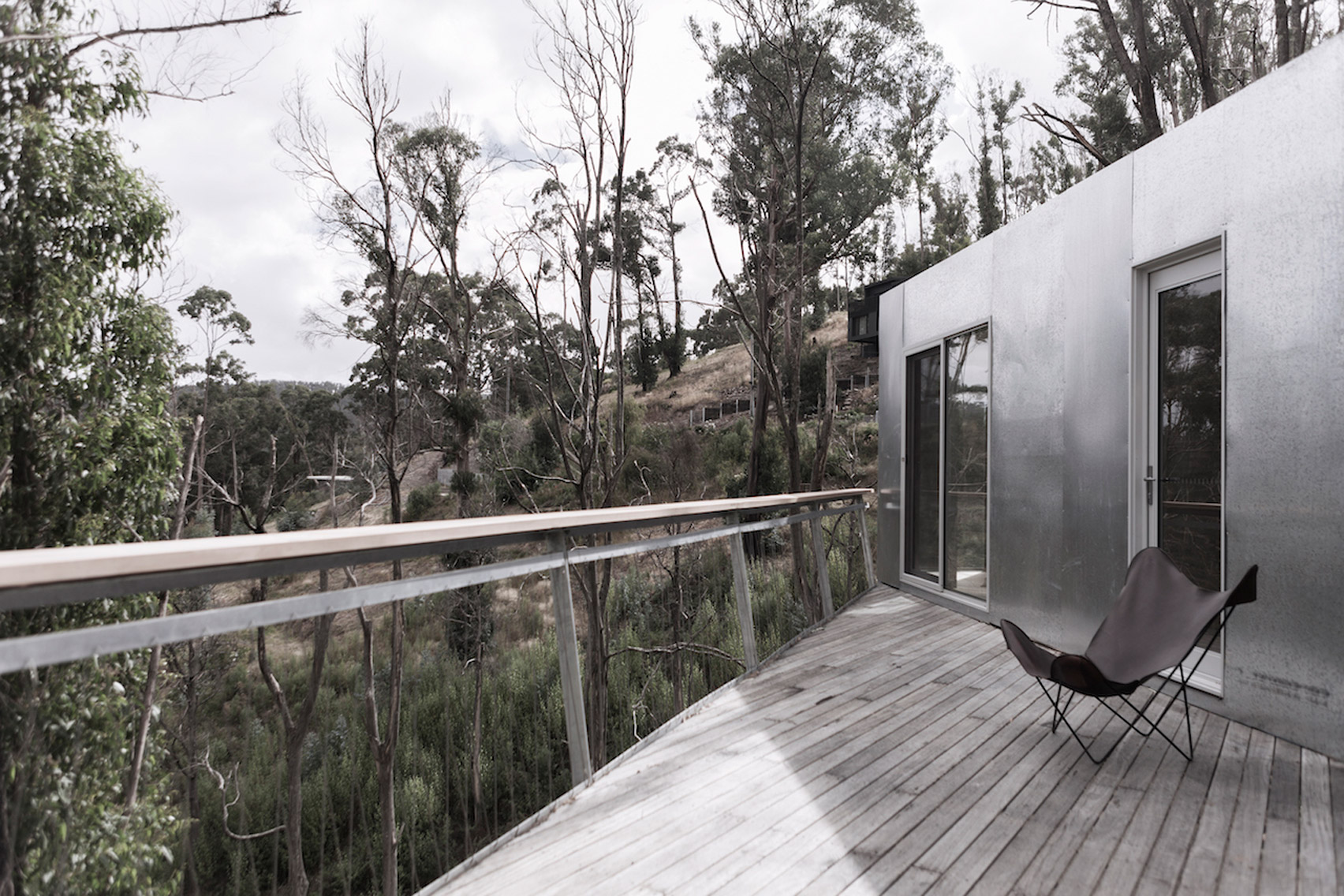 LDezeen’s most popular story of 2017 was architect James Whitaker’s radical proposal for a Joshua Tree residence composed of shipping containers in a starburst arrangement.

Photography is by Tony Gorsevski.