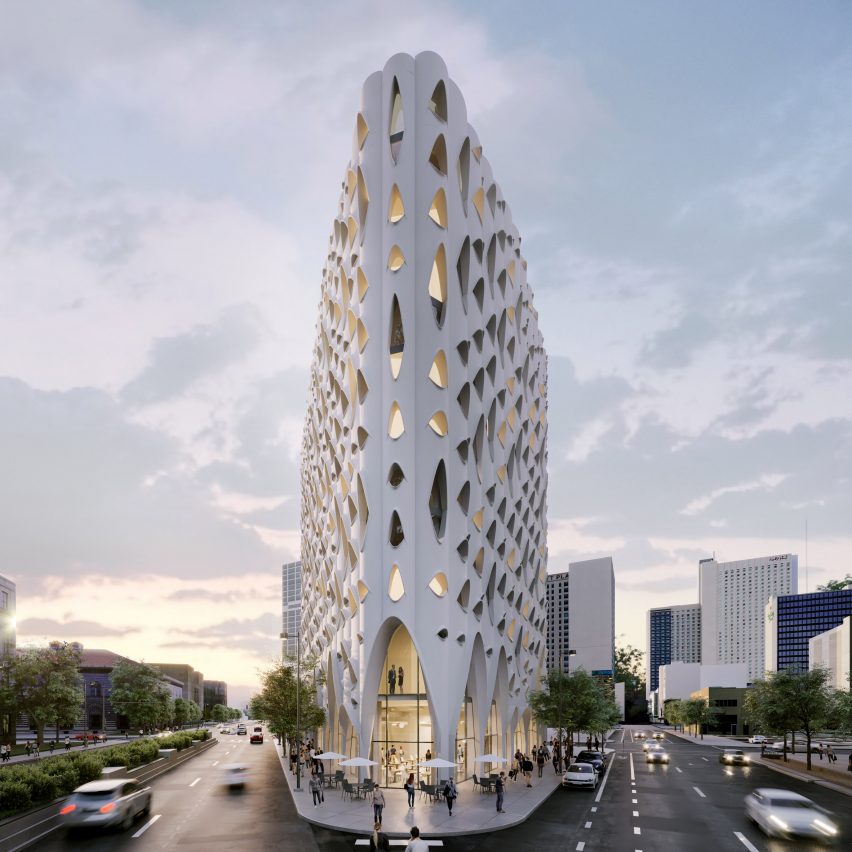 American architecture office Studio Gang has unveiled plans for a hotel in Denver with a white facade punctuated with window openings designed to recall the bark of a tree.

Currently named Populus, the plan is to build the hotel on a corner site in downtown Denver.

The 135,000-square-foot (12,542-square-metre) hotel will be 159-foot-tall (48 metres) and have views of the city and the Rocky Mountains visible from its distinctive scallop-shaped windows.

Studio Gang‘s design for the windows is informed by the eye-shaped patterns found on the bark of Aspen trunks. The hotel will be called Populus after Populus tremuloides, the Latin name for the trees.

Windows at the base of the building will reach up to 30 feet (9 metres) in height, framing the various entrances to the hotel. The ground floor will house the lobby, a restaurant and other amenity spaces.

Further up the building, the facade’s windows will appear hooded with “lids” that jut out in their scalloped shapes. The windows vary in size depending on whether they are attached to public or private rooms.

The windows are also designed in this way for an environmental purpose. Their external hoods stretch outwards according to the positioning of the sun so that the rooms that they are attached to will get maximum shade.

Due to the curved shape of the windows, they will also channel rainwater down the building’s facade, keeping its appearance clean over time.

These features will improve the building’s energy performance in an unpredictable Colorado climate.

From inside the Populus hotel, the scalloped windows will hold impressive views of nearby landmarks such as the Civic Center Park and the State Capitol.

The interior windows will also act as window seats or desks, giving guests the feeling of being outside.

There are plans for a green roof at the top of the hotel, which will be built as a place to socialise at height for guests, and also offer a new habitat for local wildlife.

Studio Gang is an architecture and urban design practice founded by Jeanne Gang in 1997. Recent projects include a student union inside a Wisconsin power plant and a residential high rise in San Francisco.

Images are courtesy of Studio Gang.