A lace-like brickwork facade and an interior inspired by a couture jacket lining are just some of the fashion-inspired features of Studio KO‘s Musée Yves Saint Laurent in Marrakech. 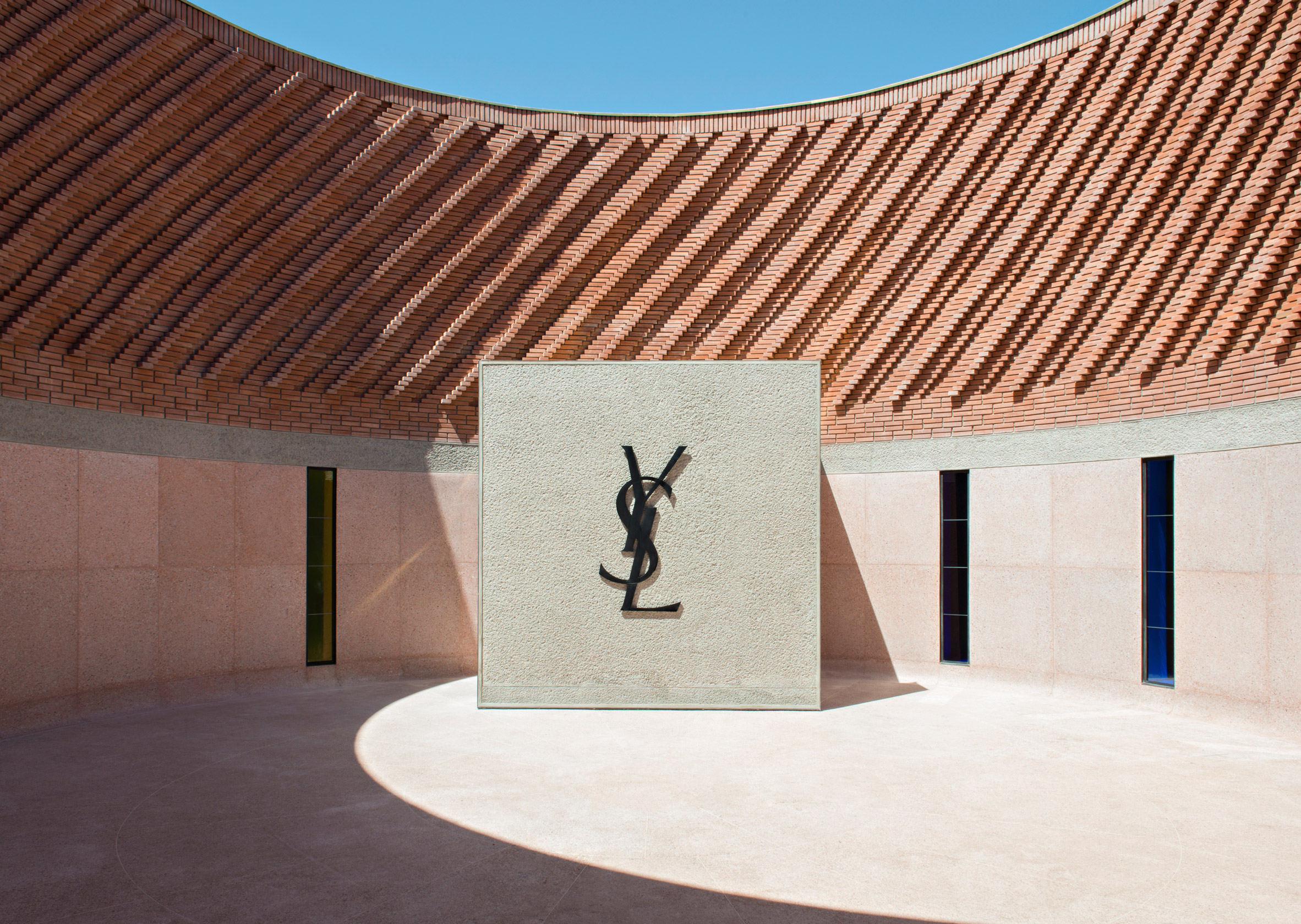 Dedicated to the work of legendary couturier Yves Saint Laurent, the 4,000-square-metre building is the first dedicated fashion museum in Africa.

It includes permanent and temporary exhibition spaces, a research library with over 6,000 volumes, a 150-seat auditorium, and a bookstore and terrace cafe.

In addition, the museum houses a conservation archive and laboratory that will store and upkeep part of the extensive collection of clothing, haute-couture accessories and drawings belonging to the Fondation Pierre Bergé. 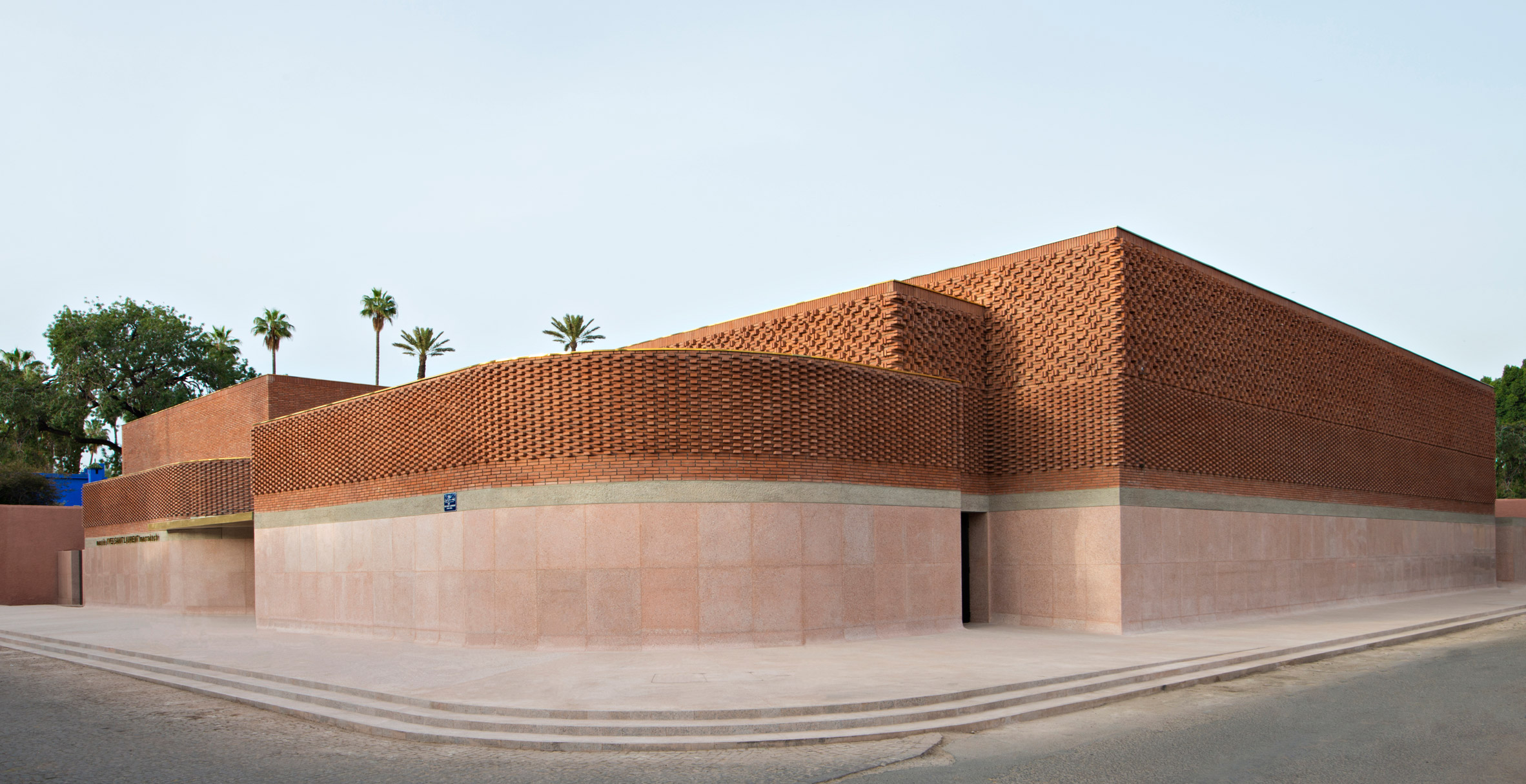 The museum is located on Rue Yves Saint Laurent, next door to the Jardin Majorelle – a 12-acre botanical garden that formerly belonged to artist Jacques Majorelle, but was bought and restored by Saint Laurent and Bergé in the 1980s.

The building’s design incorporates multiple references to the couturier’s work, while also making use of local materials and building techniques. 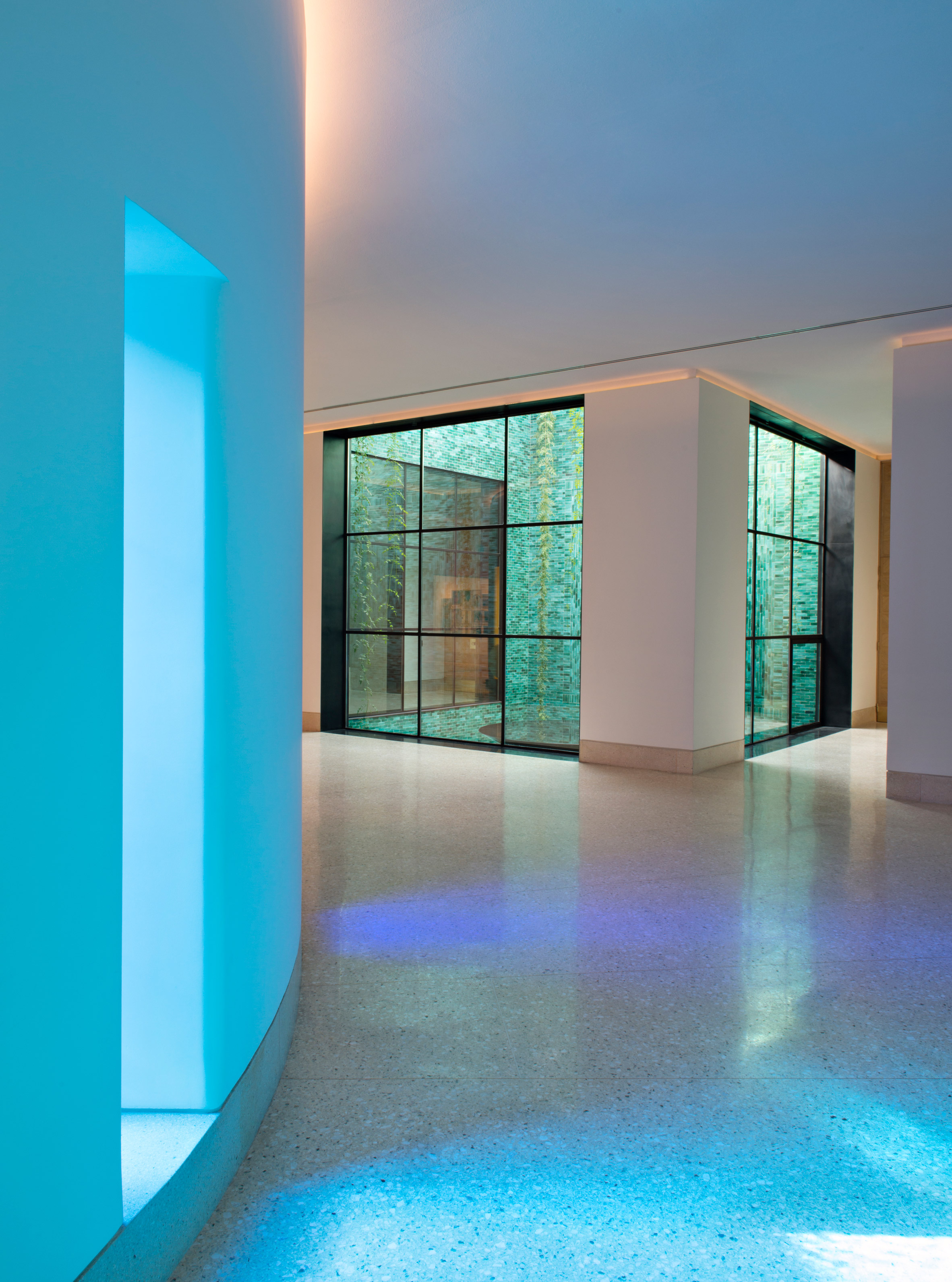 Its exterior incorporates terracotta brickwork designed to recall the warp and weft of fabric, as well as curved and angular volumes in earthen-coloured terrazzo that the French architects said reference the “succession of delicate and bold forms that characterised the work of Yves Saint Laurent”.

In contrast, the museum’s entrance hall has smooth white walls that are designed to evoke the velvety lining of a couture jacket. The monochromatic stained glass windows that circle the curved lobby wall are inspired by traditional Moroccan-style stained glass. 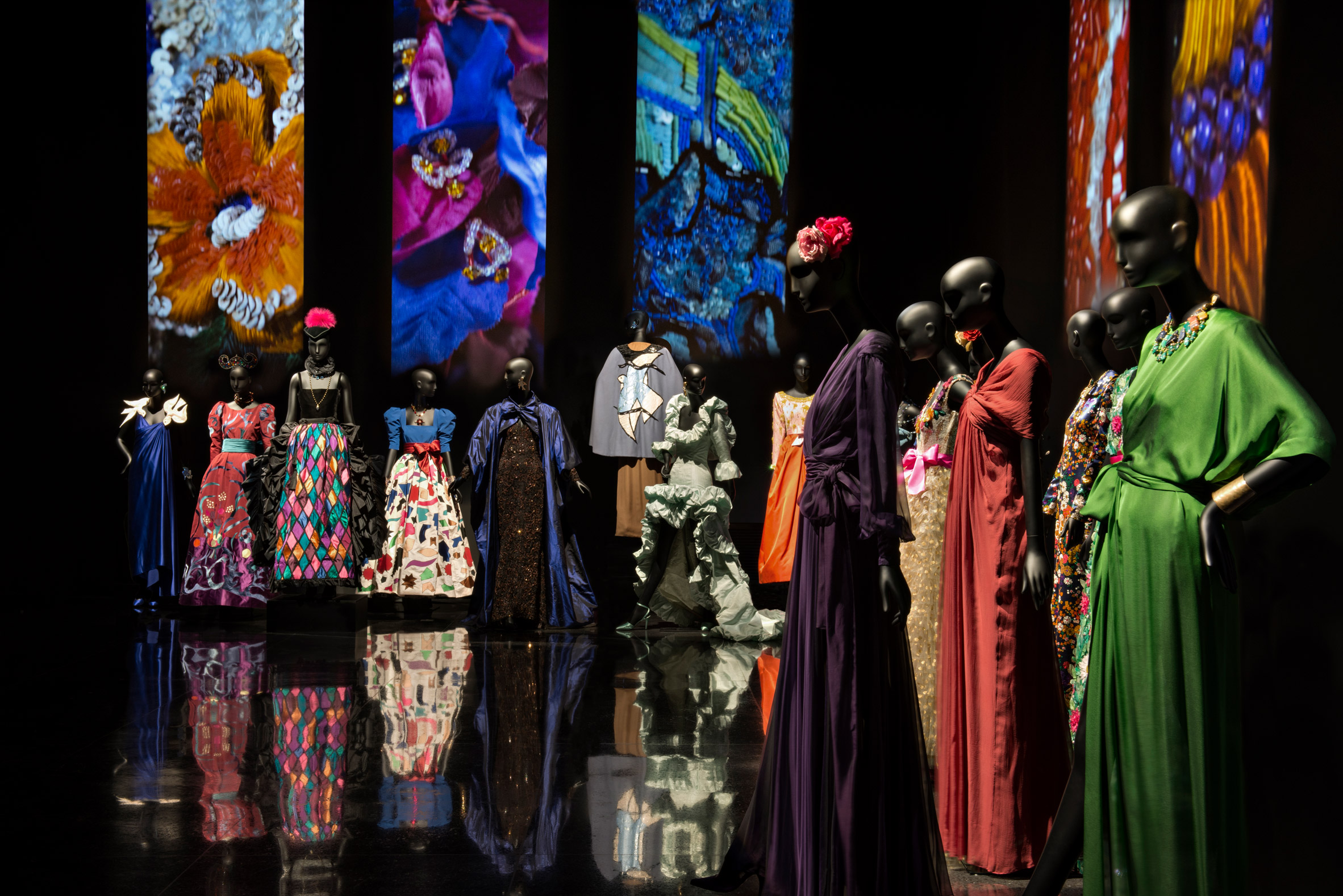 The exhibition is set around themes that were central to Saint Lauren’s work: Masculine-Feminine; Black, Africa and Morocco; Imaginary Voyages; Gardens; and Art. Key pieces include the pea coat, the Mondrian dress, “le smoking” and the safari jacket. 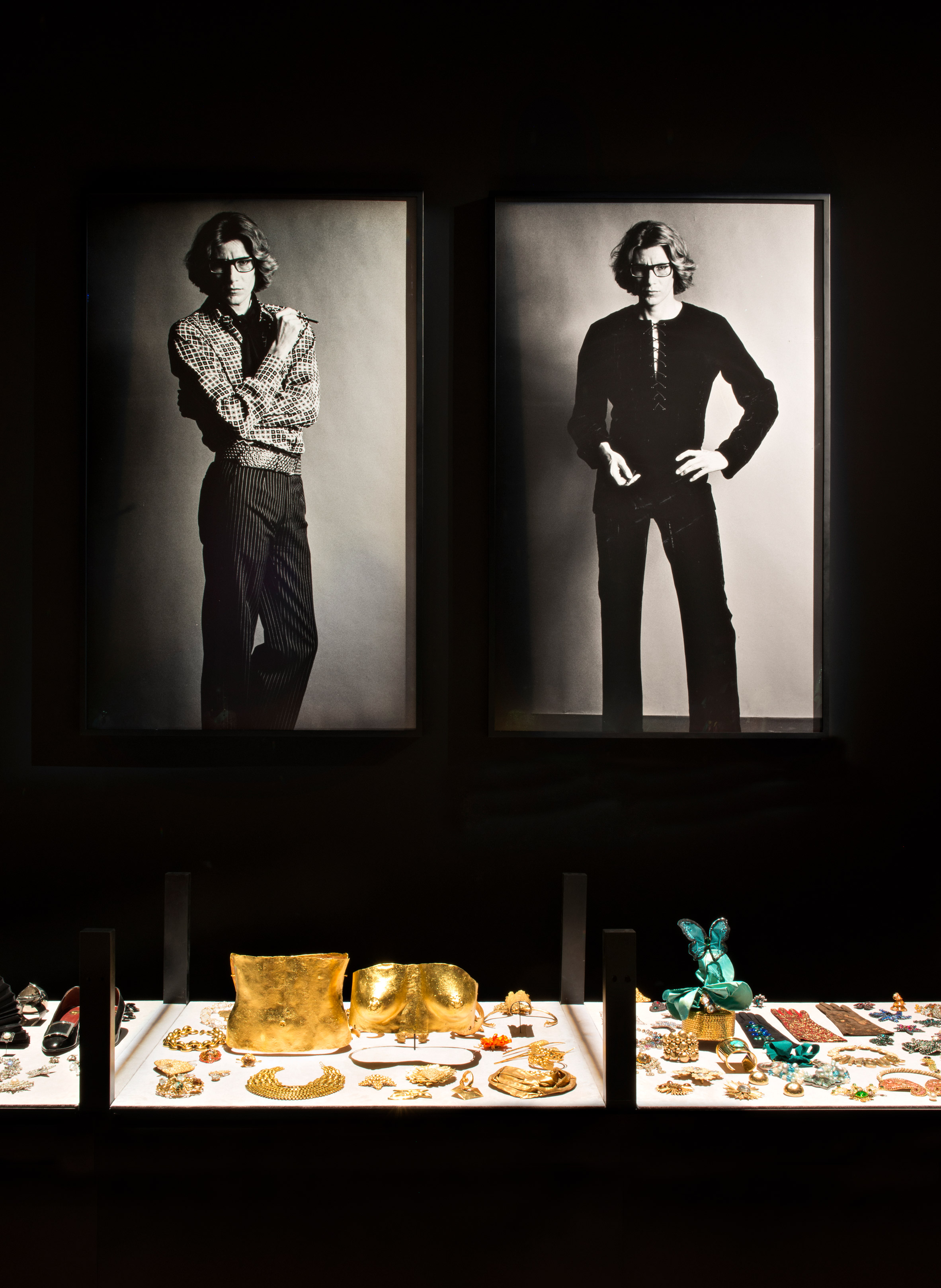 The exhibition’s spot-lit models are backdropped by black painted walls, where an audiovisual installation is projected. The installation brings together written and spoken words, photographs, interviews, music and film extracts that contextualise the exhibited garments.

“It is not a retrospective, but rather a voyage to the heart of his work,” said Christophe Martin.

“More that 50 garments, most never before seen, are displayed in an understated environment, one without affectation, which accompanies and underscores the work. An immense, luminous and radiating portrait of Yves Saint Laurent envelopes the garments.” 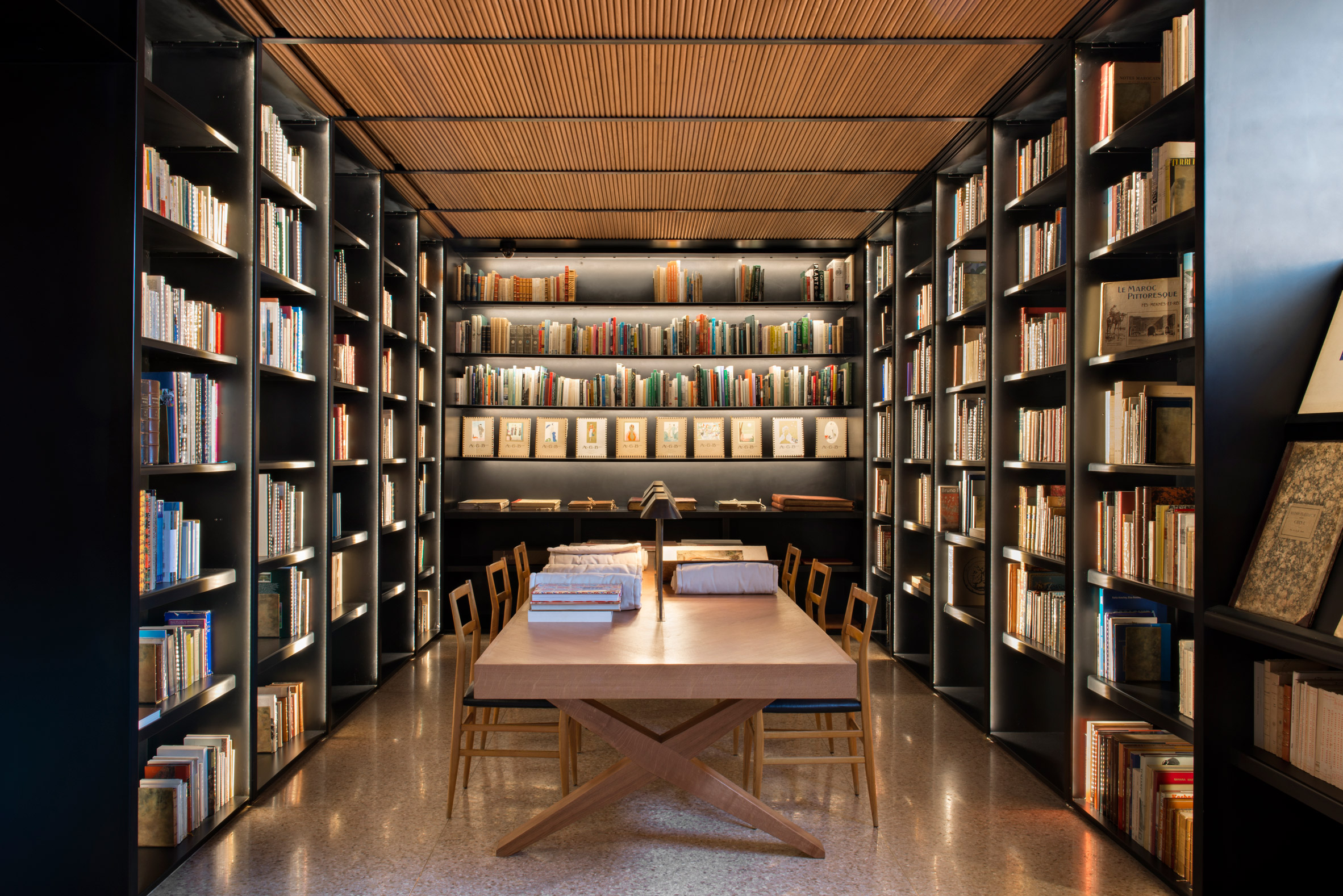 Traditional Moroccan materials – such as glazed bricks, zellige tiles, granite, laurel branches and oak – are incorporated in a contemporary way in other areas, including the museum’s cafe, library, stairwells, courtyards and hallways. 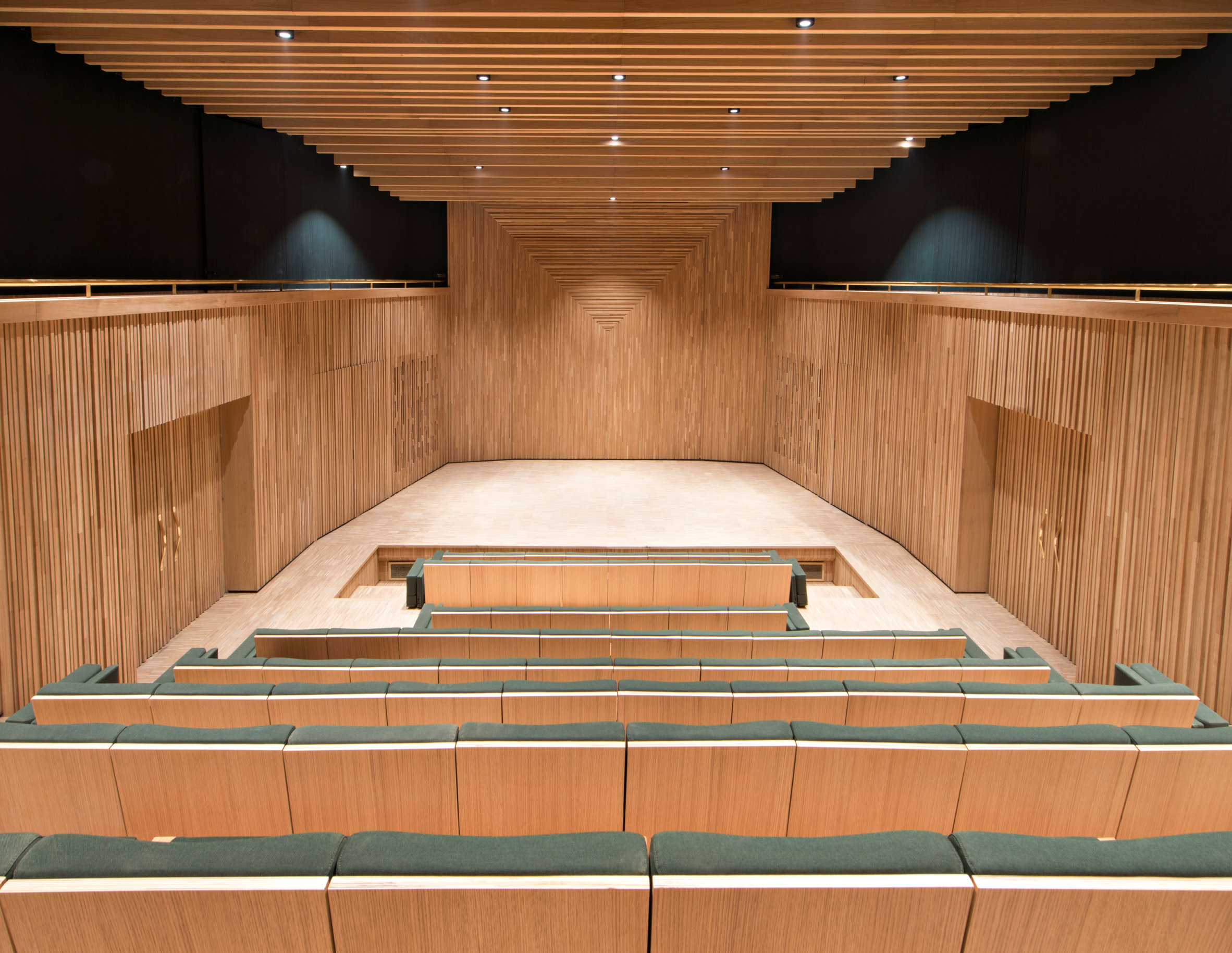 An oak-lined 130-seat auditorium will showcase a programme of films, fashion shows and documentaries. As well as live music, the auditorium will host symposiums about botany and berber culture, fashion and costume.

The museum’s temporary exhibition space opens with a showcase of 30 artworks by Jacques Majorelle that have been lent by private and institutional Moroccan collections. It has been painted a bright Majorelle blue for the occasion. 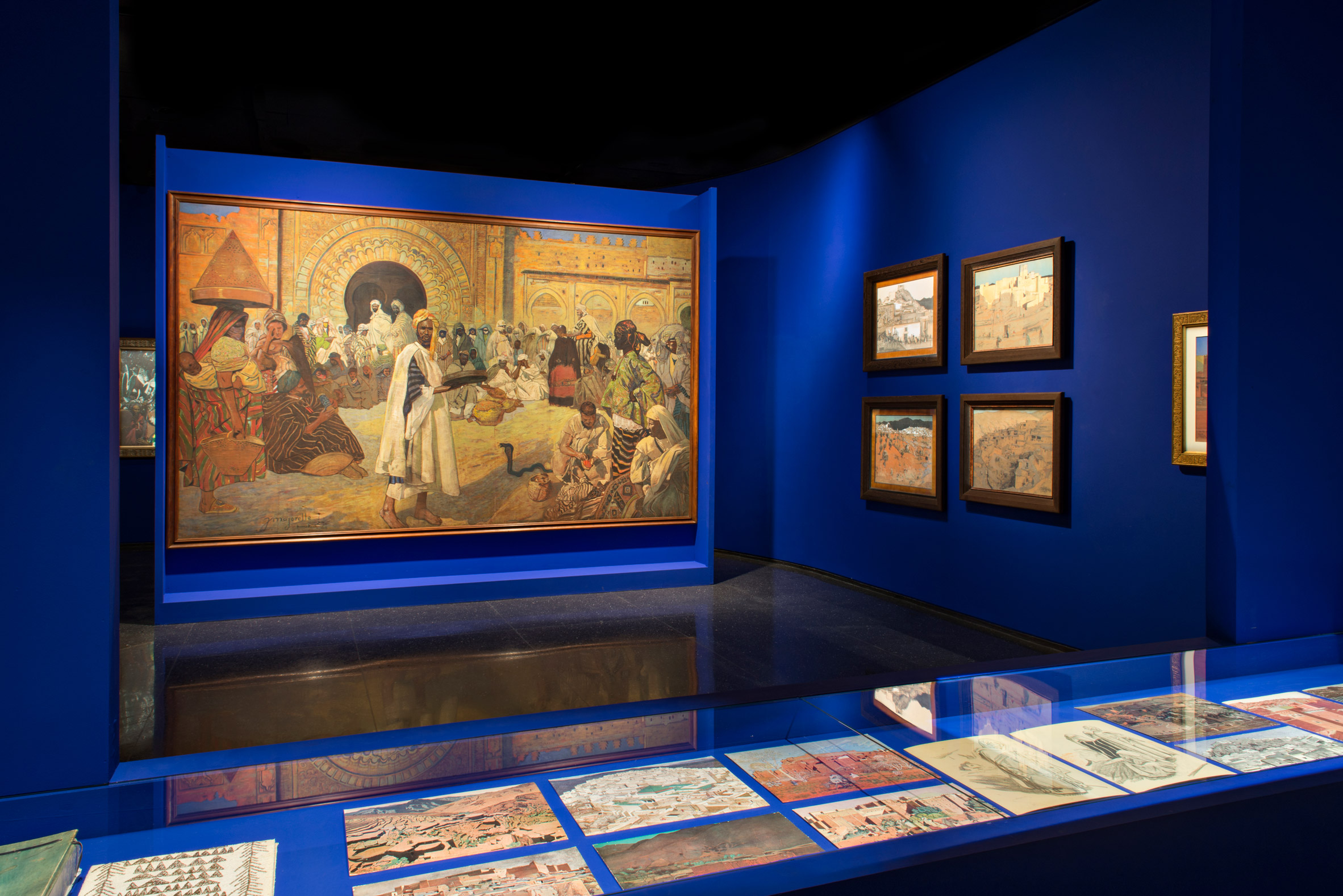 French designer Philippe Apeloig, who in 2010 had designed the poster for the Yves Saint Laurent retrospective at the Petit Palais in Paris, has created the museum’s visual identity. 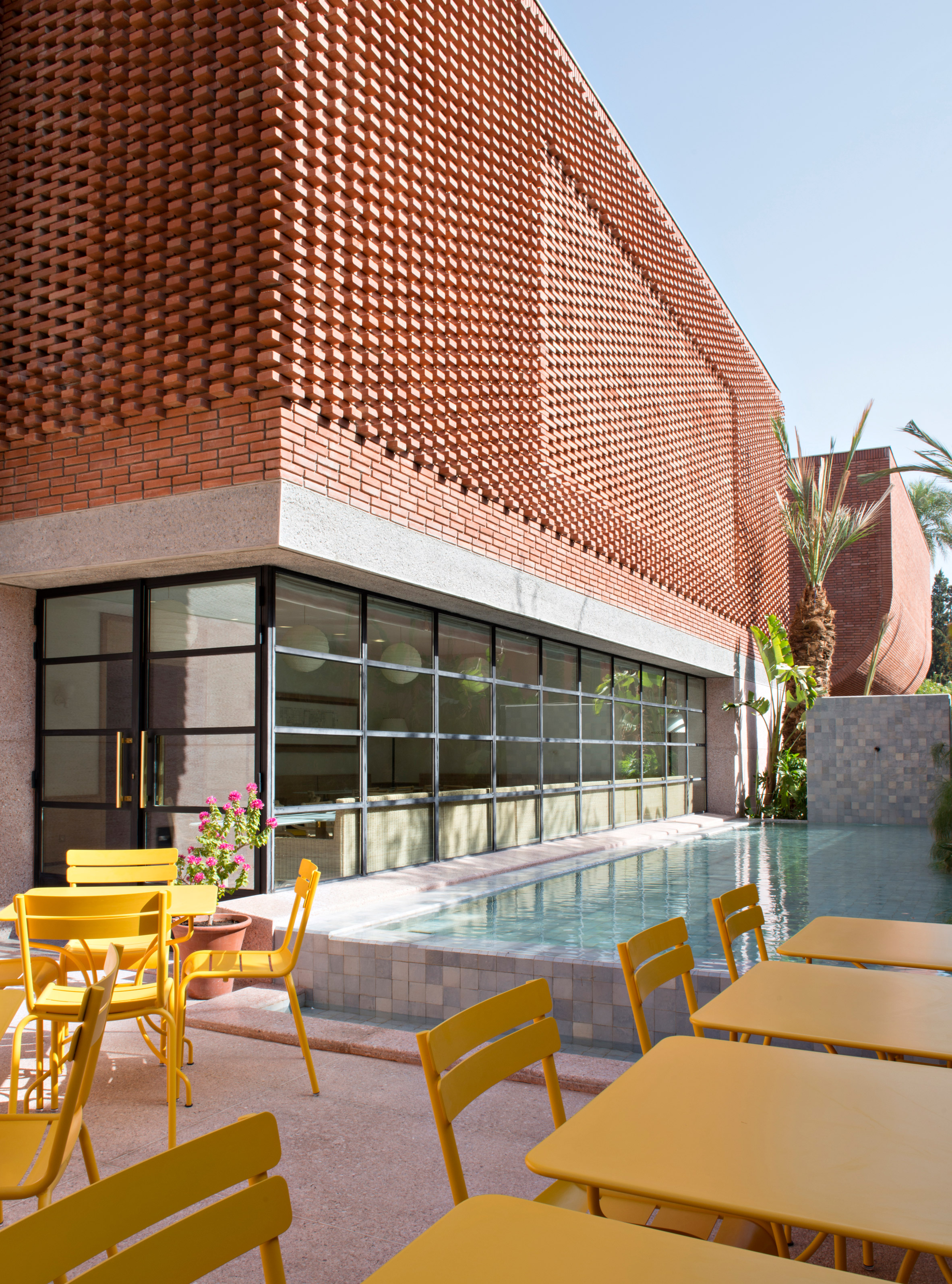 “Musée Yves Saint Laurent Marrakech combines two worlds that we are very familiar with and that are dear to our hearts: fashion and Morocco,” said Studio KO.

“Since the founding of our architectural firm, we have worked in this country that so inspired Yves Saint Laurent.” 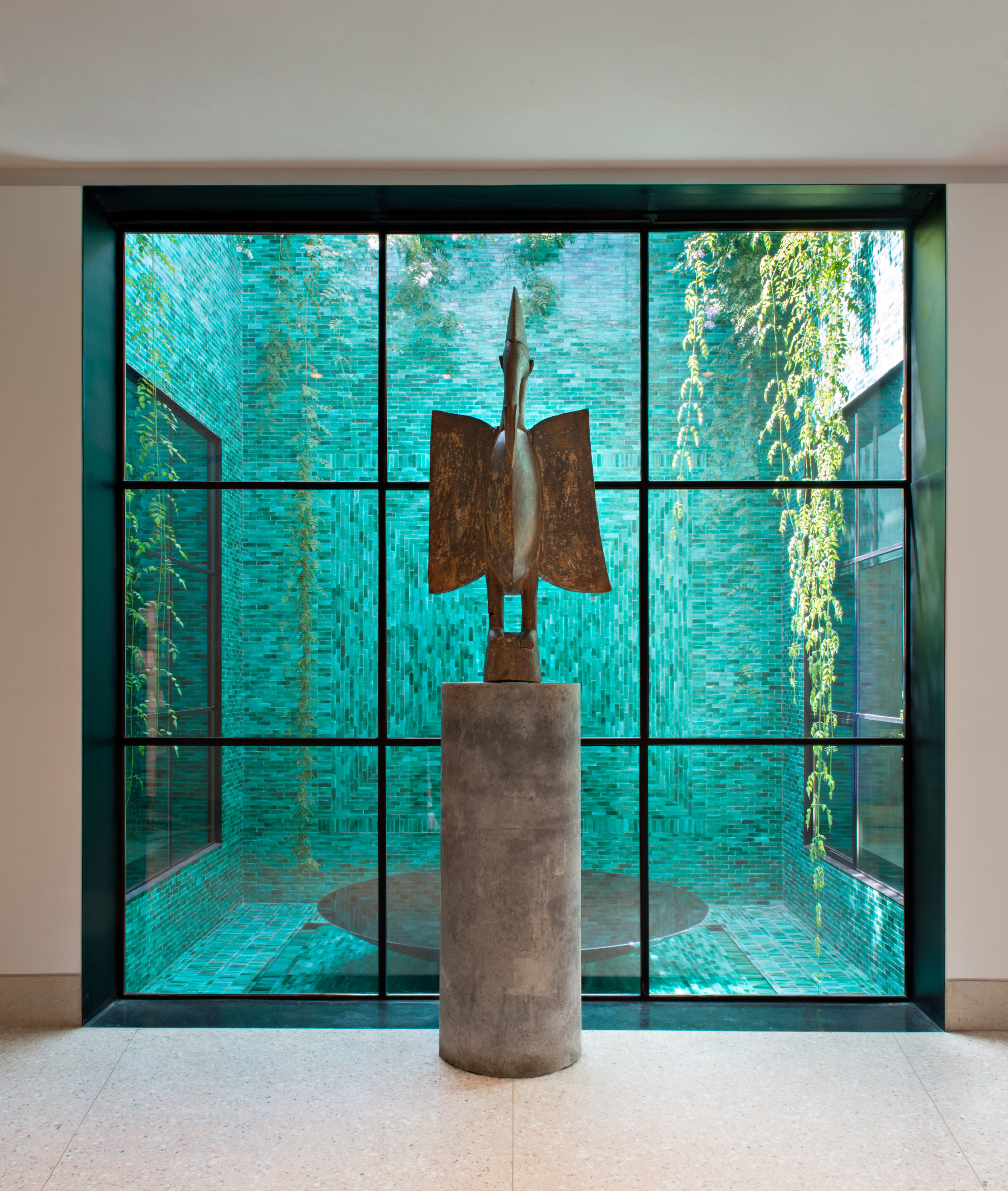 “It is with great joy that we have worked on this ambitious project, and contributed in our way to the history and prestige of the most influential fashion designer of the 20th century,” the architects continued.

Established by Olivier Marty and Karl Fournier, Studio KO was commissioned to design the museum by the late Pierre Bergé, the longtime partner of Yves Saint Laurent. 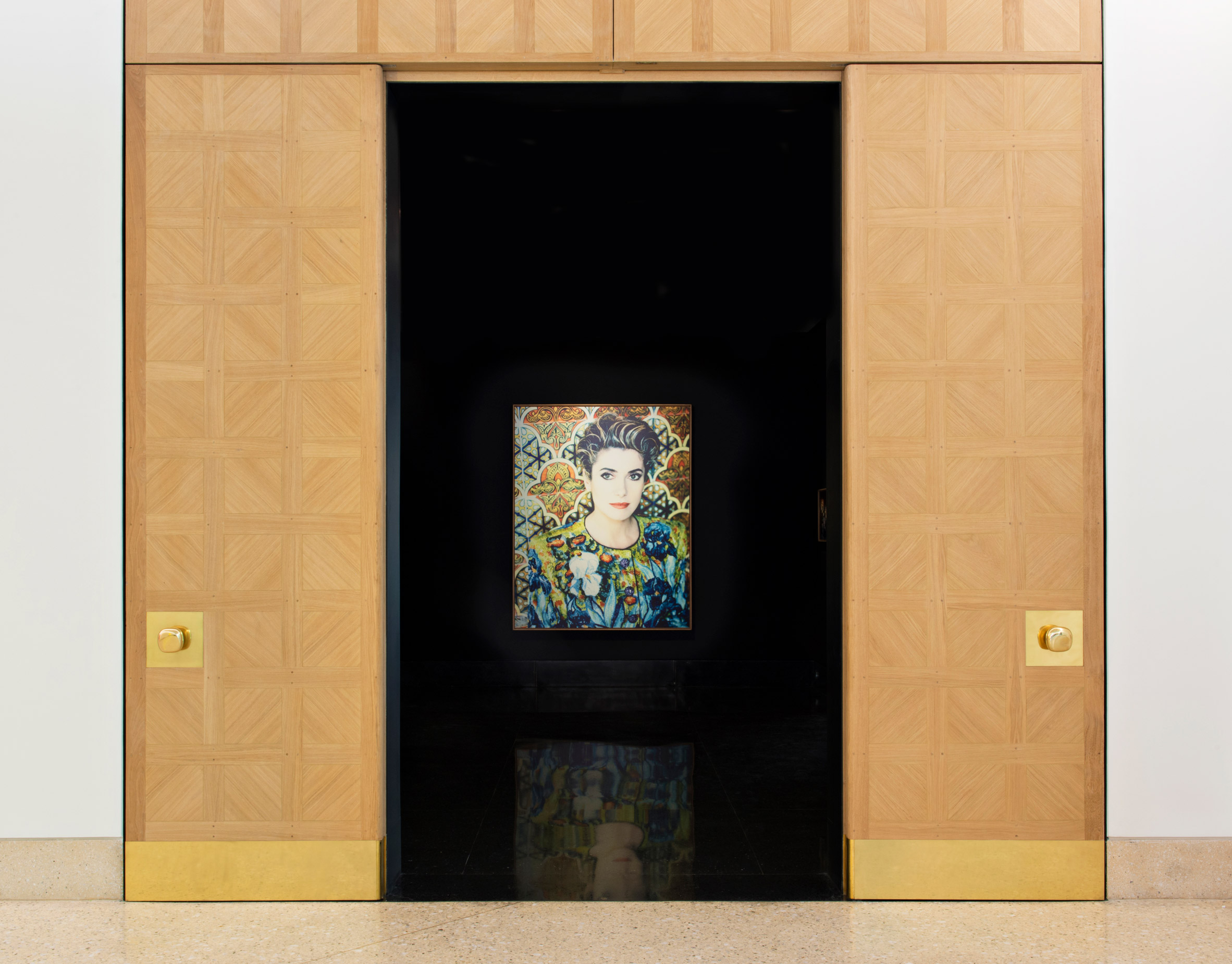 Bergé, who masterminded the project, passed away on 8 September 2017, just over a month before its opening yesterday.

He said in a statement earlier this year: “When Yves Saint Laurent first discovered Marrakech in 1966, he was so moved by the city that he immediately decided to buy a house here, and returned regularly.”

“It feels perfectly natural, 50 years later, to build a museum dedicated to his oeuvre, which was so inspired by this country.” 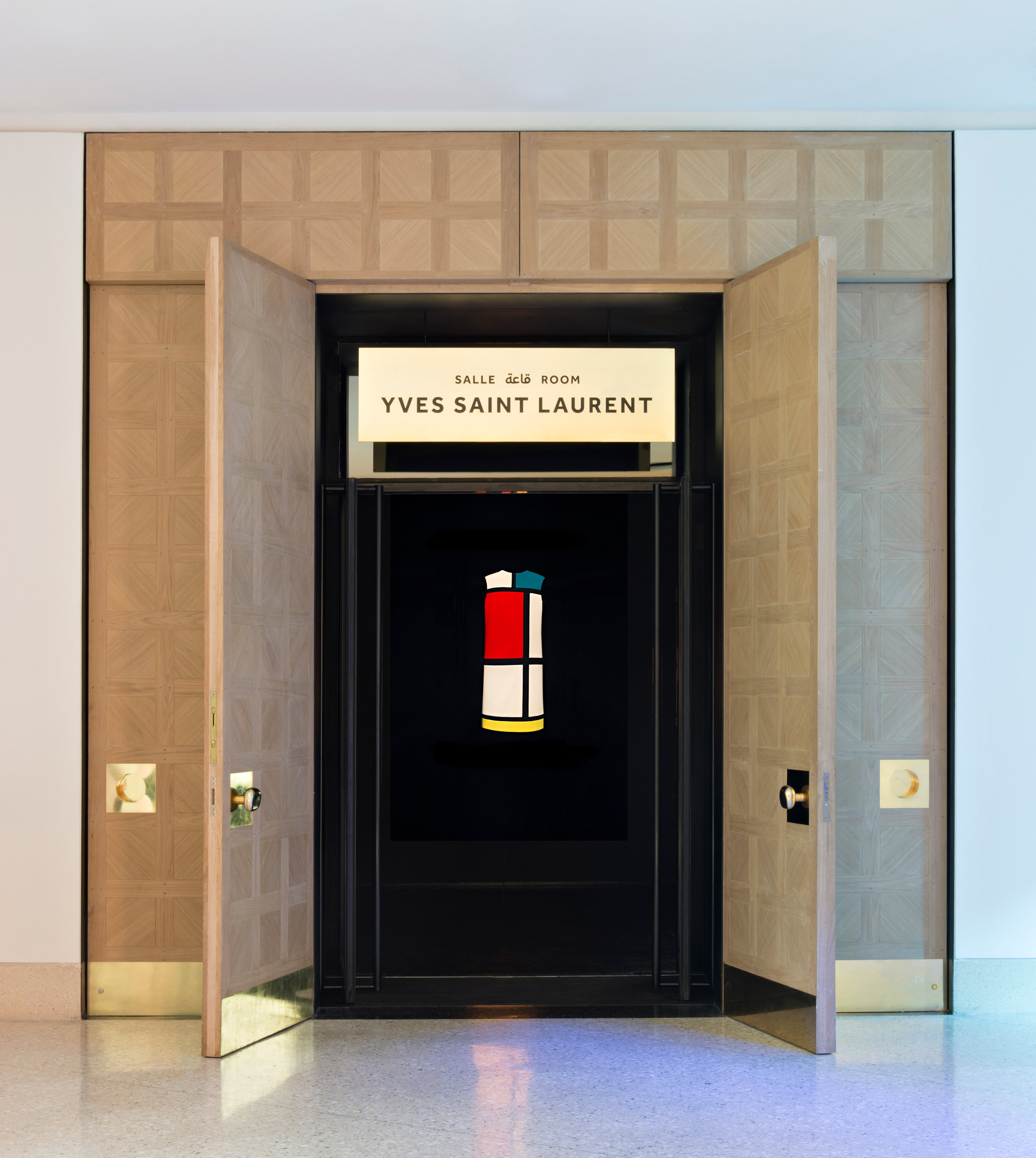 The opening of the Marrakech museum coincides with the inauguration of the Musée Yves Saint Laurent Paris, which is located at the former fashion house and current headquarters of the Fondation Pierre Bergé – Yves Saint Laurent at 5 Avenue Marceau.

Photography is by Nicolas Mathéus.