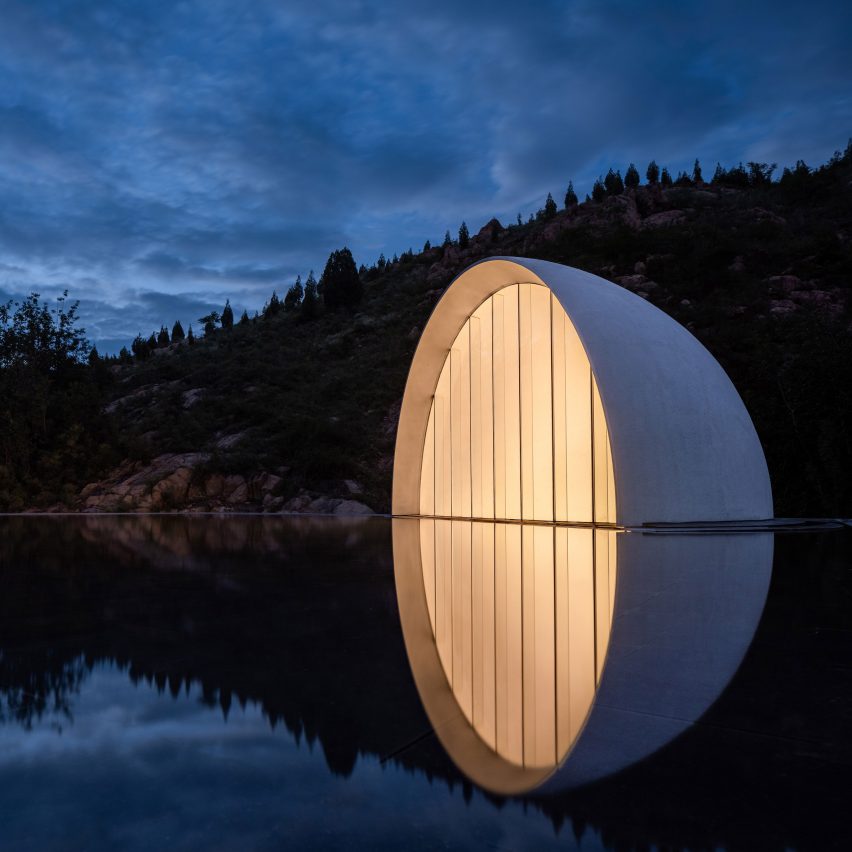 An illuminated semicircular window above a pool of water simulates “a moon that never sets” on the roof of a ceremonial hall designed by Syn Architects, in the dramatic landscape surrounding Mount Tai in China.

Hometown Moon is part of a creative strategy commissioned by the Lushang Group in 2019 for a 55-square-kilometre area north of Tai’an City, intended to encourage visitors to explore the natural landscape and to better connect the local villages.

“Lushang Group demanded a holistic approach to connect the string of mountain villages in the area,” said Syn Architects.

“We returned to the birthplace of Confucianism, rebuilding the relationship between dualities such as city and the countryside.”

The hall, which will be used to host weddings, is located at the end of a “purifying road” through the mountains.

Hometown Moon is designed to sit in dialogue with this structure, influenced by a large, illuminated balloon that was lit during the area’s Mid-Autumn festival.

“The buildings complement each other as symbolic counterparts…after crossing a mountain, a river and exploring a few curved pathways, visitors finally arrive at the building,” said the practice. The chapel building is a concrete structure, with a large external canopy supported by columns set in deep cut-outs that are illuminated at night.

Inside, a double-height hall features a mountain-like sculptural form on its floor, alongside a block of toilets and a spiral staircase that leads up to the roof.

“Graceful rock slabs, stone objects, smooth grey concrete cover the walls and floors of the structure, almost as if they were a part of the mountain,” said the practice.

The “moon” effect is created by a semi-spherical form that cuts through the hall’s roof plane, emerging above as an illuminated window and bouncing light down into a dramatic light-scoop in the ceremonial hall below.

Above, a thin pool of water on the roof creates a reflection that turns the “setting moon” into a “full moon” from a distance. Inside, a similar effect is produced by a mirrored ceiling, which also amplifies the natural light.

“The curved wall of the moon forms a natural echo cavity, like a functional symbol that amplifies the promise between lovers, conveying their vows to the world,” said the practice.

The staircase leading up to this roof opens onto a crescent-shaped concrete viewing deck, allowing for views across the water out towards the landscape and the villages below.

Many of China’s natural landscapes have seen increased investment in designs for tourism, with previous projects including a riverside visitor centre in Huangyu comprising a series of pine pavilions by DnA_Design and Architecture.