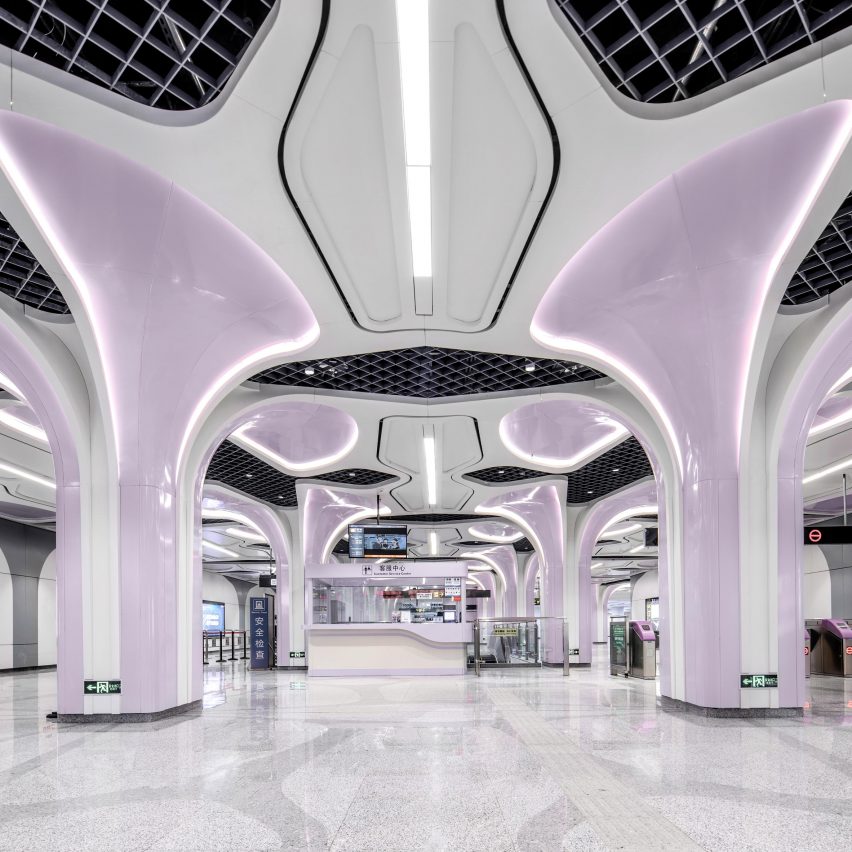 London’s much-anticipated Elizabeth Line finally opens today. As it is unveiled, here is a roundup of 10 metro stations from across the globe that have been updated in recent years.

The Elizabeth Line, or Crossrail, is a gargantuan infrastructure project that will see large new trains running 118 kilometres through London and well beyond, slashing journey times in the south of England.

Dezeen previously published a guide to the architecture of the various new London stations, which were designed by a range of different architecture studios.

But the British capital is not the only city to have upgraded its underground railway network since the turn of the millennium.

Here are 10 architect-designed metro stations from around the world:

These stations were created to be functional and understated. For example, corners follow the smooth curve of the train tunnels to reduce the risk of collisions between commuters.

“Everything is sized for the size that it needs to be to cope with the people that need to move through the system,” the project’s head of architecture, Julian Robinson, told Dezeen in an interview.

Find out more about the Elizabeth Line ›

Spanning 22 kilometres, this underground rail line features stations with a mixture of fluid lines and shapes informed by local flora and fauna. For example, the design for lilac-hued Jincheng Avenue takes cues from lotus flowers.

Hailed as the first unmanned metro line in the west of China, Line 9’s trains communicate with each other using the 5G mobile network.

Find out more about this Chengdu metro line ›

Architecture office Cobe and engineering firm Arup created two metro stations as part of a docklands development in Copenhagen, one of which is elevated and forms a landmark structure.

“Orientkaj station celebrates the industrial architecture of the harbour,” said Cobe founder Dan Stubbergaard. “The station outline is a large, bold and simple silhouette evoking the cranes, containers and warehouses you see in the docklands.”

According to UNStudio, the stations’ designs aim to preserve traditional Qatari architecture and Doha’s history while also reflecting the city’s modern reputation.

“The vault was chosen as this referential bridge between past and present,” explained the firm.

Find out more about these Doha Metro stations ›

Stations for Noord/Zuidlijn, the Netherlands, by Benthem Crouwel Architects

Each station is linked by a palette of smooth materials designed to be easy to clean and replace, while entrances were left uncovered to create a sense of continuous public space.

Find out more about these Noord/Zuidlijn stations ›

Vaughan Metropolitan Centre Station is the north terminus of the western section of Toronto Transit Commission’s 1 train line in Canada.

Global firm Grimshaw Architects created a swooping, shell-like roof fitted with mirrors underneath it for the station, designed to redirect natural and artificial light around the space.

“We wanted to bring daylight down into the box for wayfinding and passenger experience,” said Grimshaw partner Juan Porral. 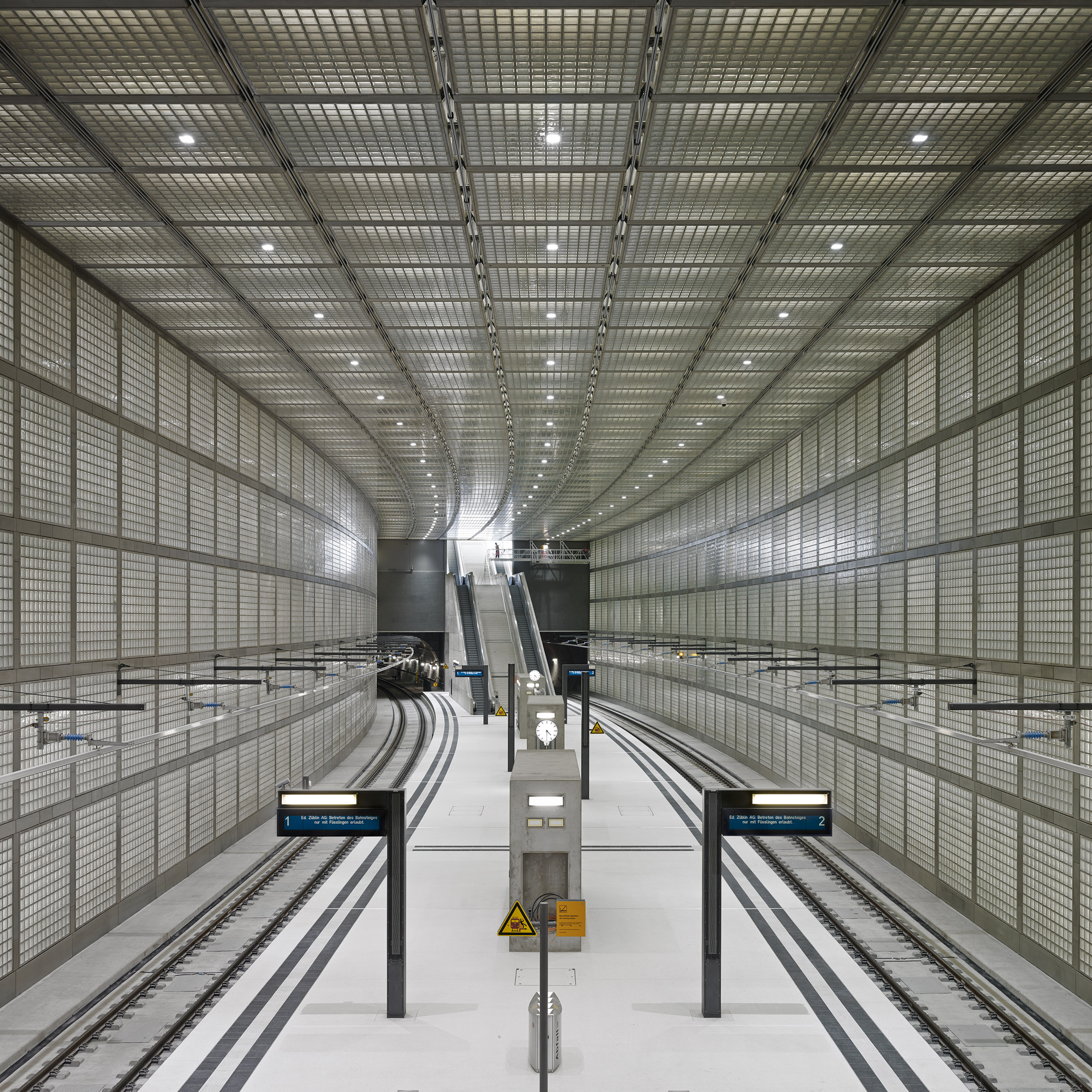 Illuminated glass blocks line the 40-metre-long tunnel that makes up this metro station in Leipzig by Swiss architect Max Dudler.

A material palette of harsh concrete is set against these lit-up elements, while the platform features a pale terrazzo finish.

Completed in 2013, Dudler won a competition to design the station in 1997 with a proposal that planned for a glowing tunnel.

Find out more about The Wilhelm-Leuschner Platz S-Bahn station › 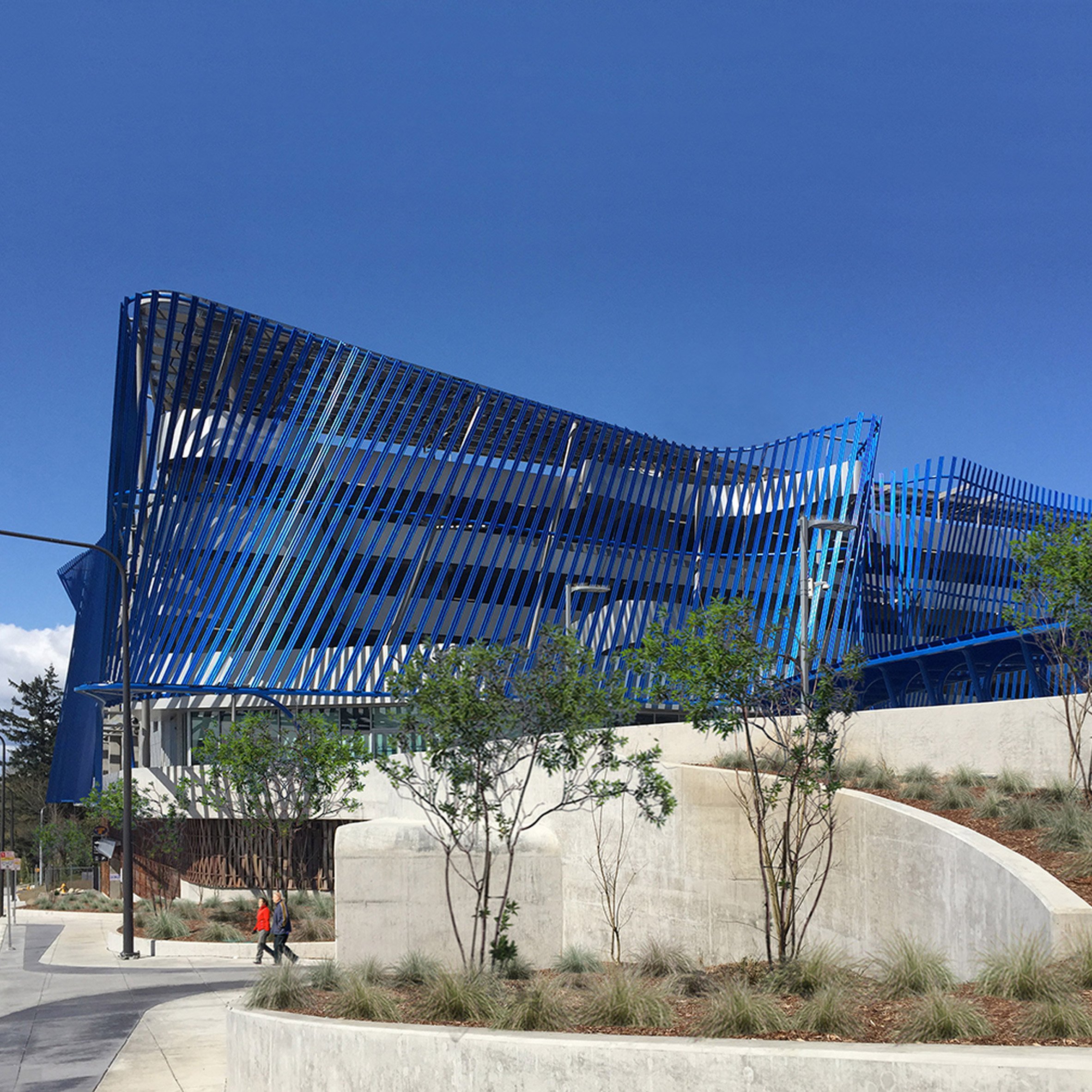 Californian firm Brooks + Scarpa wrapped a Seattle transit facility in a bright blue, undulating aluminium screen that takes cues from the motion of a dance performance.

More than 7,500 panels were used to create the screen, which was formed by connecting two curves with a series of straight lines using ruled surface geometry, according to the architecture office.

The Angle Lake Transit Station and Plaza is elevated rather than underground, serving as a stop along a light rail line that connects Seattle’s airport to the downtown district and the University of Washington.

Find out more about The Angle Lake Transit Station and Plaza › 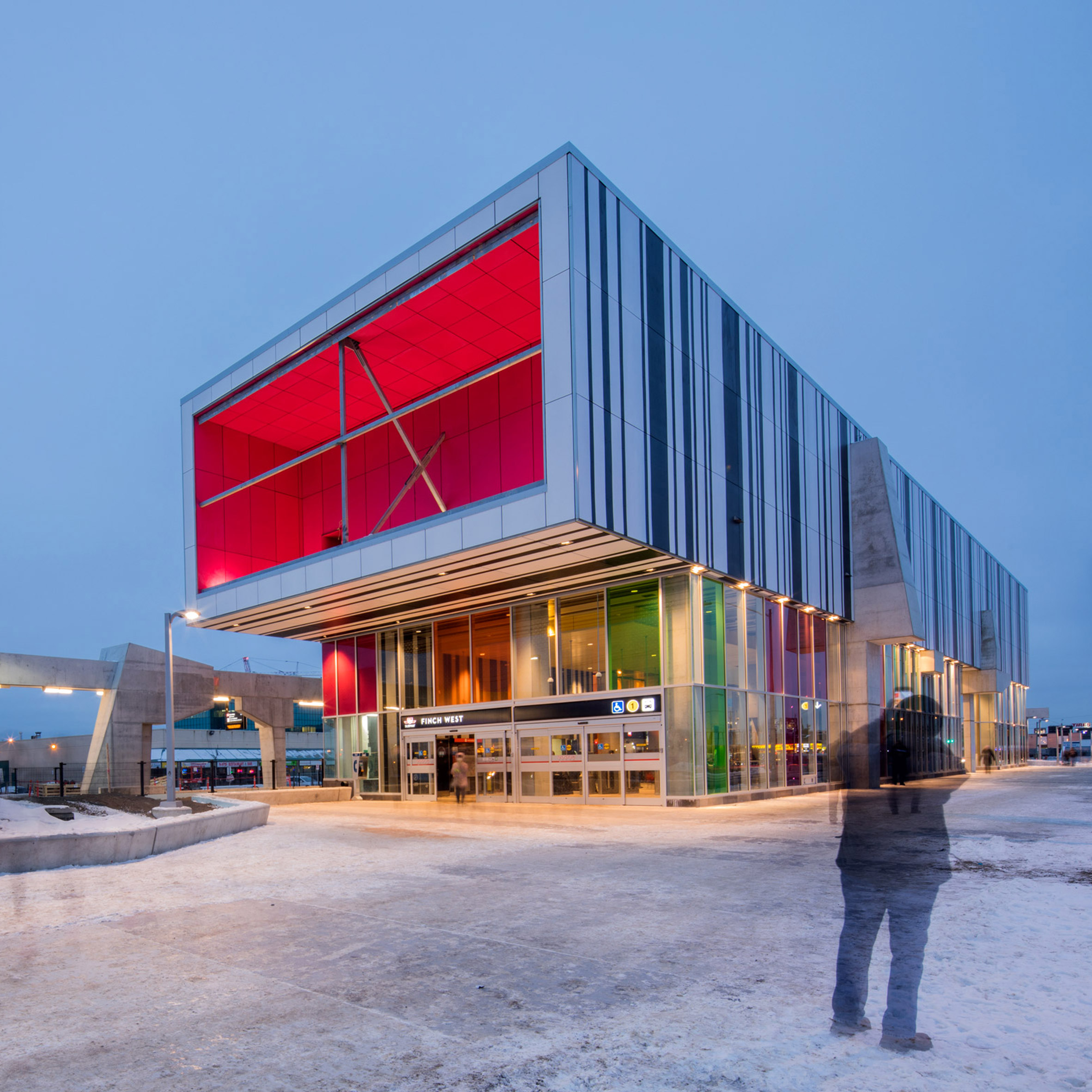 Both stations are characterised by cantilevered roofs, polished concrete interior walls and distinctive pops of colour that make them recognisable throughout their spaces.

“The subway station entrances were designed as a pair of sculptural structures; their height exceeding that necessary, to increase their visibility,” said Alsop.

Find out more about these Toronto-York metro stations › 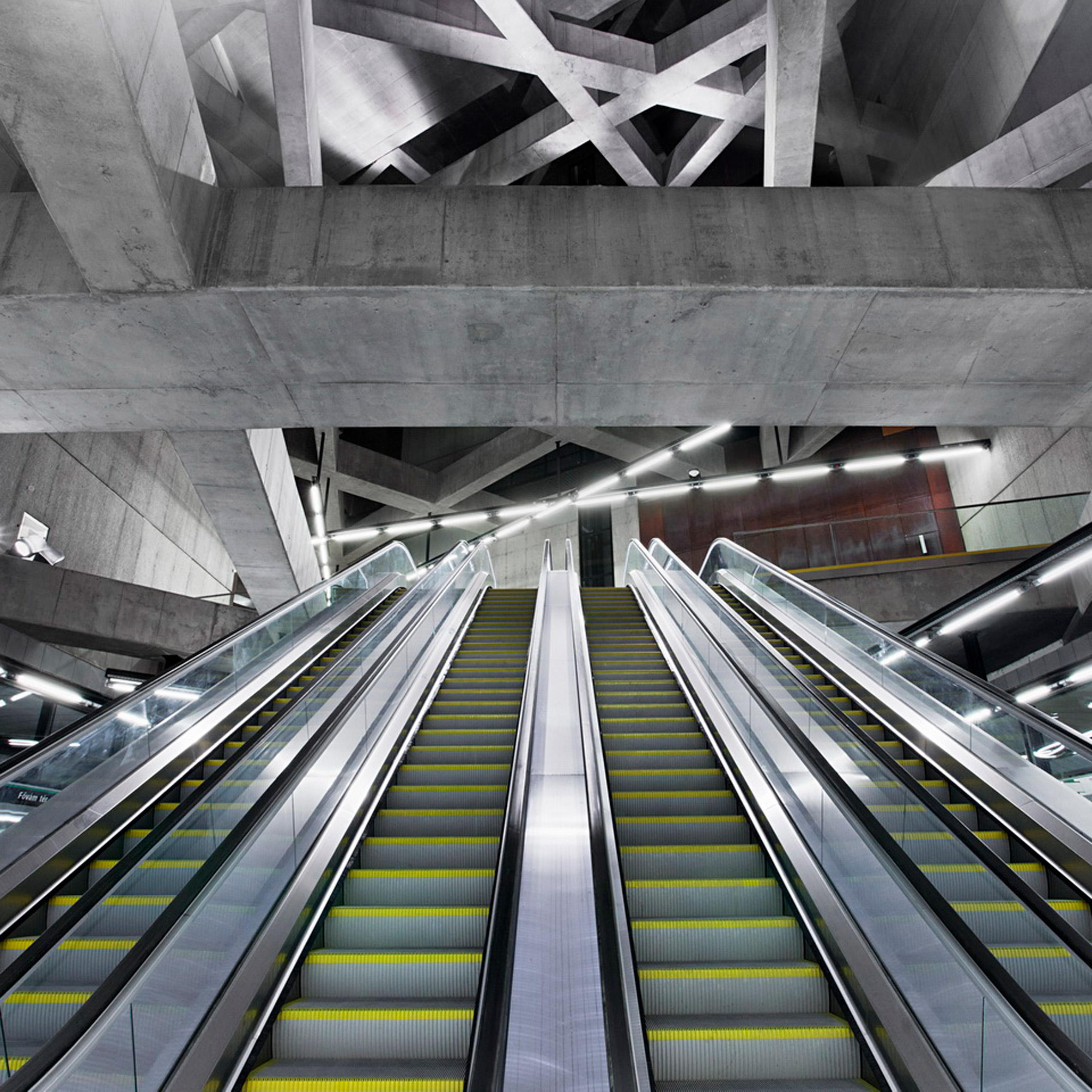 Daylight from street level was introduced into the stations through a construction method in which the spaces were excavated from top-to-bottom, rather than mined.

Find out more about these station on the M4 metro line ›

The post Ten 21st century underground railway stations from around the world appeared first on Dezeen.