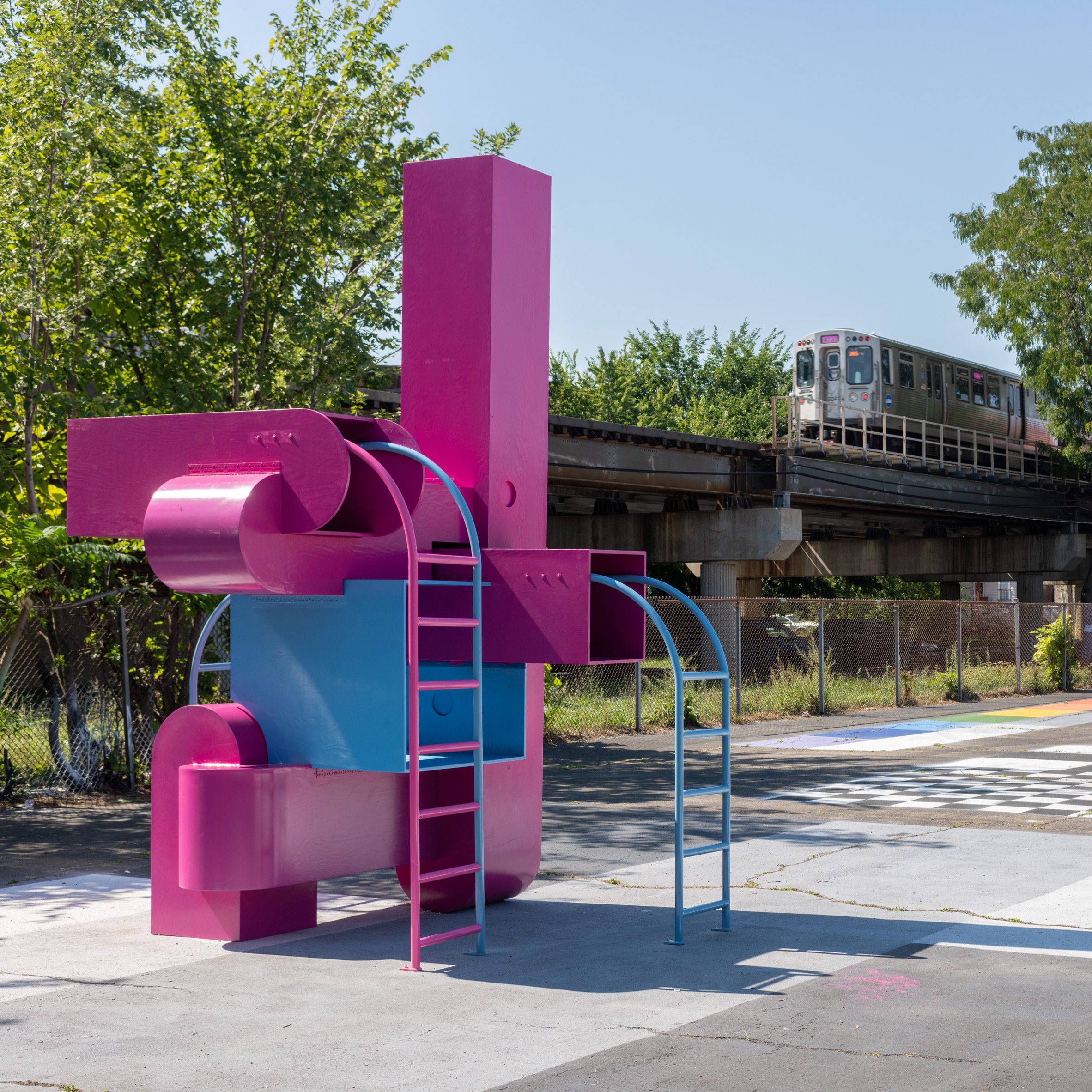 The Chicago Architecture Biennial has returned to Chicago for its fourth edition with installations by Atelier Bow-Wow and Manuel Herz Architects. Here are 10 must-see projects.

Curated by designer David Brown, the biennial contains contributions from over 80 participants hailing from more than 18 countries.

These include numerous site-specific installations, many of which have been built on empty lots across the city.

With the theme The Available City, this edition of the event intends to investigate who contributes to the design of Chicago, with projects from studios including Skidmore Owings & Merrill and Outpost Office. 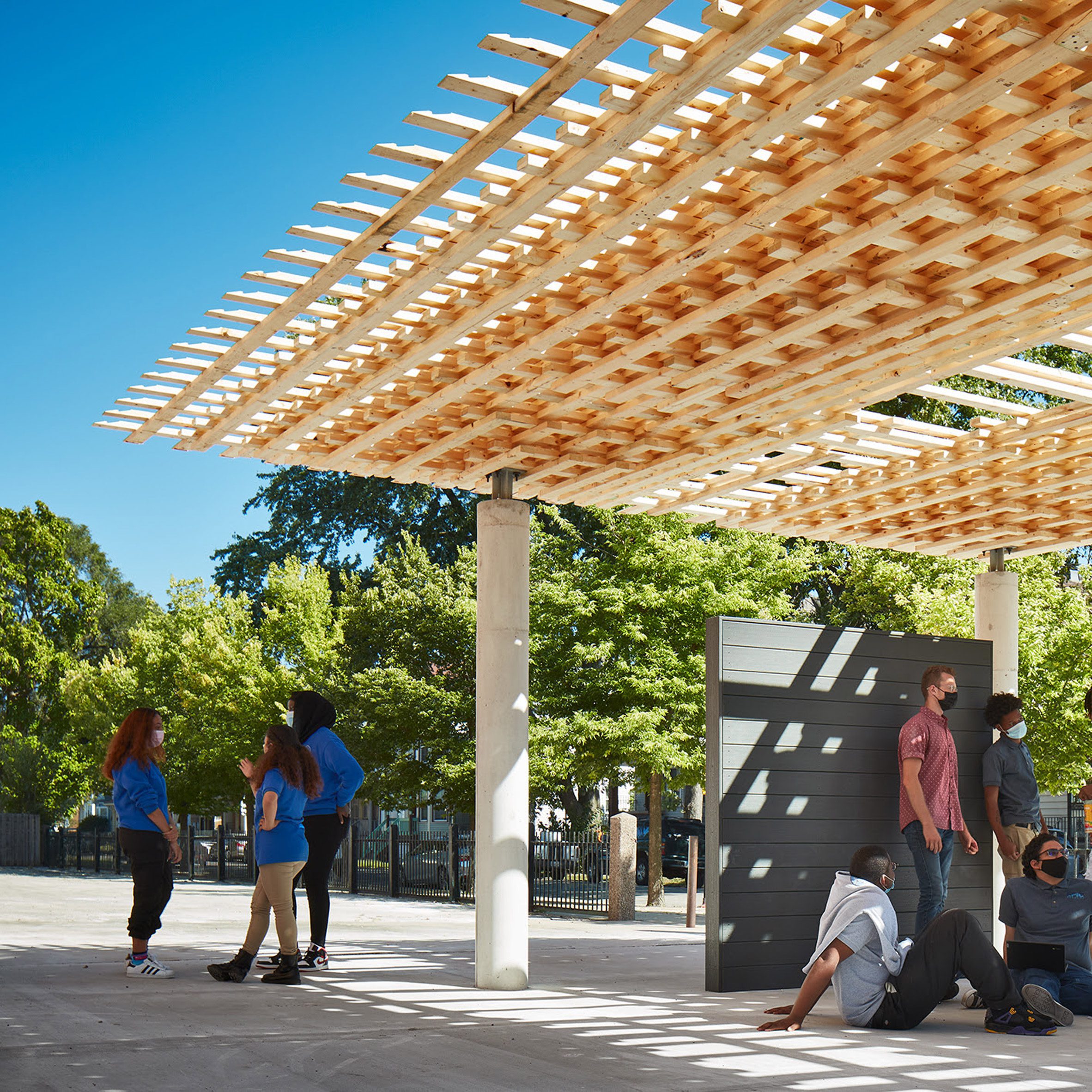 Architecture studio SOM worked with students to build an open-air learning lab and gathering space for the University of Michigan’s Taubman College of Architecture and Urban Planning in Chicago’s South Shore.

The pavilion was created as a prototype to demonstrate the possibilities of prefabricated timber framing to build large structures. 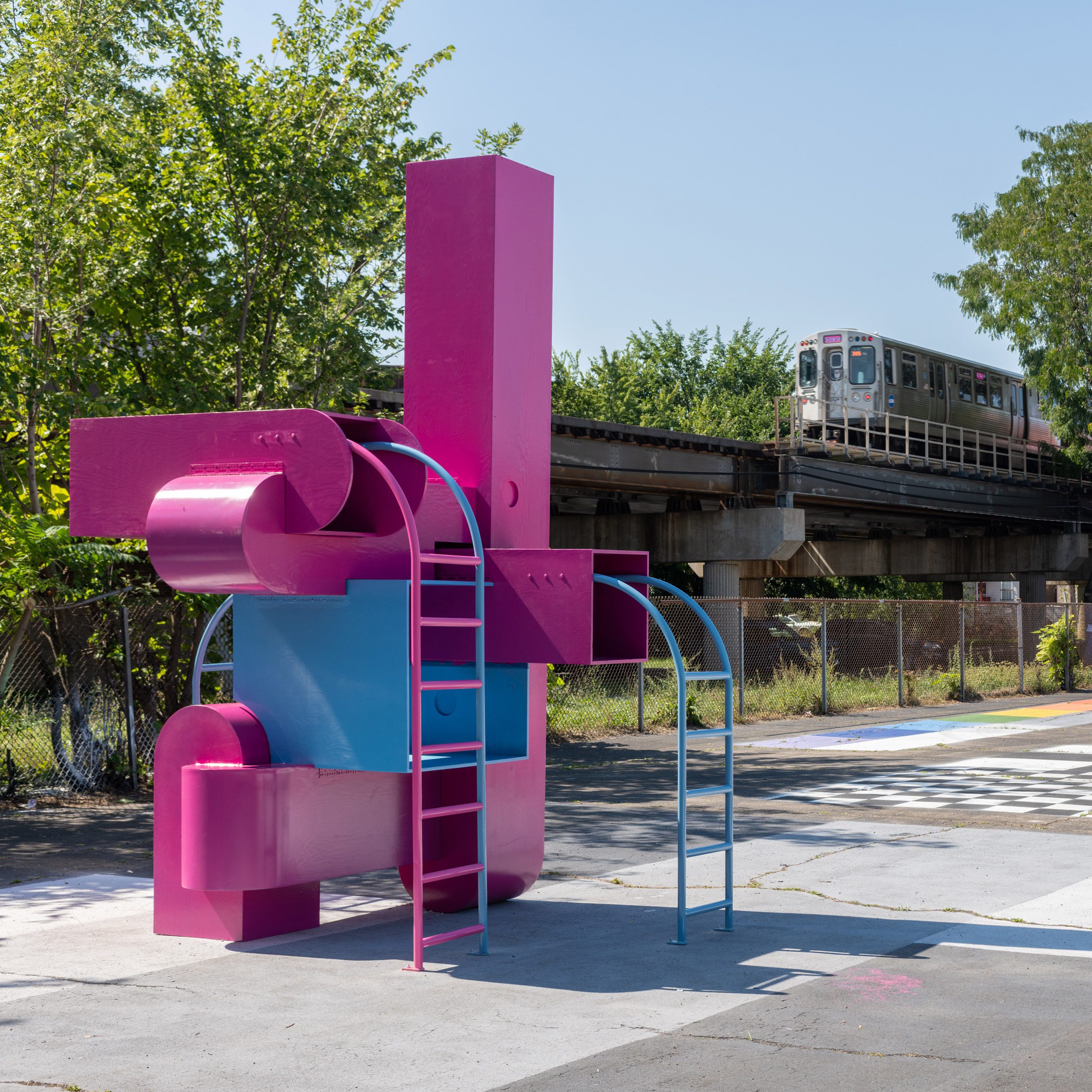 Studio Barnes created two structures on a plot in North Lawndale that are “born from Chicago’s rich history of annual block parties”.

The first is bright pink and blue and designed to recall the look and feel of a bounce house, or bouncy castle, which are often seen at block parties.

Alongside this, a second smaller structure made from a series of blocks will be used for social gatherings. 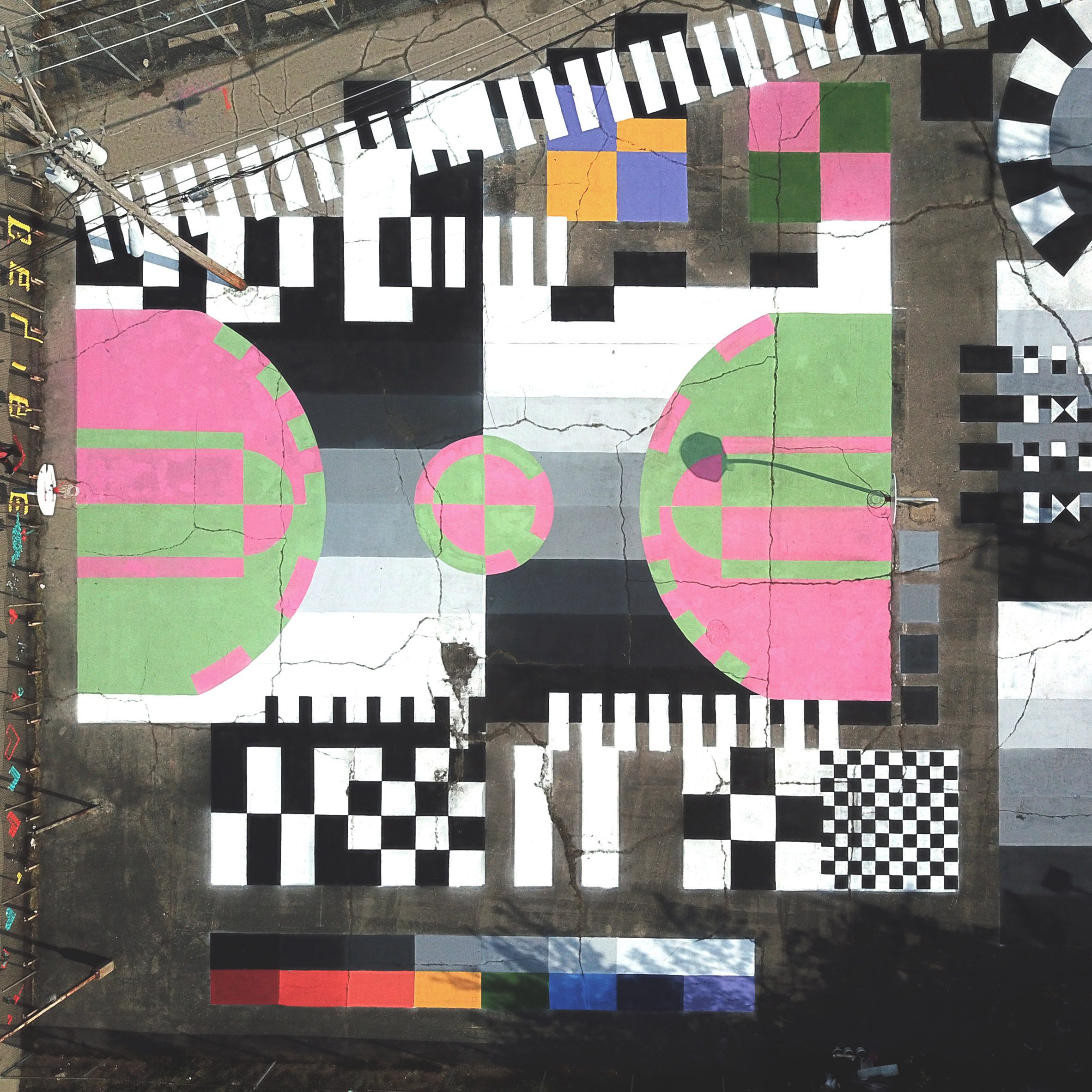 Cover the Grid by Outpost Office

Outpost Office has painted a series of plots in the North Lawndale and Pilsen areas of the city with “architectural-scale urban land paintings ” for its Cover the Grid installation. 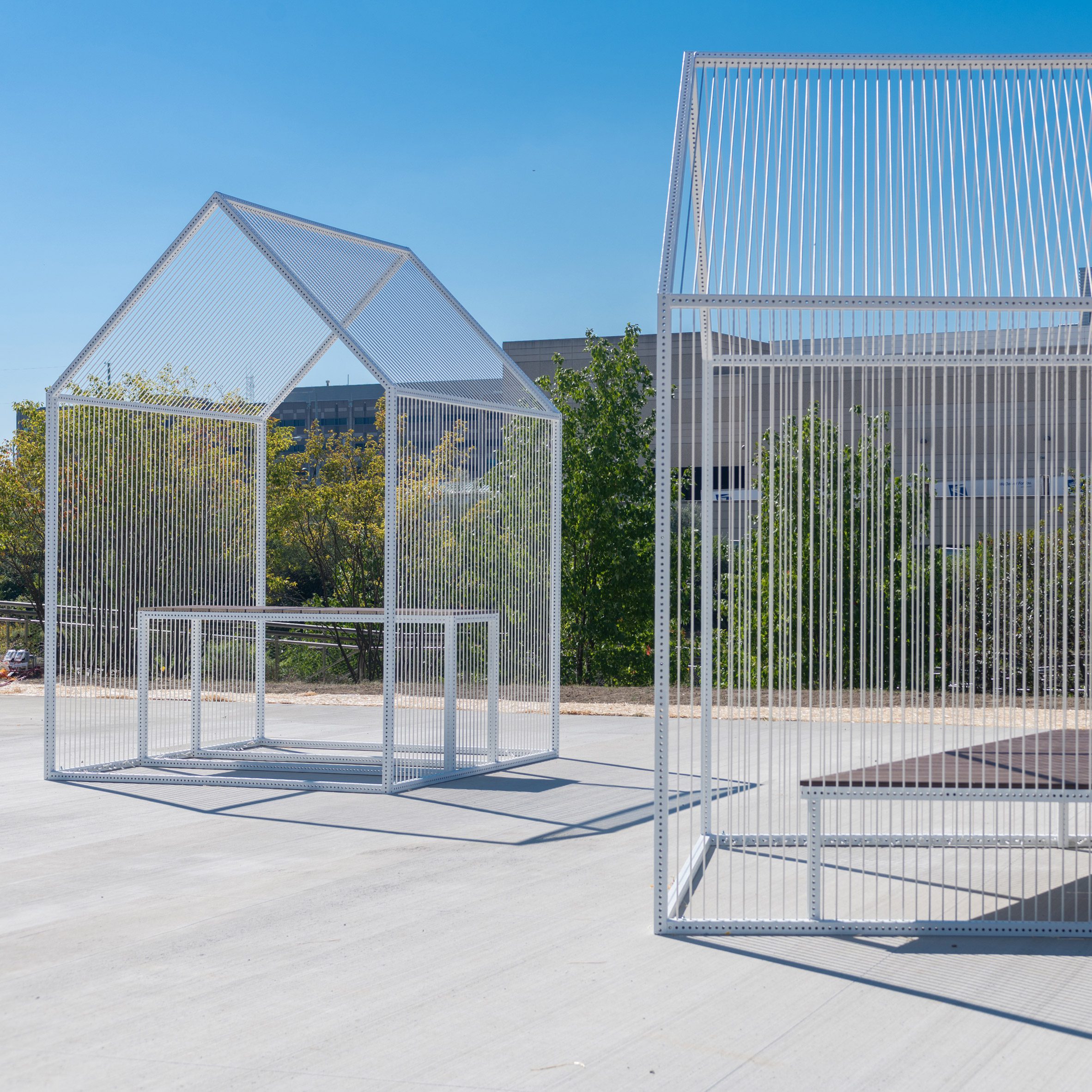 PORT’s River Frames aim to draw attention to the history of the installation’s site near Bertrand Goldberg’s River City apartments on the south branch of the Chicago River.

Set on a gravel walkway that outlines the footprint of the former Chicago Great Western Freight warehouse, which was demolished in the 1970s, are a group of steel-framed structures that “reflect the spartan warehouse structure that occupied Southbank Park for nearly a century”. 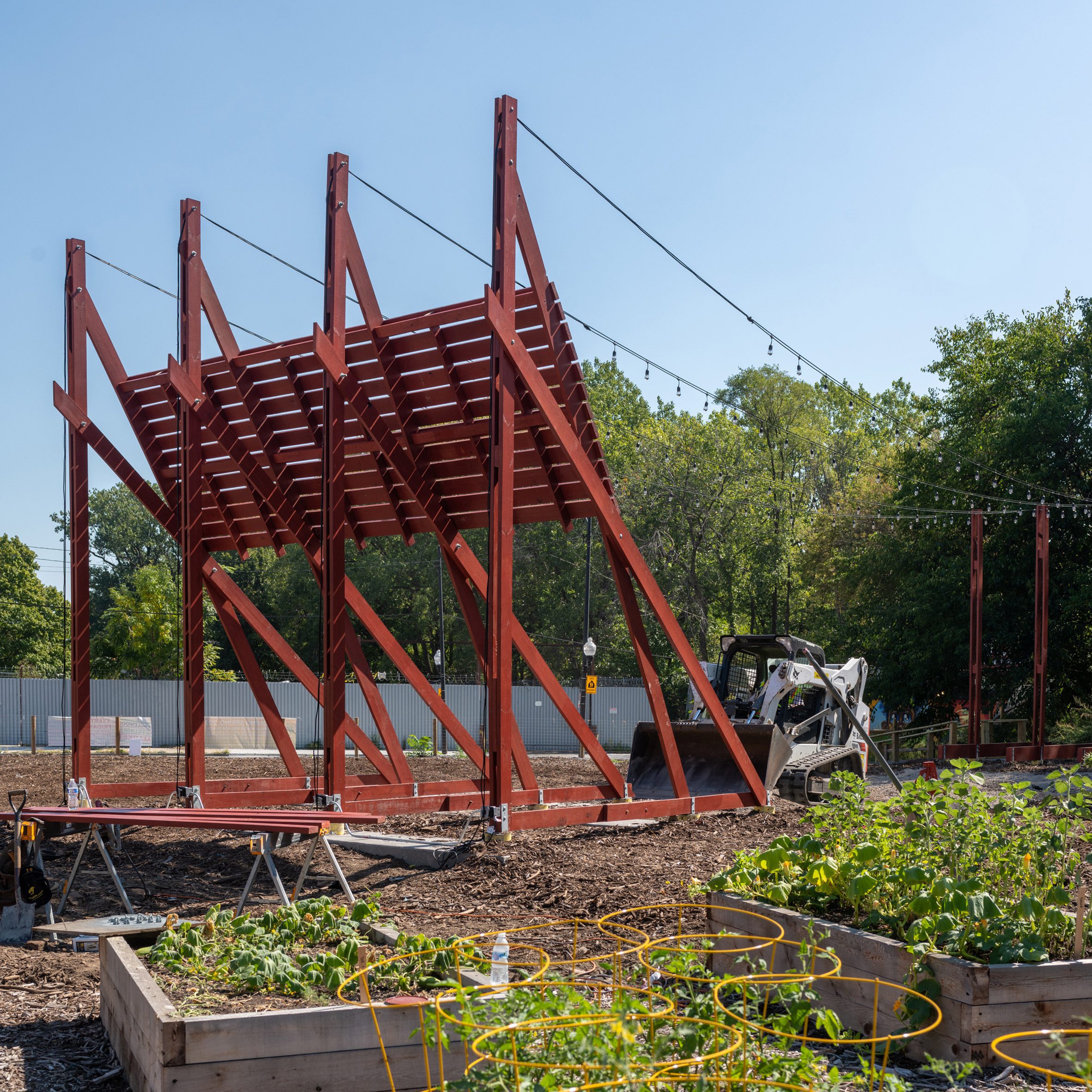 Tokyo-based architecture studio Atelier Bow-Wow is developing a pavilion and meeting space in a square marking the entry to Englewood Nature Trail on Chicago’s South Side.

The studio is creating a forty-person communal table, raised gardening beds, indoor growing houses and new office space as part of the project. 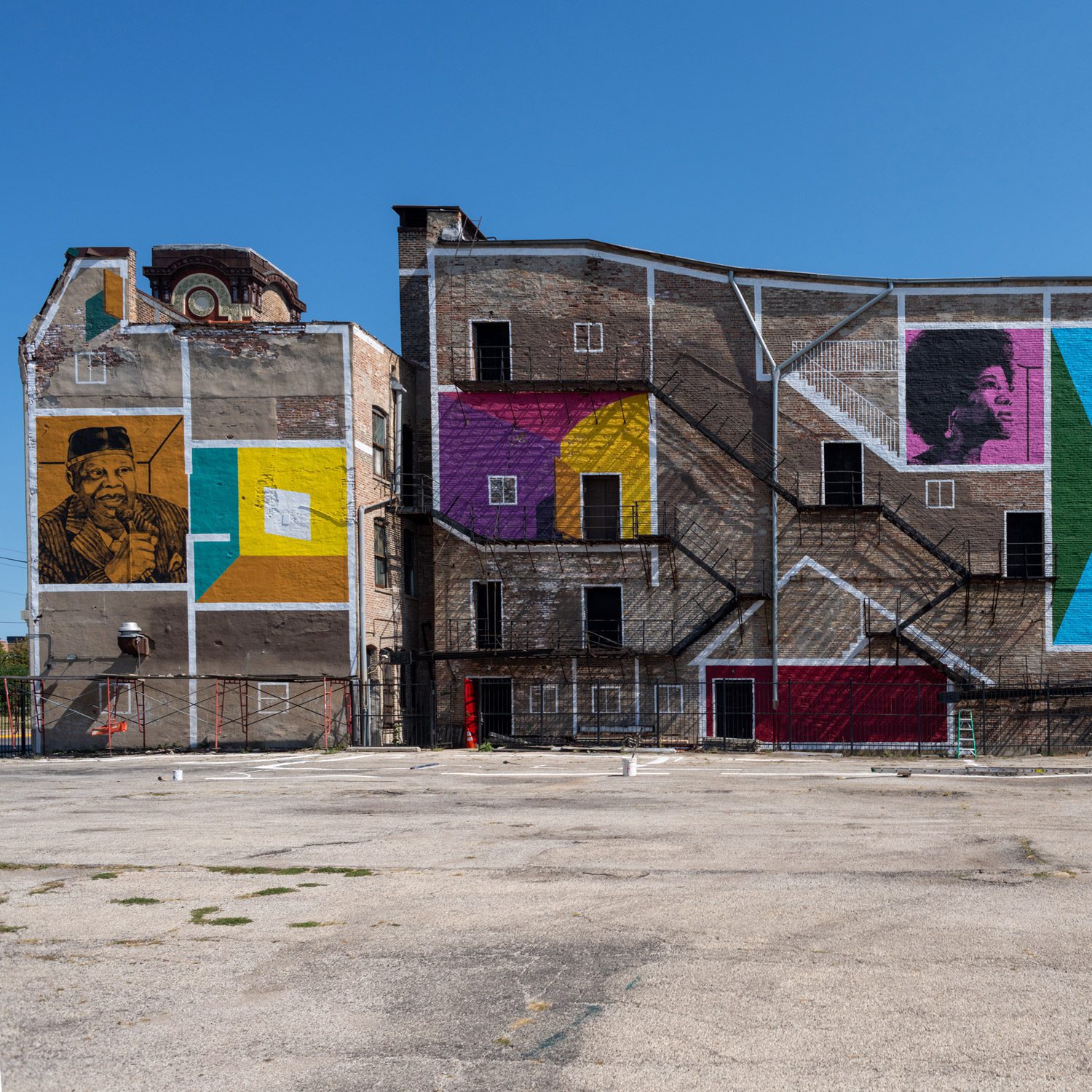 Swiss studio Manuel Herz Architects aimed to recall memories of the buildings that stood near the Central Park Theater in North Lawndale, which is currently being restored, for this installation.

A pattern based on floor plans and sections of the lost buildings has been painted across the building. 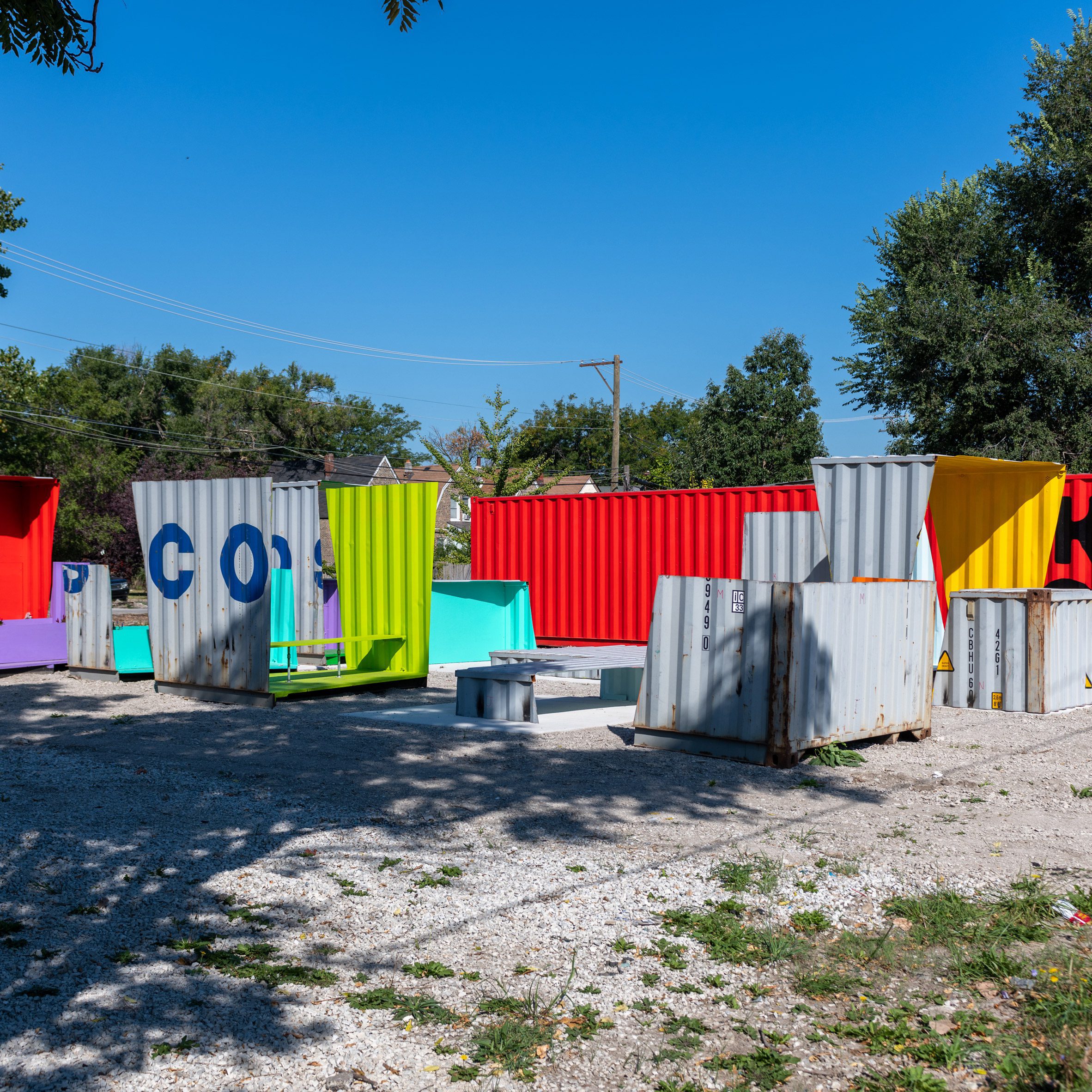 Sekou Cooke Studio’s contribution to the biennial is a series of structures that can be used as benches, tables, planter beds, retail stands and bike storage made from a cut-up forty-foot-long shipping container.

Named Grids + Griots, the installation was created in collaboration with youth organisation Young Men’s Educational Network (YMEN) and is located at its site in North Lawndale. 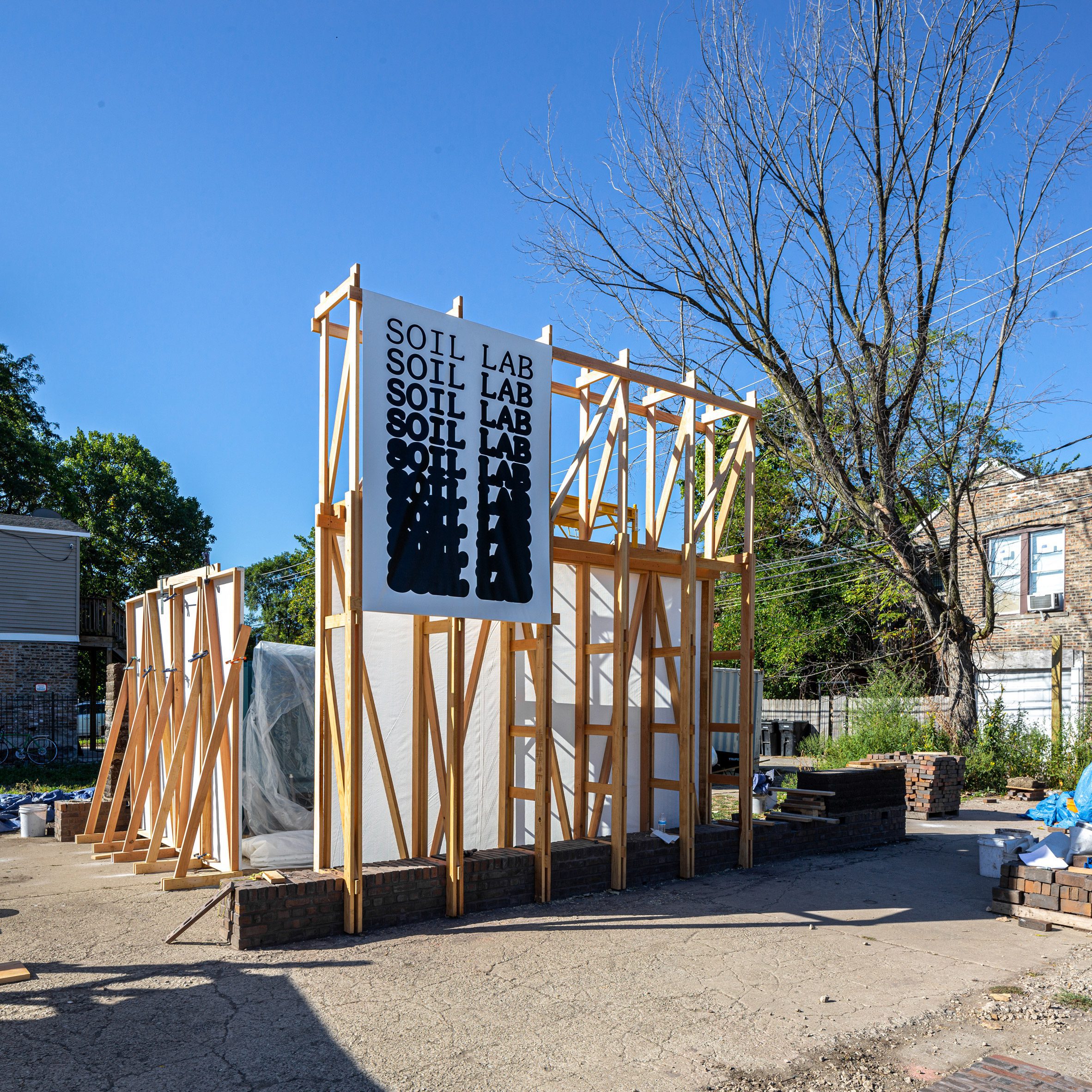 Set in the North Lawndale neighbourhood of Chicago, Soil Lab will see a series of structures constructed during the biennial.

Structures for social gathering will be made from bricks, rammed earth and ceramic tiles. 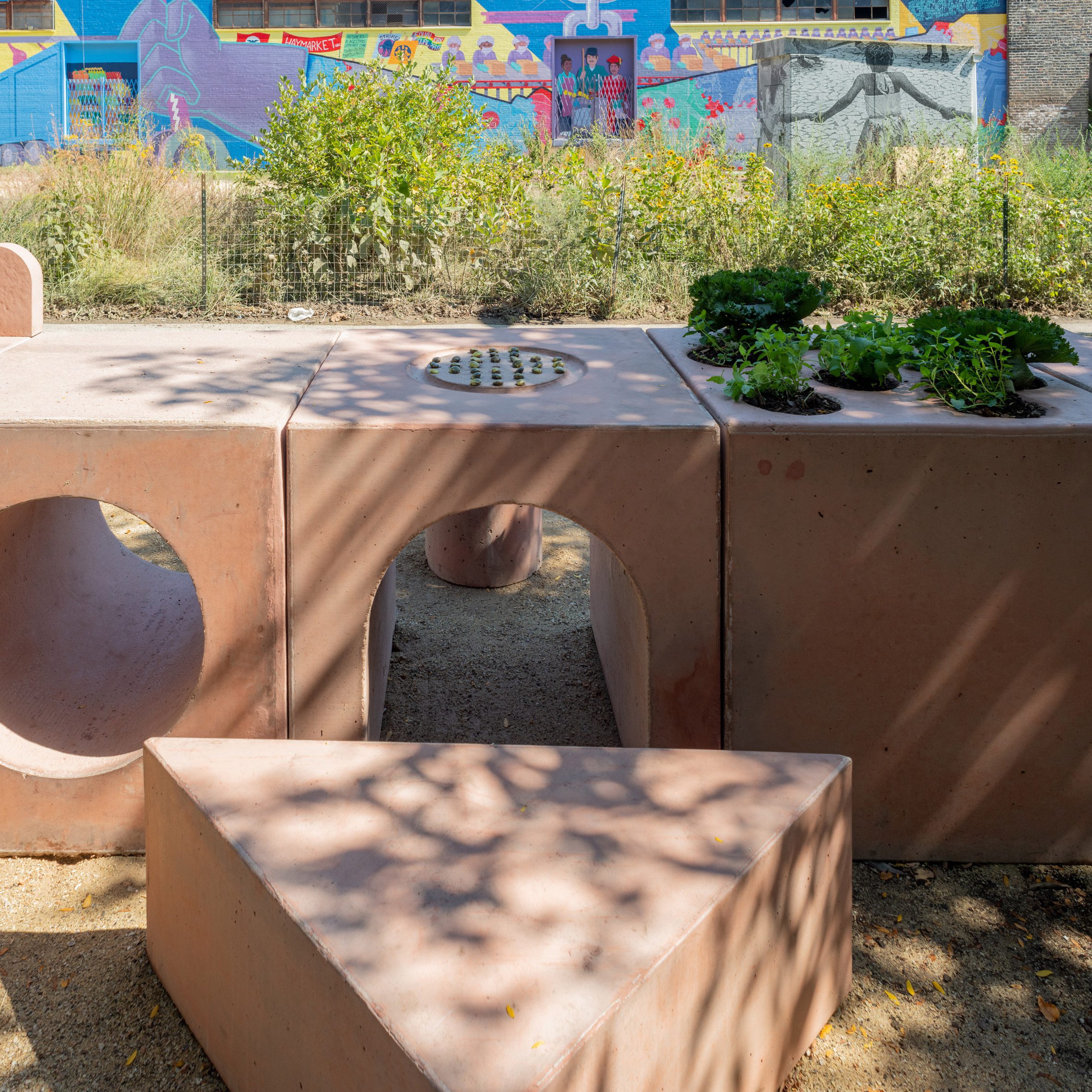 The Garden Table by Studio Ossidiana

Along with seating and table space, the permanent installation at the El Paseo community garden in Pilsen is topped with boards for playing marble solitaire, tic tac toe, backgammon and chess. 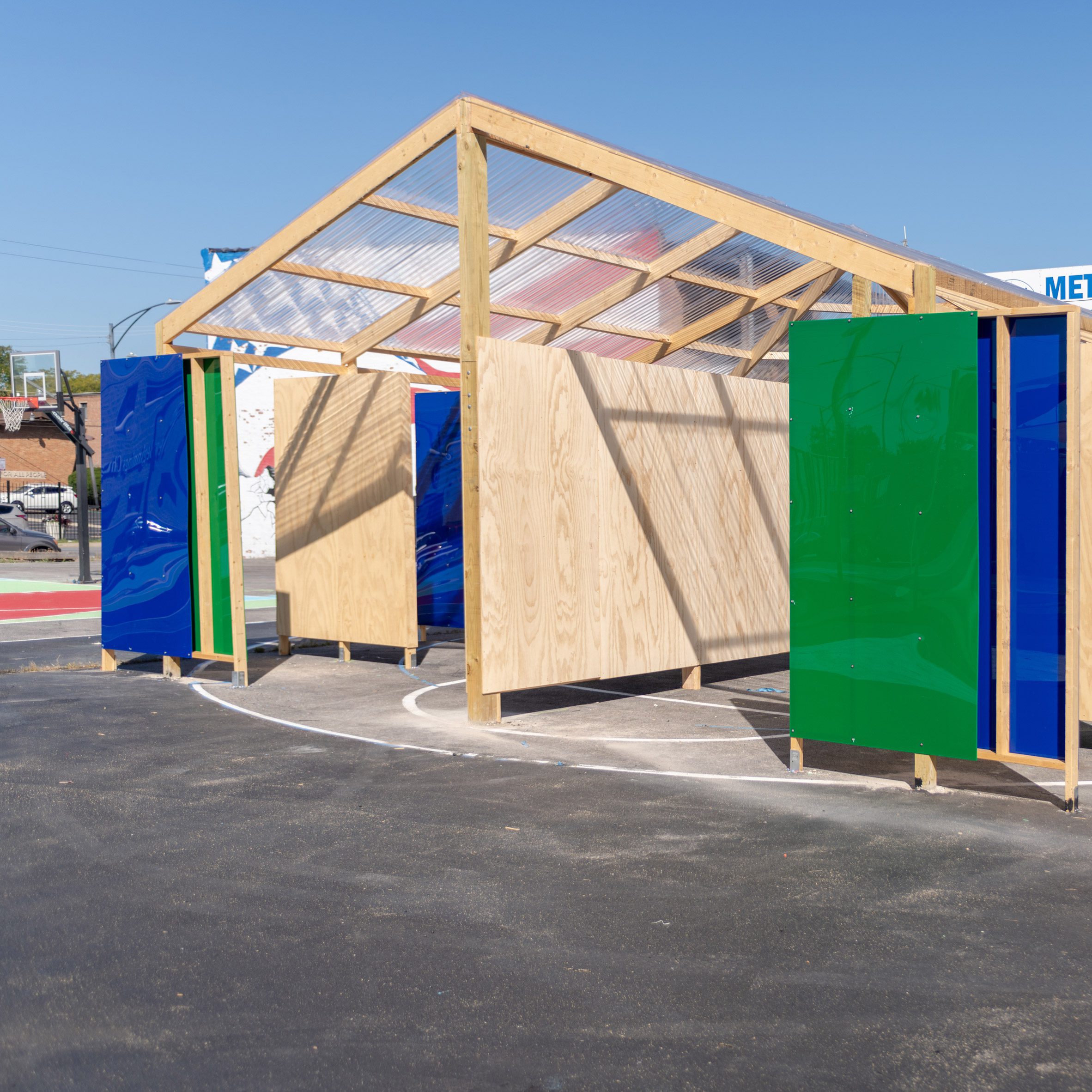 Erected in an empty lot opposite the New Beginnings Church, the temporary Woodlawn Canopies was created as a community space in collaboration with mentorship and training organisation Project HOOD (Helping Others Obtain Destiny).

Along with an interactive workspace and stage, an exhibition space has been built to showcase the history of Project HOOD.

The post Ten installations to see at the Chicago Architecture Biennial appeared first on Dezeen.