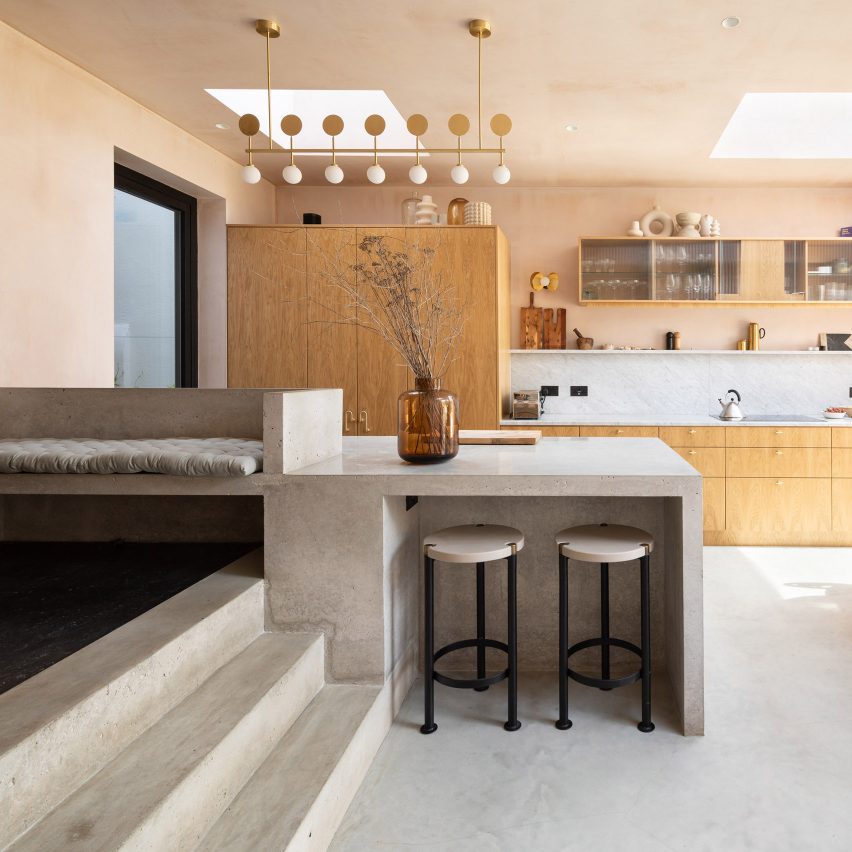 This lookbook highlights ten examples of peninsula kitchens, which have the functionality of kitchen islands but are a more space-saving solution.

Named after the geological feature, a kitchen peninsula is a spur that juts out from the wall or work surfaces, creating a three-sided surface. Peninsulas are often additionally used as breakfast bars for casual dining.

Peninsulas offer a space-saving solution for kitchens that don’t have enough floor space for a free-standing kitchen island. They are also useful in kitchens with irregular layouts since they can be asymmetrical or placed at jaunty angles.

They can also be used to create a useful staging post between the food preparation area and the dining area.

This is the latest roundup in our Dezeen Lookbooks series providing visual inspiration for the home. Previous kitchen-related roundups include kitchens with islands, galley kitchens and kitchens with breakfast bars. 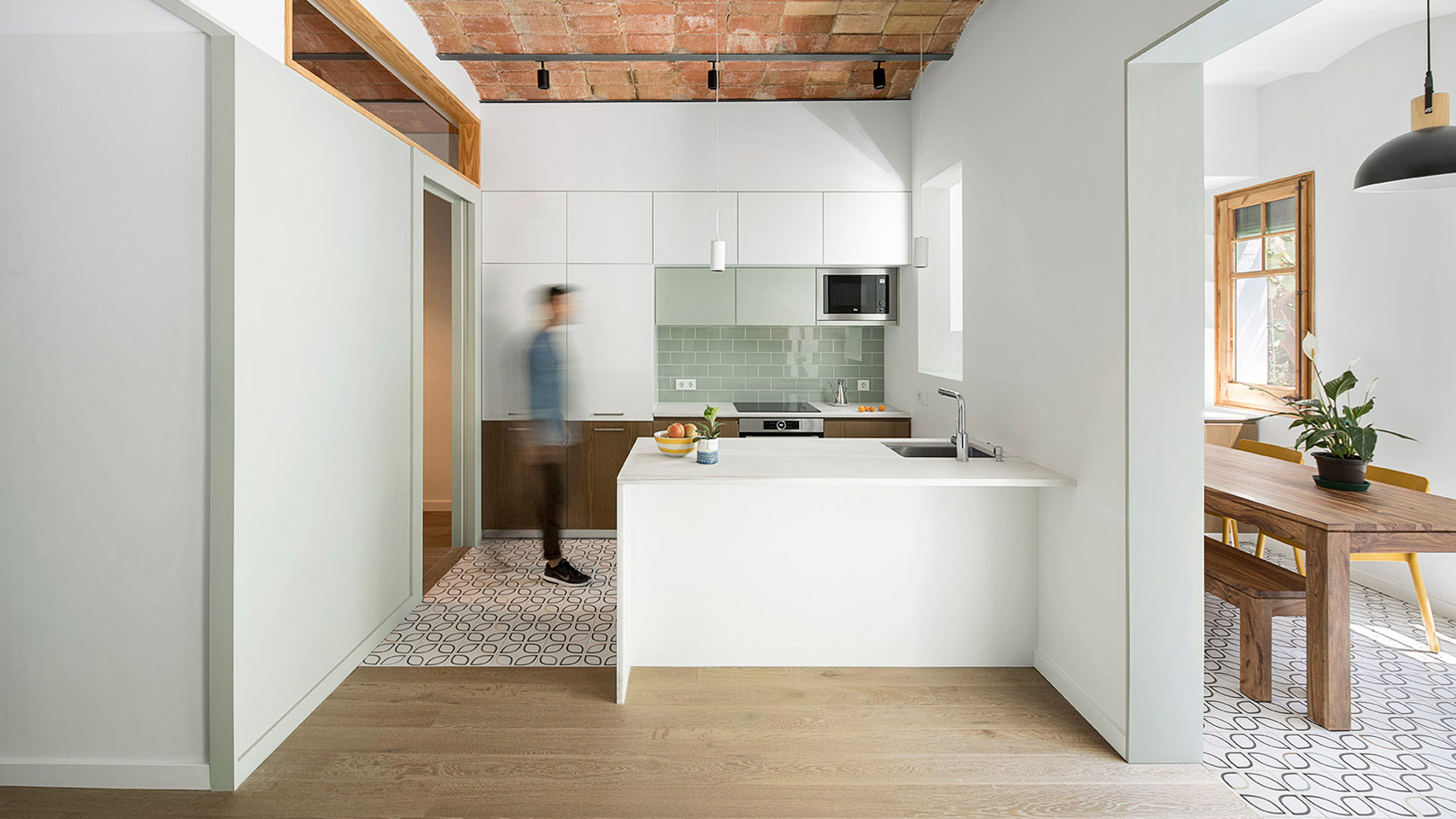 Nook Architects remodelled this 67-square-metre apartment in Barcelona to accommodate a family of three. A marble peninsula counter abuts the half-wall that divides the kitchen and the dining area.

A sink is sunk into the countertop at one end, and the marble surface overhangs to create a breakfast bar. Patterned tiles demarcate the kitchen area, which sits below a ceiling of traditional Catalonian brick vaults.

Find out more about Caldrap › The white kitchen cabinets are topped with steel while grey terrazzo picks out the counter end and splashback. 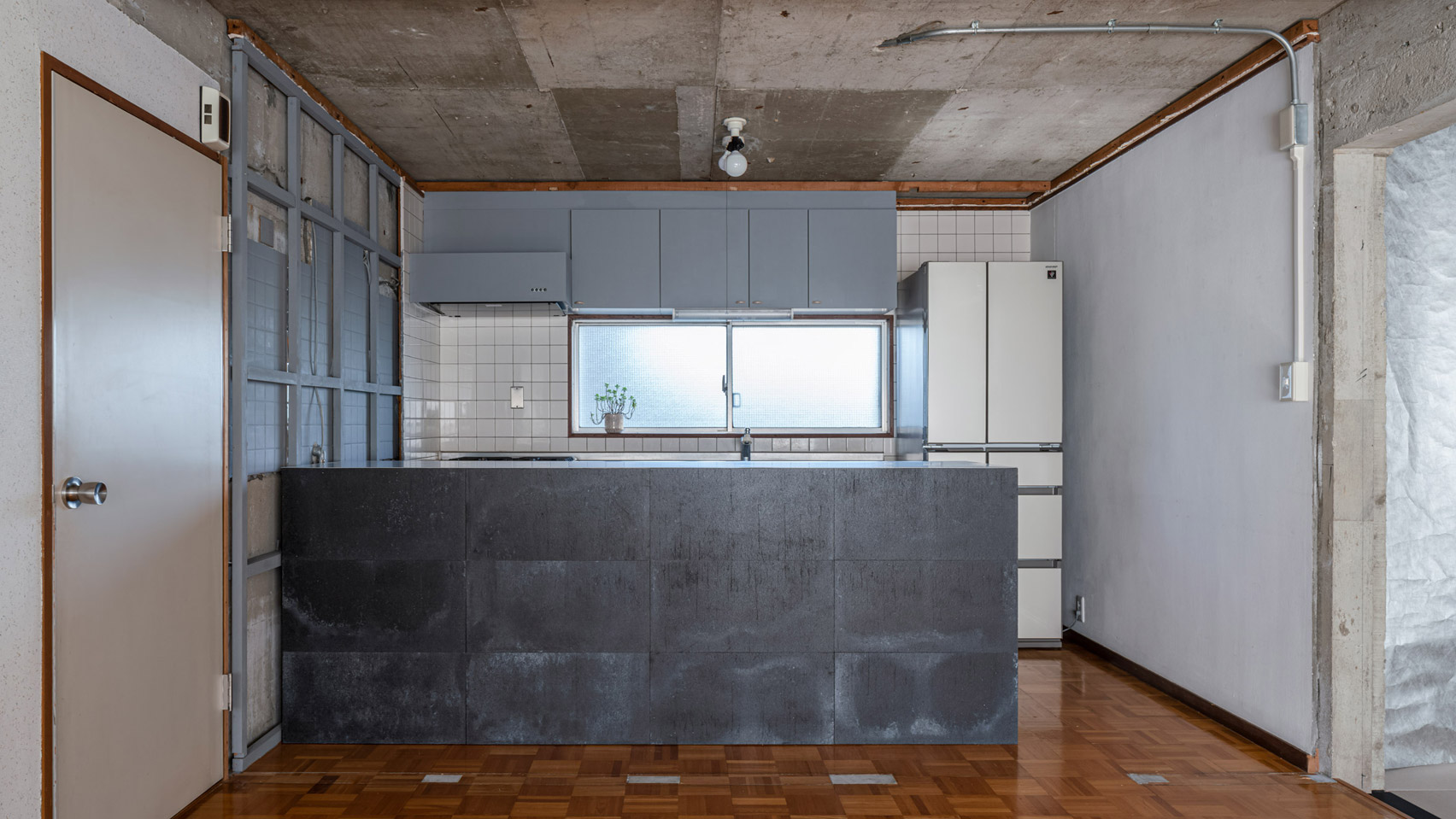 Reception House in Higashiyama in Nagoya, Japan, by Yuki Mitani and Atsumi Nonaka

Architects Yuki Mitani and Atsumi Nonaka redesigned their kitchen to create a more social space when they remodelled their own home. A peninsula kitchen counter creates extra counter space, while allowing the hosts to chat with their guests as they prepare meals.

The rental flat came with no finishes, just raw concrete walls, so the architects played up to this and clad the counter with panels of industrial-looking zinc.

Find out more about Reception House in Higashiyama › A bronze tap complements the creamy marble of this peninsula counter for an open-plan kitchen diner in a Polish apartment. Agnieszka Owsiany Studio designed the space to be as calming as possible for a couple with high-pressure jobs in medicine.

Wooden shelves are built into one side of the counter, which overhangs slightly so it can double as an informal breakfast bar with saddle-style bar stools ›.

Find out more about Botaniczna Apartment › 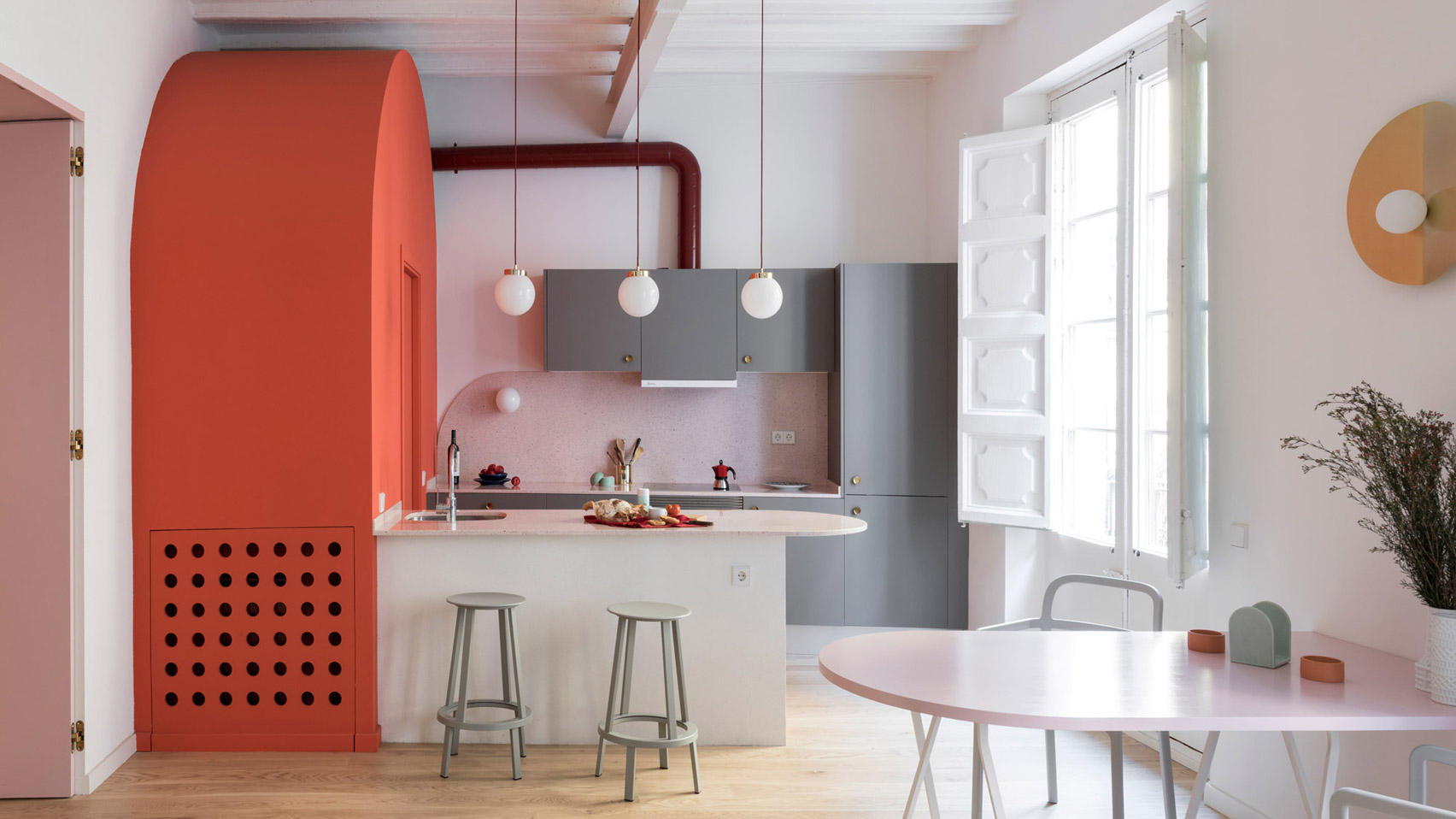 Apartment in Born in Barcelona, Spain, by Colombo and Serboli Architecture

A curved countertop projects to form a breakfast bar in this colourful flat renovation by Colombo and Serboli Architecture for a woman working in the fashion industry.

The countertop abuts a bright coral arched volume that hides a guest bathroom. A polished metal tap curves over the sink on the kitchen side and two grey Revolver Stools from Hay can be drawn up to turn the surface into a breakfast bar.

Find out more about Apartment in Born › 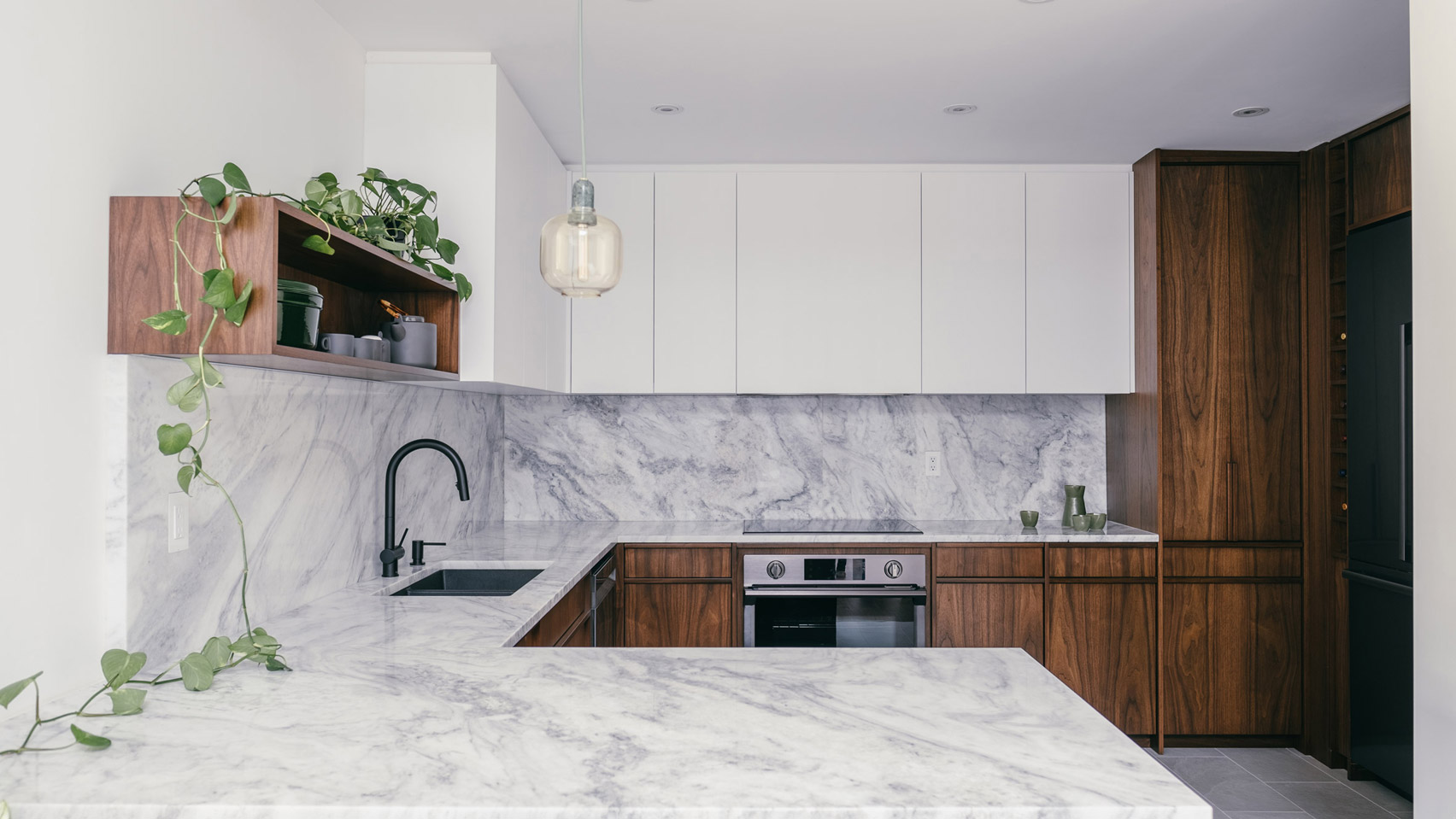 Canadian studio Odami opened up the previously enclosed kitchen of a dated 1980s apartment in Toronto. The peninsula kitchen adds more worksurfaces while creating a line of sight with the dining area.

Matching grey marble countertops and splashback contrast with the dark wood cabinetry and a matt black sink and tap.

Find out more about St Lawrence › 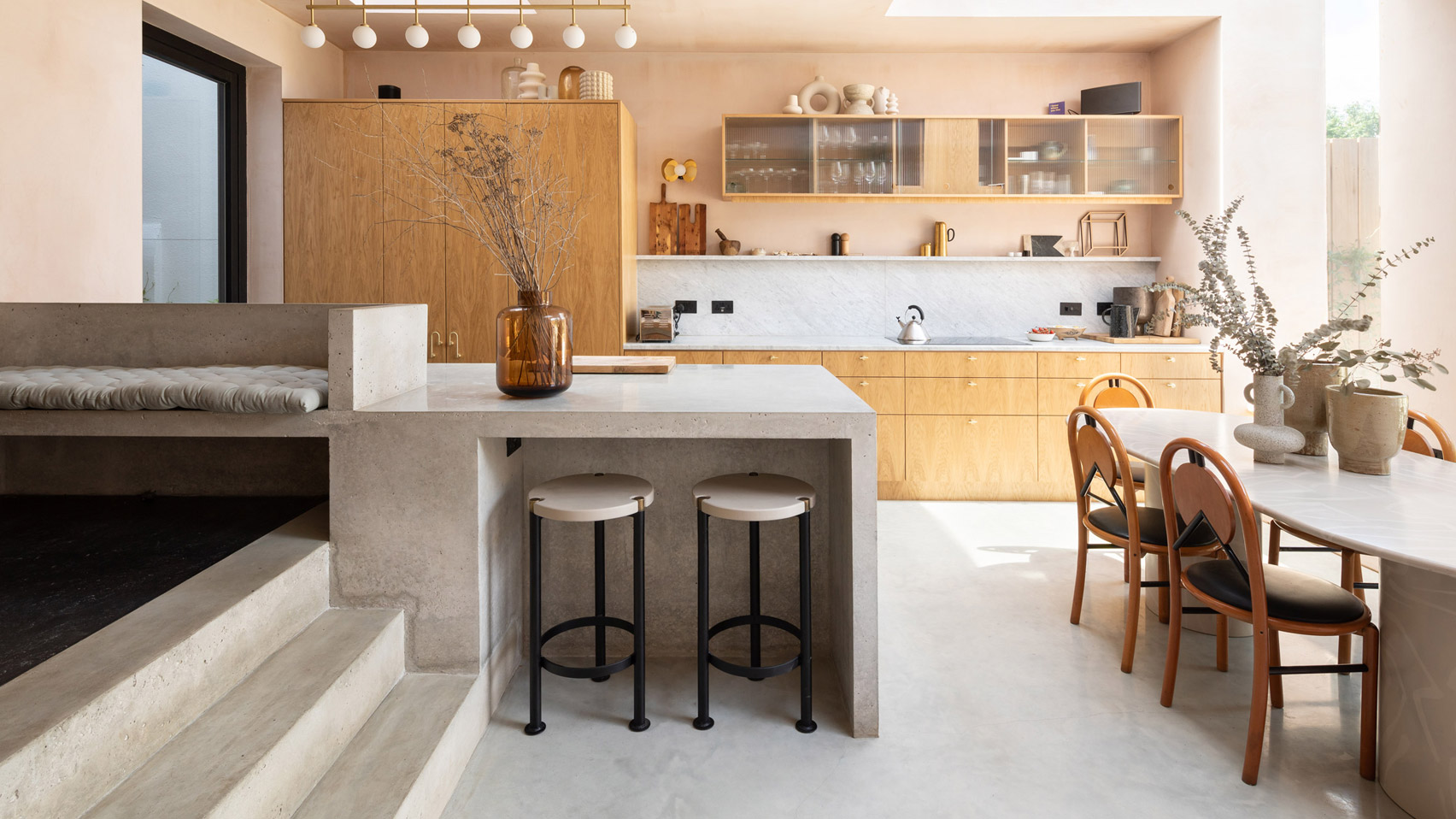 Architecture practice Fraher & Findlay introduced a Japanese aesthetic during the renovation and extension of this Victorian-era house in London.

The kitchen features pink plaster walls and a peninsula-style polished concrete counter that also serves as a breakfast bar and continues up a short flight of steps to form a bench seat.

Find out more about Tsubo House › Cabinette in Valencia, Spain, by Masquespacio

A row of retro-futuristic stools with tiered fringing from Spanish studio Masquespacio’s Déjà-Vu collection line up below the bar of this peninsula kitchen in a co-working space in Valencia.

Find out more about Cabinette › 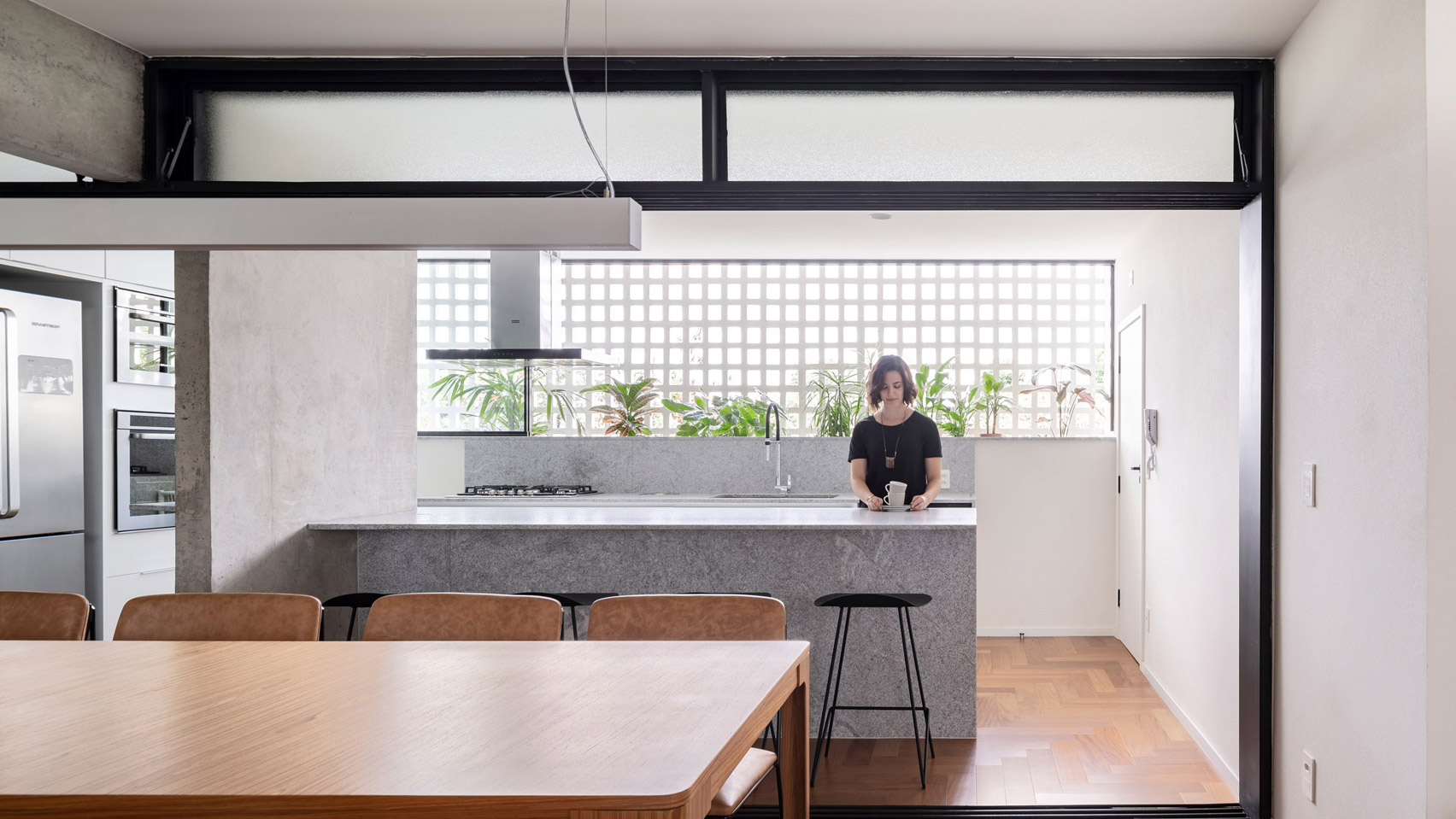 Bloco Arquitetos reconfigured this 1960s apartment in Brasilia, adding translucent sliding doorways that can be pulled across to separate the kitchen and the dining area.

The peninsula kitchen with its marble counter abuts a concrete divider wall and allows the kitchen and dining room to become one large entertaining space when the doors are open. 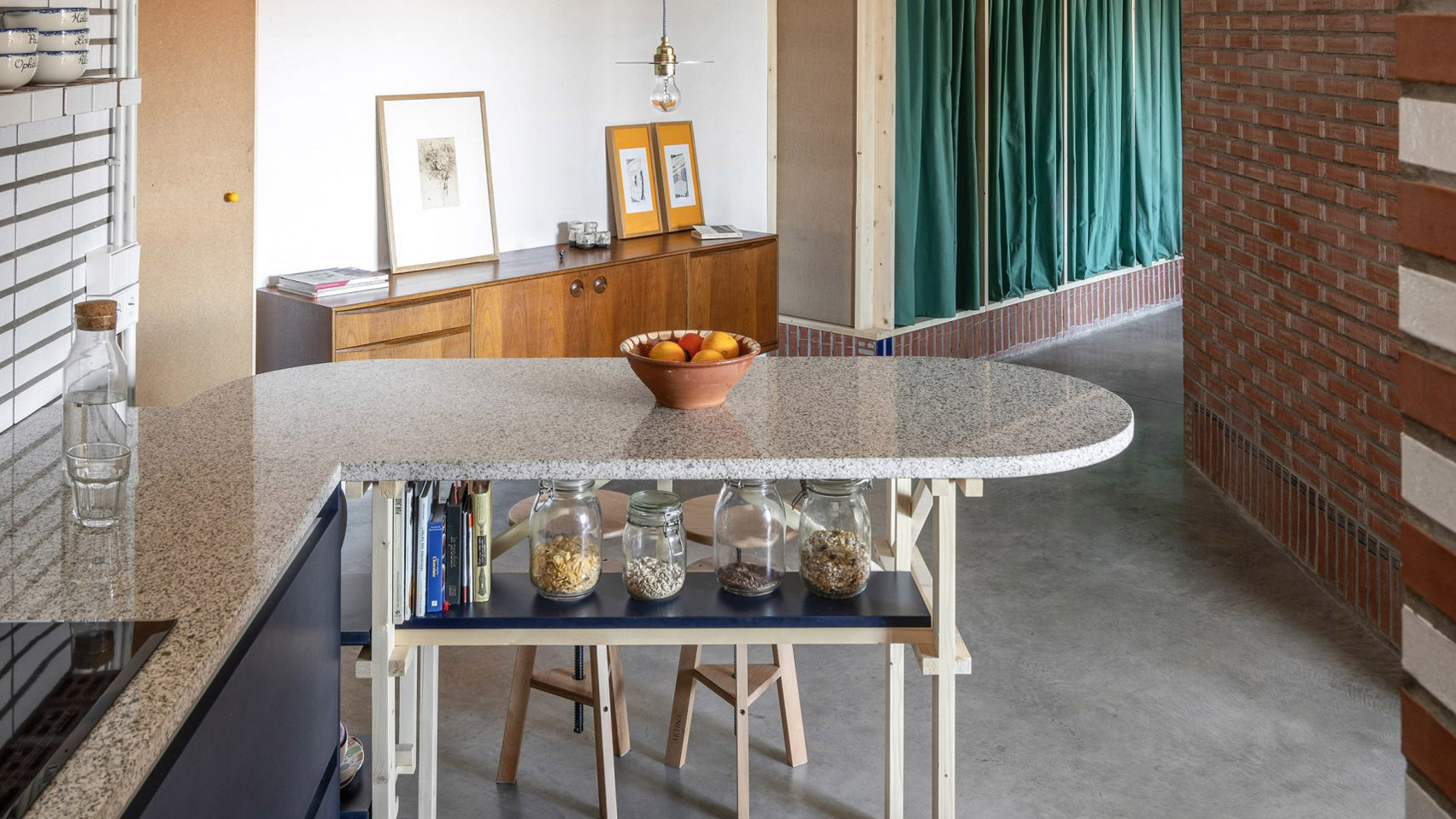 Spanish architecture studio Nomos converted an old workshop into a home for two of its partners. The original pipes and brickwork are still visible in the kitchen, which has a rounded peninsula counter supported by a wooden frame.

Nomos built the custom timber elements out of pine, including the frame and the bar stools. A blue-painted shelf under the counter doubles as a handy spot to store breakfast cereals and cookbooks.

Find out more about La Nave ›