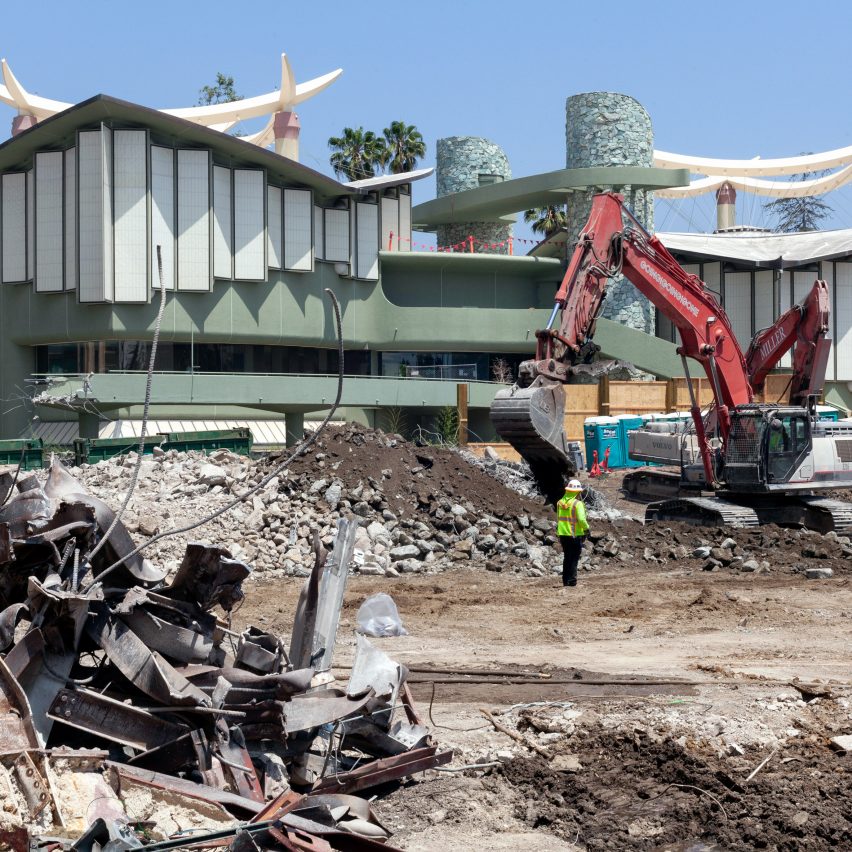 With the demolition of Los Angeles County Museum of Art underway for Peter Zumthor’s redesign, Mimi Zeiger is concerned about what will be left for the city and its residents following coronavirus lockdown.

“LACMA belongs to the people of Los Angeles County and it should reflect the tremendous diversity, creativity, and openness to change that can be found here,” reads a headline on the buildinglacma.org, a website ostensibly tracking the design and construction of the controversial, squiggle of a proposal by Swiss architect Zumthor.

Such marketing copy, written the voice of Los Angeles County Museum of Art (LACMA) director Michael Govan, is meant to rally support (public and financial) under a banner of shared values. But that last phrase – openness to change that can be found here – is suspect on two accounts.

While all but the most essential workers were home under shelter-in-place orders, demolition crews began

In a time of semi-facts and dog whistles, “openness to change” is a riposte to the public campaigns and individuals advocating to preserve the original buildings or, at least, seriously reconsider a $650-million (£523-million) design that reduces the museum’s gallery square footage by up to 10 per cent yet willfully spans Wilshire Boulevard with the aplomb of a pedestrian overpass.

By suggesting opponents are closed-minded or stuck in the past, the website’s language throws shade at those who had hoped that critical essays and advertisements in the Los Angeles and New York Times would slow down the inevitable destruction of four buildings on the museum’s campus.

“Found here” presents a different shade of the truth. In April, while all but the most essential workers were home under shelter-in-place orders, demolition crews began tearing down the three structures by LA modernist architect William Pereira that were part of the original 1965 scheme, as well as the never-loved 1986 addition by Hardy Holzman Pfeiffer Associates. As of last week, the museum’s Bing Theater reduced to a pile of debris.

The real truth is that there’s no longer a “here” there. Bruce Goff’s beautifully weird Japanese Pavilion overlooks a hole and an excavator.

Whether one supports Zumthor’s design, grieves for the Pereira buildings, or neither (like me), the cruelness of demolishing LACMA, a significant piece of LA architecture, at a moment when Angelenos are unable to bear witness should not be ignored.

The Covid-19 pandemic has put necessary pause on civic life. We can’t congregate, we can’t go to museums, yet our expectations remind us that this contraction from of the public sphere is only temporary. At some point in the near future we will put on real pants and emerge to find chunks of cultural infrastructure gone.

Half of LACMA will be erased. The LA County budget that underwrites $125 million (£100 million) of the new building’s cost will be in tatters. Funders will be gun shy. And all we will be left with is the museum’s ambiguous future in the form of a construction shed surrounding a ditch seeping tar.

Govan, of course, doesn’t share such belief in LACMA’s uncertainty. In a 9 April project update on LACMA’s website, he expressed confidence in construction staying on schedule and funders committed to the project, writing “our new building is a powerful and visible signal to Los Angeles of renewed vitality and an engine for recovery after this crisis”.

But the museum as hole in the ground is symbolic of the shuttering of other cultural outlets and canceled public programing. It’s impossible to predict which galleries and arts organisations will have the funds to reopen.

Over the course of his 14-year tenure at LACMA, Govan succeeded in making the museum campus more than a destination for blockbuster shows and selfies in front of Chris Burden’s Urban Light. The architecture, new and old, was pretty mediocre, but Angelenos would hang out there, listen to music, grab a coffee. Activities that showed proof of concept for a renewed civic life in a city that is often falsely portrayed as having none.

These days, the ideas of “museum as destination” and “experience” often overshadow more old-fashioned notions of “civic identity” or “pedagogy”. Each one of these four concepts get pretty wobbly under the gaze of decolonisation, when the onus for one institution (or one building) to represent plurality is shaky at best. But LACMA’s mash-up of structures on Wilshire Boulevard in Hancock Park offered informality and in-between space rather than heroic unity.

As a director skilled in bridging the worlds of Hollywood industry and the global art scene, Govan redefined LACMA through the lens of contemporary art and effectively obscured its roots as an encyclopedic museum. Especially with the openings of two additions: the Broad Contemporary Art Museum building in 2008 and the Resnick Pavilion two years later.

Both buildings by Renzo Piano will be incorporated into the Zumthor campus redesign and both reflect an ambient museum architectural aesthetic: big boxes housing well-lit and endlessly flexible galleries.

In thinking about what LACMA and its wide-ranging permanent collection means for Los Angeles, writer and independent curator Greg Goldin touches on the founding of the county’s first museum of art and natural history in 1913, a Beaux-Arts structure in Exposition Park that would later evolve into to the art museum and the city’s Museum of Natural History.

“LACMA grows out of Los Angeles as a city that was coming onto its own and making its own identity,” he explained. “LA wasn’t going to be a reflection of itself, we could look outward at other cultures and see how those cultures were reflected our own. It was a move away from provincialism and towards cosmopolitanism.”

Goldin, along with architecture critic Joseph Giovannini, co-chairs of The Citizens’ Brigade to Save LACMA. The activist group is petitioning museum trustees and Los Angeles county and city officials to stop demolition and revisit plans.

Products of a three-week charette, the schemes aren’t particularly great. Then again, neither is Zumthor’s

In late April, the Citizen’s Brigade announced the winners of an ideas competition to redesign the museum. Entitled LACMA not LackMA, a dig at the reduced square footage of the Zumthor scheme, the selection of six finalists is meant to show a widening of possible futures for the site and critique the lack of public review and input that has marked Govan’s process.

The winning designs for LACMA’s East Campus include entries from Coop Himmelb(l)au, RUR Architecture, and Reiser + Umemoto, among others. Some are more expressive – Coop Himmelb(l)au’s features a bubble to rival the Academy Museum’s sphere – and others practical.

Artists, architects, Angelenos all have vested interest in the future of the campus

Paul Murdoch Architects, the only LA-based finalist, proposed a multi-story glazed box resembling a department store. Products of a three-week charette, the schemes aren’t particularly great. Then again, neither is Zumthor’s. He’s had seven years.

Still, there is something hopeful, even resilient in seeing more concepts for LACMA rather than continuing an exhausting debate over the merits of a single design. Govan’s efforts to push forward his vision denied the public a process to reimagine architecture that represents the culture of LA today.

Artists, architects, Angelenos all have vested interest in the future of the campus, its potential to inspire creativity and foster civic life. While we all sit at home imagining the moment when we can once again flock to art openings, concerts, and coffees with friends, I doubt anyone is dreaming of a hole.

Photography is by Monica Nouwens.

Mimi Zeiger is a Los Angeles-based journalist and critic. She has covered art, architecture, urbanism and design for a number of publications including The New York Times, Domus, Dwell, Architects’ Newspaper, and Architect.

The post "The cruelness of demolishing LACMA when Angelenos are unable to bear witness should not be ignored" appeared first on Dezeen.